Grand Canyon of the Tuolumne V-V+

Sitting around campfires during California expedition boating, unscoutable, unportageable gorges are often brought to the topic, and two invariably come to the forefront. One is the famed Crucible of the San Joaquin, and the other is the Muir Gorge of the Tuolumne.

Muir Gorge isn’t nearly as well known, nor is the beta nearly as substantial, consisting simply of “when you get to the unscoutable, unportageable rapid, run it ten feet of the left wall”. Our nerves were slightly on edge because when previously run by the Southerners, a portage was done by climbing down wet rocks in the middle of the "sieved out boulder pile". We didn’t know if the rapid had changed since the old beta, or if it cleaned up at high flows. What we did know was that with double the flows we wouldn’t be portaging down the middle of anything. With this in mind, and wanting to stay near river level, we put on the river with six days of food, and pushed to Muir Gorge on day one, so we were in good shape.


The entrance to Muir Gorge. 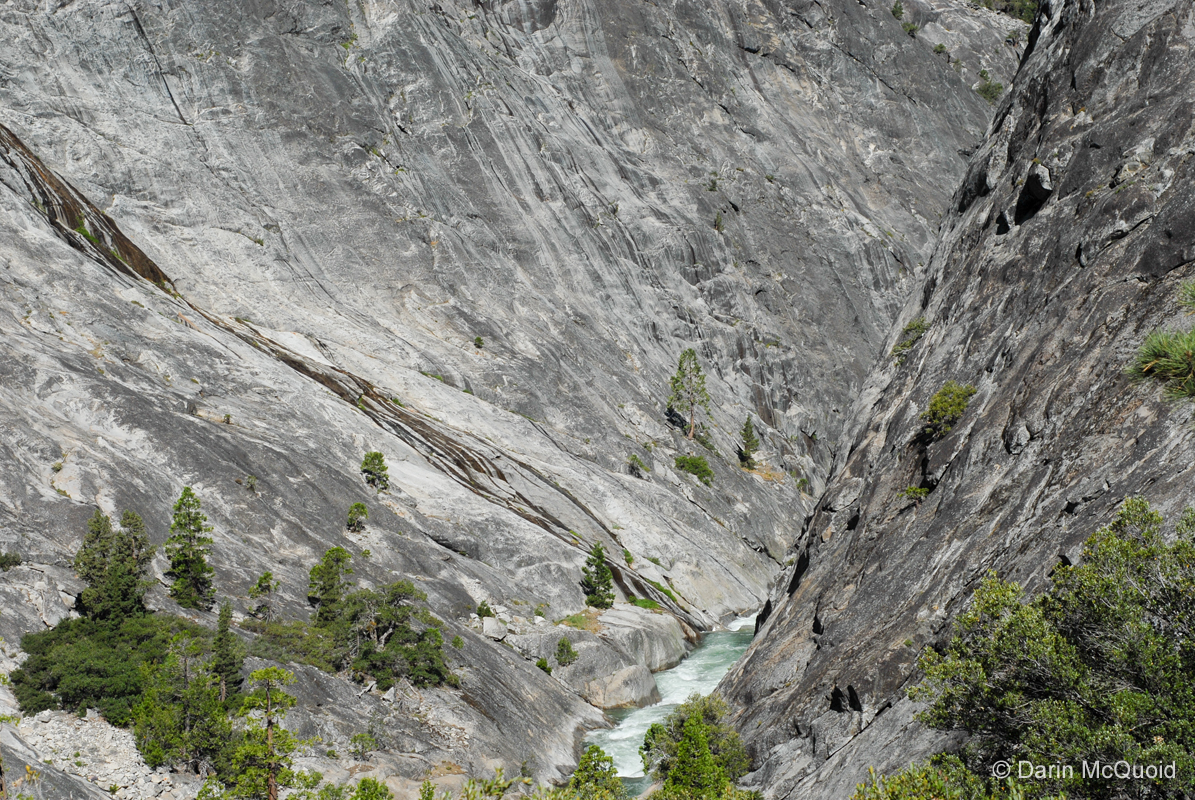 Sunlight in the campsite prompted us to start our morning mission. Knowing we would want a good look at Muir Gorge, we ferried our boats and gear across and started to hike downstream, sans kayaking gear to avoid heat from both the sunlight and rangers. Five minutes down the trail and it started to switch back up and over the gorge, so we split off to the granite domes, trying to keep the river in view. Our first major glimpse revealed the obvious; the gradient was as high as the map showed, and flows were high.

And to think that this is just a lead in rapid… 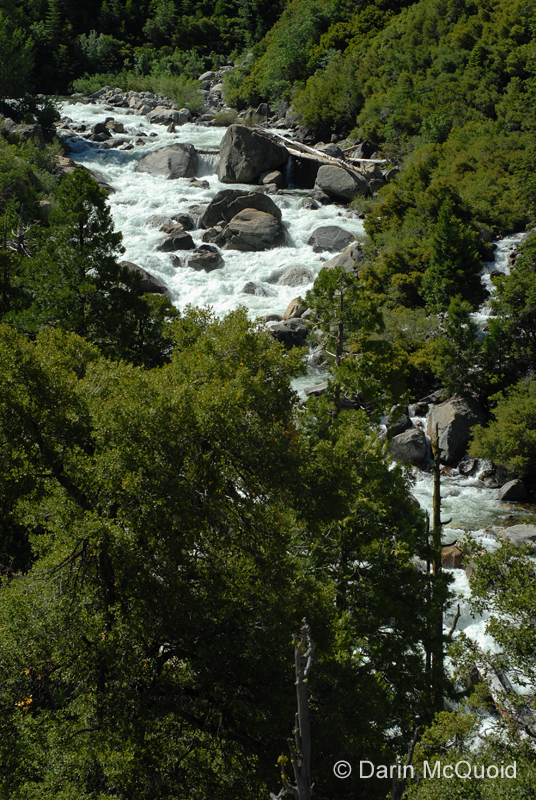 The top half of Muir Gorge is incredibly scenic. 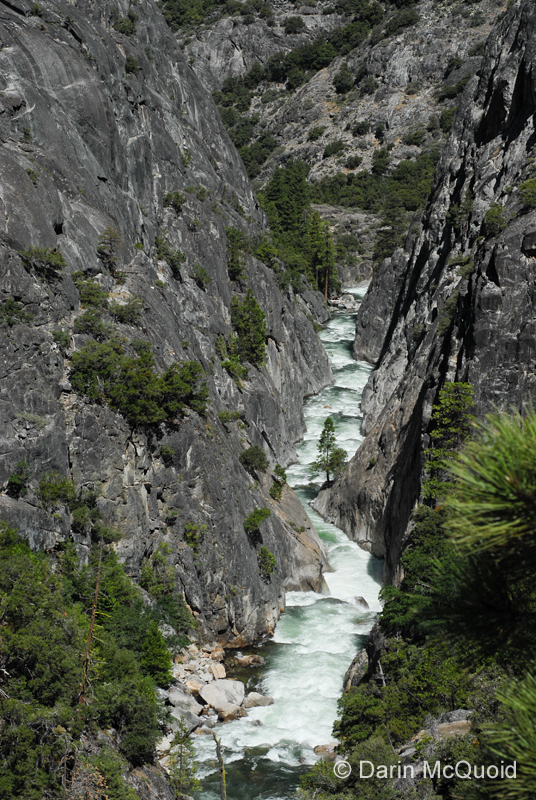 The top half? Only partially done with our scouting mission it became apparent that while Muir Gorge had some locked in rapids, although it didn’t live up to locked in nature like the Crucible, because there was a halfway point access. There is one “un-un” in Muir Gorge, which at our flows looked more like an unrunable, unportageable (at river level) rapid.


Ben Stookesberry above the beast in the gorge. 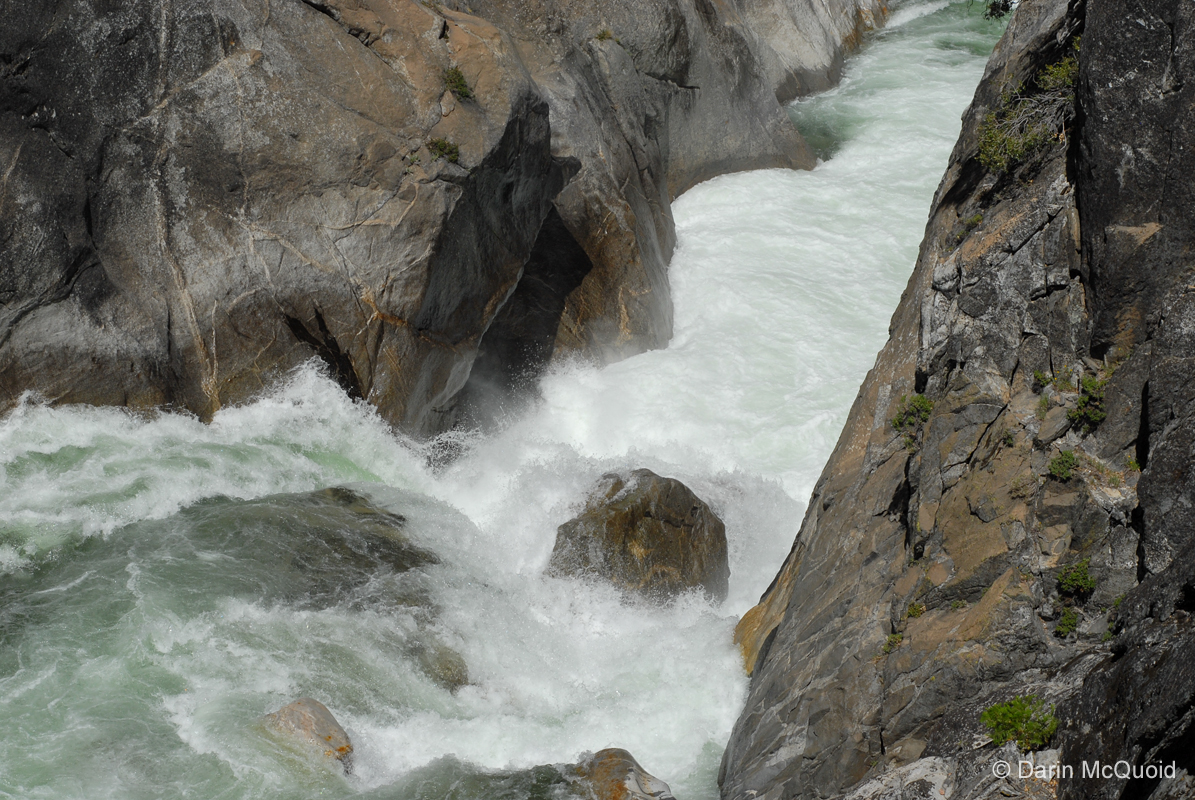 We gave this one a good long look. There was no doubt it was highly marginal at best. The hole at the bottom looked horrendous, but wasn’t our largest concern. What we couldn’t tell was if the water on the left side was shallow, or even went under some barely submerged rocks. That was the major hazard, with the smaller hazard being river wide hole with pockets on both sides. The surface water was pulling back for at least fifteen feet to top things off. With all the spray and chaos there was no way to guarantee that it didn’t just fall into a sieve, and since the rapid had been previously portaged because it was sieved out at lower flows, we decided that it wasn’t in our best interest to see if it went, although it did have that strange half curiosity draw “just to see what would happen”. We were out in the wilderness, fired up and slightly tempted, but standing above a drop where safety couldn’t be set and consequence was life threatening. Not exactly the right situation to just fire away.

We followed the draw back up to the trail, and proceeded to follow the trail up and over to be reunited with our gear. Arriving back at our boats it was already lunch time, so we took our time to discuss the options over a nice meal. It quickly became clear that we had three good options. One was to stay at river level, portage the gigantic lead in mess, run the top half of the gorge and portage up the right to the trail. The downside of this option was that the half mile, river level, gorge entrance portage would be both arduous and time consuming, and at these flows the first half gorge looked to be on the marginal side of the scale. Our second option was to simply hit the trail and stay on it until past the gorge. The upside was that this would be the fastest option. The downside was that it was almost all in the sun, and entailed a strenuous climb way up and over the gorge. More than anything we ruled out this option because we had met up with our shuttle driver and hiker, Chris Gabrelli, and due to new information and our calculations there was a very high chance of a ranger being on this section of the trail. The third option was to use our scouting route as a portage trail, keeping us off the trail and minimizing our elevation gain. The downside would be the chance of not being able to stay on our previous trail and possibly not be able to work around the slabs while carrying boats.

Considering our options for a while, we settled on the third option and set off, quickly finding things to be a lot tougher than expected with boats. Portaging with a loaded boat is never easy, let alone with five days of food in the mid day sun. Halfway through our portage we realized that it was sketchy climbing on the exposed sloping granite slabs with our boats, so we climbed up to the trail and hit it hard. The trail around Muir Gorge climbs several hundred feet above the top of the gorge, and to our surprise takes a long time to get back down to river level. Past the gorge we dropped down into thick forest, thankful to have both shade and fresh water from several large and beautiful tributaries that cascaded over the trail, one have the cleanest looking waterfall we had seen yet.

Once past the tributaries we started catching glimpses of the river again. We knew this was one of the steepest sections of the river. Perhaps at the ideal flow this section would be incredible, but it’s too hard to say. At our flows it looked like pure madness, and I was glad we were already on the trail.

And more of it…observe the random gigantic rooster tail in the mix. 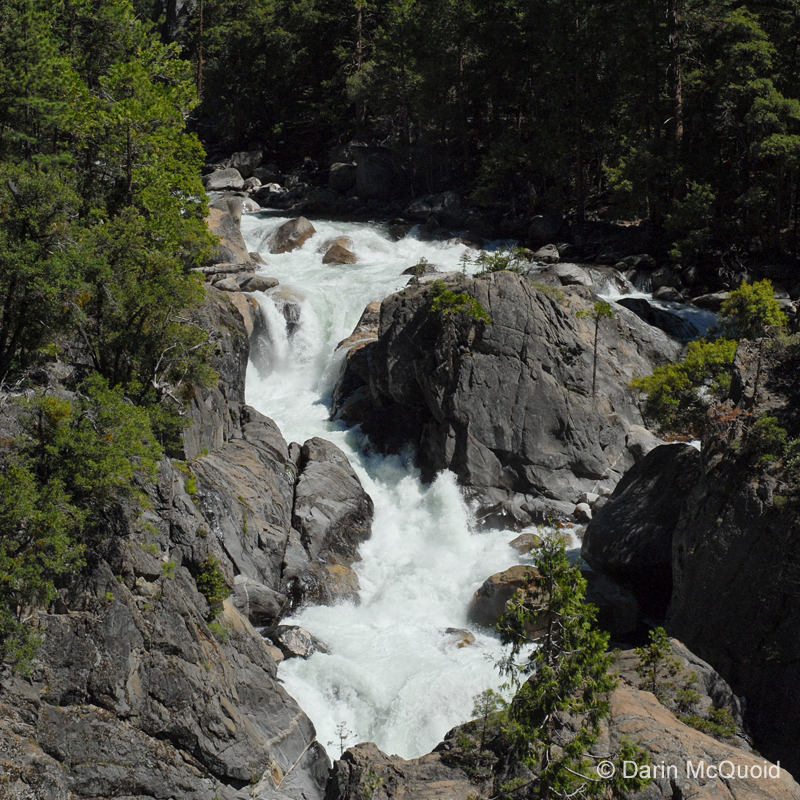 Each drop may have gone alone, but the V+ drops were separated by class V rapids, and I don’t think anyone gave it too serious of a look. We were all glad to see that the river turned back into a nonstop mix of class III and IV boulder gardens, and put back on glad to make some easy miles and cool off in the splashy water. While getting our boogie on through the fun boulder gardens we quickly came upon another interesting slide. The lead in was a convoluted slide to possibly terminal hole, and then a beautiful slide filled with an assortment of rooster tails.


A view from the top, the hole is partially hidden by the entrance slide. 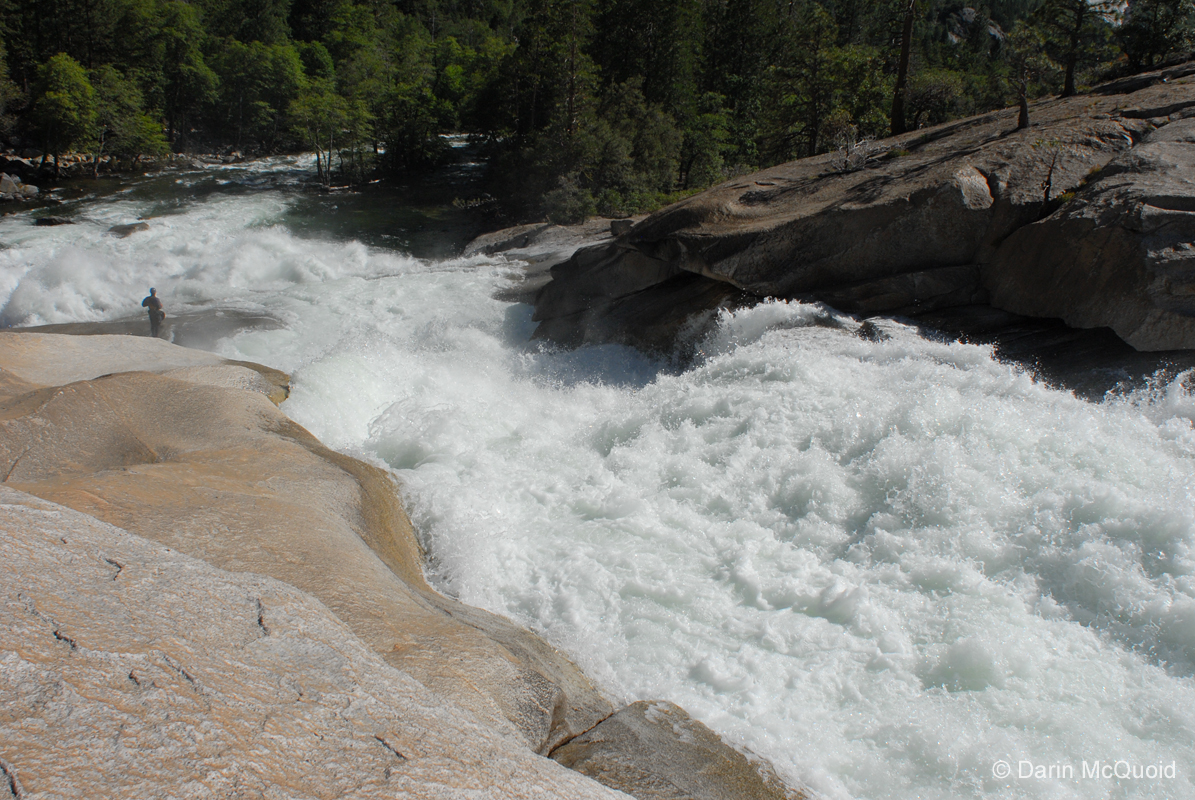 Not confident in my ability to keep myself upright over a rooster tail of this size, or willing to take a hit, I portaged to the bottom while Chris and Ben gave it a good long look. Eventually Ben started throwing wood down the slide and we got our cameras out know that sooner or later it was going to happen.


After all the logs eventually flushed from the bottom hole, Ben Stookesberry has found his line and seal launch location. 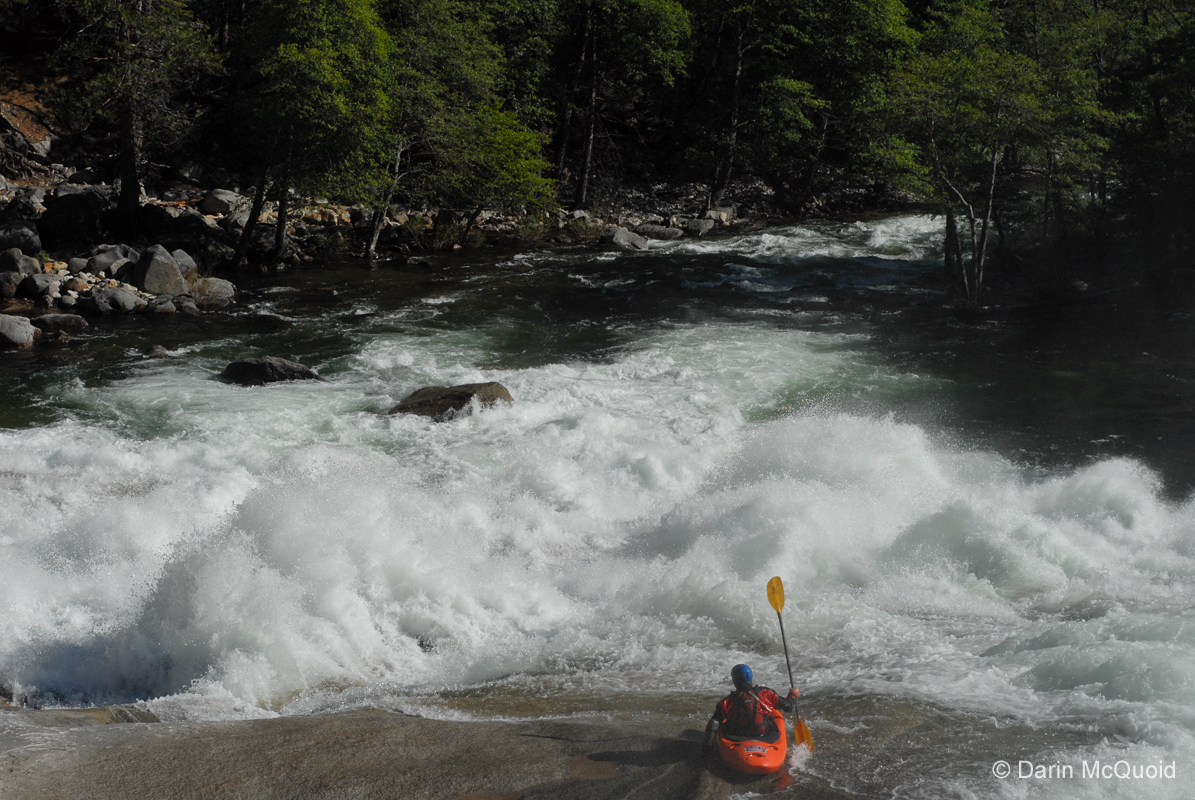 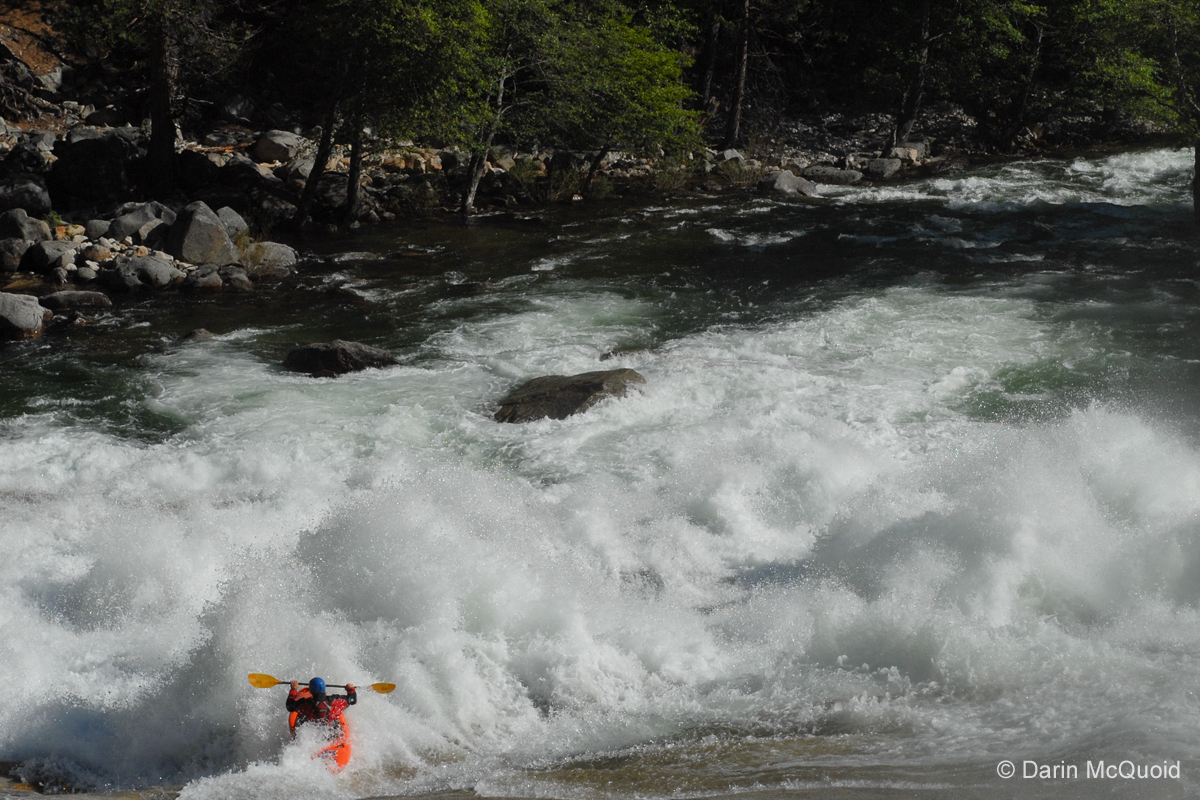 Ben tried to motivate Chris and I by offering to hike our boats up, and nearly, but not quite selling Chris on the plan we put in and headed into several more miles of high quality read and run rapids, finishing at another horizon above a slide, ready to call it an early day and catch up on rest. 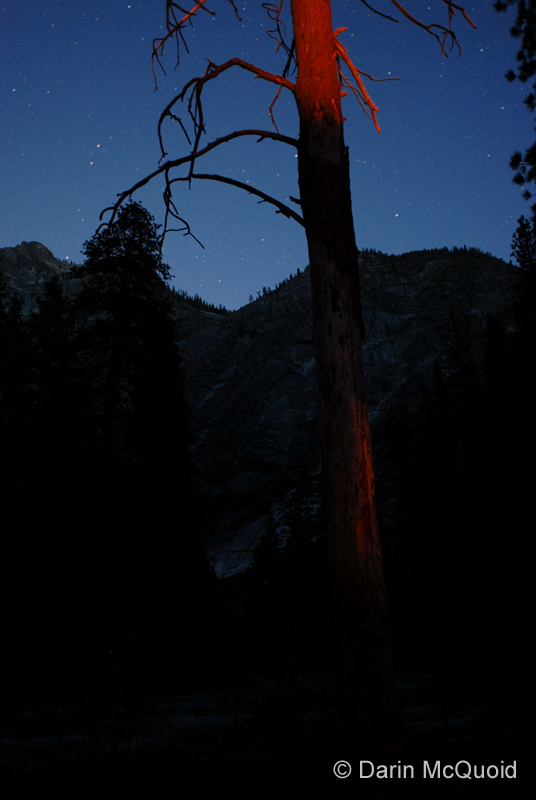 We ferried Chris Gabrelli across to camp with us, and enjoyed a beautiful night under the starts. Occasionally during the evening I would look up and think that clouds were coming in, only to realize it was the walls of the Grand Canyon of the Tuolumne towering overhead, it’s truly a very impressive place.