Humber River Falls V
With the Black Brook behind us we needed a quick day run to do before picking up Jesse Coombs at the airport in Deer Lake. Google Earth allowed us to fix a typo in our directions to Humber River Falls, and we were flying up the dirt roads once again.

The trail wasn’t too obvious, but once on trail we made quick time down to the falls to see what it was all about. Judging the falls from a Brandon Knapp photograph we deemed it a straight forward left to right move to avoid a bit of a cave at the bottom. Like most whitewater, the photo didn’t really do justice to the hazard in the falls.

Initially it looked straightforward, but after some inspected the pocket looked quite a bit worse than expected, and the left to right move required key timing to avoid sliding off into the pocket. Unanimously we decided that full boof would probably rear-ender the paddler back in, and plugging to a sixty degree angle looked ideal.

Chris Korbulic and myself would run it first. I felt like it went and wanted to get it over, knowing I wouldn’t run it if I saw someone get stuck in the pocket. We dismissed the entrance as a little class II drop and headed up to our boats.

Going first I peeled out of the eddy and ferried across into the entrance rapid, which suddenly appeared lot larger as I dropped over the horizon line and dropped five feet into a later hole which flipped me. Imagining myself running the falls upside down I rolled up at the bottom of the entrance and scurried into an eddy on the right to collect myself.

Somewhat collected I ferried across into the slide, which happened a lot faster than expected, and I hit the bottom still paddling instead of tucked forward. The impact from the water reflected off the right wall was hard, and instantly ripped the paddle out of my hands. Feeling myself surfacing I was relieved to feel that I was past the pocket and flushing downstream, and tried around ten rushed handrolls before swimming up against a mellow wall downstream. Need to work on that one some more.


Chris Korbulic dropping into the falls on the Humber River. 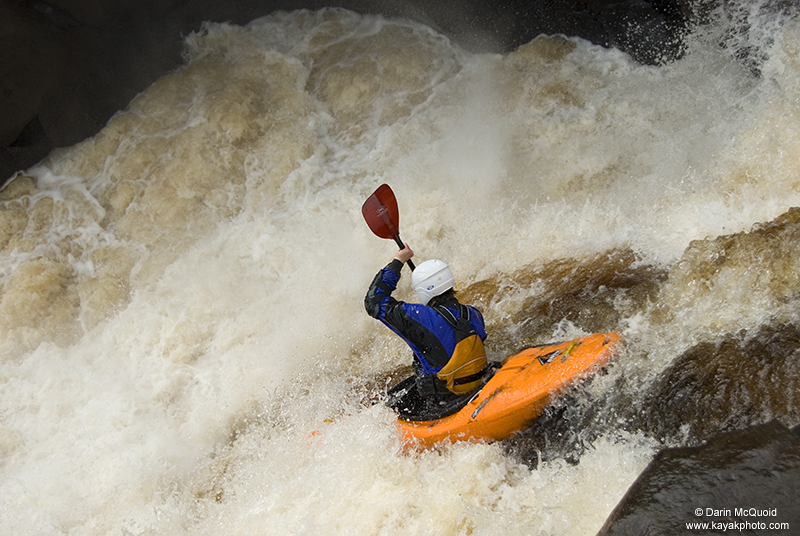 Chris followed with a similar line but nice tuck at the bottom, but deflected hard to the left at the bottom, the water pushing him into a crack between two rocks. Adroitly dealing with the situation, Chris managed to roll up with just a few bloody knuckles.

With two dubious lines ran, the rest of the group wasn’t feeling too hot about the falls, but Dane Jackson opted to go next, still undecided about the boof or plug. Dane also found the entrance larger than expected, and after dealing with it he came out of the right eddy, forgetting to make up his mind on the boof or plug. On the last second of the ramp Dane opted for the boof, and skipped over the pocket without even getting his face wet. 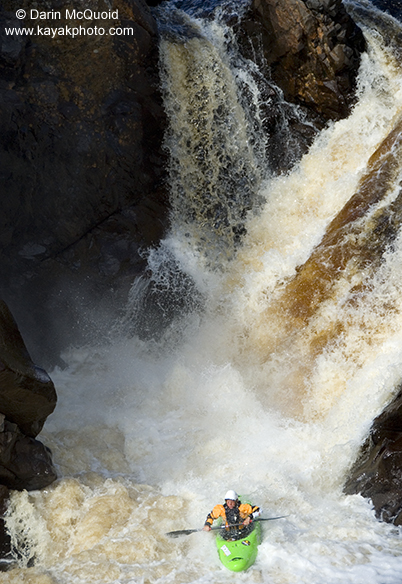 With Dane’s clean line, the group was sold on the boof and Nick Troutman, Eric Jackson, Joel Kowalski followed suite with no problems. Fingers crossed for rain, we went to pick up Jesse at the airport and head up the Northern Peninsula.