Like the Kaweah to the north, the Tule River does not start at the Sierra Crest. To the east the Kern River flows south, draining the Sierra Crest. The Kaweah River has the Great Western Divide, an impressive ridge of 12,000' peaks. With headwaters at 8,000' the Tule River is more creek than river. Also unlike the Kaweah, the Tule is not surrounded by National Park or private property. This is a blessing and a curse. It has fantastic access at the cost of massive amounts of graffiti and trash.

If you don't know the run, you'd never believe that two miles could take so long. Nearly every rapid is blind, even the class III. This was my third time down, and the first two I learned the hard way that during the winter a considerable amount of water comes from the North Fork Tule and skews the gauge. While 325cfs may be a solid flow in the summer, it's the low end of good in the winter. On May 7th, 2016 the snow level is just above us. 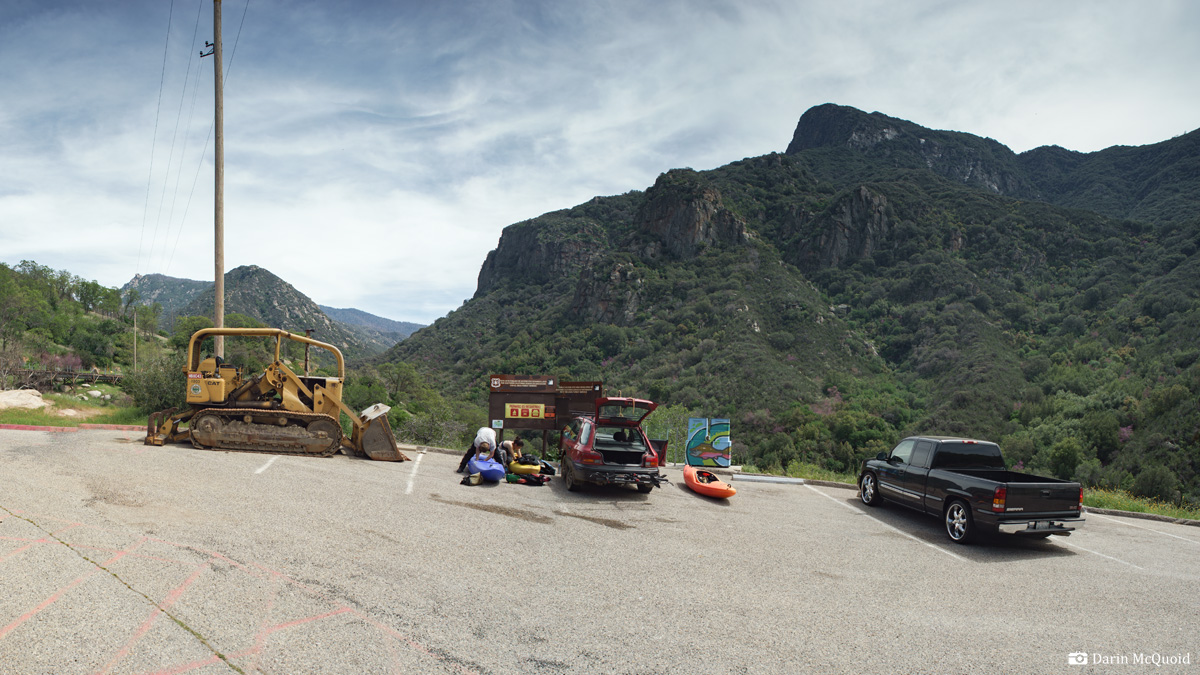 The Tule has an incredible amount of access thanks to trails down from the road. Tom Perkins. 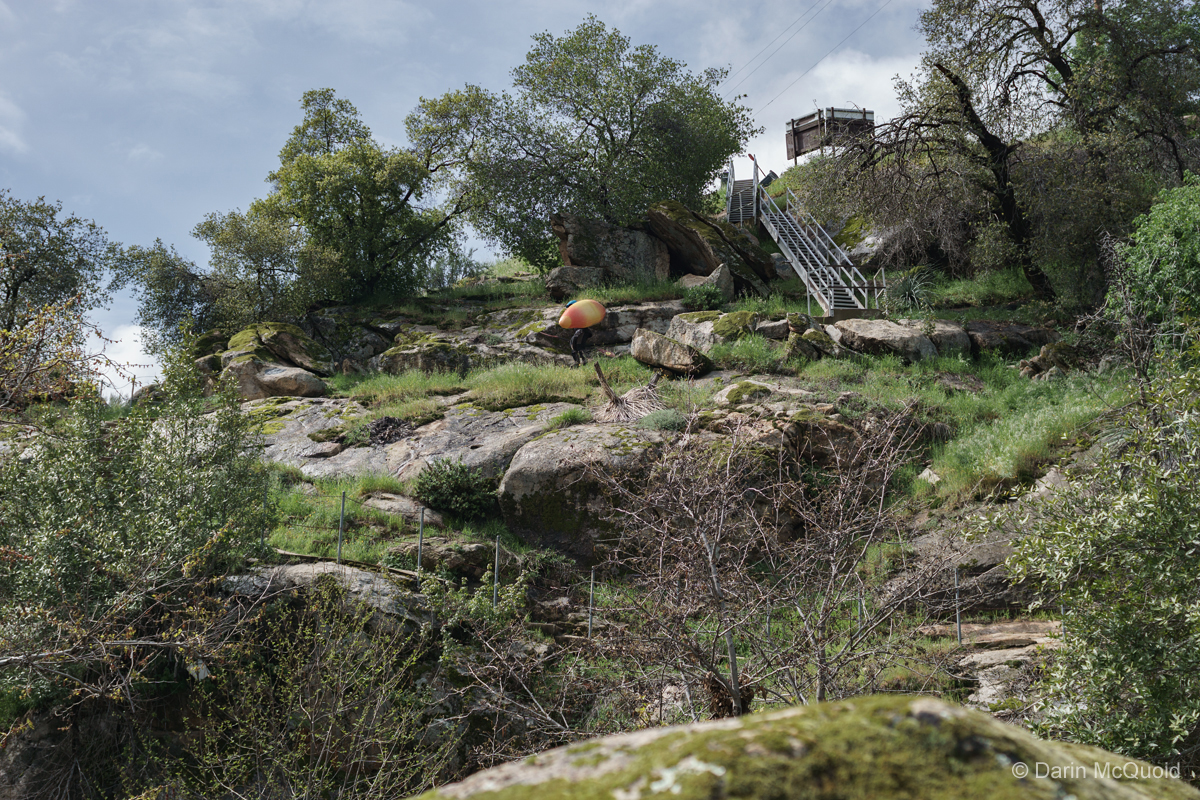 Not many rivers in California have stairways to the water. Gavin Reiser. 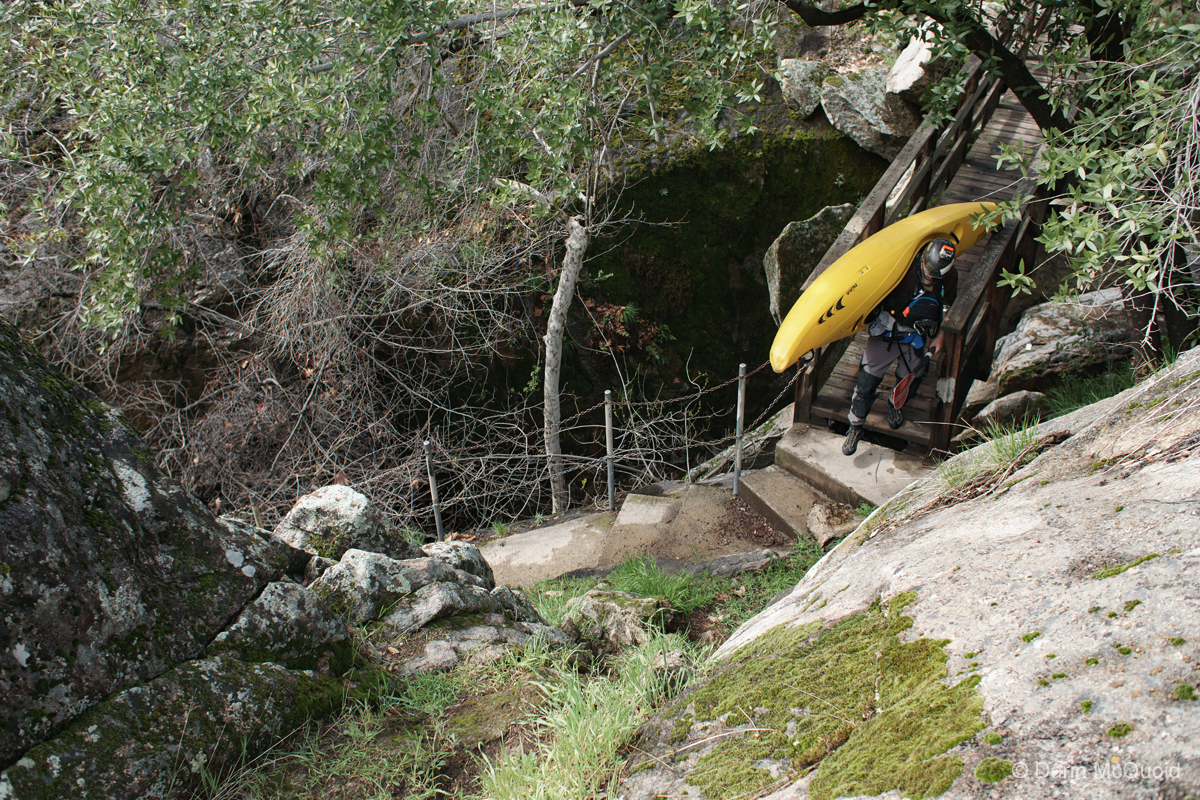 The vegetation is unique, yucca plants and many cattails in the riverbed due to the drought. 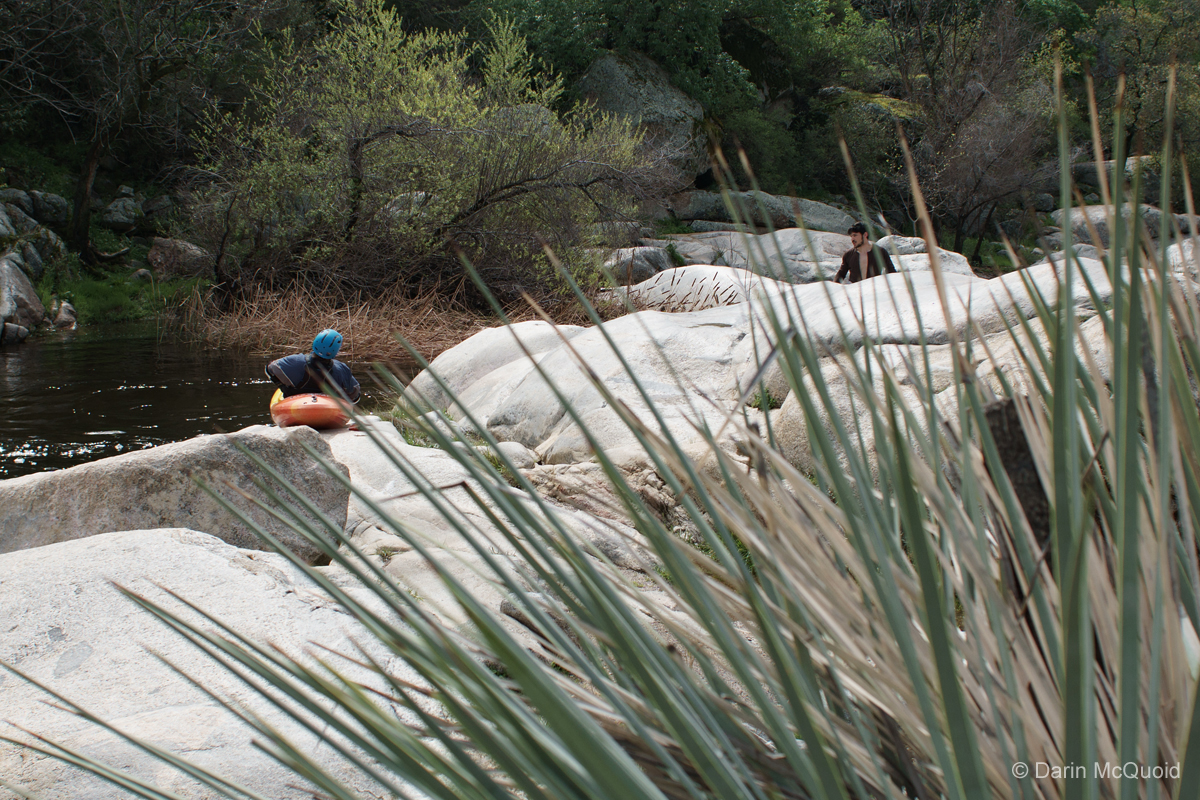 The Tule is one of the most channelized rivers I've ever seen. Tom Perkins in an early slide. 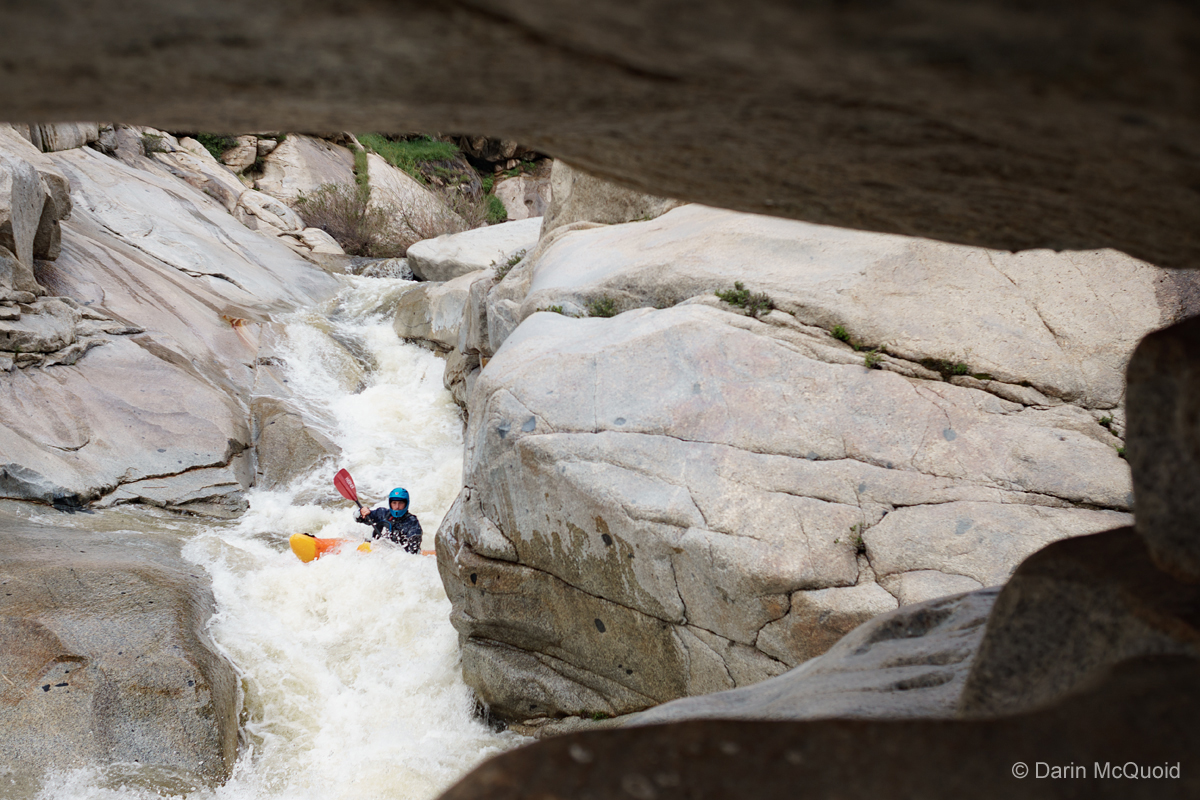 As it's my third time down we're able to move quickly, portaging when necessary and with a quick scout here and there for the larger rapids.

Our first trip day was at way too low of a flow, yet some rapids were still quite fun. Chase Hauber runs one of the iconic rapids of Tule. 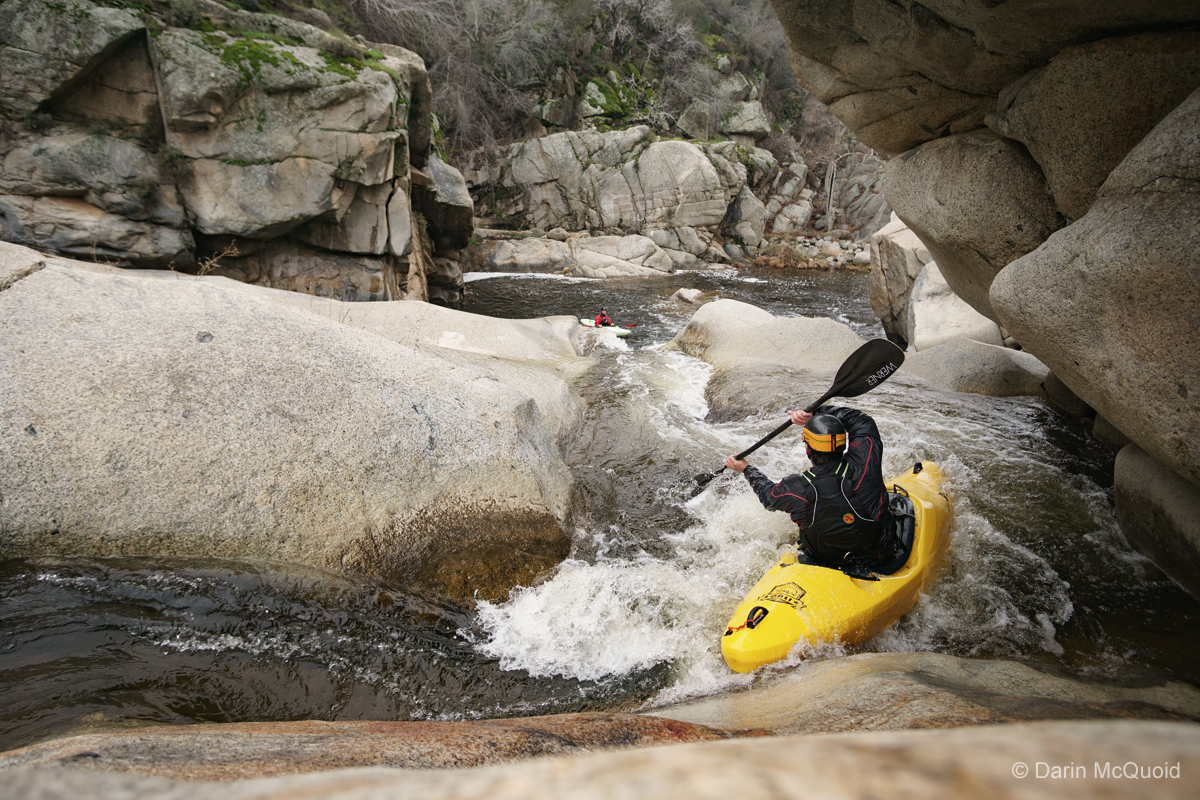 The same rapid from below with much more water. Nick Gottleib 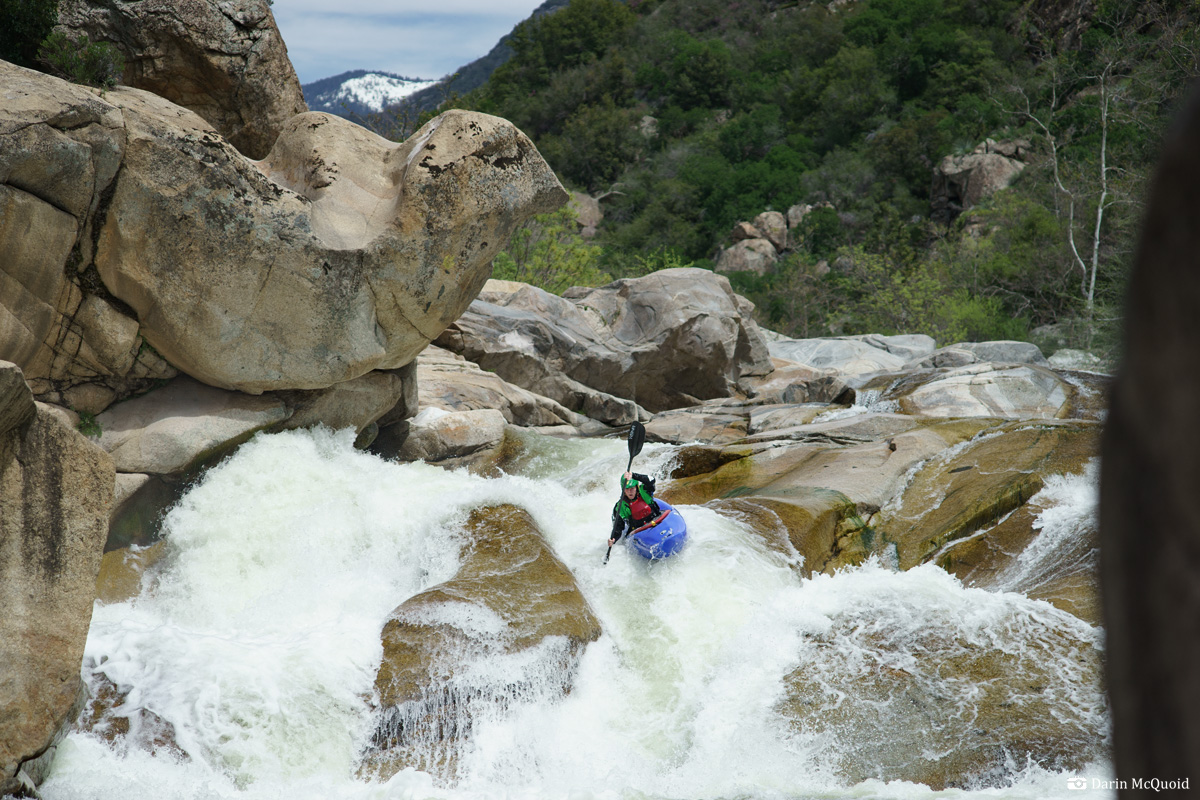 There is no doubt that the Tule has plenty of undercuts, thankfully most are easy to portage. Gavin Reiser. 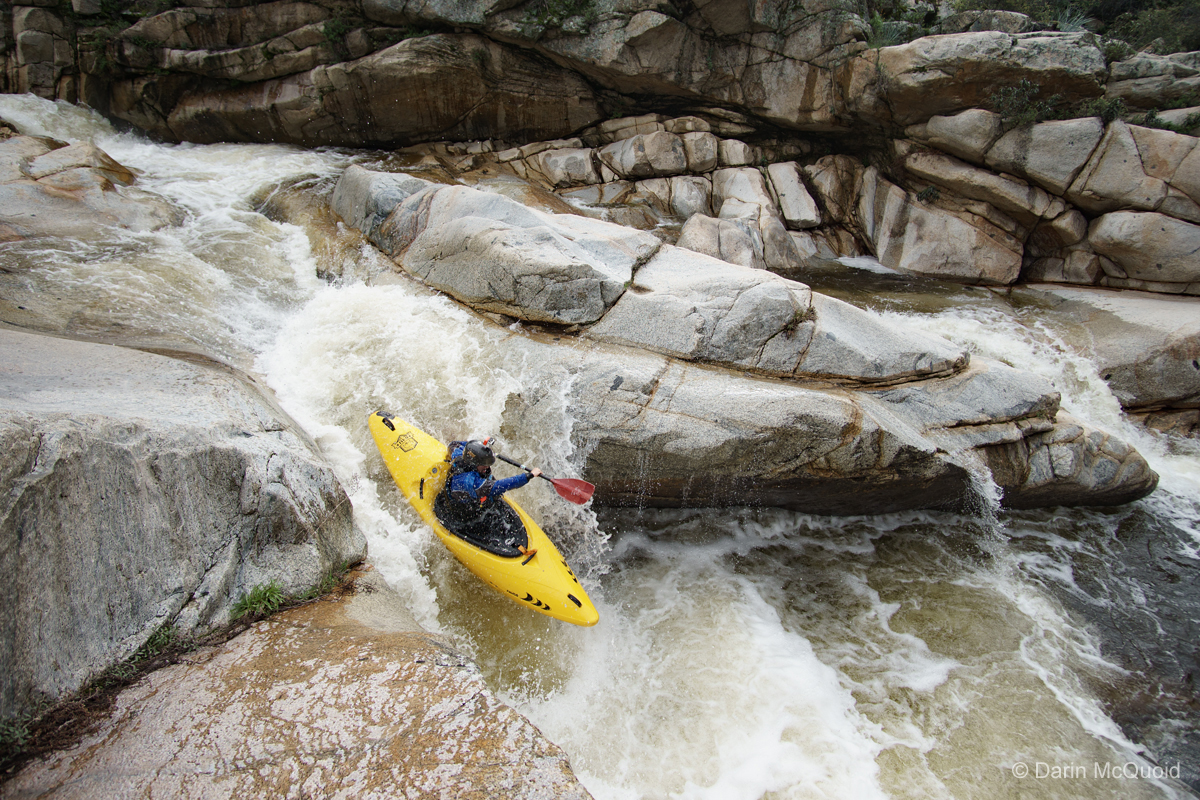 Looking back upstream at an interesting ten foot drop. 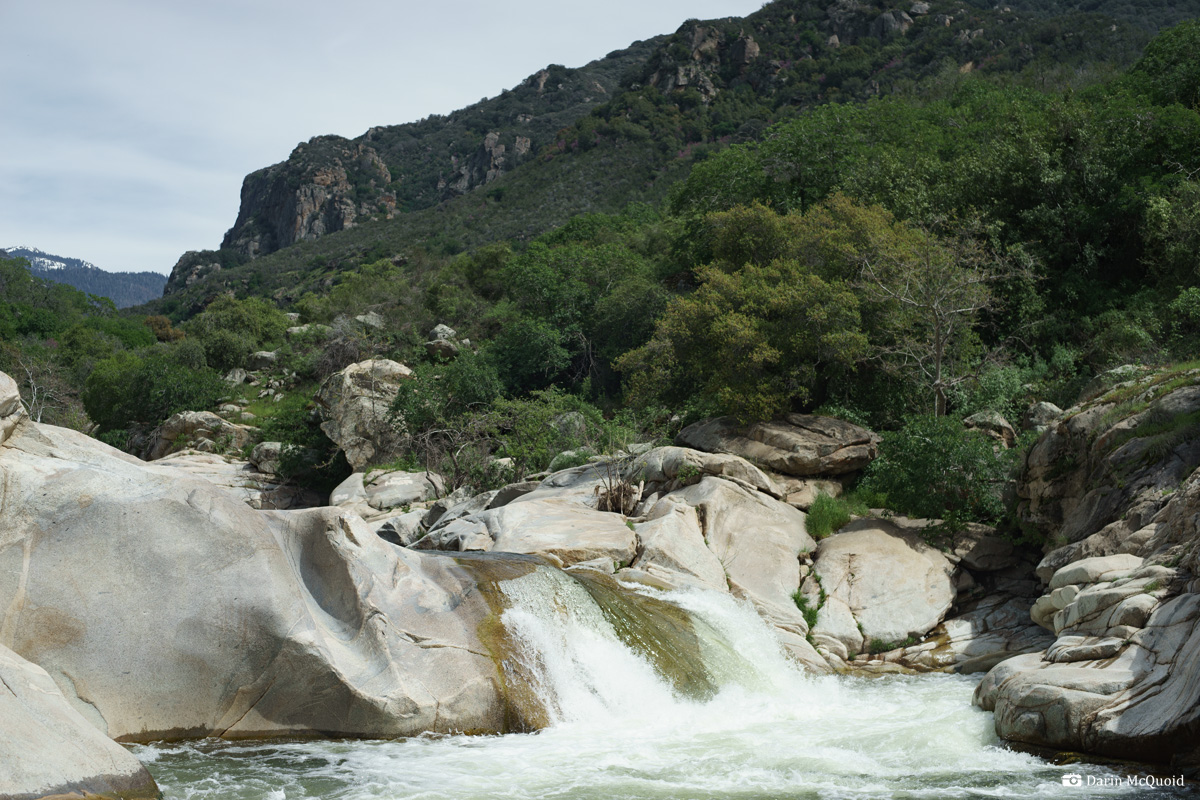 It's a mix of boulder mank and amazingly clean slides, Chase Hauber and Logan Marlow on one of the few more mandatory sections. 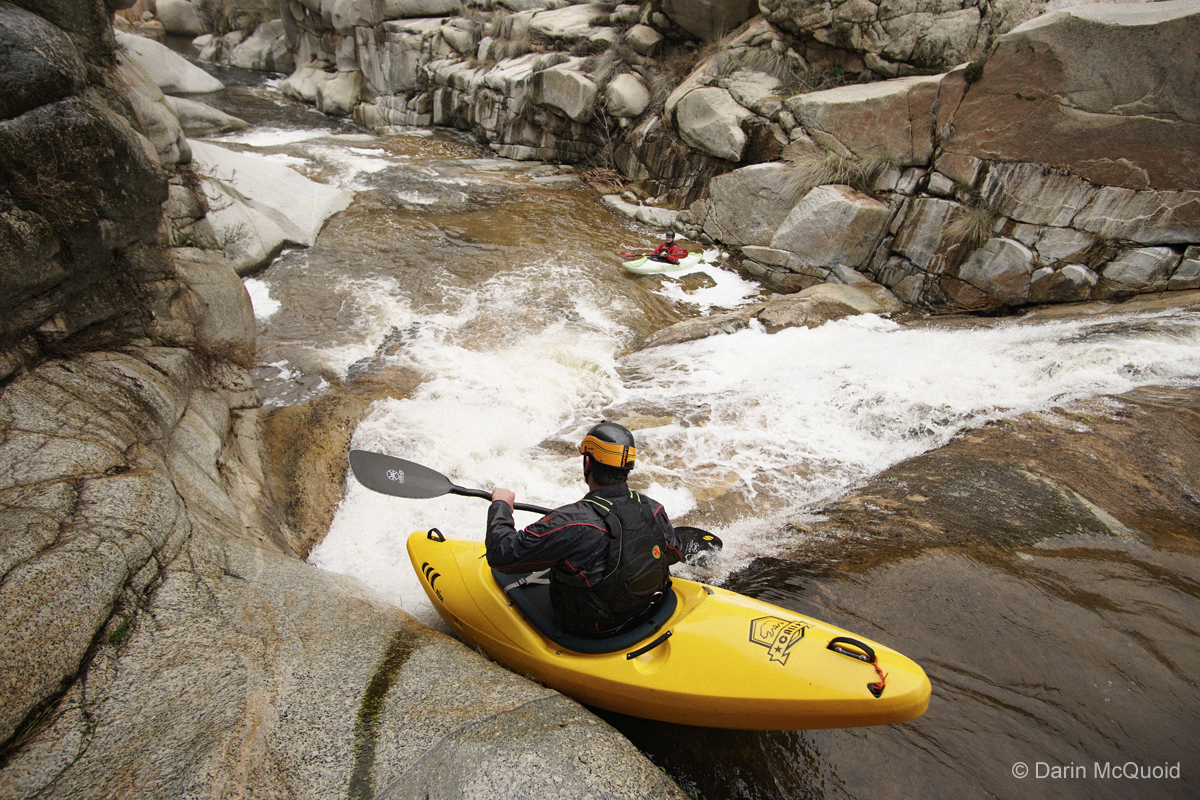 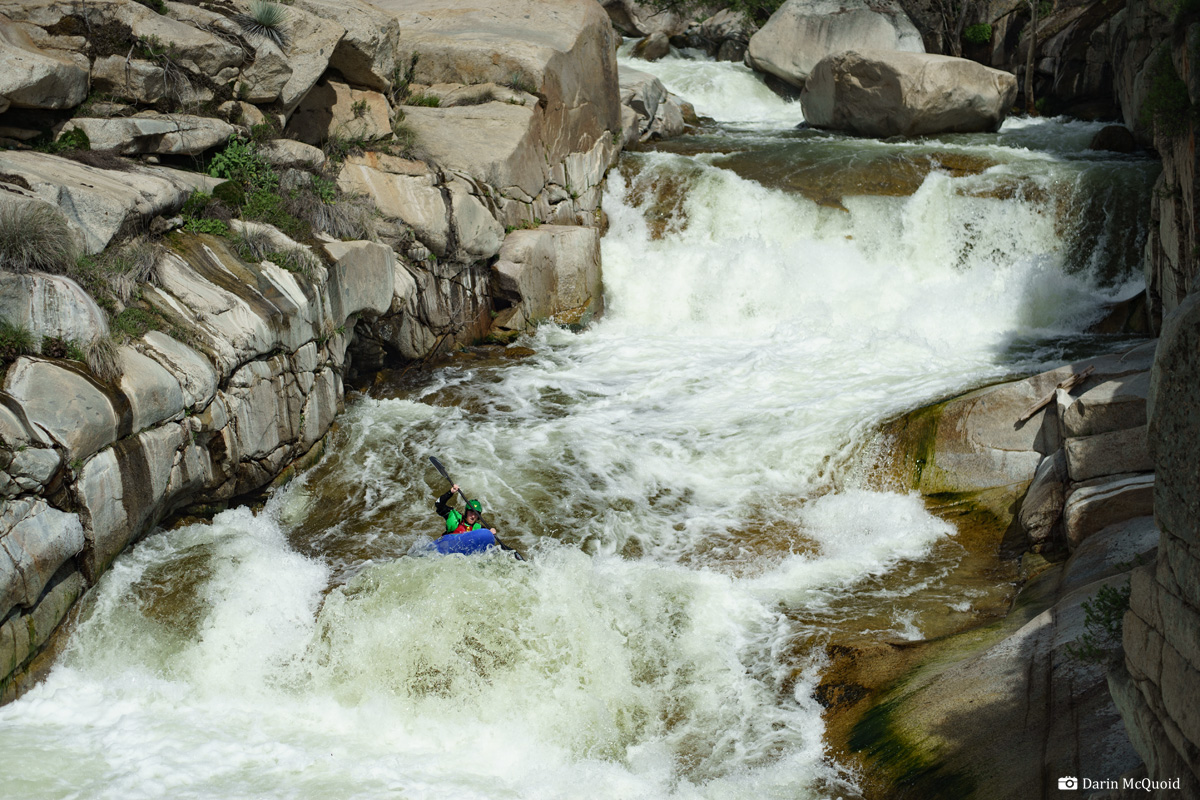 The rock on the Tule is some the strangest in the state. Incredibly polished granite for the most part, yet what is in the riverbed tends to be very sticky due to minerals in the water. It's almost like a lime travertine coating on the rock below the water, which is a shame because the run is much friendlier at low flows, yet it can be strange to have the slides a bit sticky. 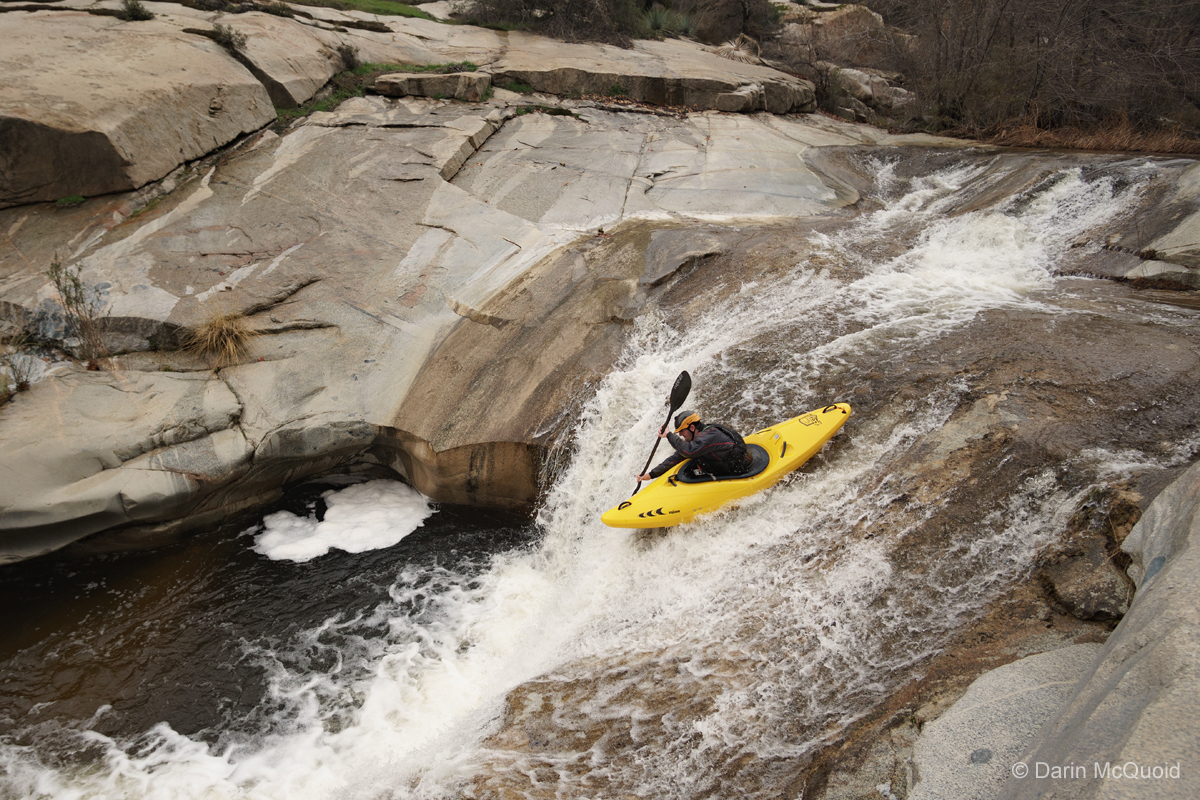 Over the course of three runs we always portaged one big siphon in the middle of the run. This slide is also a common portage, although it's a bit of a pain to walk around on the left. Gavin Reiser. 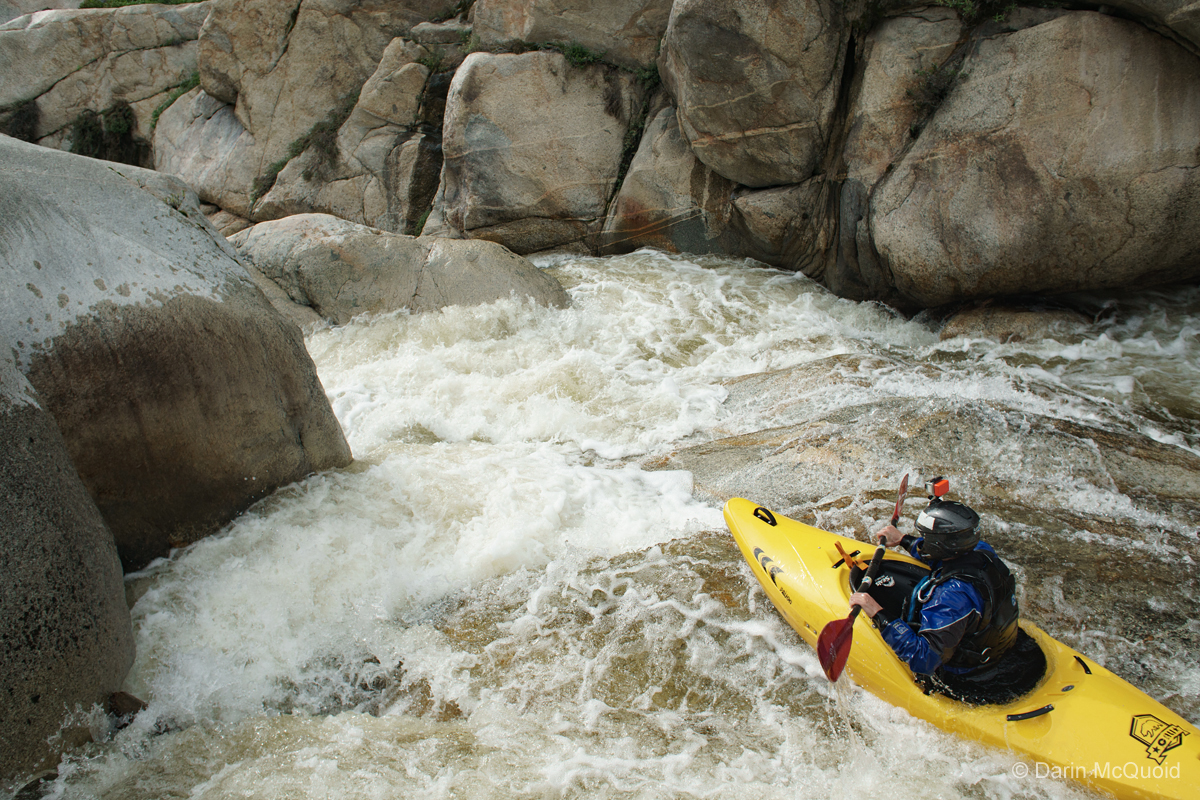 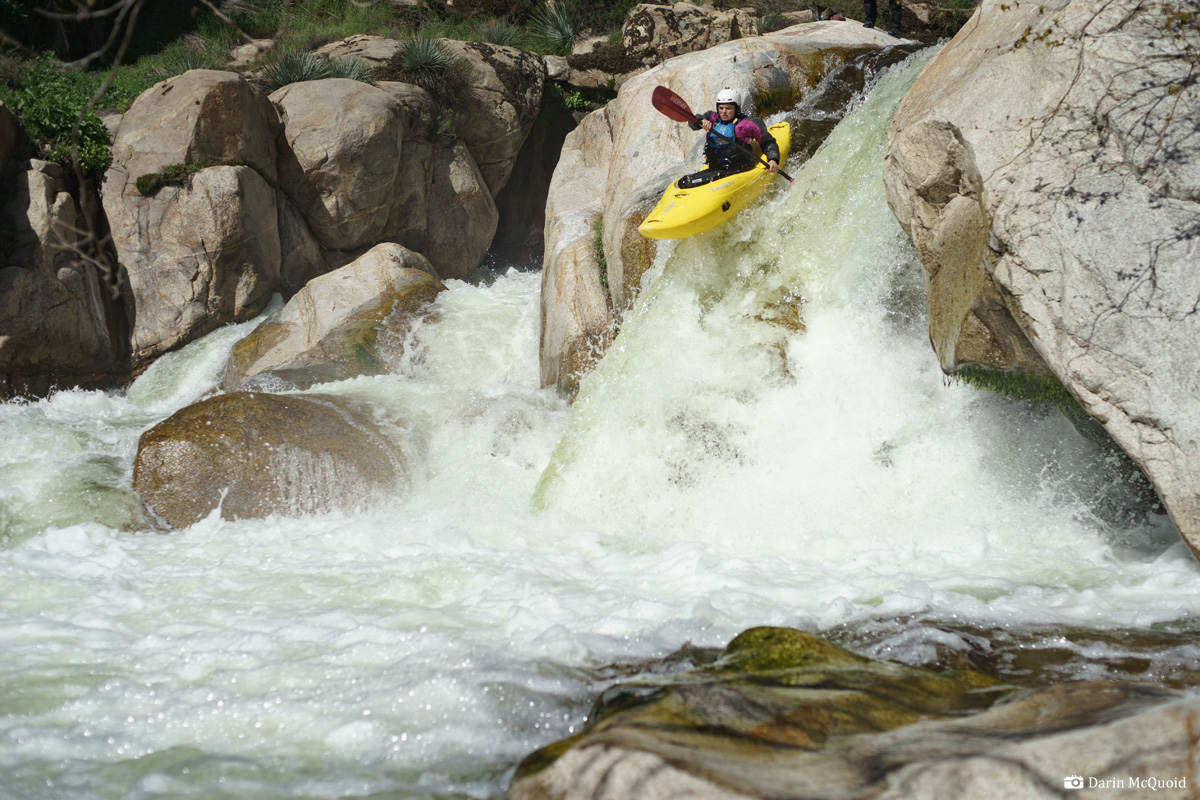 Chase Hauber at the start of a long sequence of slides and holes. 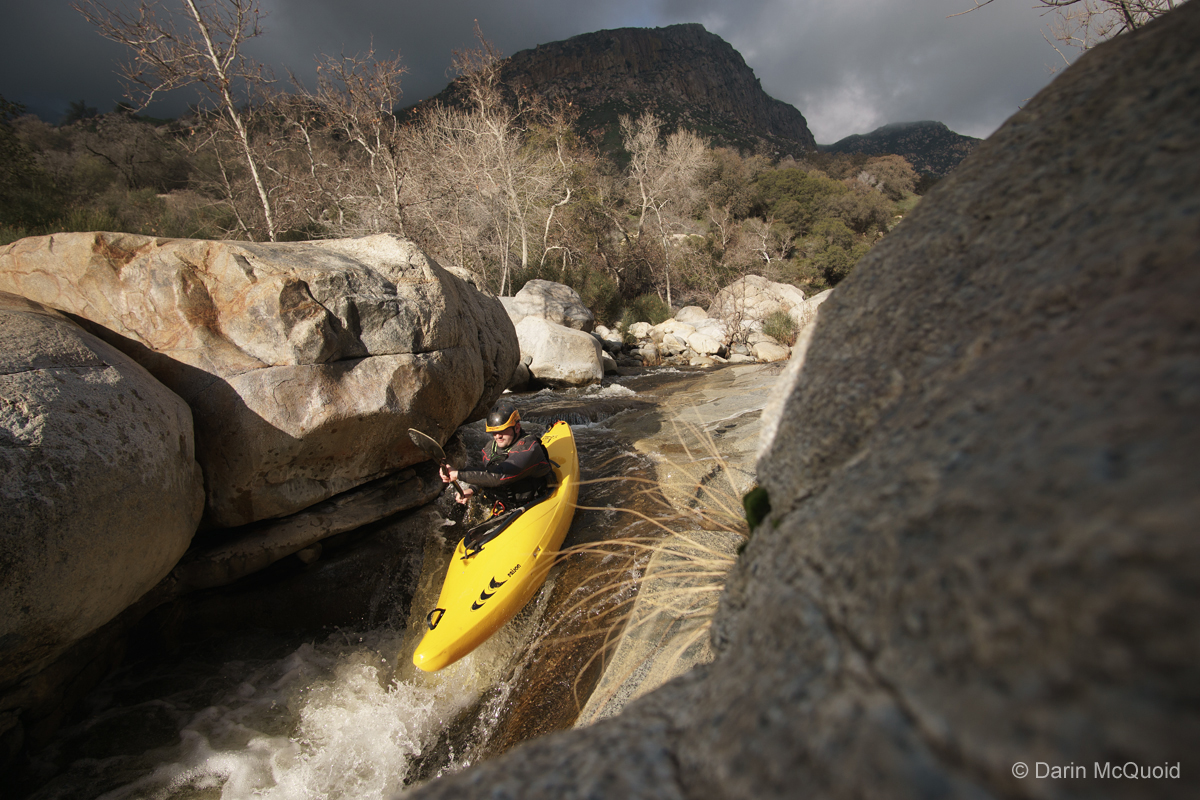 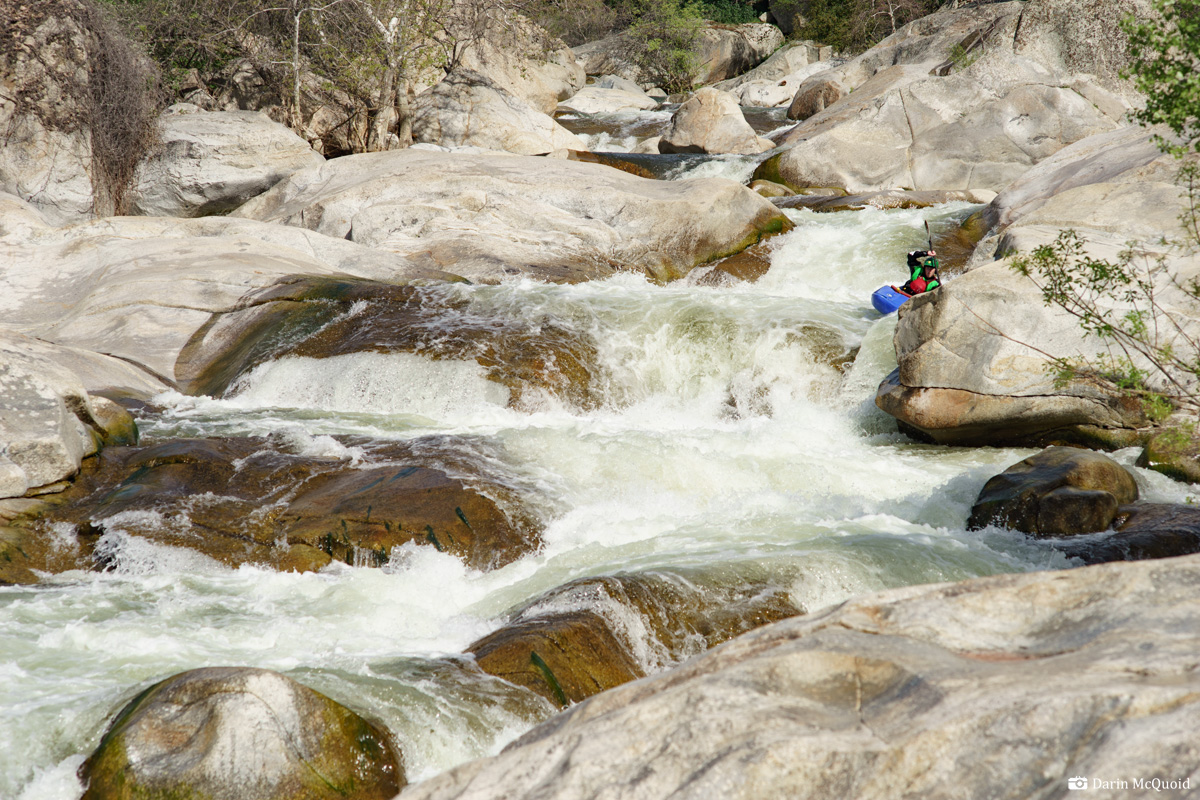 Take Out at Upper Coffee Camp 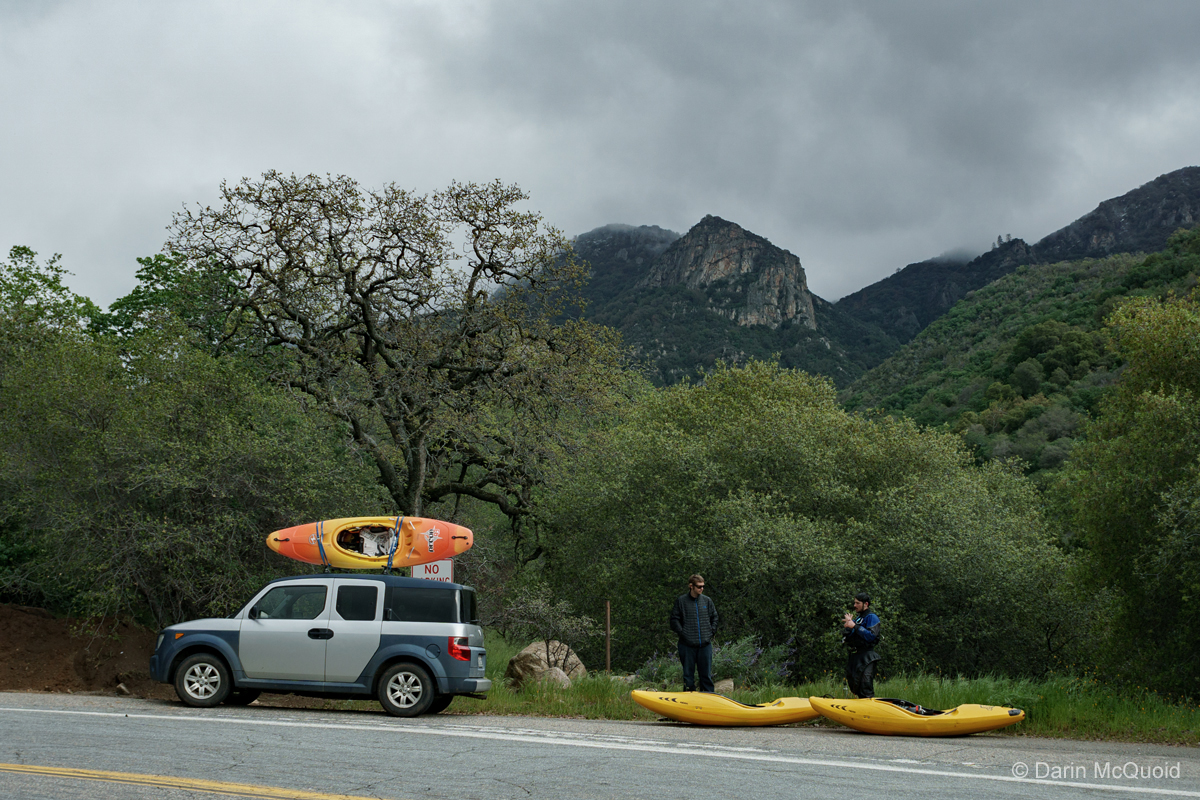 The Middle Tule is certainly a unique run. People rate it all over the place, and that's because it's incredibly flow dependent. At lower flows, with a few portages, it's easier than Hospital Rock or the Upper Middle Cosumnes. That changes as flows get high. It can be an exhausting river, nearly every rapid is blind and will require scouting if you don't know the lines. As flows go up it gets considerably harder, yet better because there is less contact with the sticky rock. Take out options pose some unique challenges. The ideal take out is just below Coffee Camp Campground, which is typically closed when the Tule has enough water. There is no parking on the road here. An alternate take out is the day use area at Lower Coffee Camp, which is $10 a car, and adds in 2-3 portages around dangerous rapids. This take out situation makes the Middle Tule an ideal run for hitch-hiking or biking. Locals are friendly, and one can load quickly in a no parking zone and avoid the extra portages down to Lower Coffee Camp.

Flows: Look for a bare minimum of 325cfs on the Tule River Gauge in the winter, or a minimum of 200cfs during snowmelt. Be aware the gauge is all over the place depending on the snowpack year, in  375cfs in 2017 was double the flow that 325 was in 2016 so take that gauge with a grain of salt.

Google Maps link for Take Out and Put In.

Middle Tule from darinm on Vimeo.

The Tule River is just upstream of Springville, California. 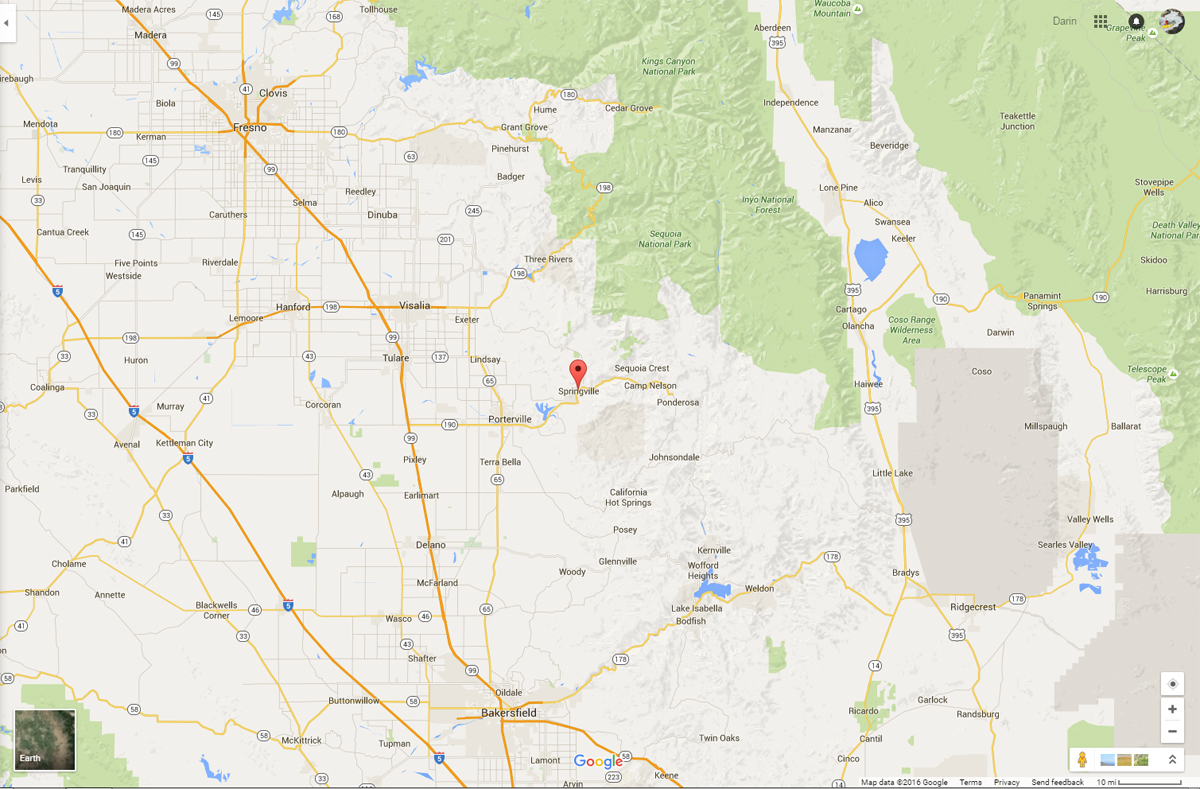 Other Beta: A Wet State