North Fork of the San Joaquin, Lower IV-V+
It’s been said there are no quality first descents left in California, or that what is left has more hiking than boating. There aren’t many first descents in California left, and the last one I was involved with, Lost Creek, held true to this theory. However the most common trait in exploratory kayakers is continual optimism.

The North Fork San Joaquin has been on kayakers’ radars for a long time. I’d heard tales of people flying over and seeing incredibly steep bedrock. Logistical problems have held people back. The largest problem is the Middle Fork San Joaquin, a river not many have done. Legends of its inescapable gorges are wide spread, and if the North Fork confluence was above one it could spell disaster.

The previous summer while running the Middle Fork San Joaquin (Devil’s Postpile) we had noted that the North Fork confluence was below the walled in “boof-o-matic” gorge and above the “class IV” gorge, and exit could be made via Millers or Cassidy Crossing. I was convinced the Crucible wouldn’t be safe with the added flow, so a steep hike out was the only option. 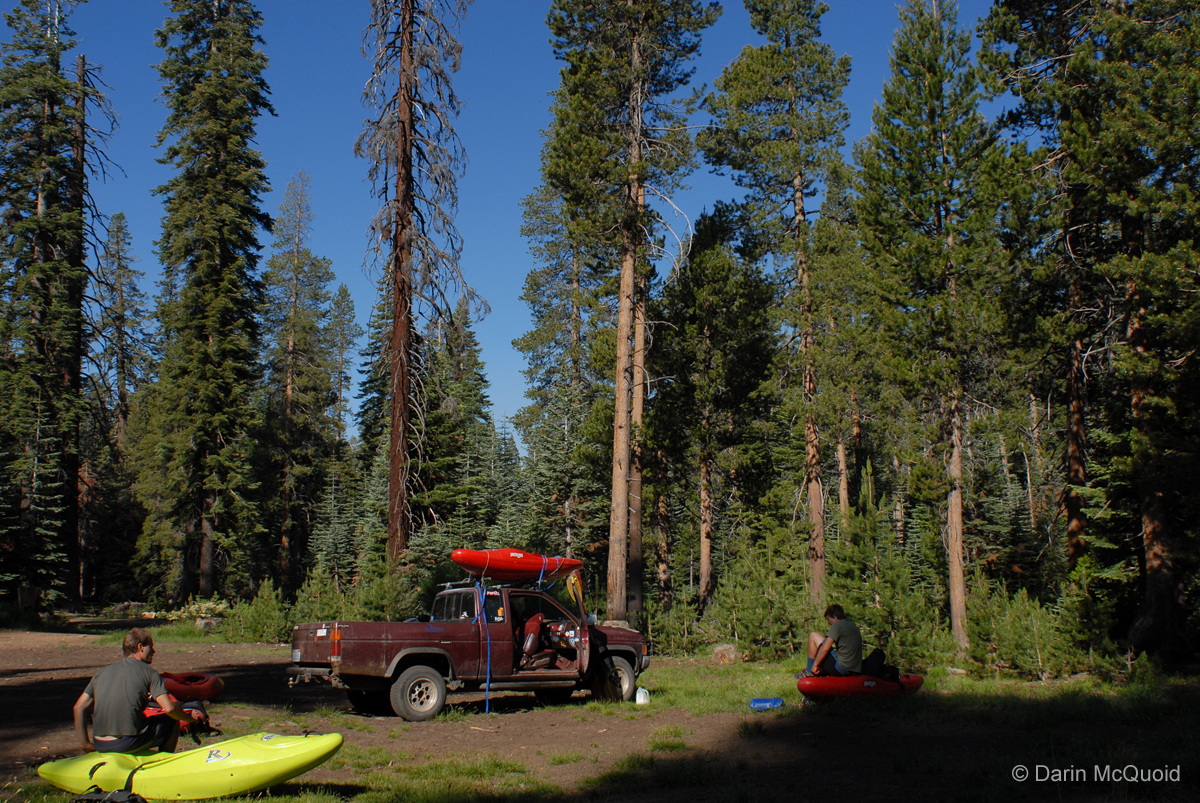 While seeking beta, I found that Kevin Smith had hiked a large section of the North Fork, and was kind enough to share pictures and beta, and the run was instantly my priority for this season. A big thanks to Kevin for sharing.

Driving south from the Tuolumne we scoured for more beta, and heard conflicting stories. One source thought flows would be a little high, and a second source reported that it would be way too low and that it “correlated with Dinkey Creek”, what was to become a well used joke for the rest of the spring. Dinkey Creek is a tributary to the Kings River, also commonly referred to as the “best run below 3,000 feet”.

The North Fork San Joaquin starts high in the Ansel Adams Wilderness, draining the south side of the 12,000 foot Minarets. We had complicated options. One was hiking in ten miles on the Isberg trail, kayak six miles to Sheep’s Crossing and hike another three. Option two was the same hike in, but kayak ten miles to the confluence with the Middle Fork, then another four to six on the river, and hike back out four to six miles at Cassidy Crossing. The third option was three miles of downhill to Sheep’s Crossing, boat four miles to the confluence, and then four to six on the main river with Cassidy hike.

From beta we knew that the upper section was metamorphic bedrock, and the river turned to granite only a short ways above Sheep’s Crossing. Looking at our map we found the steepest gradient lay below with three miles at 400fpm. Tired from the Tuolumne missions, we took the easiest option, setting the five mile shuttle, packing for three days on the river and heading to Sheep’s Crossing.

We'd  dropped the motorcycle off at the wrong location, and while moving the bike Chris & Chris took off for the put in. Problem fixed and heading to put in, we were surprised to see the Chris gang headed downhill. Upon arrival they met a volunteer trail maintenance crew finishing up their last day. After chatting a few minutes the trail crew invited us to dinner. Since it was their last day, all the extra food had to be finished, and we were more than happy to lend a hand during the course of the meal at Clover Meadow we also met some very helpful rangers and USFS employees.


Hiking downhill from 7,100’ with full stomachs had us at the crossing in no time. 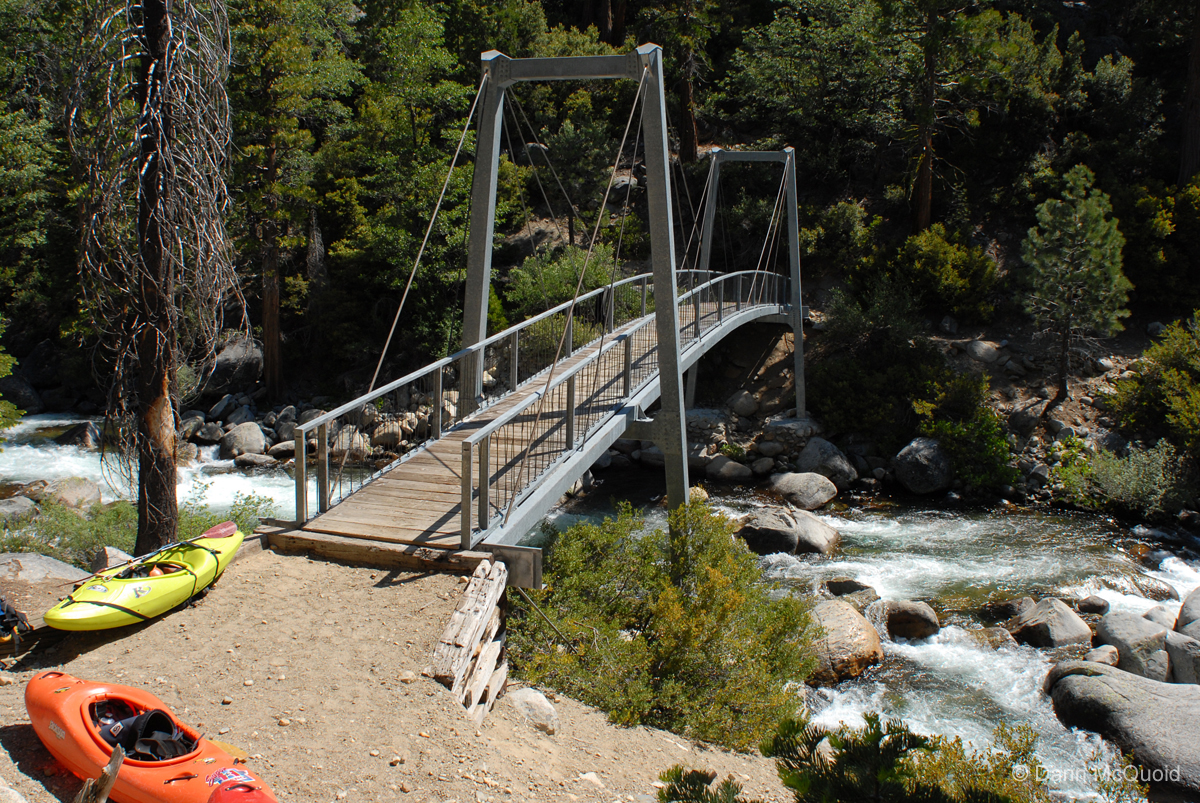 Hiking in to a wilderness run with no gauge for the water level, and no precedent for flows is risky business. We were all grins when upon inspection the water level looked perfect. With this major worry out of the way, we put on the cold water with beautiful skies overhead. 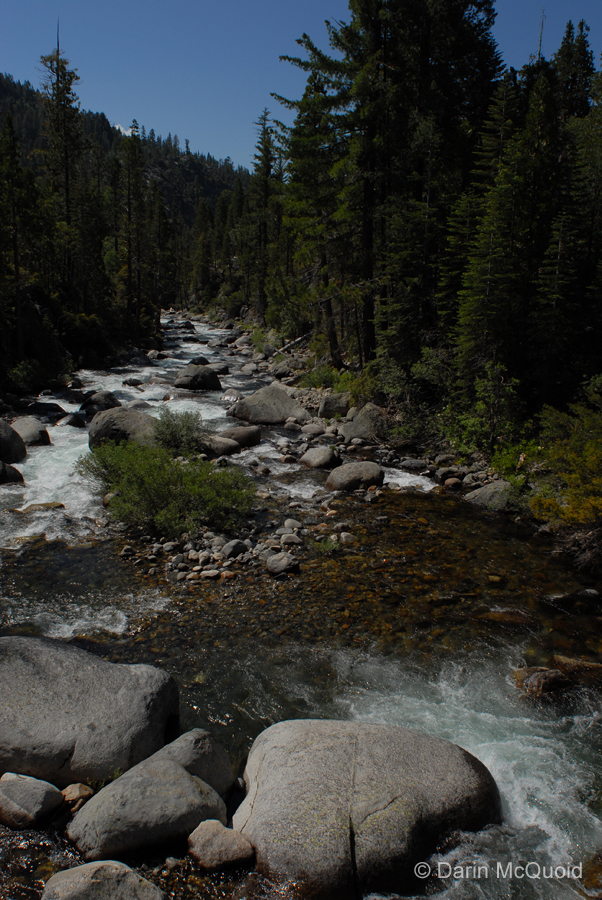 The first mile was filled with nice IV-IV+ boulder gardens in quick succession, and it took us no time for the river to start getting steep. Ben sent us through a few larger drops with some fine hand signals. 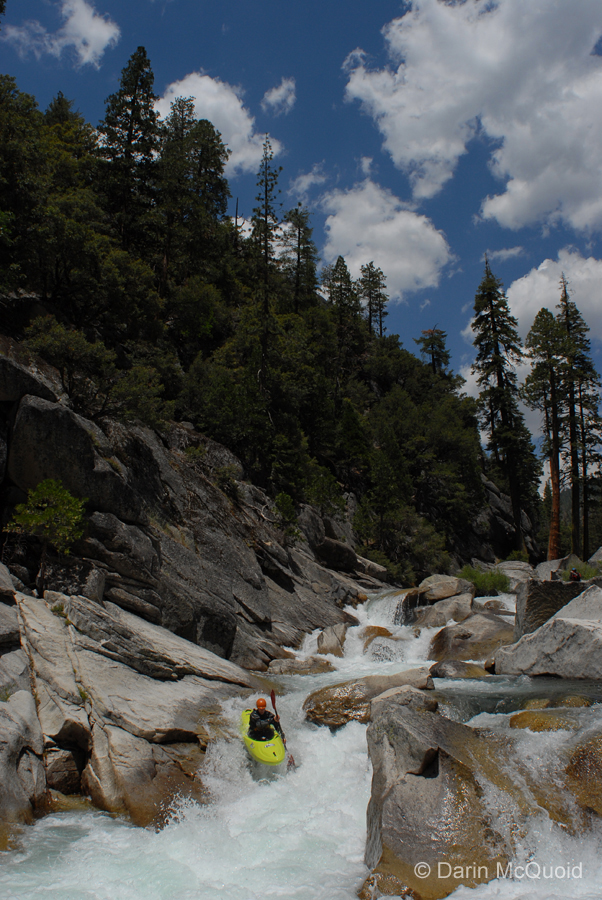 We routed through about half a mile of high quality boulder gardens, as the river continued to gain gradient.

The author as it gets steeper. 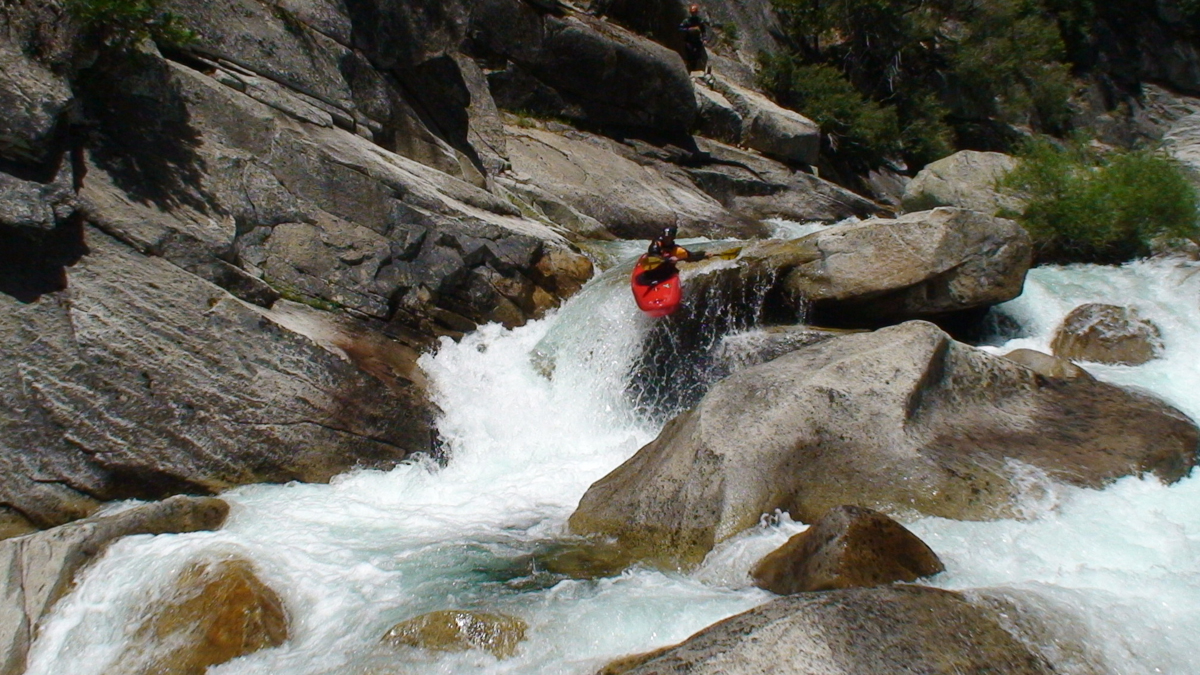 As the gradient increased, a class II rapid led into a boulder filled horizon line, the type of horizon line that you could see the tops of trees from. Climbing around on the boulders made the scout take a while, but it revealed a larger version of the “poop-smear” we had recently encountered on the Tuolumne. This one also had a tricky entrance, and after extensive scouting Chris decided to run it, while Ben and I opted to seal launch into a big cave and run the bottom half.


Chris Korbulic on the first drop of the big smear. 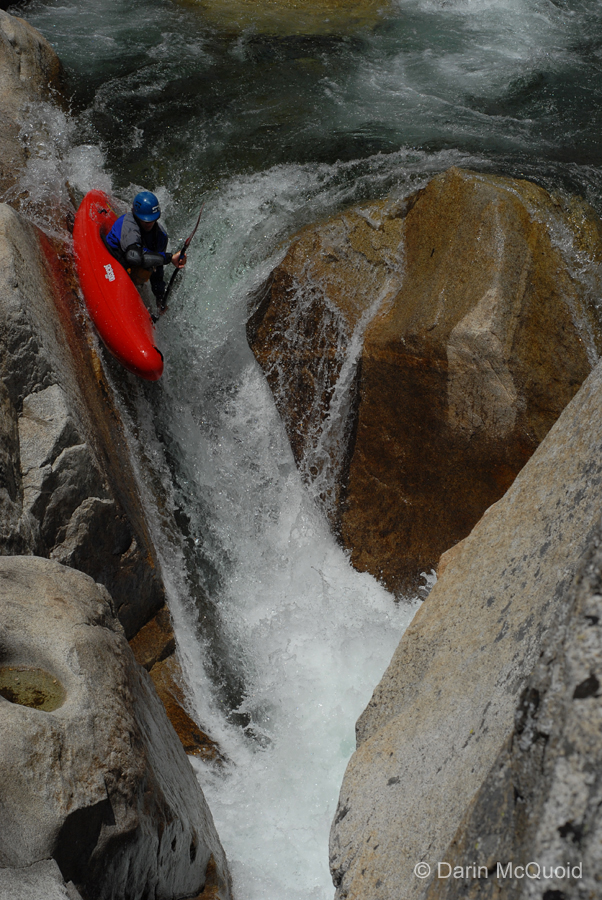 We all agreed that after the initial drop you would come through, but that you would have to deal with the weird spot at the bottom. 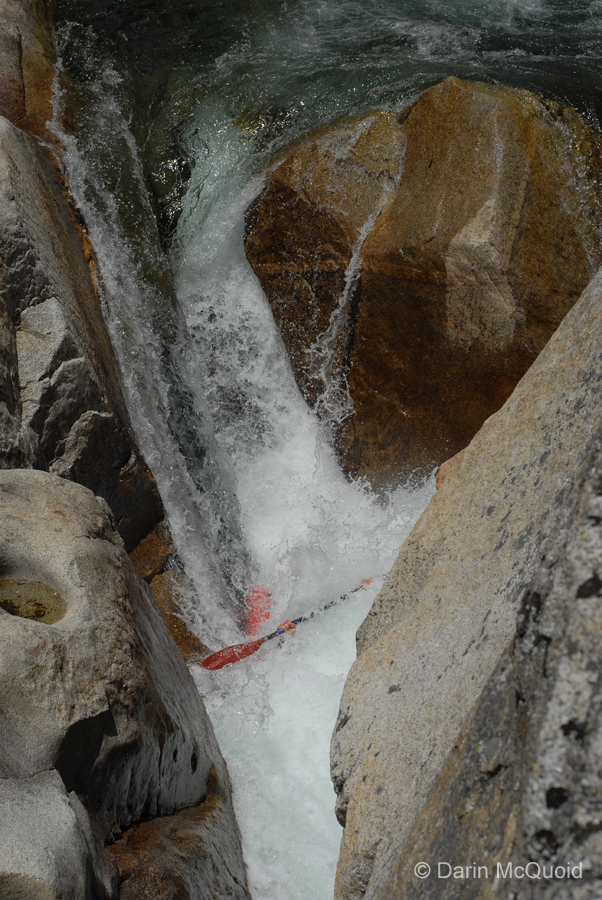 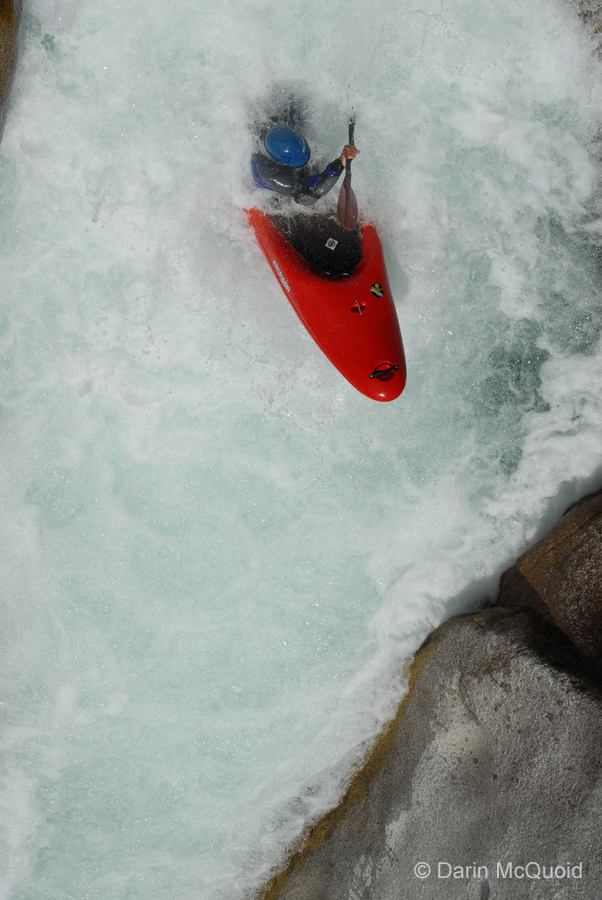 The second part that Ben and I launched in for was a narrow alley way into a tight smear move.

Chris Korbulic in the alley way. 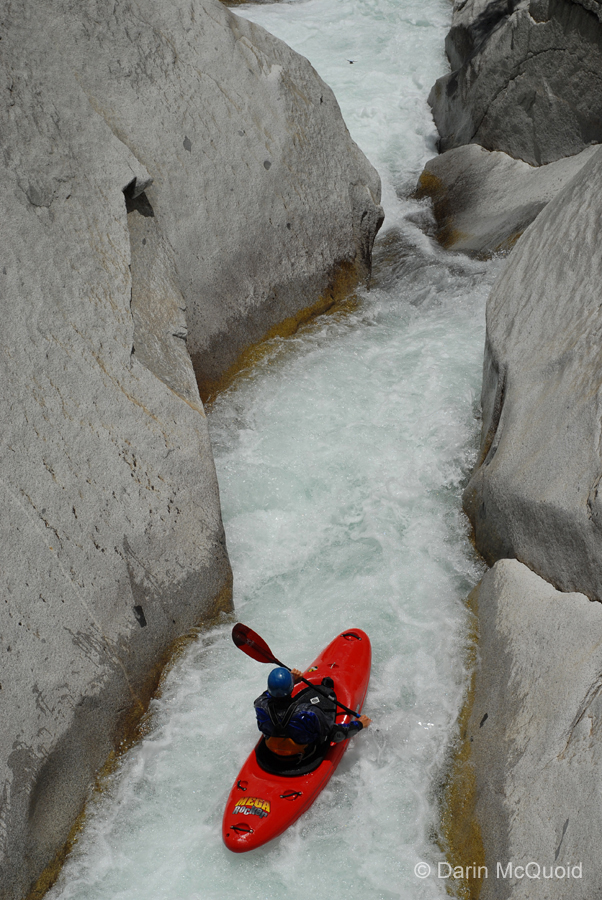 Chris Korbulic moving into the smear, as the downstream view shows the gradient. 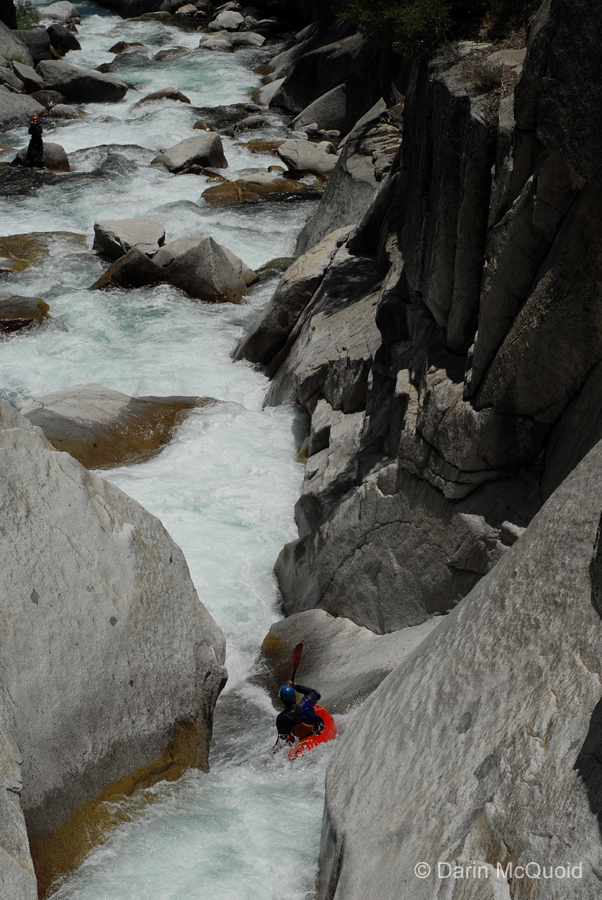 Ben getting into the goods. 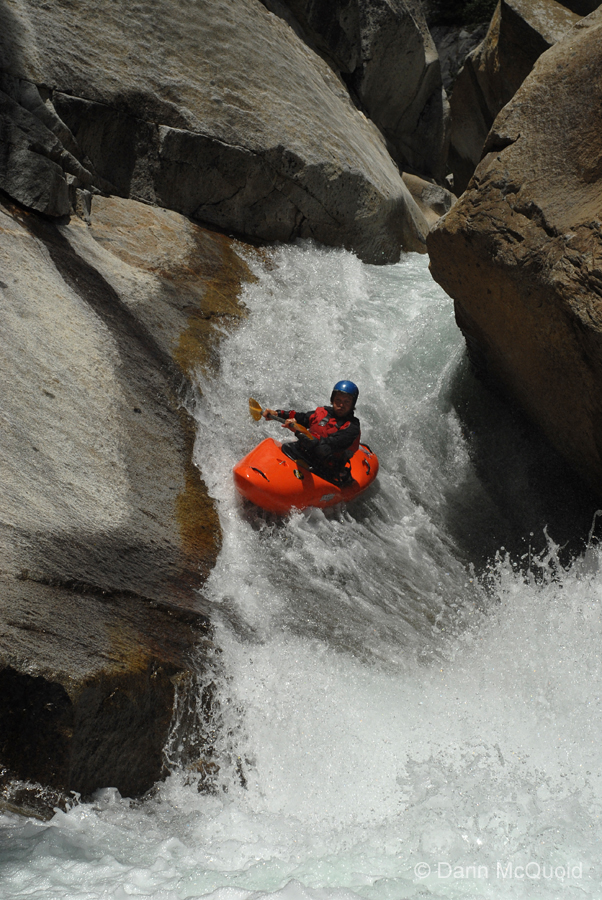 The run out from the smear was a nice long boulder garden that wrapped around the corner.

The author in a little mank. 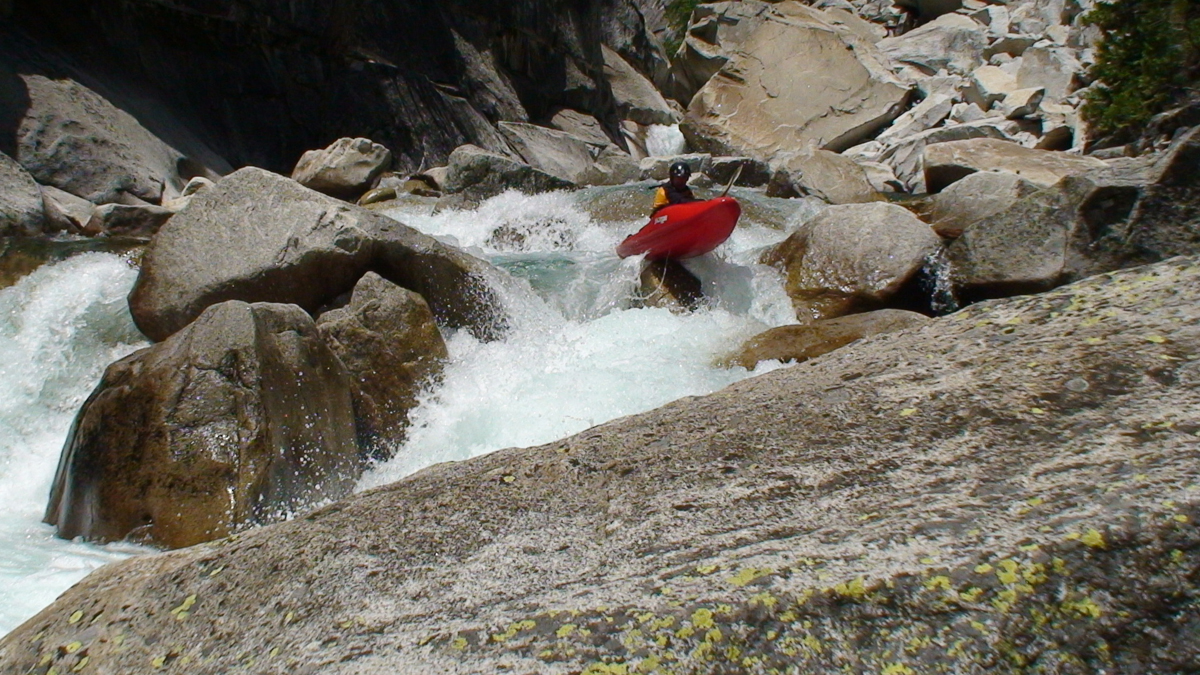 As the river wrapped around the corner the gradient increased as the gorge walls rose high overhead, and continued on far downstream. Not wanting to get locked in we decided to climb high on the right for a scout. Walking downstream the gorge was considerably longer than we had originally thought, and we ended up hiking downstream to an open dome, where we could see the gorge taper off. From above we could see five portages, all possible at or near river level. Directly below the dome we saw part of a large rapid, but couldn’t get a view of the whole thing and it looked like we could figure it out at river level.


Chris Gabrielli and the author on the extended scout. 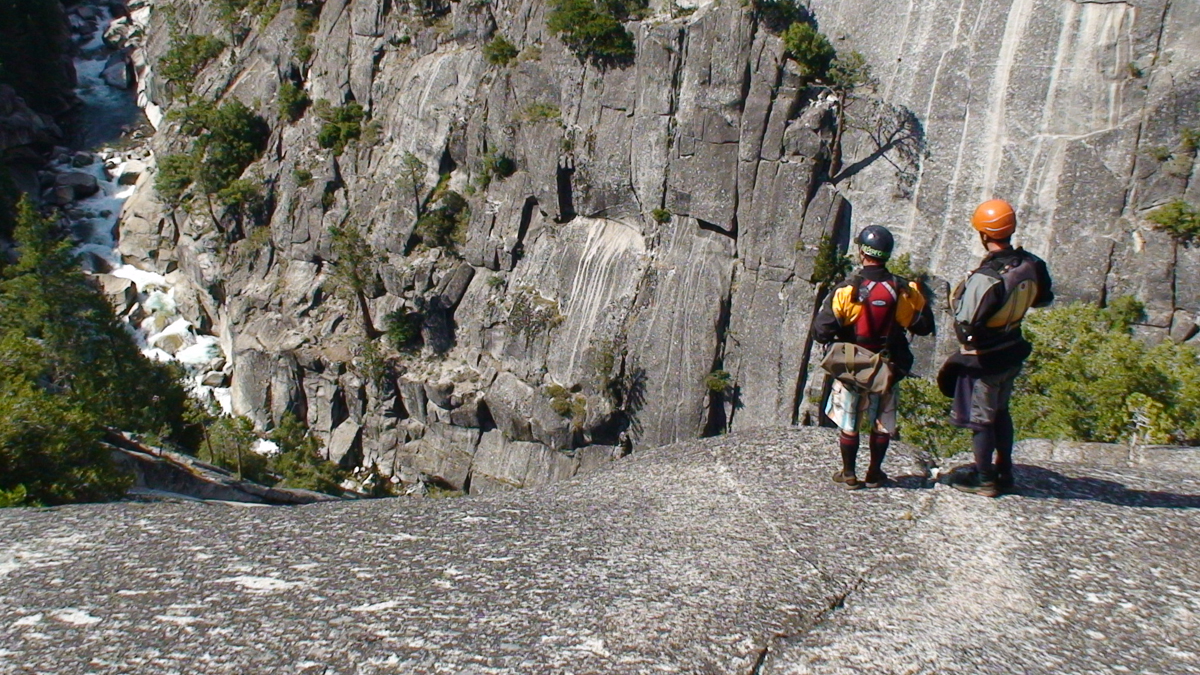 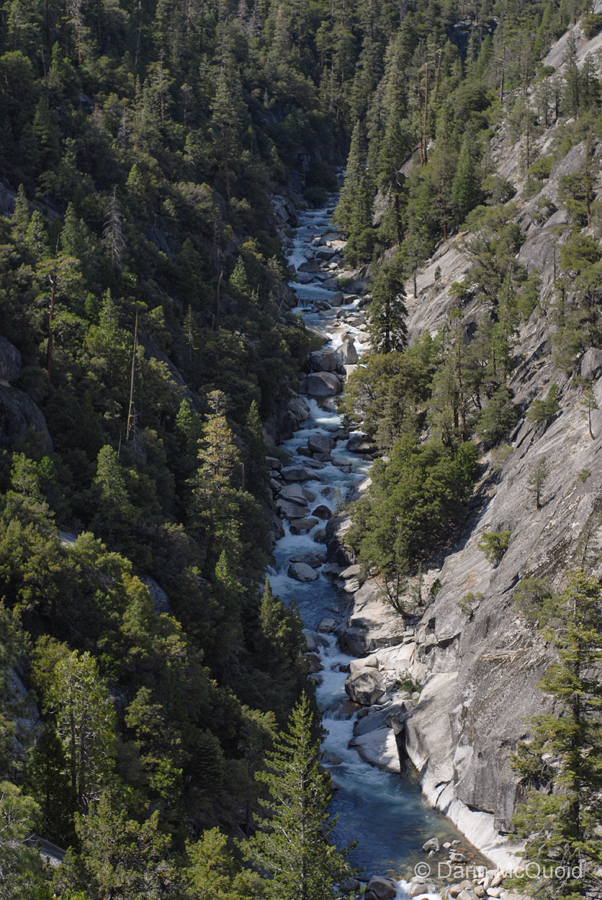 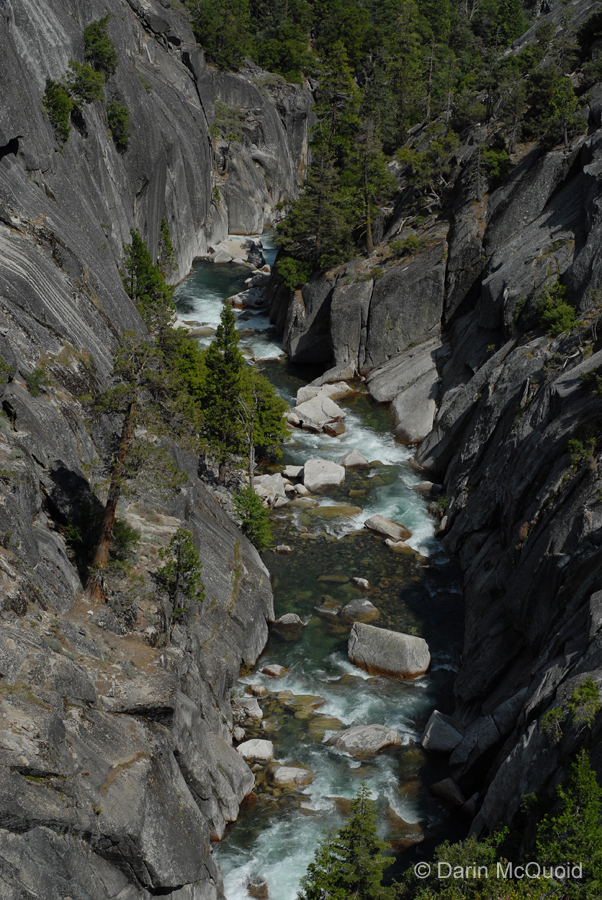 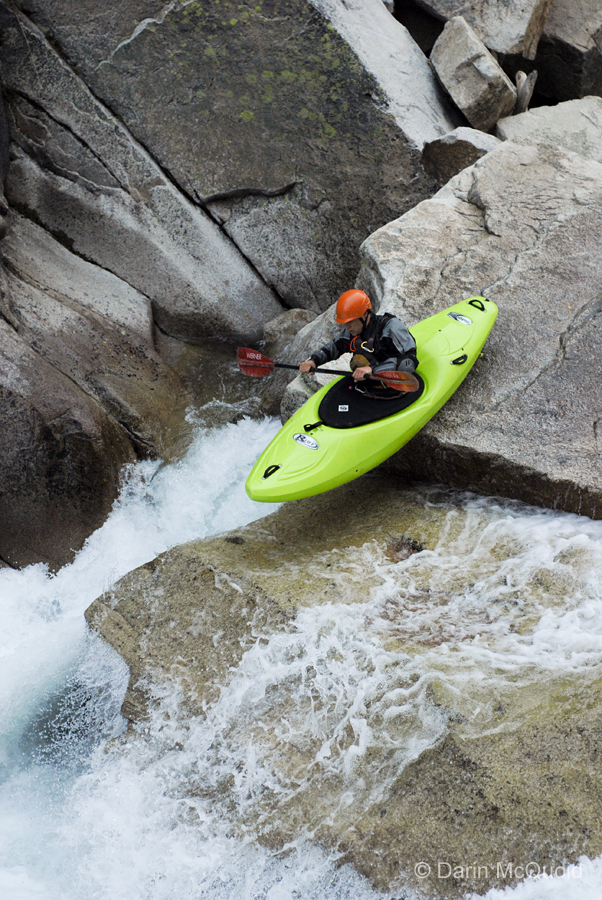 Back at river level the portages were tougher than they had looked, but we made good time to the corner below the dome. The rapids were still large but had clean lines, and Ben had his camera out more than I did.


Chris Gabrielli down in it. 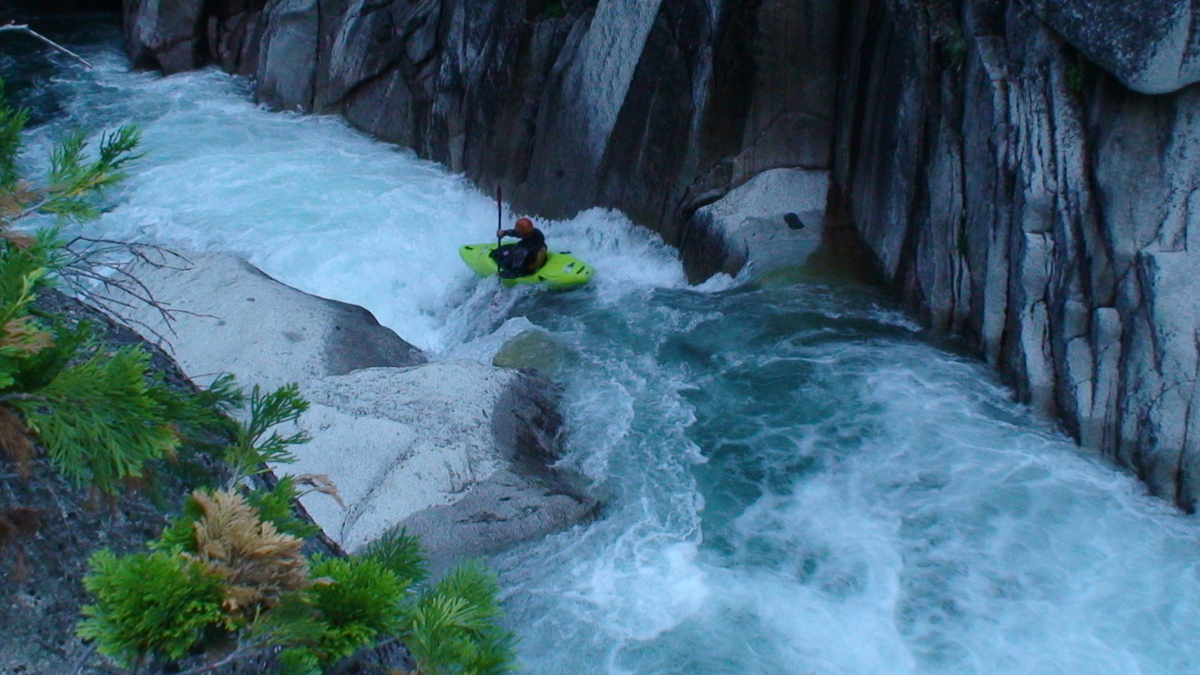 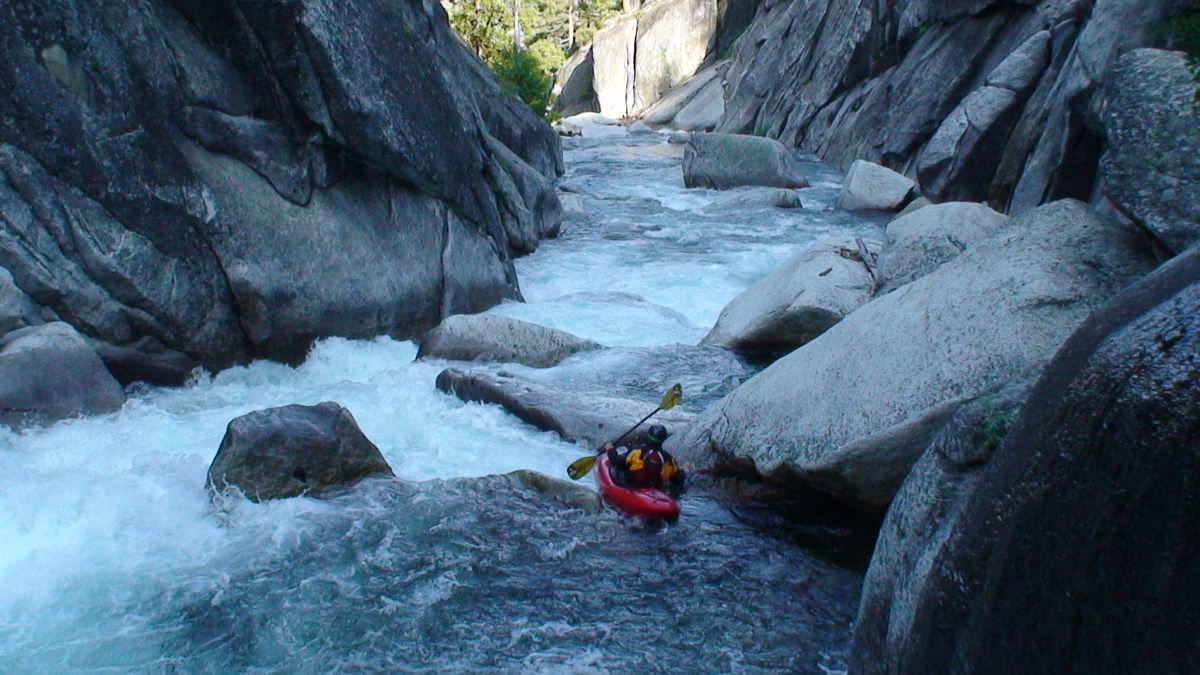 Large rapid followed large rapid in this section. All very walled in, but we were able to scout where necessary and make decent time. 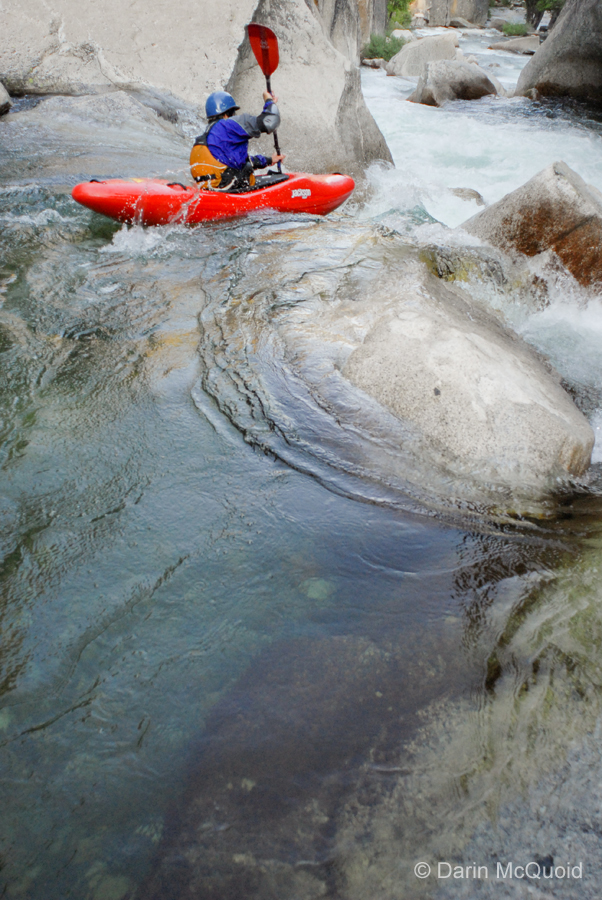 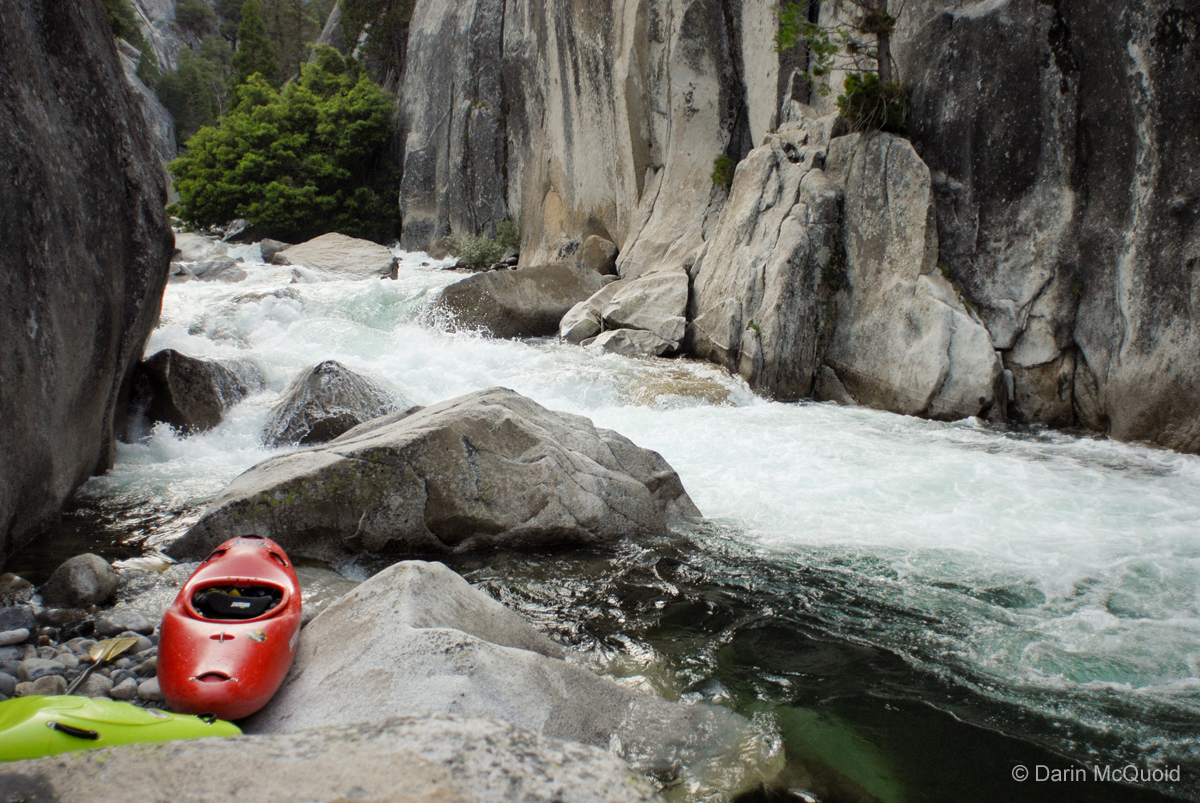 Ben Stookesberry pushes through a big boulder garden into the walled out section. 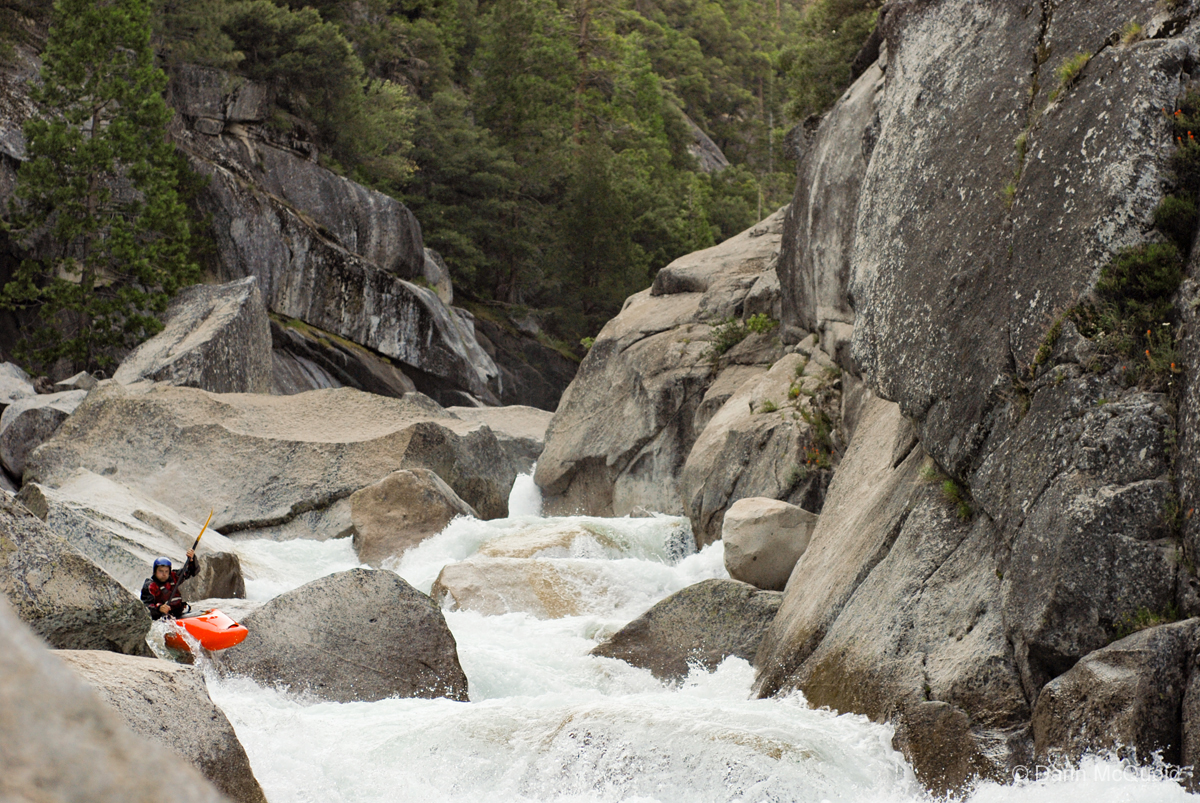 From two rapids above we could tell that the rapid we hadn’t been able to scout wasn’t going to be as easy to deal with as hoped. There was a great eddy at the lip, and we could get out on a rock, but not see over the horizon line. We were completely walled in. The only option was to send someone down to the eddy above the larger horizon and hope the rapid went, or that a portage might be possible.


Chris Korbulic decided to take one for the team and drop into the eddy. 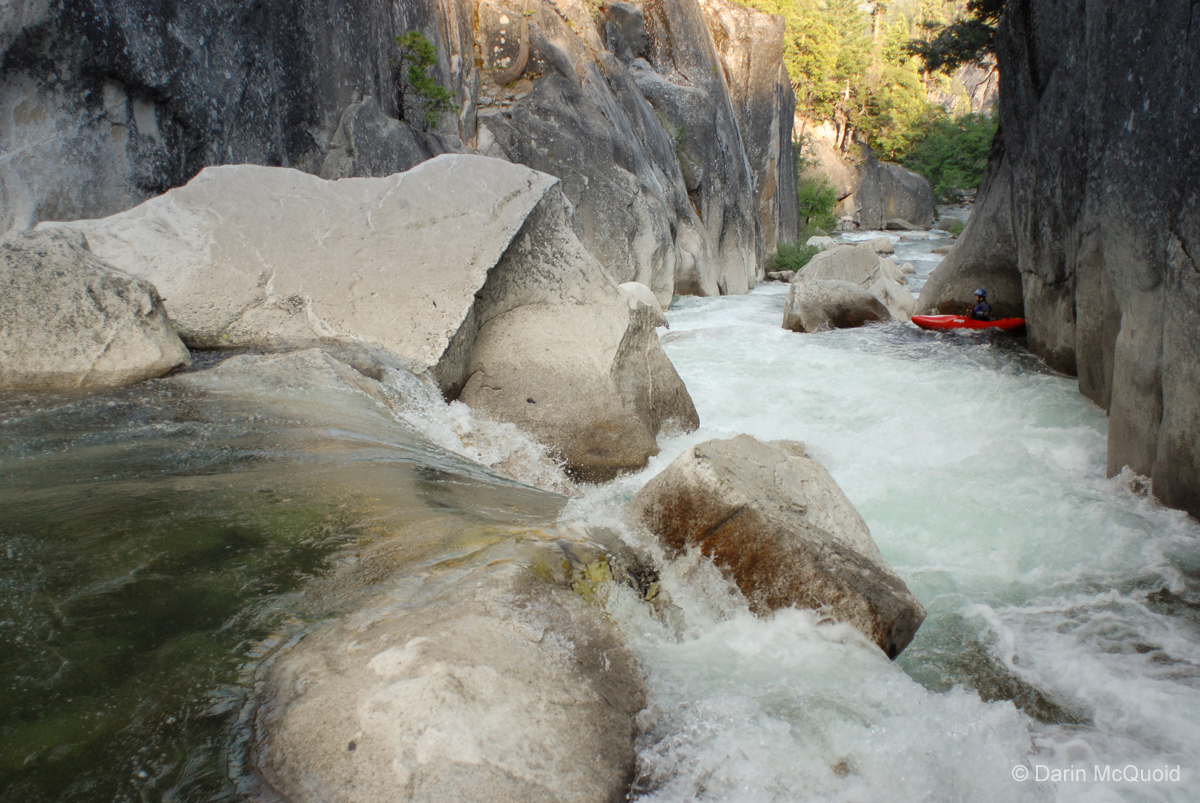 From the eddy Chris could see the ledge was clean, but there was another large drop downstream that wasn’t visible from his eddy, and he ran the ledge while I dropped into his eddy to maintain our line of communication. The final ledge seemed to be a bit of a mystery, but Chris saw what appeared to be a good boof left of center, and wanting to get pictures I opted to probe, and his line was perfect for the rapid.


Ben Stookesberry on the first drop of the un-un. 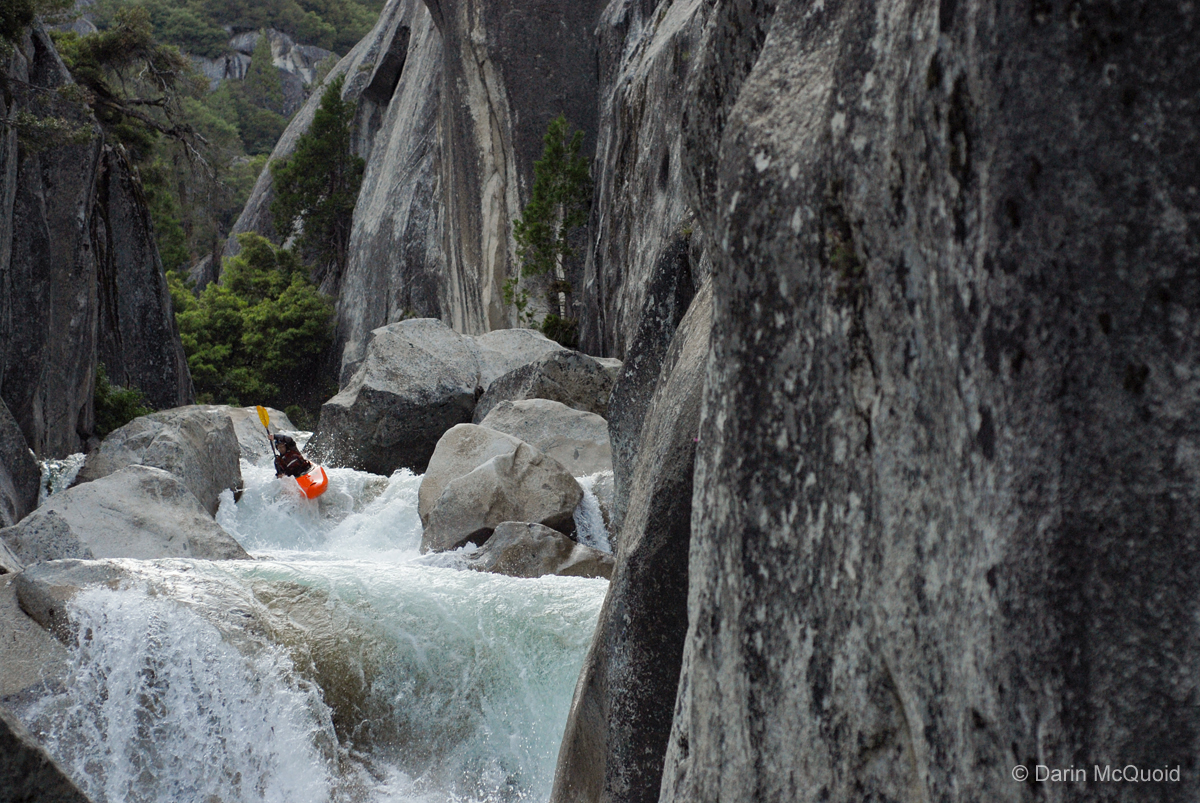 As we finished the big un-un rapid, the river turned a corner and stayed gorged up. We had another large horizon line through a rock jumble, and while scouting found the first flat spot we had seen since putting on. The sun was already out of the canyon, and with unknown gorge length before us we decided to camp in the middle of the gorge.

Continue on to day two.