After seven days of travel and dealing, we were ready to get on the river. Deciding that we didn’t need an early start and it would be one of our last mornings to a nice motel, we slept in and enjoyed a nice breakfast. Enjoyed relative to the participants’ health, several of us stuck to a light breakfast before the last bit of driving. The river winds through the Skardu Valley in several braids before rejoining and dropped into the canyon, so a relatively quick 20k drive was in order.

Getting ready at our put in on the Skardu Highway. 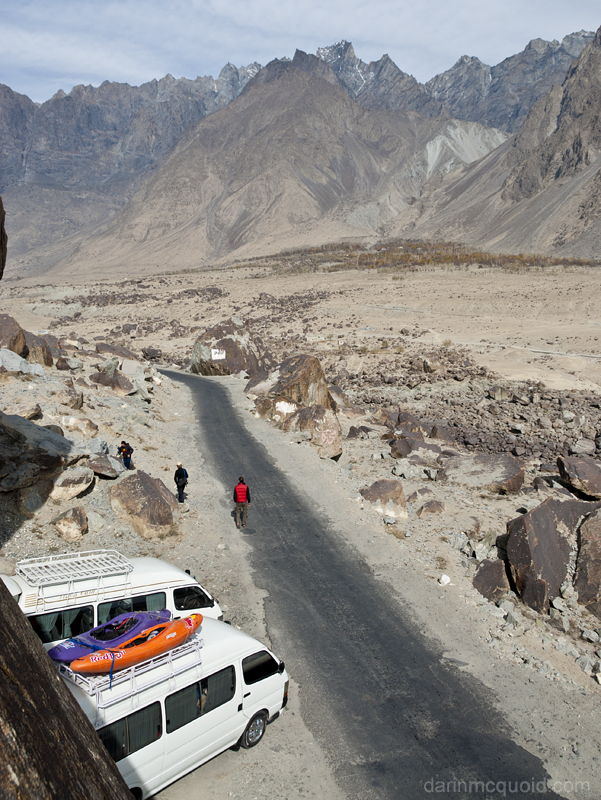 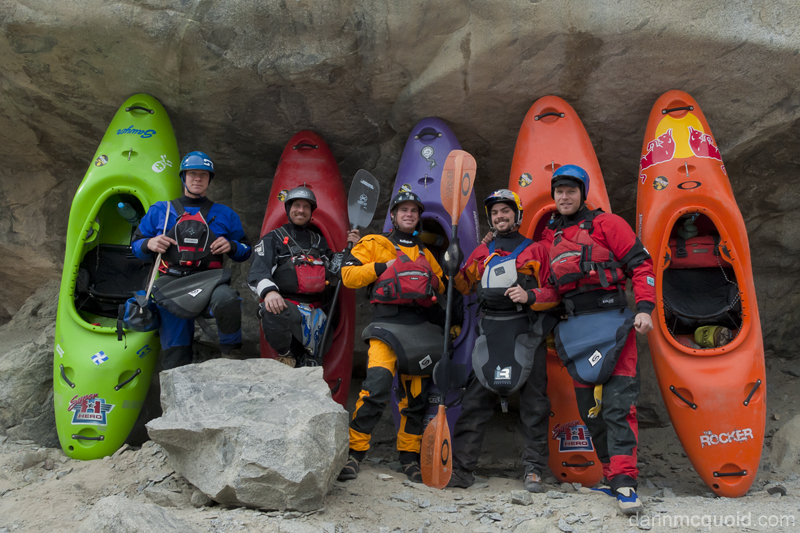 We all had personal promises to ourselves, if we could make the hike to the river without throwing, then up we’d put on.


Phil about to reap the rewards! 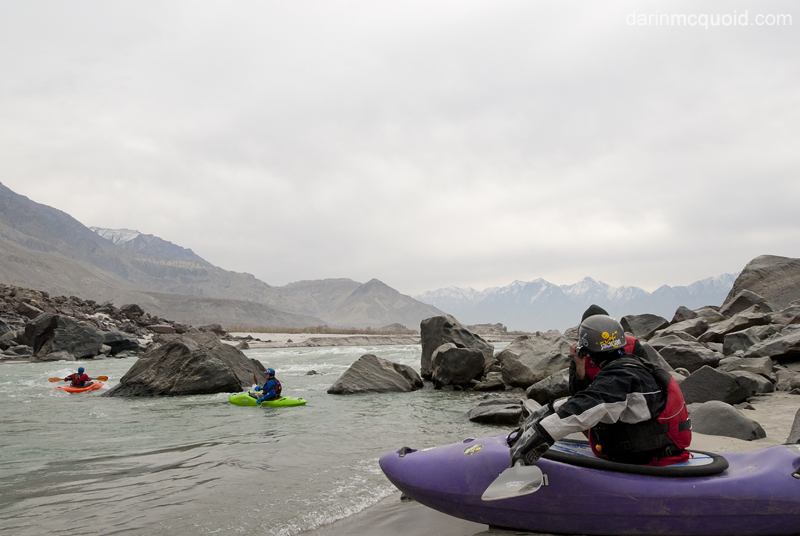 Generally big water has big rapids and really big flats. We were convinced there were some big flats that we hadn’t seen from the drive up and that standard “big water millage” would be covered. The first days estimate was for 45k, it looked to be a nice warm up section.

With the whole group on the water we tried to get a feel for the river on the first few class II rapids. Everyone was feeling week but we wanted to get into it, and hey, at least we weren’t hitting any rocks.

Every river has it’s own unique style, and we had high hopes that the Indus would be full of read and run rapids, some boat scouting and the occasional scout or portage. Ben started in the lead, and dropped over the first somewhat significant horizon line while the rest of us caught eddies. All I could see from above was a paddle blade up in the air for an extended amount of time…not good. Rafa followed with similar results, and the rest of us popped out to take a look.

Ben and Rafa had safely surfed out of the hole and worked into an eddy on the right to finish scouting. As we walked down the boulder strewn shore, throngs of people gathered around us to talk as much as possible, and eventually watch us run the rapid.


Rafa Ortiz runs the lead in of our first rapid. 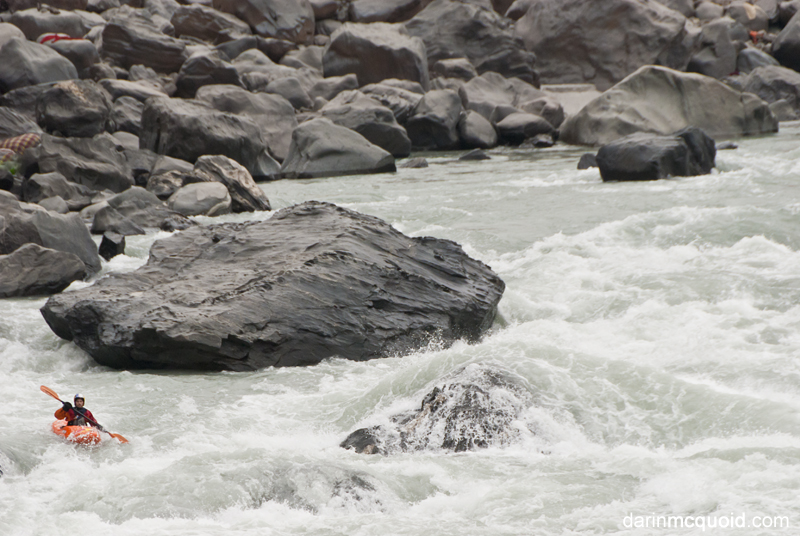 Rafa finishing the rapid while locals look on. 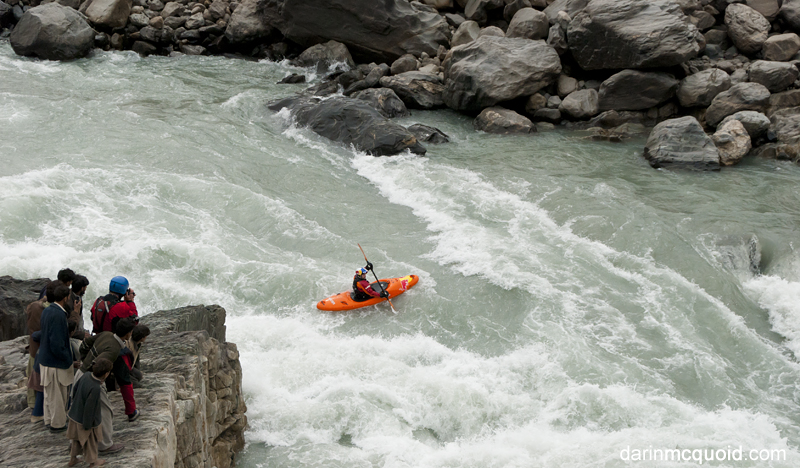 Little did we know how much this rapid would set the dynamic for the Indus.


Chris Korbulic in the same rapid, it’s amazing how the 15,000’ peaks drop straight to the river. 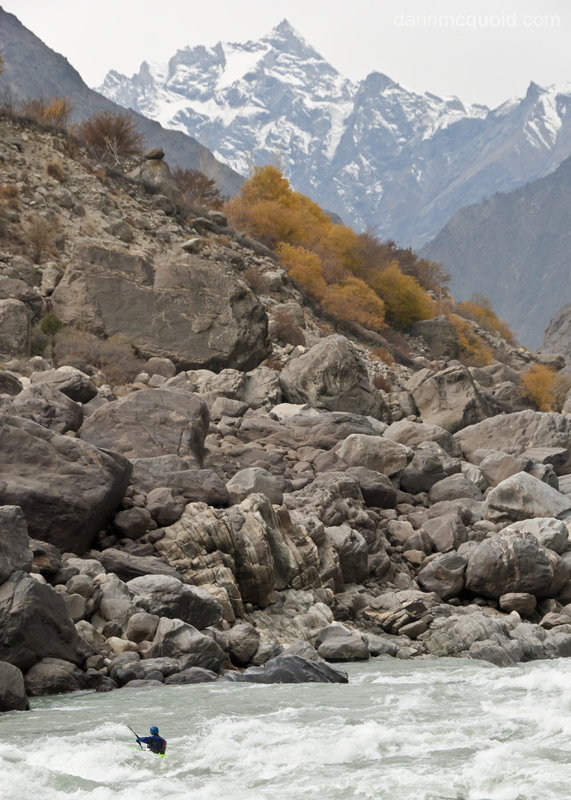 As we approached the next horizon line Ben scouted even though we all remembered the rapid from our drive up. We knew it was a big wave train, but as always it’s amazing how much larger features are at river level. I was already too tired to scout, and Ben signaled to me with “down the middle, it’s big”.

Paddling into the drop I was awestruck by how large the waves were. Thankfully I remembered to keep paddling, and made it through several waves before getting knocked over in the largest wave. I was in the main current, so rolling up was fairly easy and I paddled through several more waves before making it to an eddy at the bottom, breathless and elated.


Phil Boyer at the bottom of the wave train, note how small the vans look too. 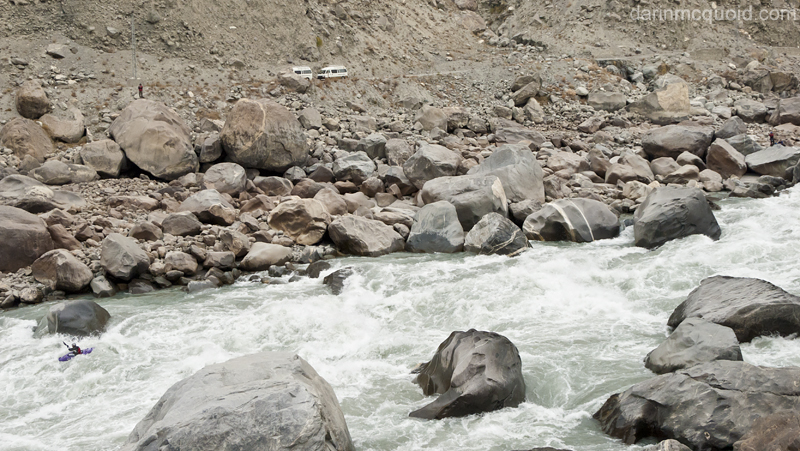 I knew big water was hard to capture in photos, and I wasn’t let down by just how tough it was, especially with the dark lighting.


Chris paddling down the glassy entrance into the wave train. 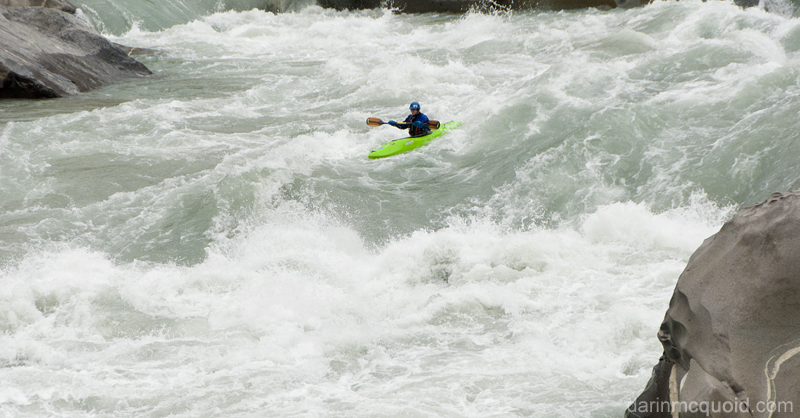 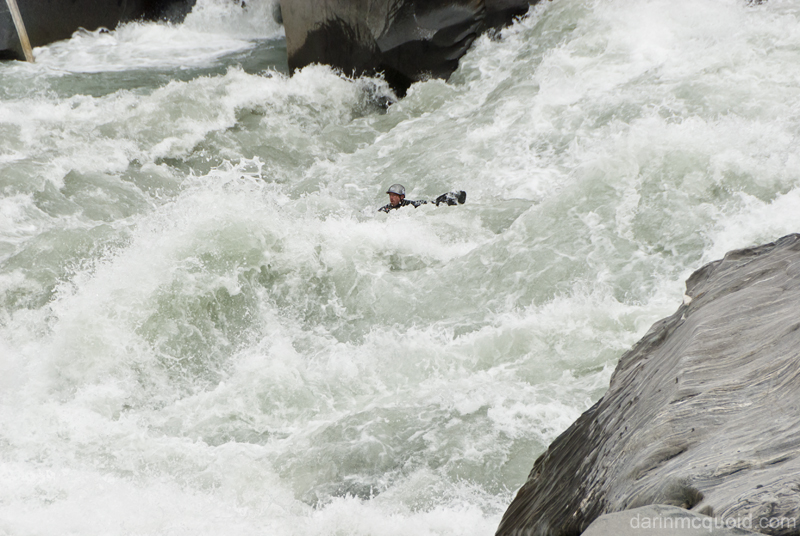 Rafa keeps it upright after a big wave. 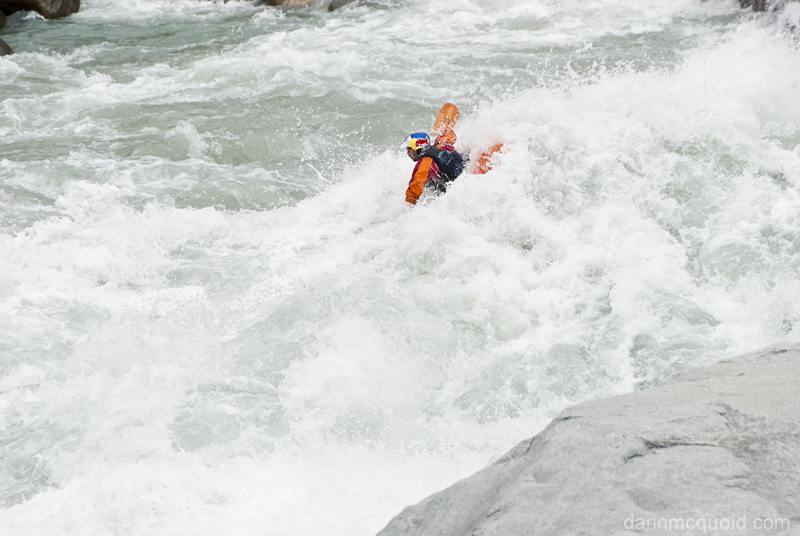 We were all feeling a little under the weather, and the first two rapids were a painful reminder of how much more work big water is. When creeking most rapids only take a few strokes, but on the big water we had to take a hundred strokes just to cross the river and line up for a rapid, and as many trying to make the line. Still, the rapids felt so good we were excited to see what lay down stream, and the next horizon was within sight, no waiting required.

Rafa hopped out and gave the rapid a quick scout, said it was good down the left and then to move left again at the bottom, adding in “just don’t go right at the bottom”. Rafa ferried all the way to the left side of the river and descended out of sight, and after a few seconds I followed. 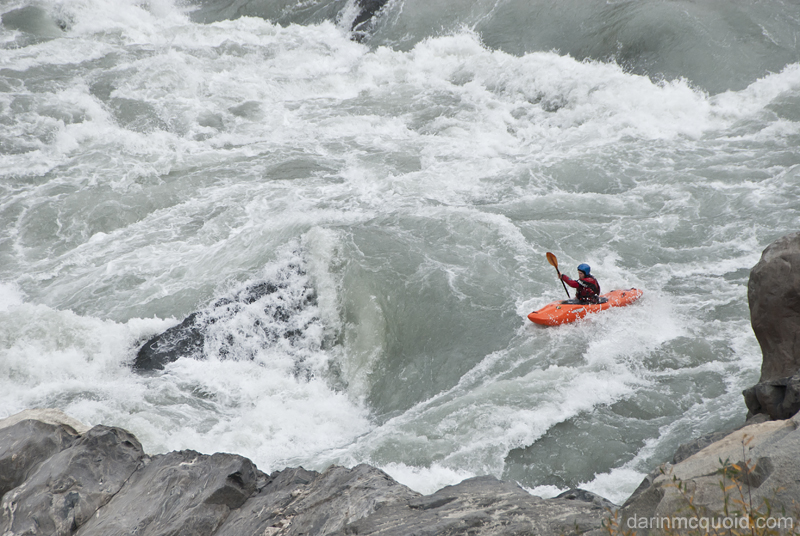 Coming through the entrance I was knocked over, but rolled up with nothing on my mind but getting left. Working left I was amazed to see the largest hole I’d ever seen in person, and I was trying to sneak through to the left of it, and started paddling harder. As the wave crashed over me and I came through upright I was only too relieved to escape the hole.


Phil punches the left side to exit safely. 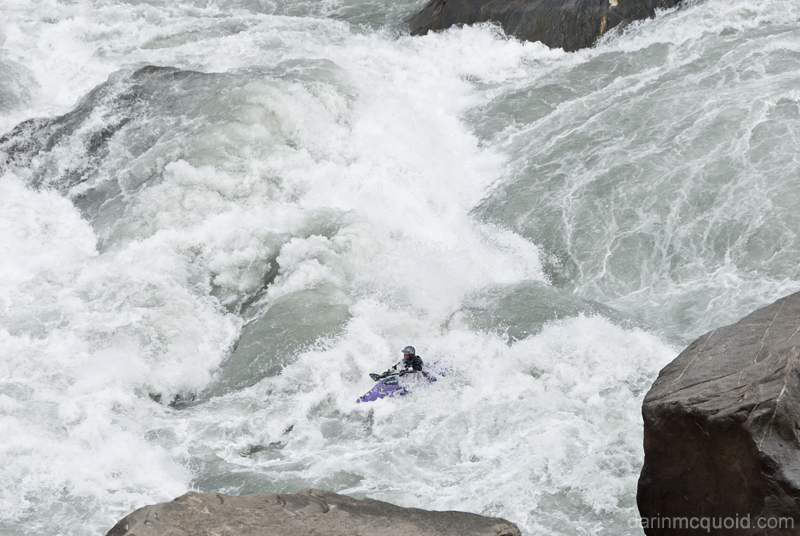 Bending to the left, the river took a big plunge and we exited our boats to take a look. I was completely exhausted, probably from not really eating in the last two days because of the flu. The team scouted while I fell asleep on the rock, and I decided if it was a portage it would be in my best interest to hike up to the road.

The boys came back lacking smiles, it was too big of a rapid to deal with this early on. I was convinced that I could hike my boat up, but they insisted otherwise and helped me hike out. Thanks to the team on this one, halfway through the climb out I realized I wouldn’t have made it with my boat. Crossing through several fields to find the road, we attracted a crowd from the village and Ben was able to converse fairly well with them while we made radio contact with Roland. One of the farmers was kind enough to share dried apricots with us, perhaps not the best thing for an upset stomach, but a very giving gesture for someone who had so little. This incident would set the tone for our interaction with the people of Pakistan, they were friendly and giving the whole trip. Roland arrived to pick me up, and the team returned to the river and started work on completing the portage.


Something noteworthy in this photo, besides the river wide ledge hole at the bottom of the rapid, is the white mark thirty to forty feet up on the bank is dried algae left by the “normal” flows. 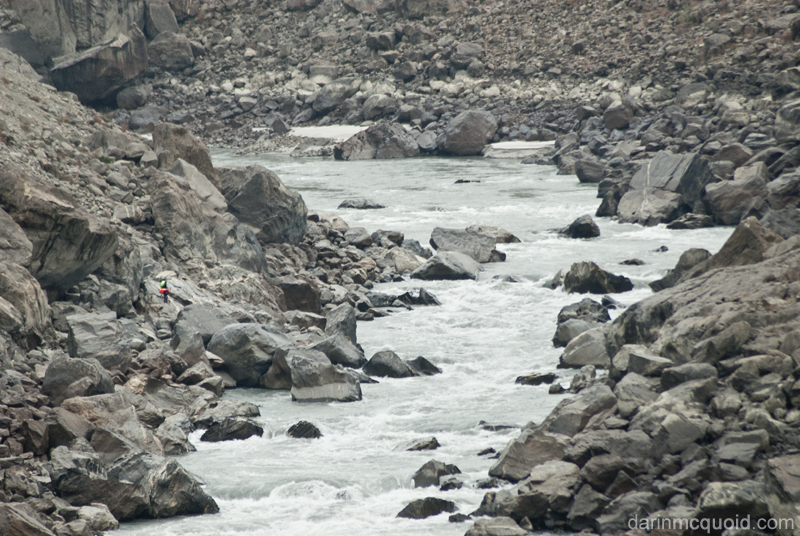 A pristine sandy beach awaited the team post portaging, and they setup camp for the night while Roland, the drivers and myself searched out road side lodgings. 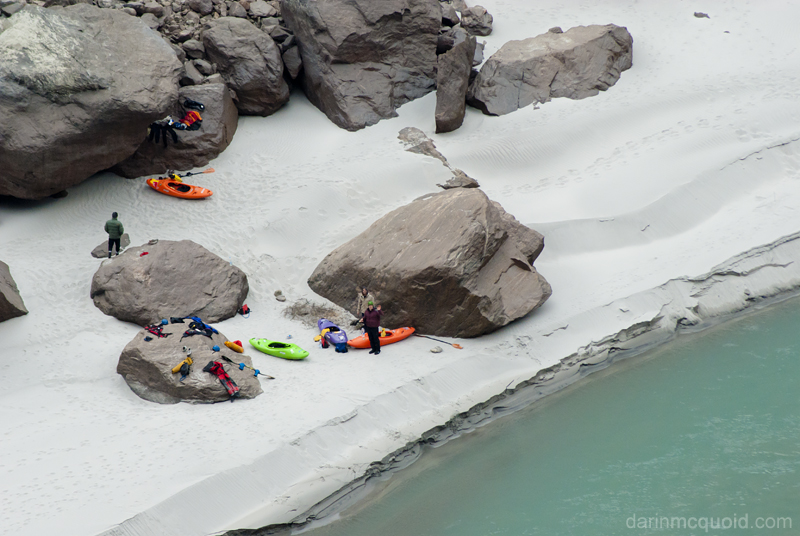 We fell far short of the distance we expected to cover. Perhaps 10k into the Indus we were impressed by how powerful the river was and the potential for big rapids that lay in store. We were also in admiration of the local people and happy to get some more rest before the next day.