Deliberation. Waking in the morning our group was on the fence again. Rocky voiced concern that the portage would be impossible and wanted to look into it more. With all our gear packed we were ready to go, but team solidarity is the name of the game. None of our group had kayaked with Rocky before, and didn't know if this kind of deliberation was typical or not, so we agreed to stick together and wait while he made some phone calls.

During his years exploring river canyons in the Sierra Occidental, Rocky made a lot of contacts with locals including a few in this area that had done extensive canyoneering. It took us a fair while to find an operable phone, but once we found a working line options were discussed while Rocky was inside. We all agreed that to a large extent we were Rocky's guest on this trip, and that it wasn't fair to put on a river if a team member was uncomfortable with the situation, so we'd hike in below the confluence.

Rocky was able to make contact with a friend who, years ago, canyoneered the steepest section of the canyon with an experienced group and several hundred meters of rope. Two thirty meter ropes. Not exactly as much as the canyoneering group, but they had assured Rocky we would have no trouble traversing on the right and getting back to river level below a six hundred foot waterfall. Great, we were back on! 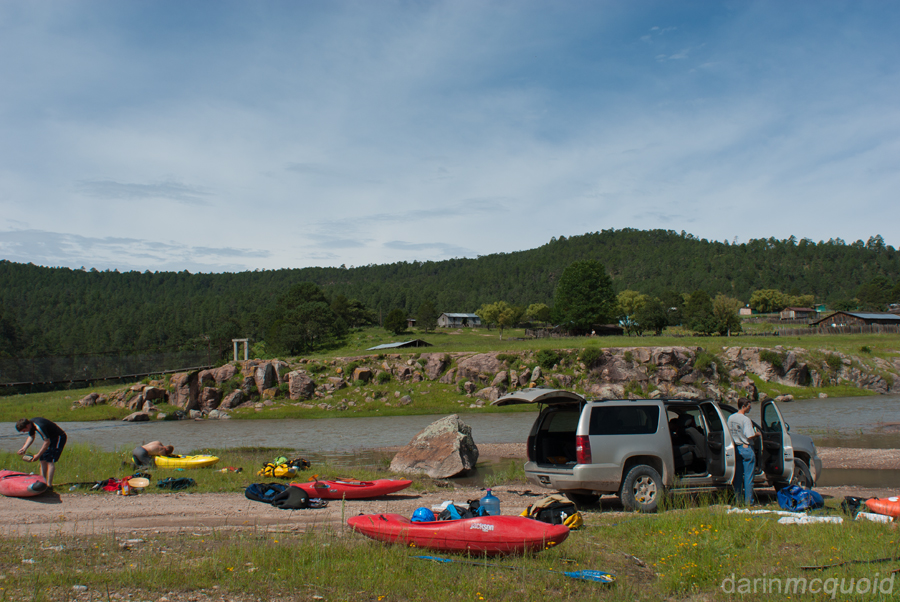 Anticipation at put-in was still high. Flows were slightly lower, but we had forty miles and six thousand feet of gradient to go. The Rio Piaxtla flows through a remote wilderness of dense jungle at river level and high desert on the plateau. Hiking out was a bleak option, it would take several days of hiking to exit the canyon and travel across the plateau to find a road, so we packed our boats with eight days of food knowing that a downstream exit was the only viable option.

Our unspoken goal for the day was to get beyond the large spire we had seen deep in the canyon on our reconnaissance. As we paddled our heavy kayaks down the silty waters of the Piaxtla we were already prepared for this to be an adventure of immense magnitude, while the first few miles would be easy it could only last so long. The gorged out section we saw was probably just the tip of the iceberg. 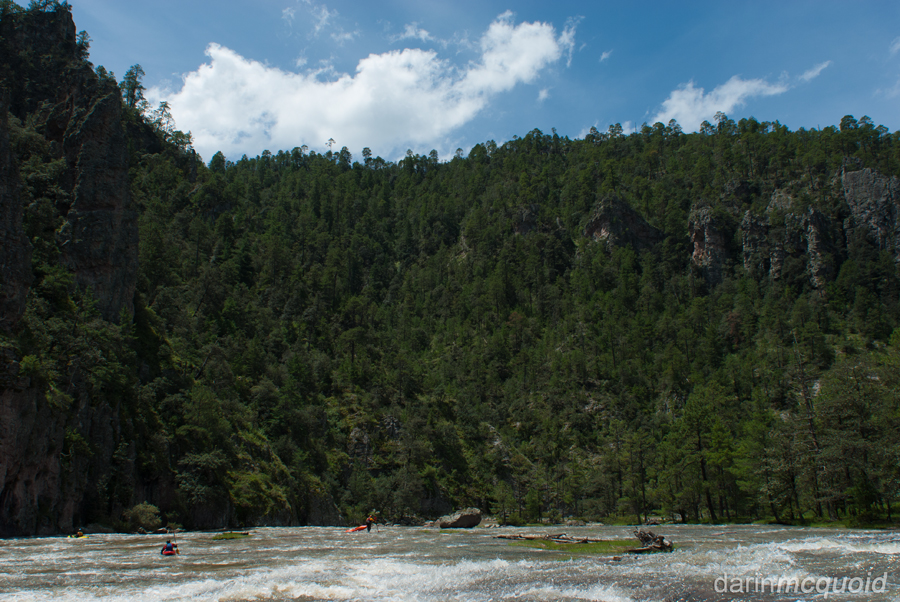 The open class II let us relax and get a few strokes in before ending after a mile, and some larger rapids started to pop up. Ben runs the first scouted drop. 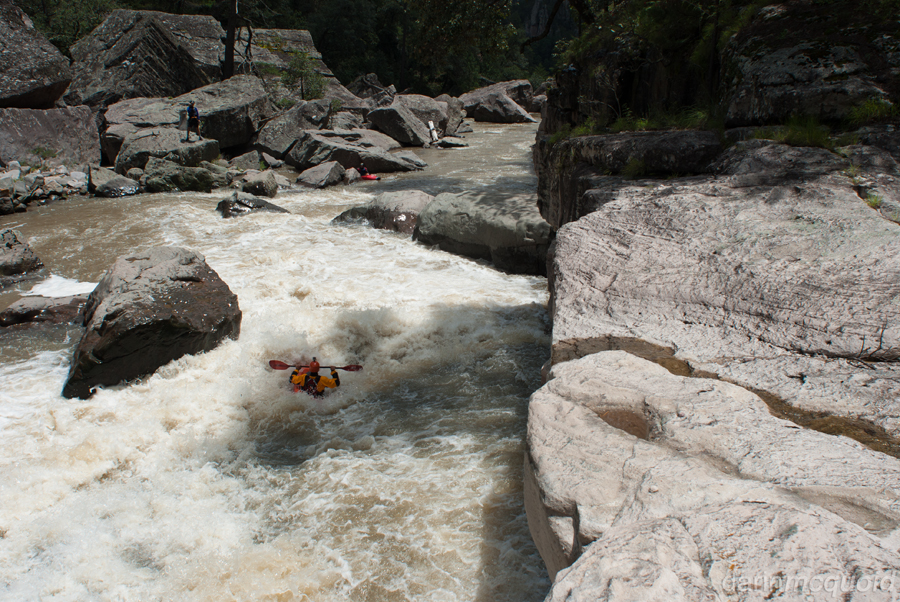 The slides started intermixing with boulder gardens, and after a short distance and a quick portage the river had more boulder gardens than slides. The water level seemed just about perfect for getting downstream without hitting too many rocks, and I was in awe of the constant scenery.


Jesse Coombs soaking it in. 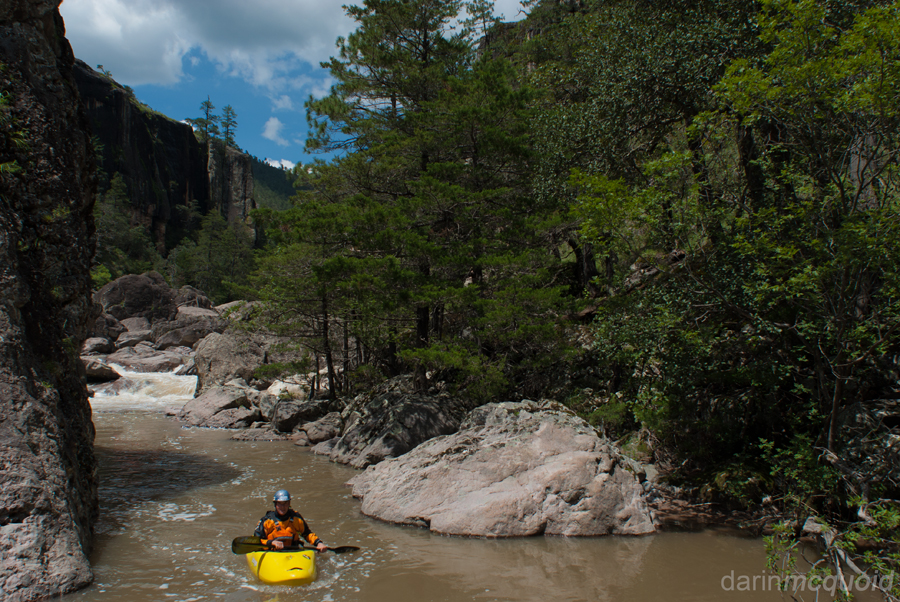 As expected the river started to get steeper, but was maintaining a surprisingly pleasant character of larger but still navigational drops, and of course a fair number of portages.


Looking back upstream at a nice early falls. 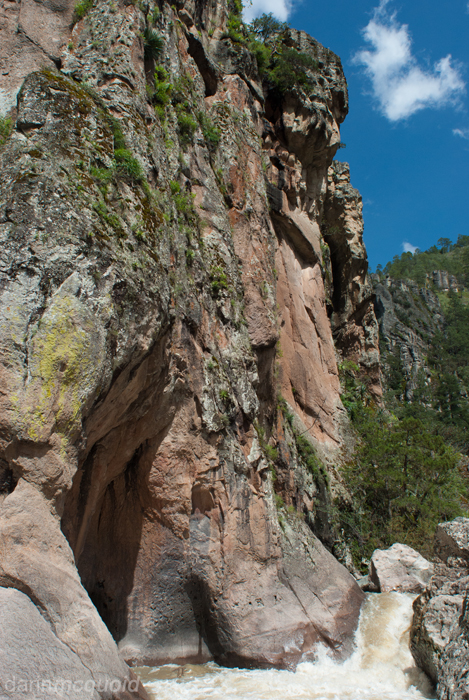 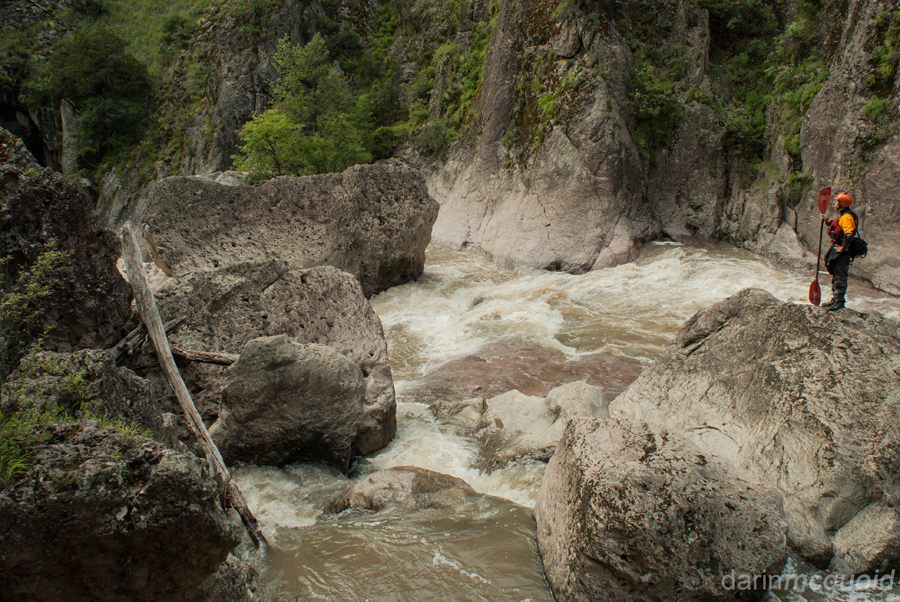 James, Ben and Rocky above a large horizon line in the canyon.

The horizon line proved to be nothing but a nice fun slide and falls, Rocky Contos enters. 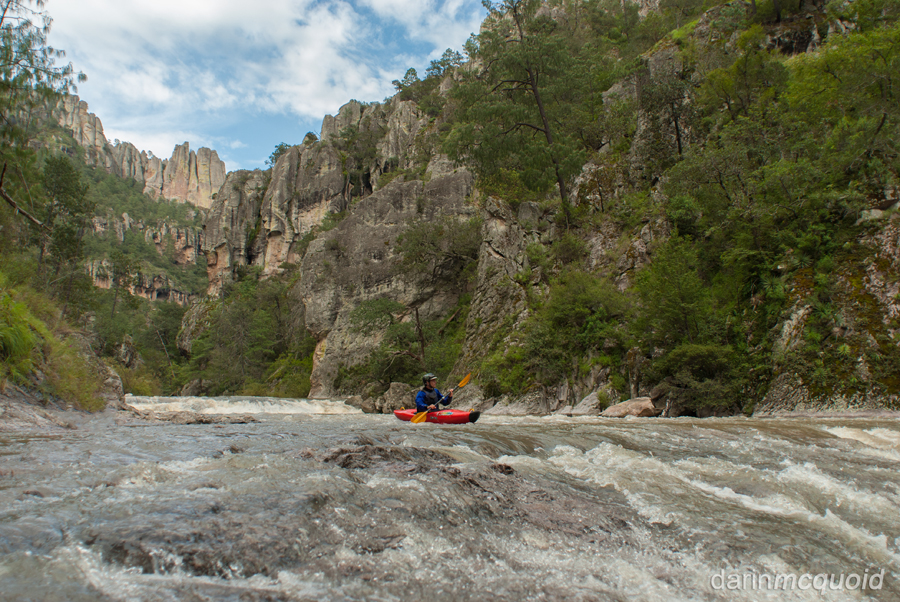 Jesse Coombs at the horizon line. 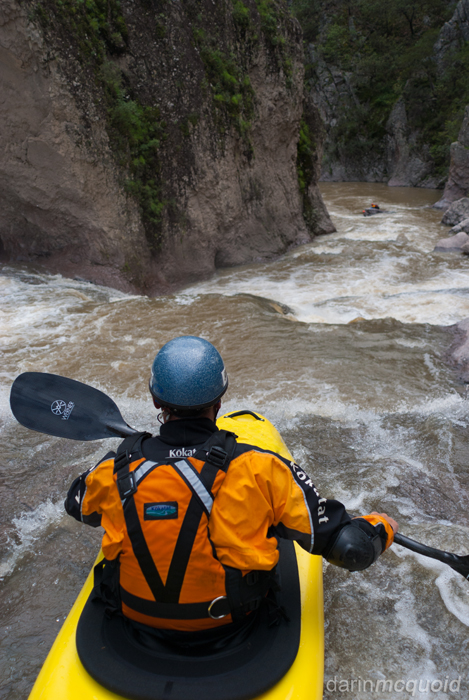 We were glad to be making decent time. Although we had nearly a dozen portages under our belts, all were river level and not too time consuming. Jesse emerges from a beautiful section of river with a peculiar spire in the background. 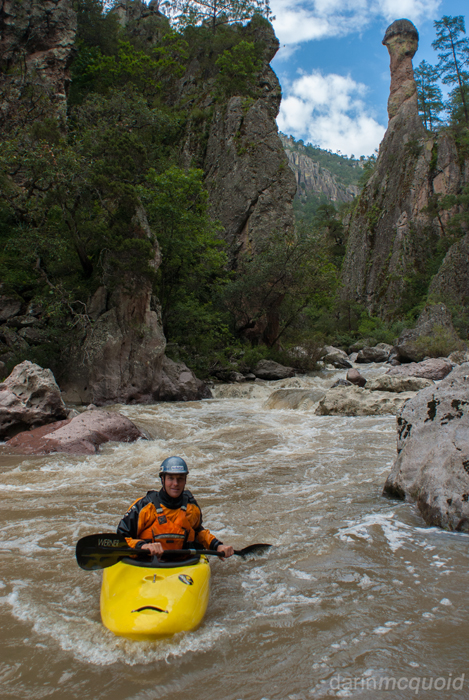 Approaching the spire section the river steeped considerably and forced us out of our boats more often than not. 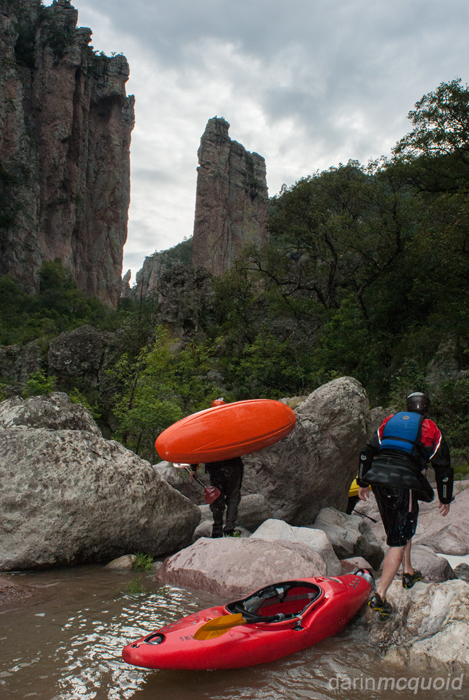 From above we'd seen a large cataract just above the spire, so the large drop was no surprise. We spent some time scouting it, but there were no viable lines in the unusual falls. Most of the water fell into a shallow pothole in the center, and our best option would be to ferry across and get our rope out for the first time on the journey. 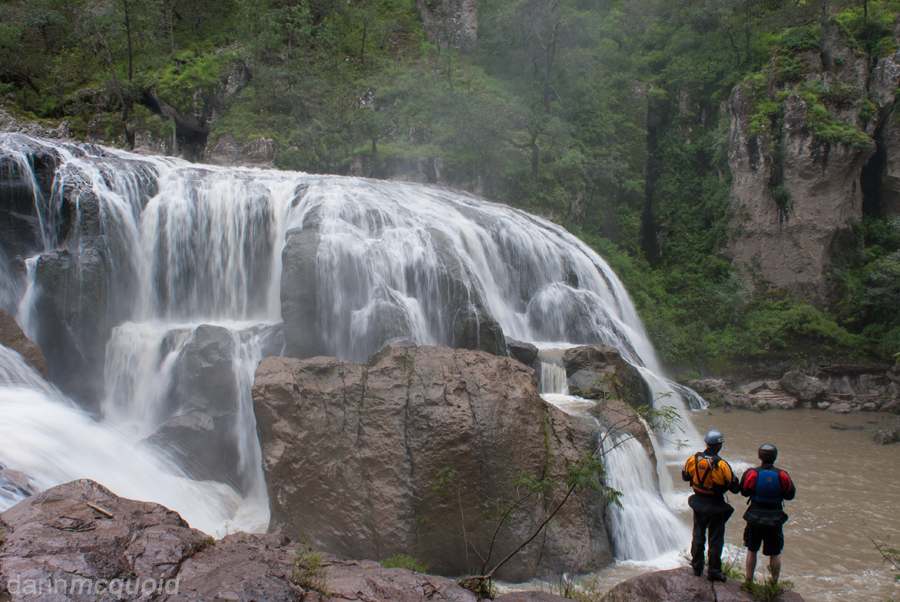 Technical portaging but still at river level, Jesse passes down a boat. 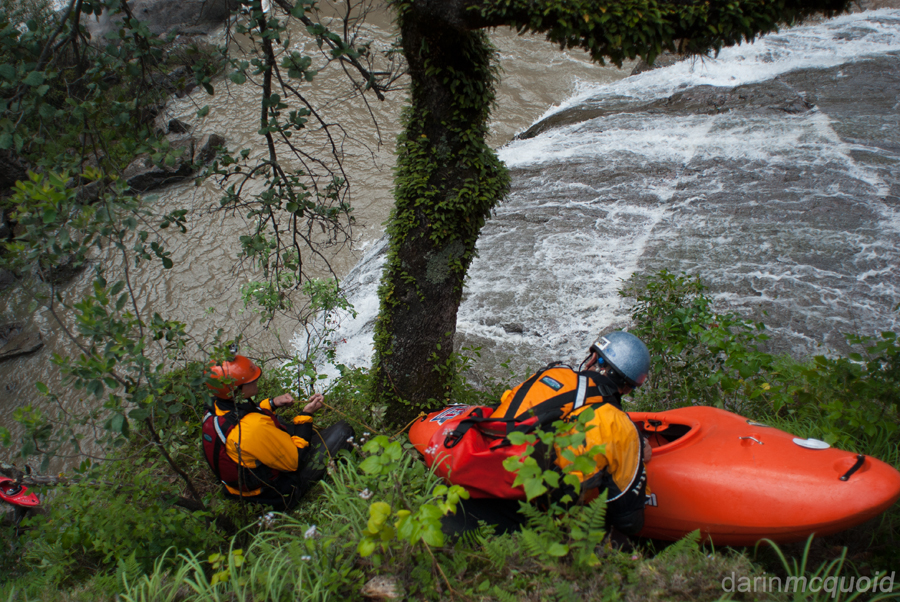 Technical portaging always eats up time, and this one was no exception. Below we ferried across for an extended scout around the spire. Water cascaded through narrow, unfriendly cracks as the waterway wrapped around the spire, until it eventually spilled into a pool downstream of the monolith. Below the pool was a ledge, leading into a vertical walled gorge with no portage options, and no end in site. 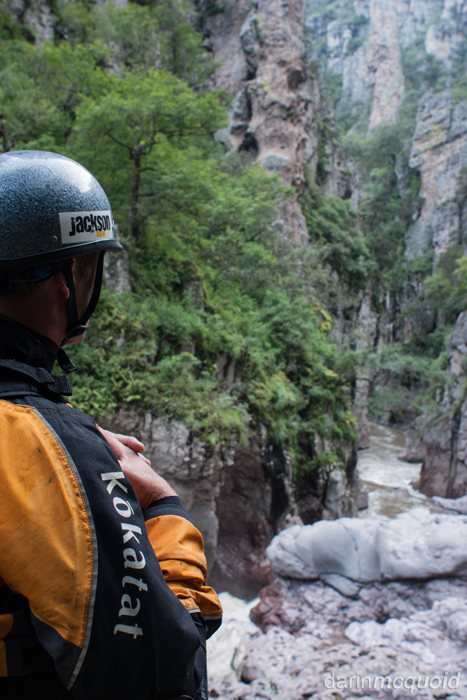 Dusk was already setting in, the mornings indecision had cost the group several hours. We manged to put-in just after lunch. Not bad for a half day; we had just barely reached our goal. We set up camp in the best spot we could find. 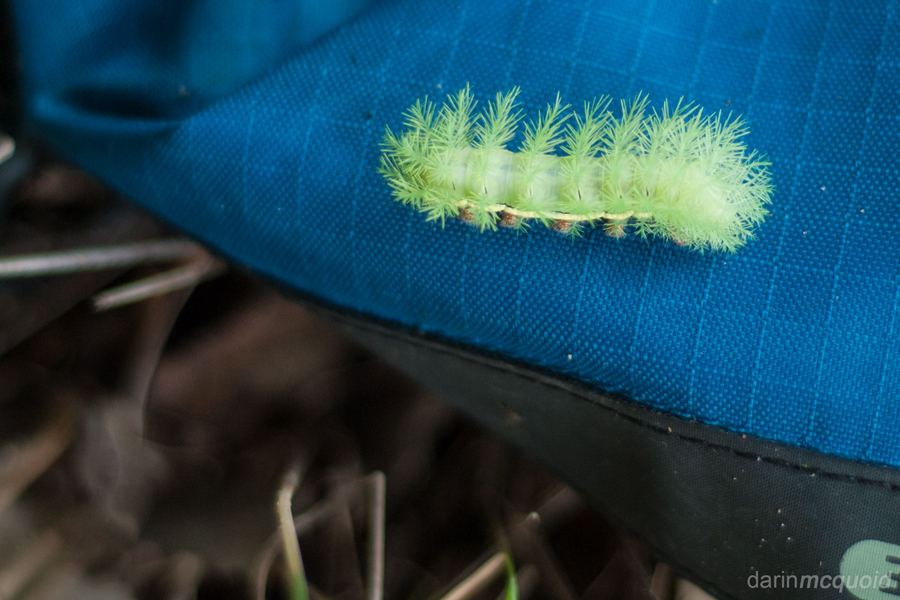 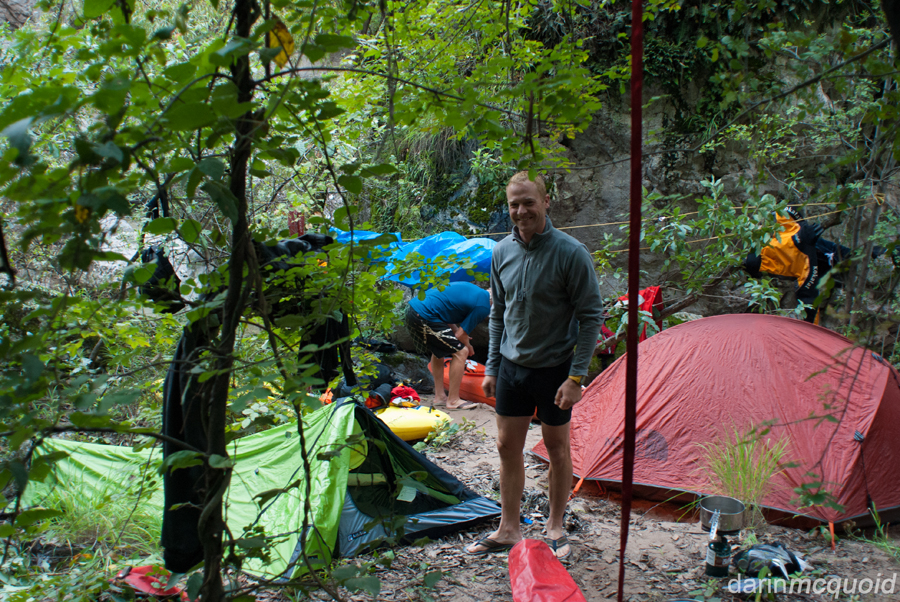 It was monsoon season, our camp was only a few feet above river level, and we were already walled in. Needless to say we all voiced our appreciation for a nice clear night as we went to bed with our fingers crossed that both the weather and downstream section would be gracious to our expedition.