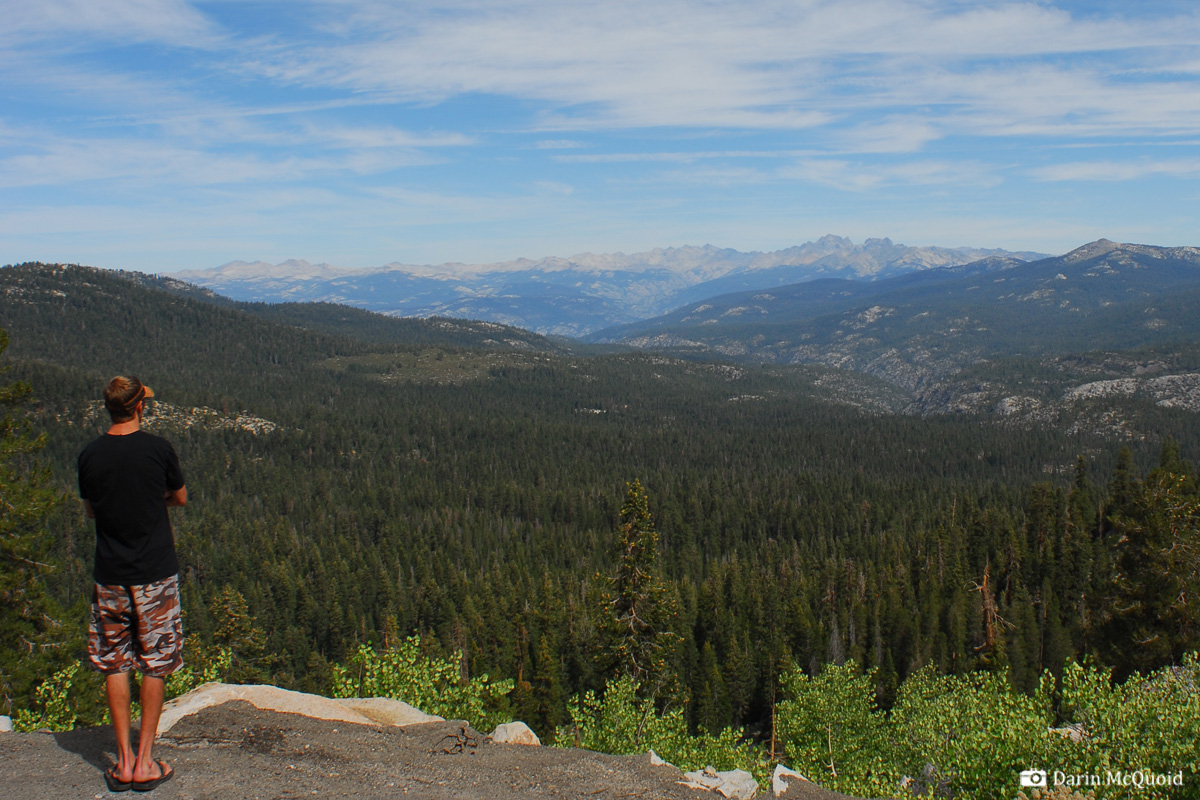 The South Fork San Joaquin runs freely to Florence Lake, but once impounded in Florence Lake it’s considered the “Hardest Working Water in the World”. Encompassing eight lakes, five forebays, nine powerhouses and three tunnels, Big Creek Hydroelectric Project is the largest in California. Construction began in 1912 and the last powerhouse at Balsam Meadow, built in 1987, is 1,000 feet underground and carved from solid granite. With such a massive project using all the water, it’s no surprise the river escaped descent for so many years.

There are several gauges on the river, but Southern California Edison withholds all information from the public. Both times I had paddled the Middle Fork San Joaquin, the South Fork was already at fish flows. How to run a river with no water?

"In the 24 years that have passed since Royal Robbins, Doug Tompkins, Newsome Holms, and Reg Lake's landmark first descent of the Middle San Joaquin, its sibling river the South Fork has been in the collective conscious of California's whitewater expedition elite. To further fuel the speculation over this run, it's upper reaches were included in the Holbek/Stanley guide as a spectacular run that only gets "harder and more fun" the further you go down stream to a point where either a Heli flight out or a massive hike out is necessary.” – Ben Stookesberry

Late in August 2008, American Whitewater volunteer Paul Martzen caught wind of water being released into the South Fork San Joaquin via Mono Creek. For reasons we weren’t sure of, they needed to move more water downstream than could be put through the powerhouses, and would be releasing 500cfs into Mono Creek, an un-run tributary of the river.

The release would be on Labor Day weekend, with flows “expected but not guaranteed”. Once I heard the news I called Ben Stookesberry, leaving vague message about the release. The message was forgotten as we planned to enjoy the Fordyce release that would happen at the same time and was a sure thing.


The San Joaquin drainage, where flows are never a sure thing. 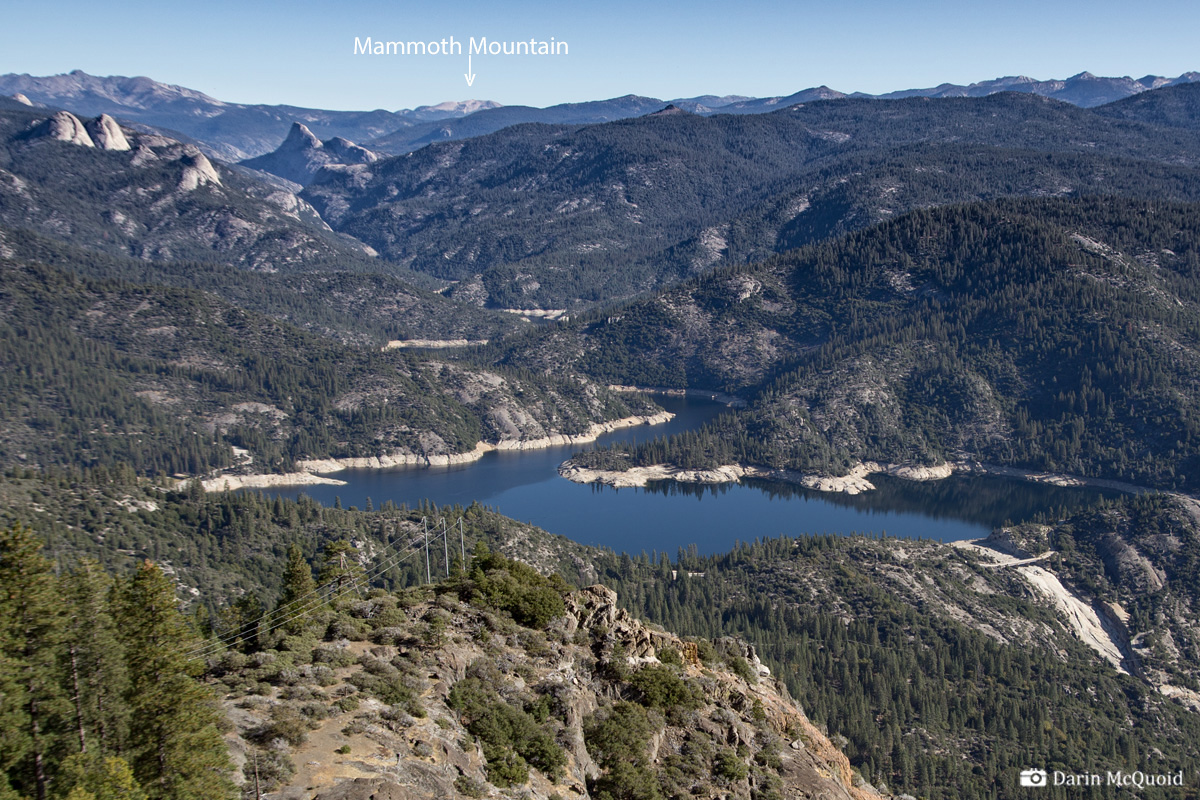 Mammoth resident Kevin Smith had the run on his radar too, and on Wednesday we chatted about the possibility of it, but I said we were out because I hadn’t heard from anyone and we all had work on Friday. While hiking into the beautiful Heart Lake outside of Mt Shasta, I was suddenly talking to Ben again, who was dropping lines like “once in a lifetime” and “this is what we do”. Fueled by his motivation I called one of my favorite kayaking partners,Matt Thomas, who said he could get the day off work and was in too. I followed that up with a quick call to Kevin confirming that it was a go and there would “probably” be water for four days.

Matt was planning on Fordyce and would have to drive home and pack his gear before heading down from Southern Oregon. This put our eventual departure time at nine pm, a late start for such a long drive. Knowing it was going to be a slog, we piled into Ben’s Subaru and drove all night, stopping for two hours of sleep at four in the morning.

As we pulled into the Mammoth Pool boat ramp at seven in the morning, we were all relived to see that Kevin had made the big night drive and was there on time. With no time to waste we piled into one car and embarked on the four hour shuttle.


Wilderness runs require wilderness permits, so we made a quick stop to get our permit and a better topo at the ranger station. 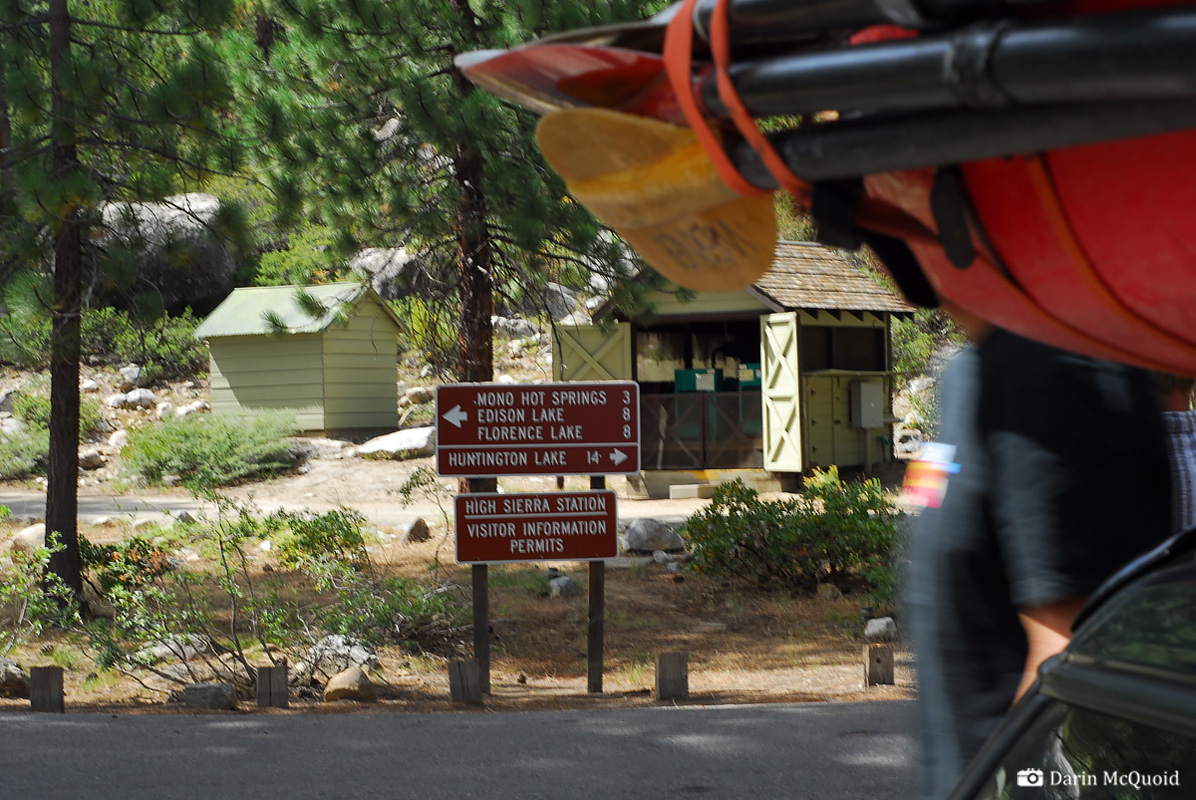 Several miles and no wrong turns later, thanks to map master Kevin Smith, we are at the put-in for Mono Creek. 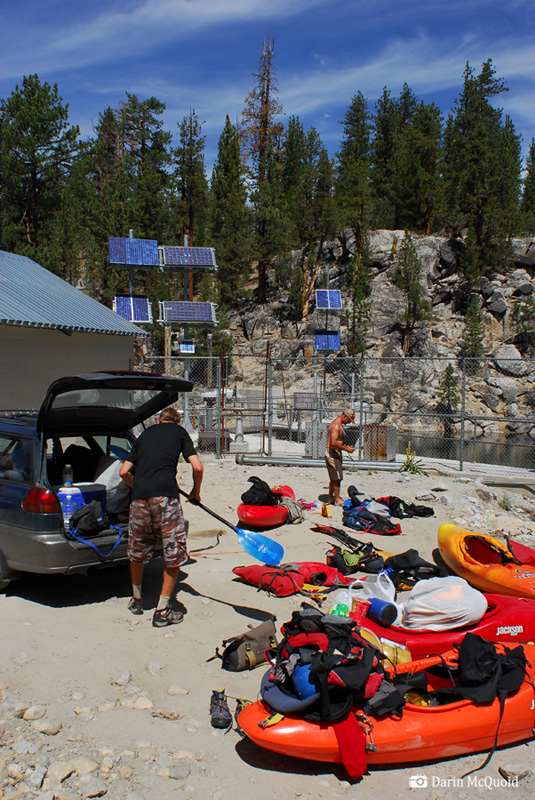 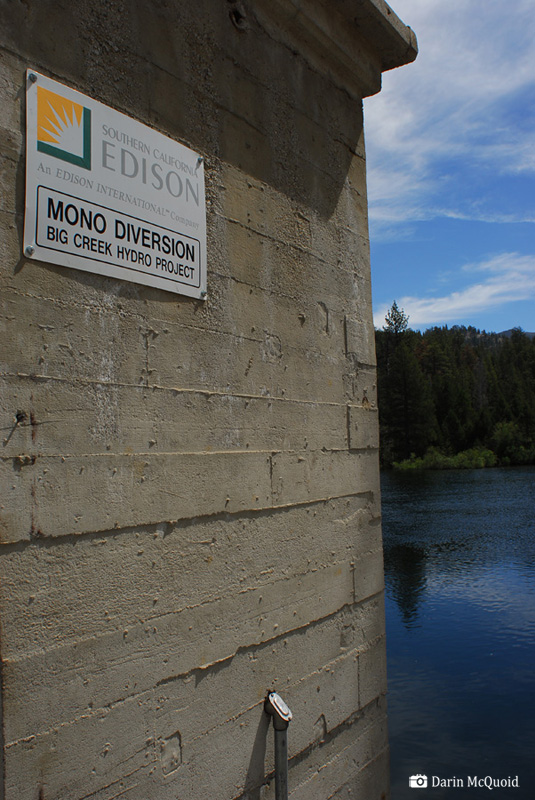 Mono Creek is a small tributary, and with 500cfs it was swollen past the banks. From the maps we knew that in the first half mile the creek would drop away at four hundred feet per mile. We planned for one big portage until we were far enough down to switch to the right side and find the trail. Plan on three days, but pack for four was our motto. Most of my provisions were either left over from the spring or bought at a gas station the night before.


Trying not to forget anything after two months off the water and two hours of sleep!

Initially a closed road on the left follows Mono Creek, but after several hundred yards it continues to hold elevation and veers away from the creek, which is already out of sight. Ready to see some water, we drop straight down to the creek.

It iss still steep, too steep for the high water level. We put in, ran one rapid and start scrambling into the available eddies, because the river doesn't stop and has lots of wood. We make one fast portage and it lookes possible to run a little ways and catch an eddy far downstream on the right. Then we will hopefully find the trail and keep hiking. 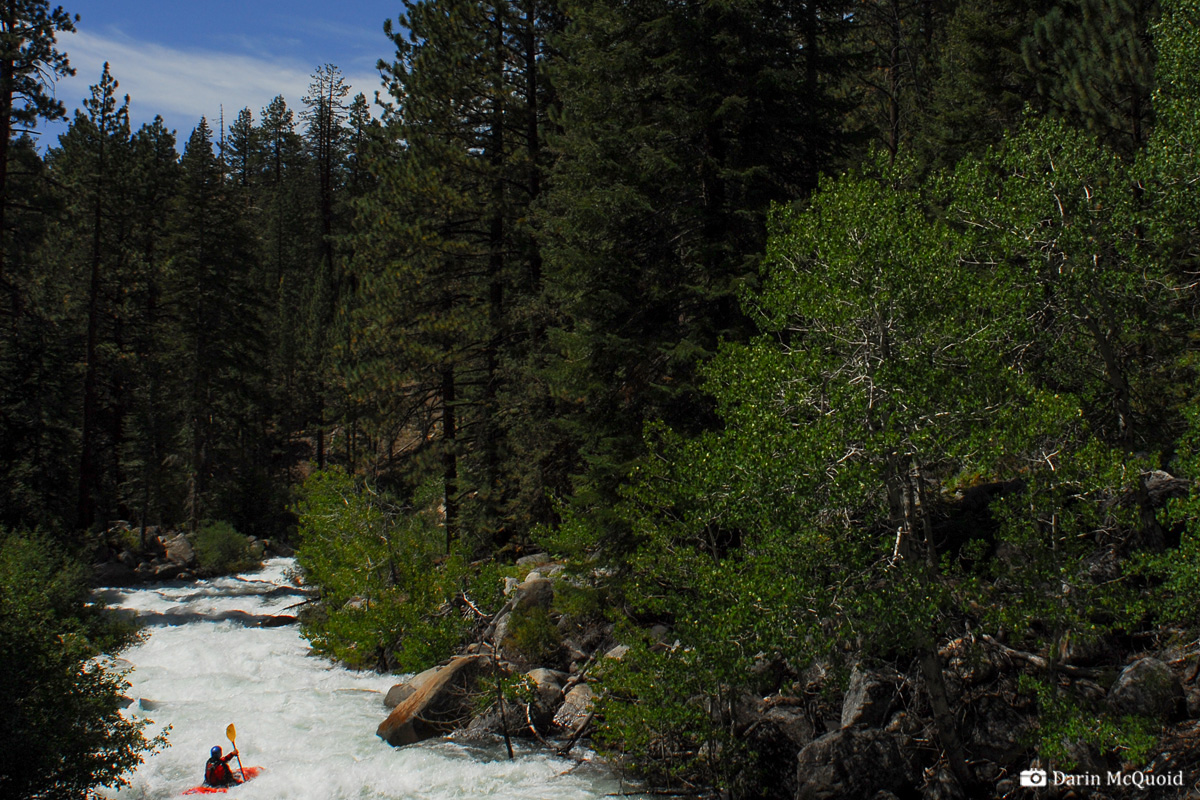 From far above it looked like Ben was right on line for the eddy, but as he made the final move, a hidden hole type-writers him to the left side of the river, and far, far away from the destined eddy. As he disappears around the corner we try to rush down the banks, but the rugged terrain makes rushing impossible. Instead we climb up to get a higher vantage point, and see Ben on shore with his boat and ok, thankfully he found an eddy above more log jams. We spend a few minutes debating our options, but it is obvious the only safe thing to do was go up and around.


Matt Thomas and the author going over and around. 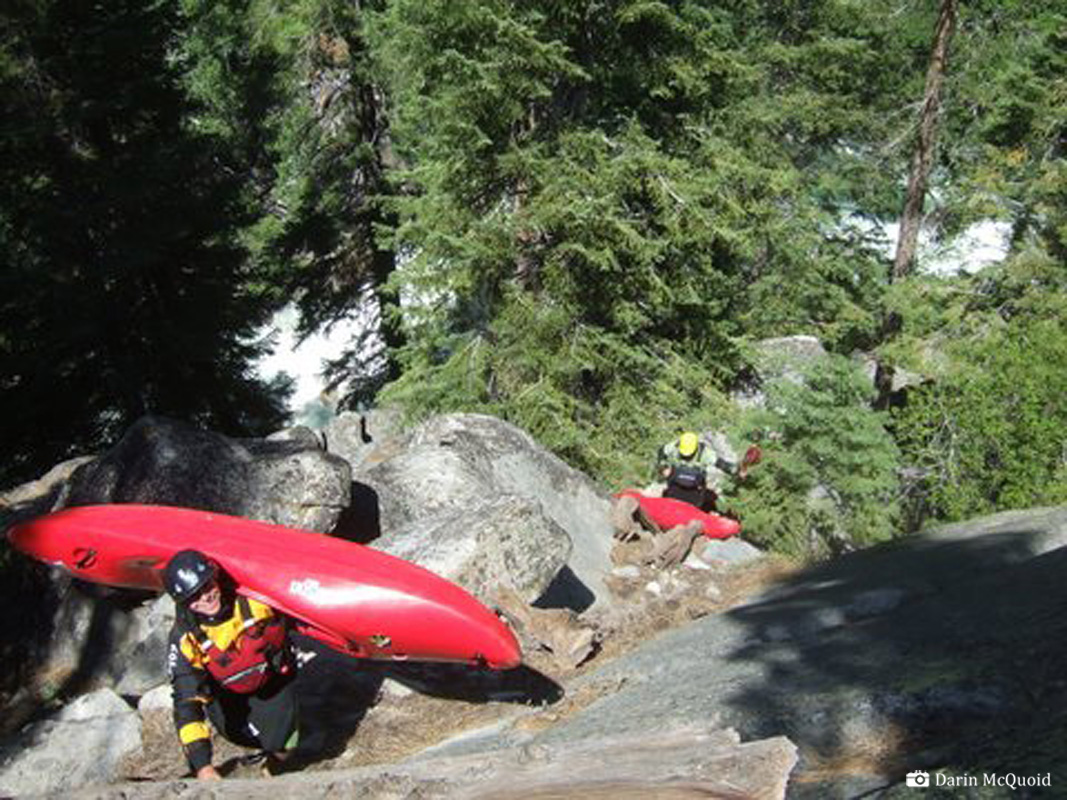 Every time we look at the river, the lack of eddies and abundance of wood keeps us high on the ridgeline, until the ridge eventually drops to the river near a cabin and footbridge. There were still a few portages around boulder piles, but we made quick work down most of the creek that Ben said was “a mini North Fork Payette”. 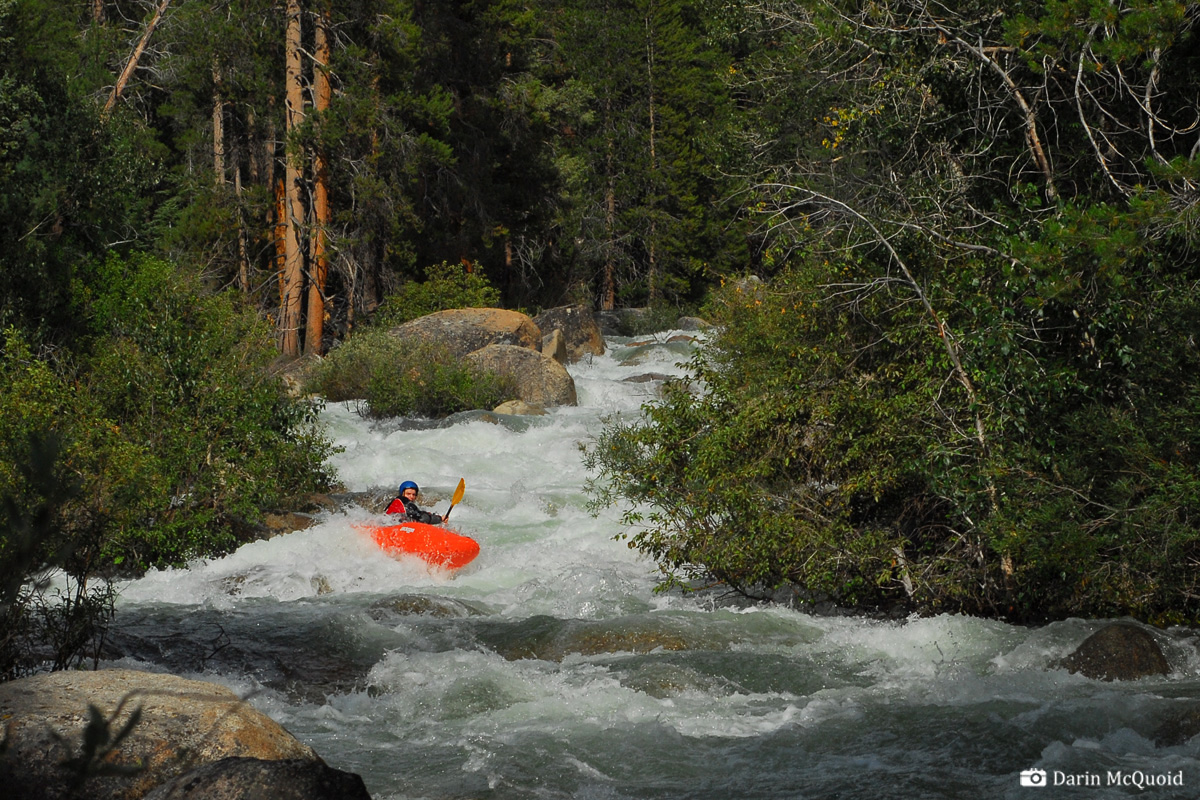 Once at the confluence our attention is focused on assessing the flow. The guidebook recommends 1,200cfs for the section above this, and 500cfs is far cry from that, but the river holds the water well and we make quick work of the fun rapids, until after a few quick miles and one or two portages we pull to setup camp on the right. 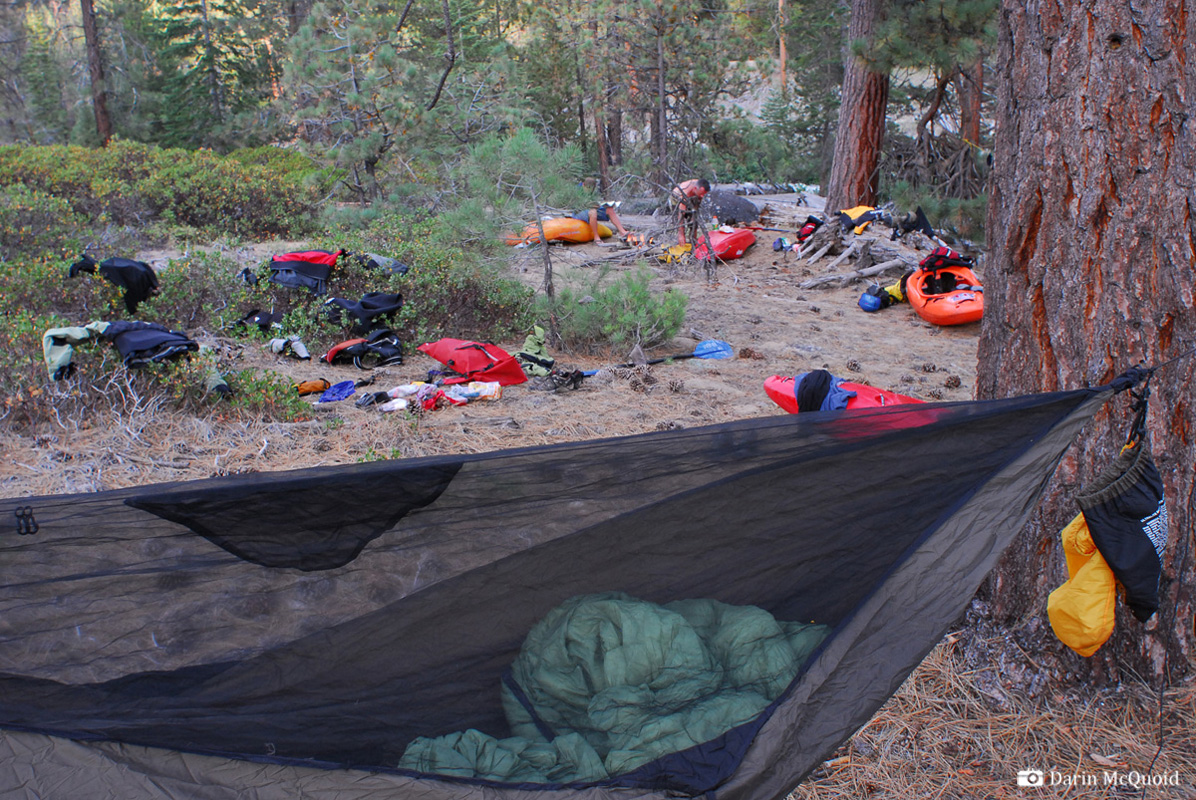 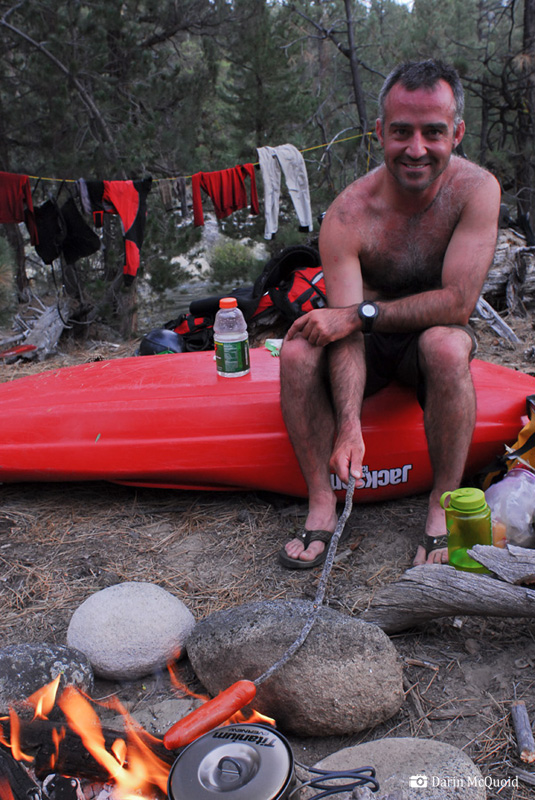 Over the fire we discuss mileage we had made, and although we wished there was more more behind us, we've done well for putting in at 1pm and finding Mono Creek more demanding than expected. From camp it was obvious the next day will be full of action, and we depart for our sleeping bags to catch up on sleep.