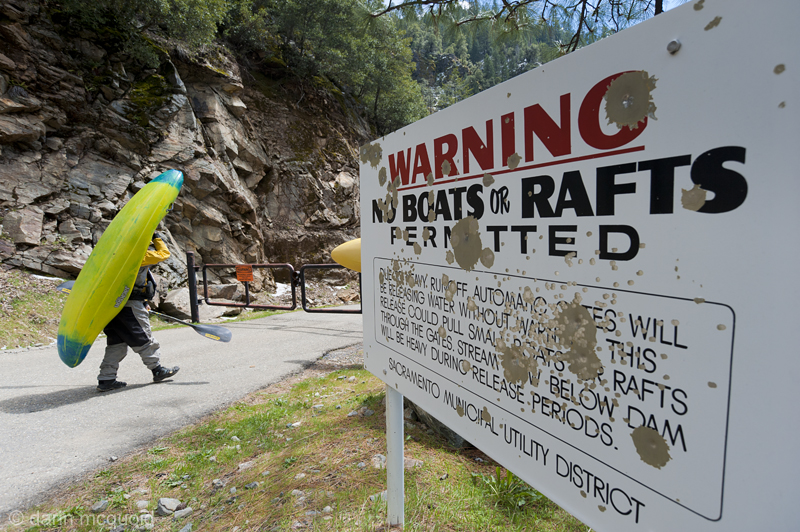 It may be the Golden State, but California has no shortage of Silver named bodies of water. South Silver, Silver Fork of the American, and Silver Creek to name a few. This is Silver Creek, which flows from Camino Reservoir into the Golden Gate run of the South Fork American. The Best Whitewater gives it just a few lines, mentioning fun IV-V, eight portages and a lack of reliable flows. It often will not have water for a decade, and to compound the rare flows of Silver Creek, the lack of an online gauge coupled with an inability to see the creek at the confluence make it very hard to get on.

Thanks to Hilde, who has put in a ton of work with SMUD and the SFA, we got word of water in Silver Creek and jumped at the opportunity to get on this rare gem. Thanks to Hilde for sharing the info and to Jason Lynn for sharing images. Camino Reservoir is quite a drive, over an hour and a half,  from the take out (which happens to be the same as Golden Gate). Thankfully it's all on paved and plowed roads, otherwise access would be blocked by snow. A gate at the reservoir necessitates a quick three quarter mile stroll to the dam and put-in.


There are also waterfalls all around the powerhouse at the top of the reservoir, giving the put-in an epic feel. 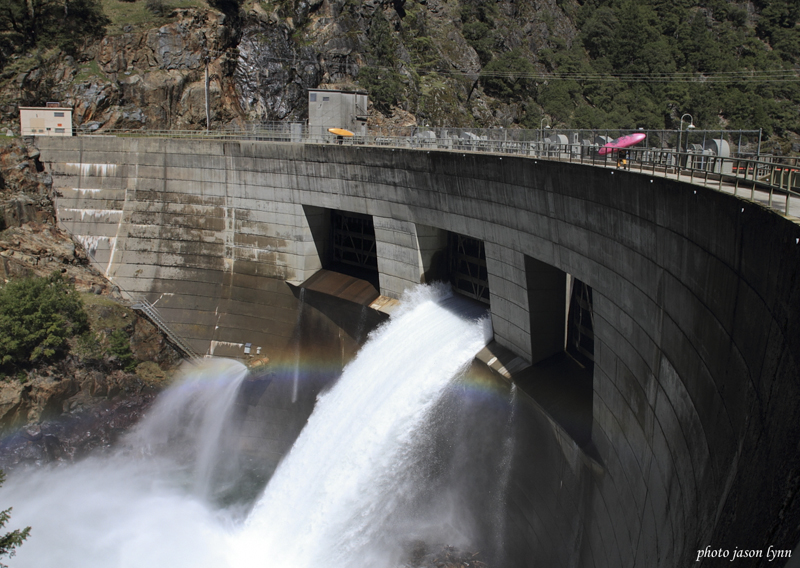 Looking downstream into the gorgeous canyon. To give a scale of size, those tiny little bright spots are kayakers at the put in on the right. 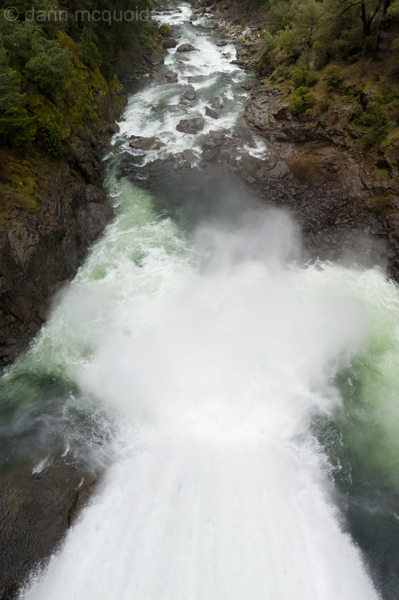 Silver Creek starts off with a nice bit of read and run class IV boulder garden around the first corner. Taylor Cavin puts in a little higher up. 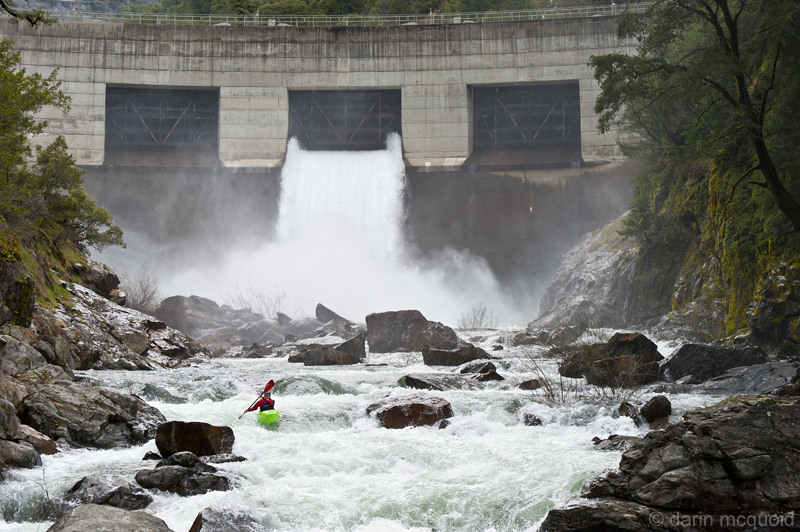 The read and run leads into the first scout of the run, the bottom half which is shown above Stephen Wright. 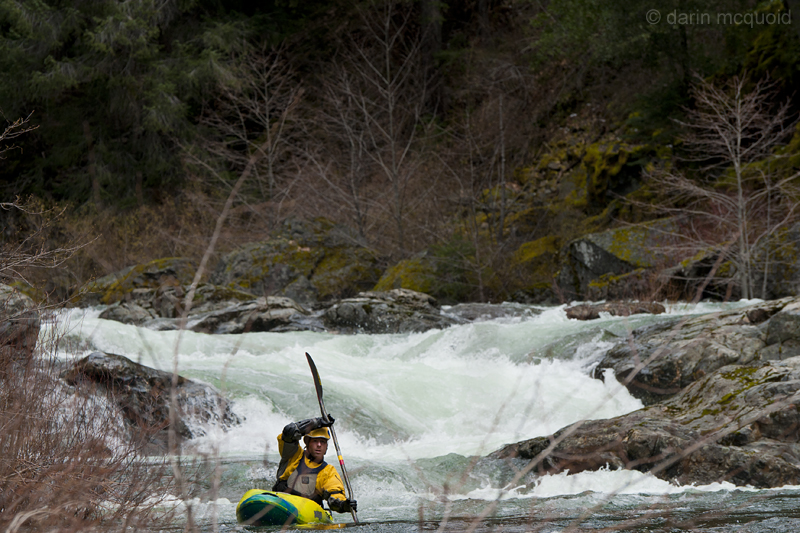 Next up is the first large drop that may be portaged by some. It looks like the scout is on the right, but you actually get a better view and portage route on the left. The eddy is in the pool where Stephen is pictured above.


Stephen Wright runs the first and one of the largest rapids of the run. 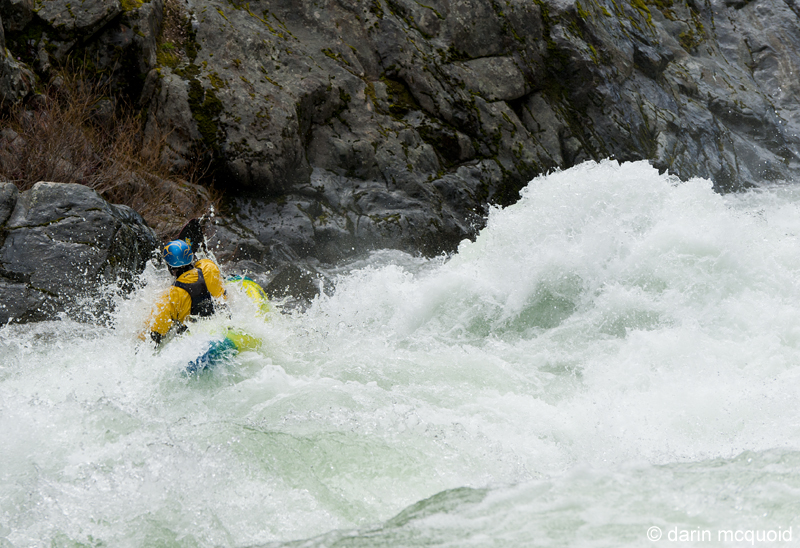 A zoomed out view of the author running the same. 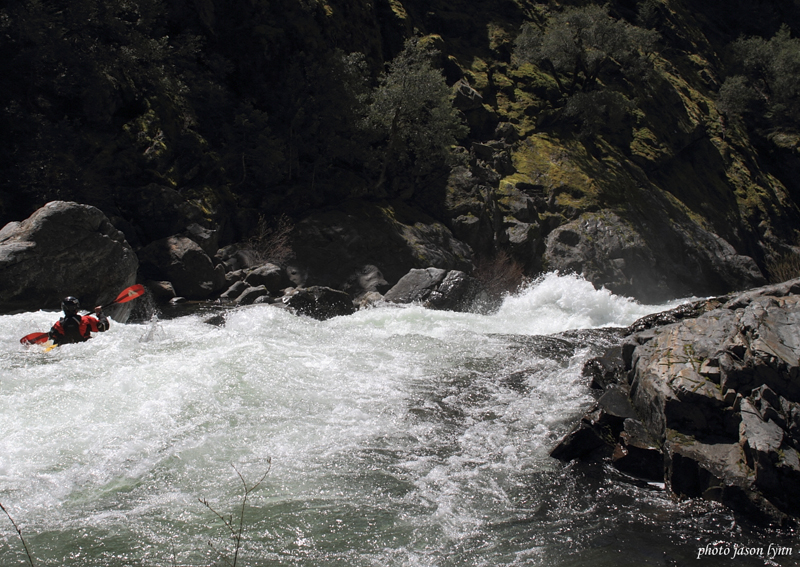 Silver Creek continues at a rapid pace with many class IV drops, feeling considerably steeper than the 100fpm average gradient would have you believe. Mixed in a few nice boofs before another long rapid. 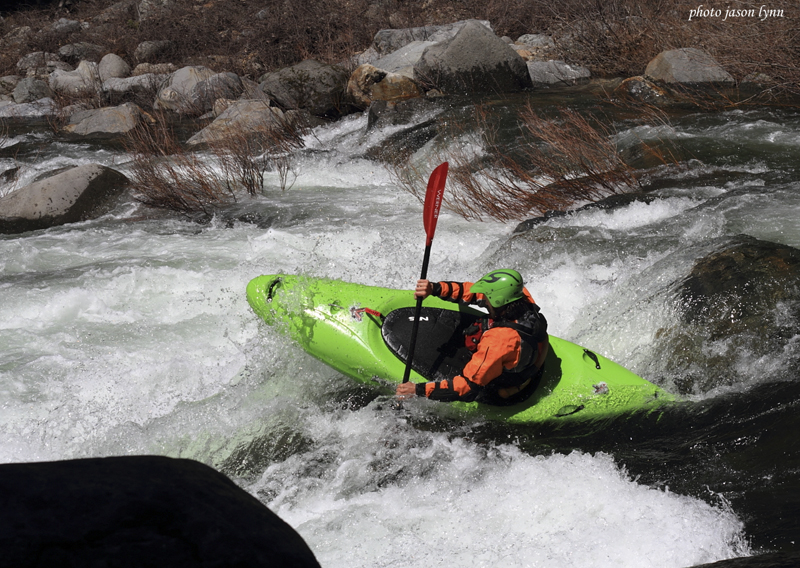 Silver Creek has an interesting character. The rapids look long and intimidating from above, but nearly all of them are good read and run once committed to.


A dreaded from the boat shot does this long rapid no justice. 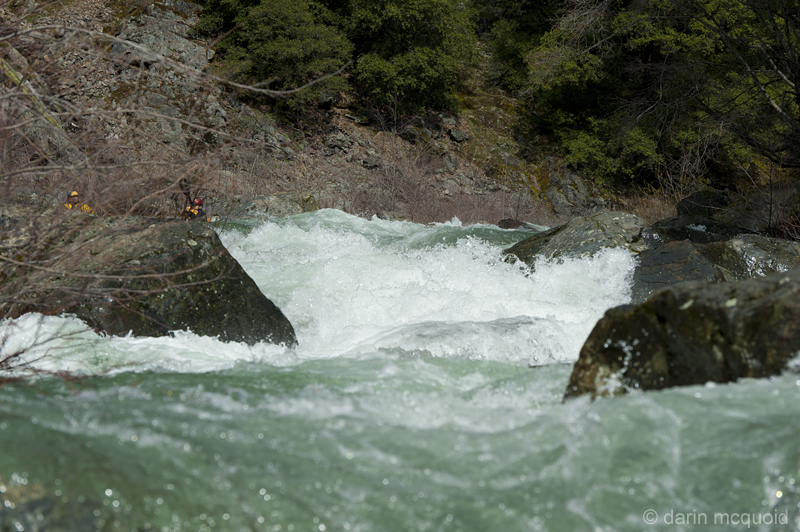 We cruised through countless fun rapids before the river flowed into a beautiful gorge, make a sharp left turn and tumbled into what at some flows could be the only mandatory portage of the run. It would be a fantastic rapid, except the left wall is severely undercut and there is a nice big stomping hole dubbed the "Fondue Pot" 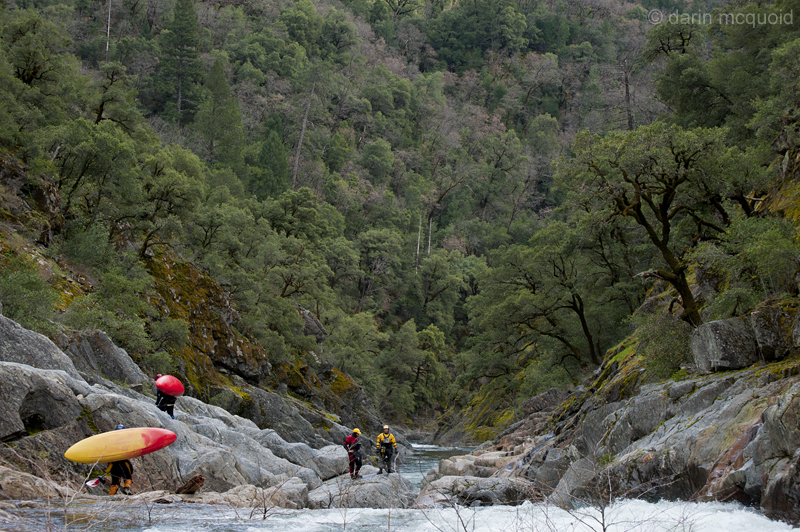 Beautiful scenery through and through the canyon. 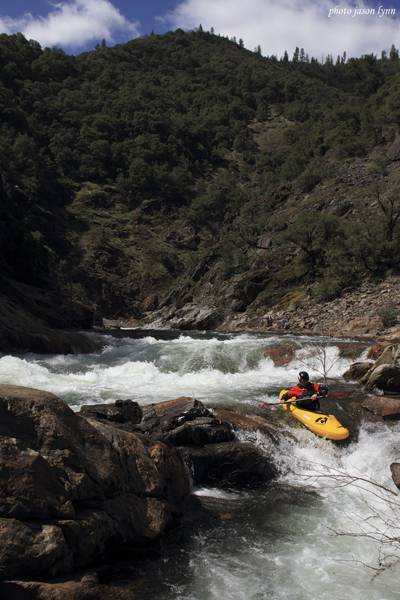 At our flow Stephen Wright found a good sneak down the left line. I don't think this would go at all flows, but it did at ours. The author runs the said sneak. 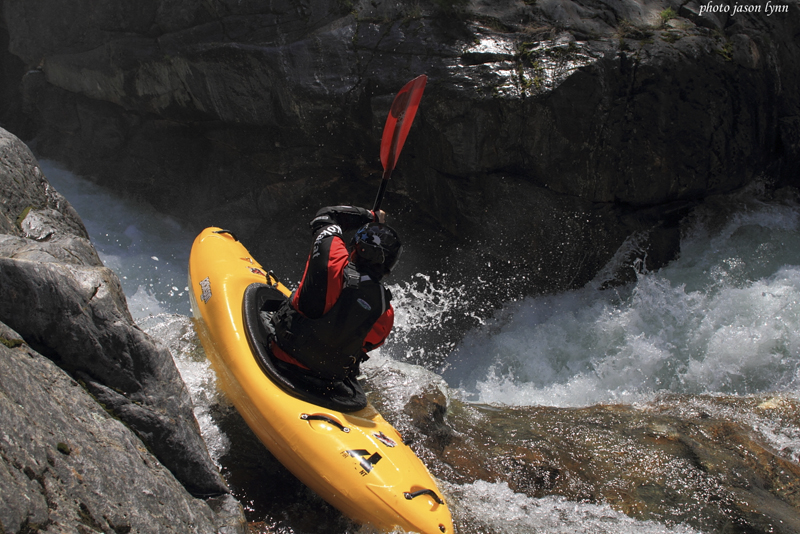 On our second day we lunched at the potential portage. It seems to be a nice halfway point through Silver Creek. Downstream the pace picks up with a lot of fun rapids that once again look intimidating, but are just splashy III-IV for the most part, with the occasional larger drop thrown in.

One of the more demanding sections of river is the lead in to the Lobster Pot and the pot itself. The lead in has some nice holes to dodge and quickly pushes into the rapid if you aren't on your toes. The Lobster Pot is a beautiful boiling mess, not as bad as it looks but it managed to flip about 50% of the adventurers. There is also a sneak down the far left for those not looking to get in hot water.


Taylor Cavin hops on in. 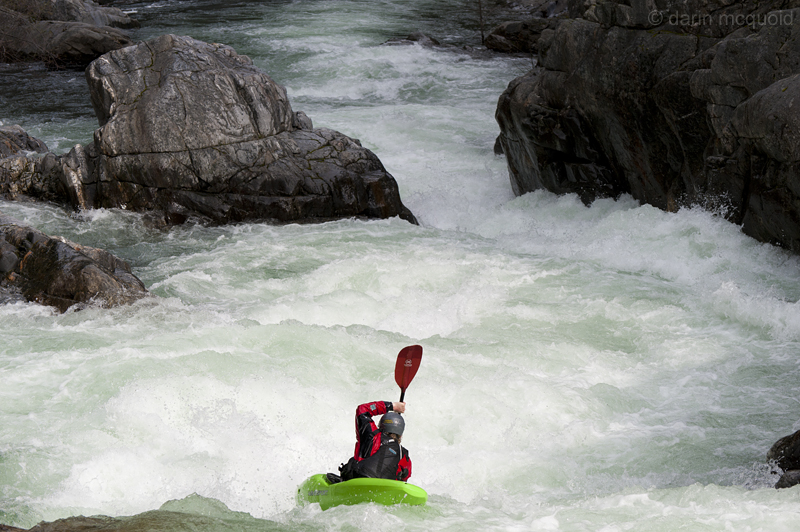 The key is avoiding the right wall after the first big boil. Chris Tulley finishes off the Lobster Pot. 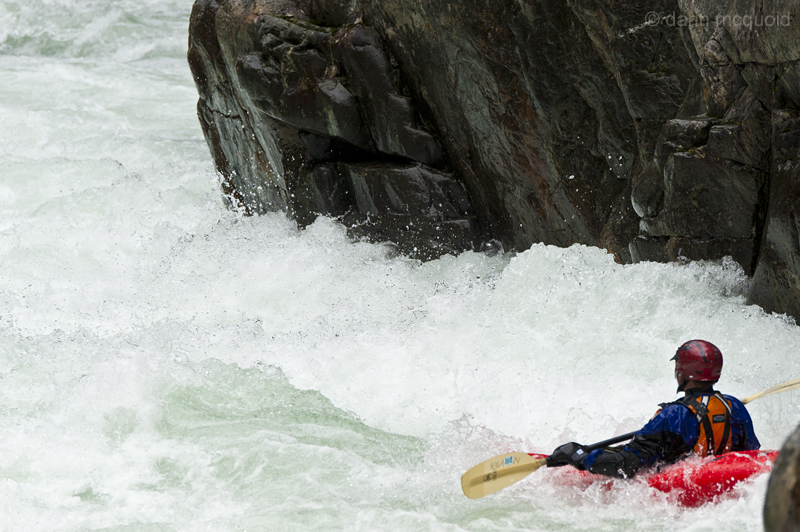 Once again the fun IV-V character resumes with lots of splashy rapids, cascading tributaries and fun boofs. Middy Tilghman is about to get one. 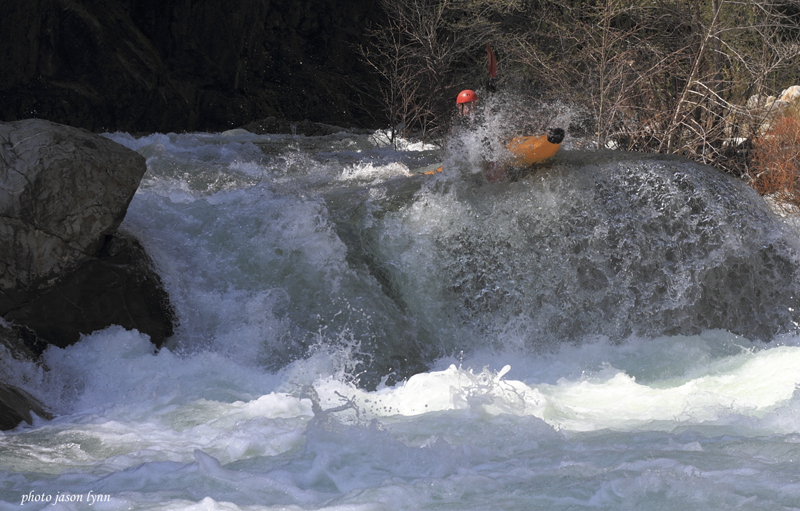 On and on the fantastic whitewater continues, big enough to be entertaining but not scary. Tera Muir enjoying a nice section. 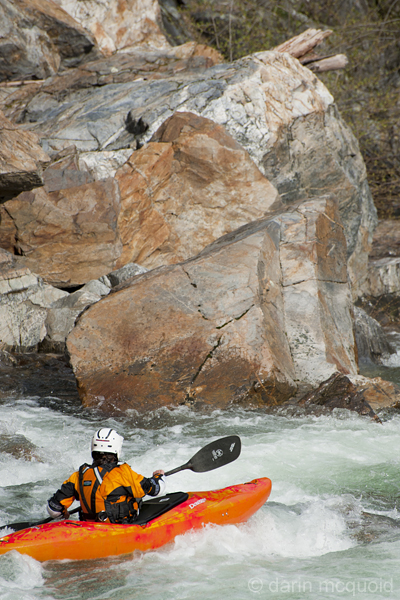 Eventually Silver Creek meets the South Fork American, for a final big water section down to take-out. I thought that this section was one of the highlights, there are massive wave trains and the occasional hole to dodge. Plus a quick optional portage around F111. Floating down to the finishing our whole grew expressed surprise at how good Silver Creek was. All thought it was one of, if not the best IV-V run in California. It's a long day with more than enough rapids, and with a few judicious portages none too terrifying. It certainly makes my list of classics. While most of the rapids are not as large as the ones on 49 to Bridgeport of the South Fork Yuba, it makes 49 to B look almost like flat water due to the intense quantity of whitewater.

It's a true shame this run rarely has water, as I have no doubt it would be one of the best resources in the state if it saw a whitewater release. Daniel's video of the run.

Take-out from Sacramento: Highway 50 East, Exit at Sly Creek/Pollock Pines. Turn left at bottom of offramp and make another left at the next stopsign. Just past the Safeway, turn right on Forebay road and following it 8 miles down to the river. On that road, you will go by a small lake and a cement road drops down to your left, stay right. Park downstream of the bridge.

Put-in: To reach put in, go back to highway 50 and head east. Follow it until it crosses the South Fork American River and make a left on Icehouse Road. Stay on Icehouse to the top of hill and make a left on Peavine Ridge Road. Stay left on Round Tent Canyon Road (unsigned but paved) and continue as it turns into Jaybird Powerhouse road and follow to Camino Reservoir.


Stephen Wright stands on top of a proud load of eleven kayaks. 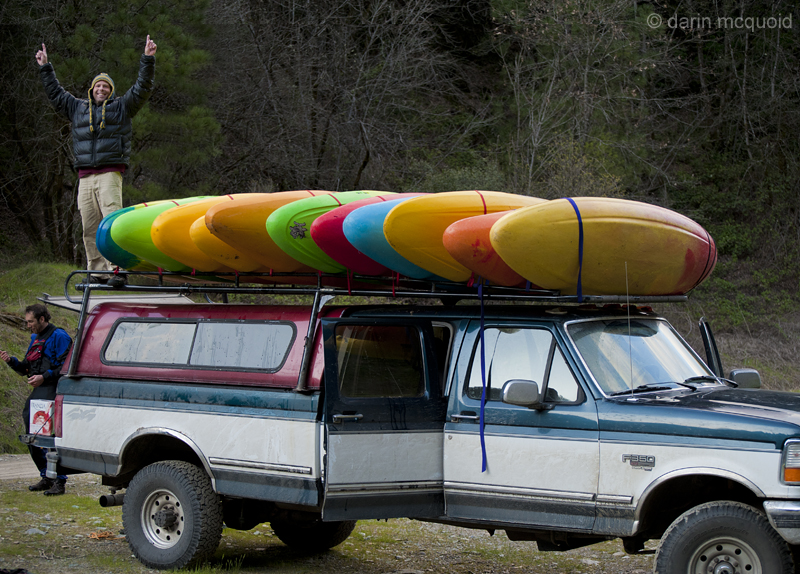 There used to be a gauge...just look how often it flows! 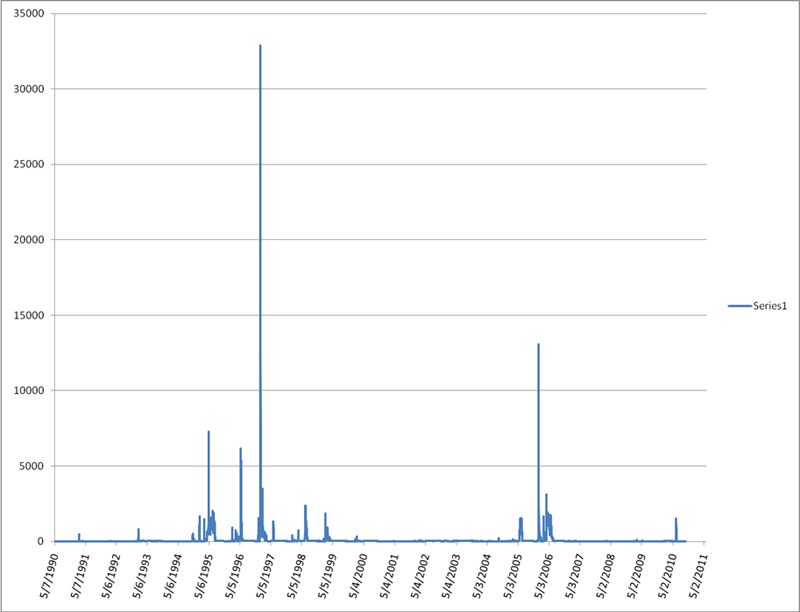