It's still full shade when we rise around 7:30 in the morning. A quick fire is made and as well as a repair to the leaking drysuit. We're on the water before nine and scouting not long after. Unusual for Thomes Creek, we scout and are able to run the rapid. Today's going to be different.


Luke Andraka runs one of the best rapids of Thomes. 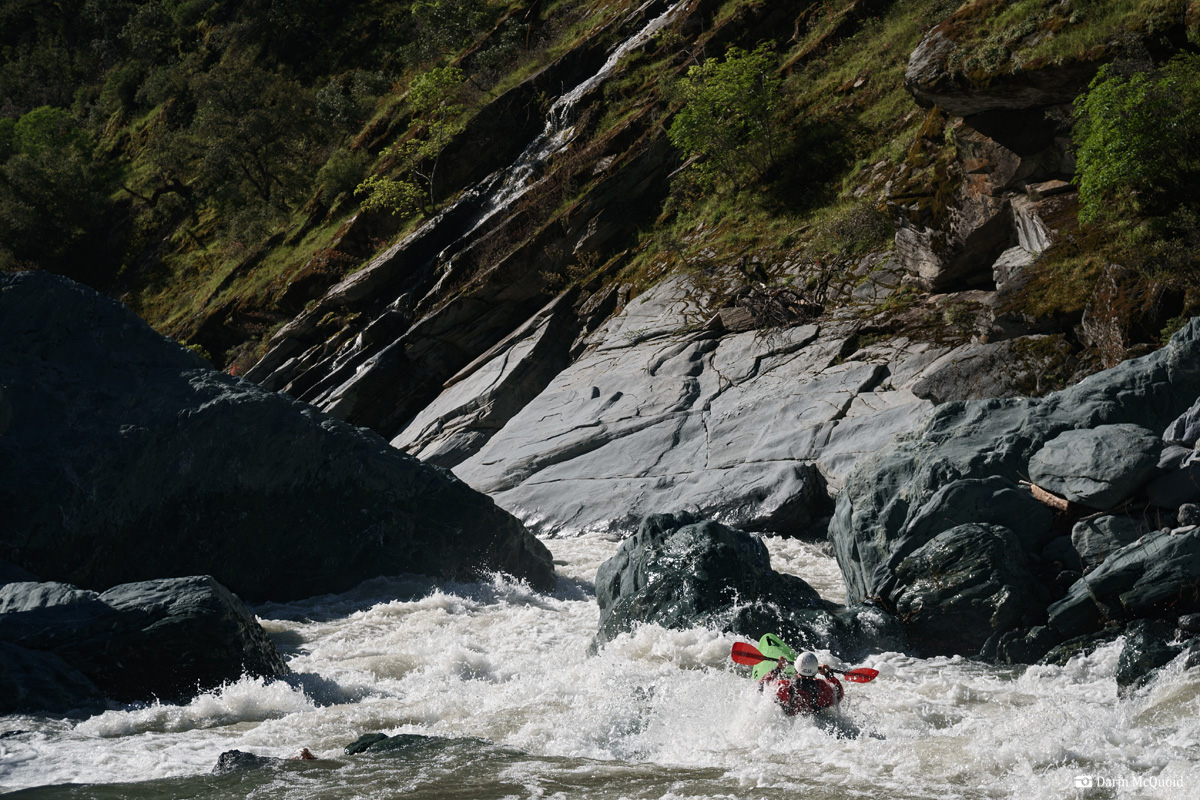 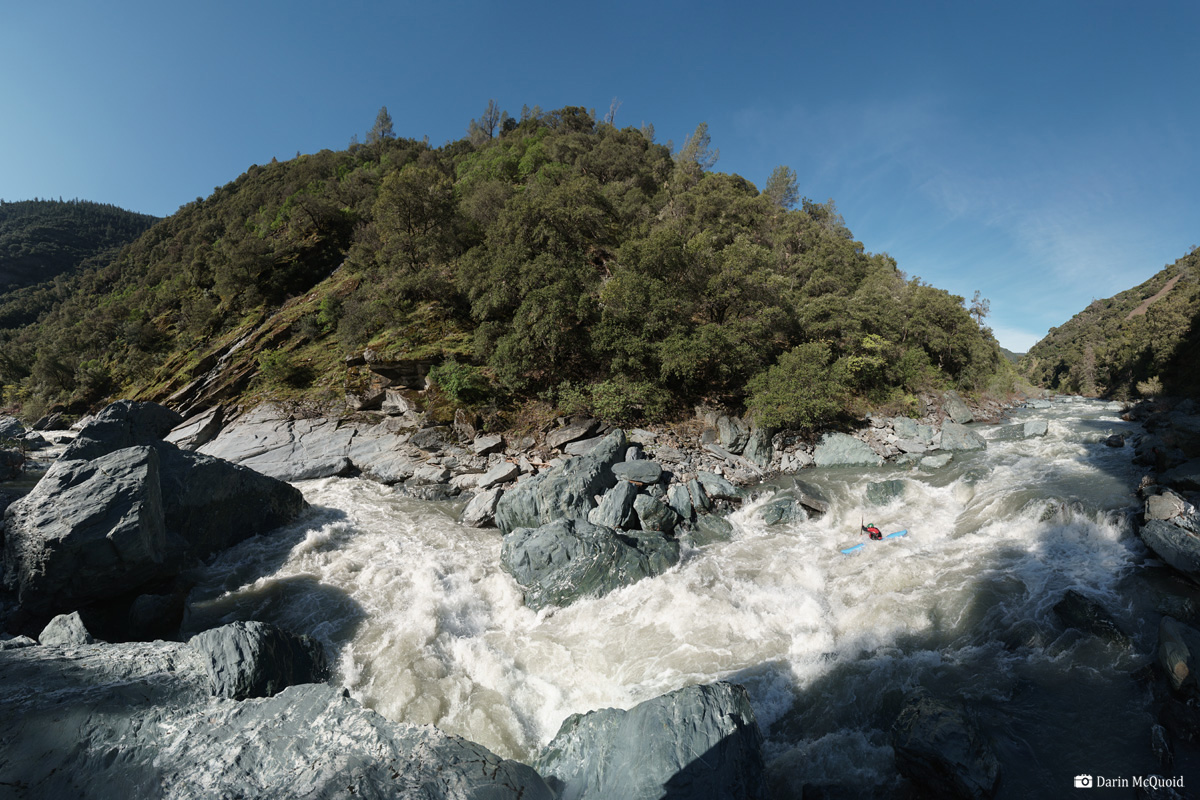 Fifteen minutes later and we're out scouting again. Maybe today won't be so different from yesterday, a nasty rock pile forces a painful portage down the right as we enter what maps mark as the "Devils Basin". 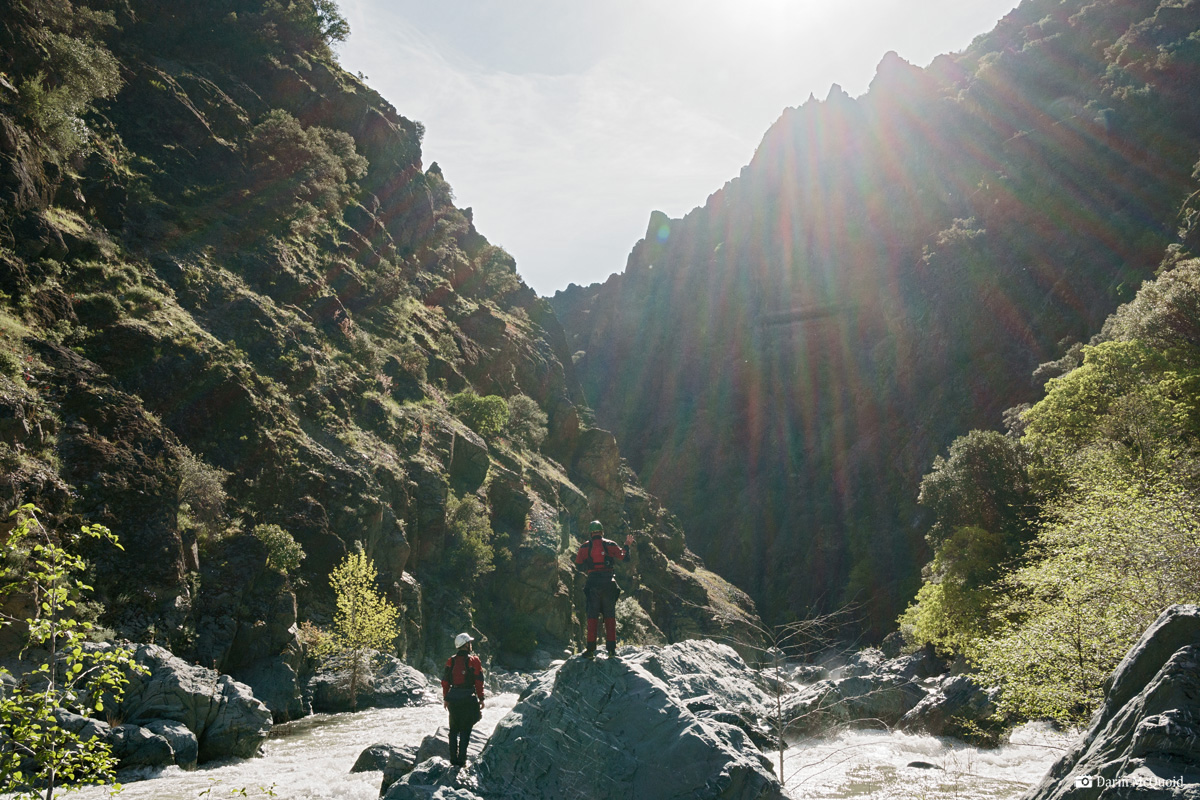 After wrapping up the portage we make good time through more read and run action, approaching what maps clearly indicate as a tight spot in the canyon. If we can just get through this, gradient will ease up and we'll be floating in the valley above the final gorge. When we approach the tight gorge portage options look slim. Daunting in fact, varying on impossible. Everything in the left channel is shallow. Maybe the right channel has a line. Maybe not. We hem and haw, Luke tries to get a good look at the rapid, and eventually is able to see the right side. It's good to paddle with rock climbers.

Blind horizon without a portage. 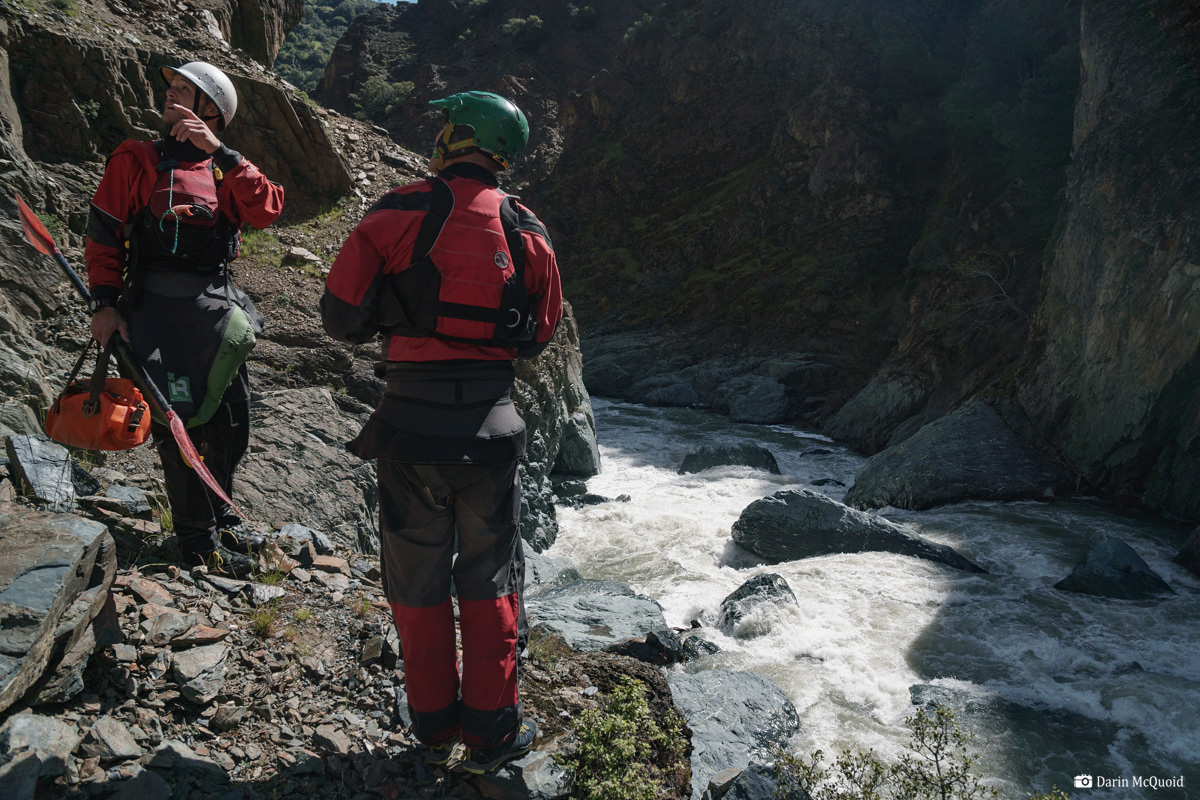 A sweet boof is hiding on the other side of the massive rock and we feel immense relief, Joseph Hatcher. 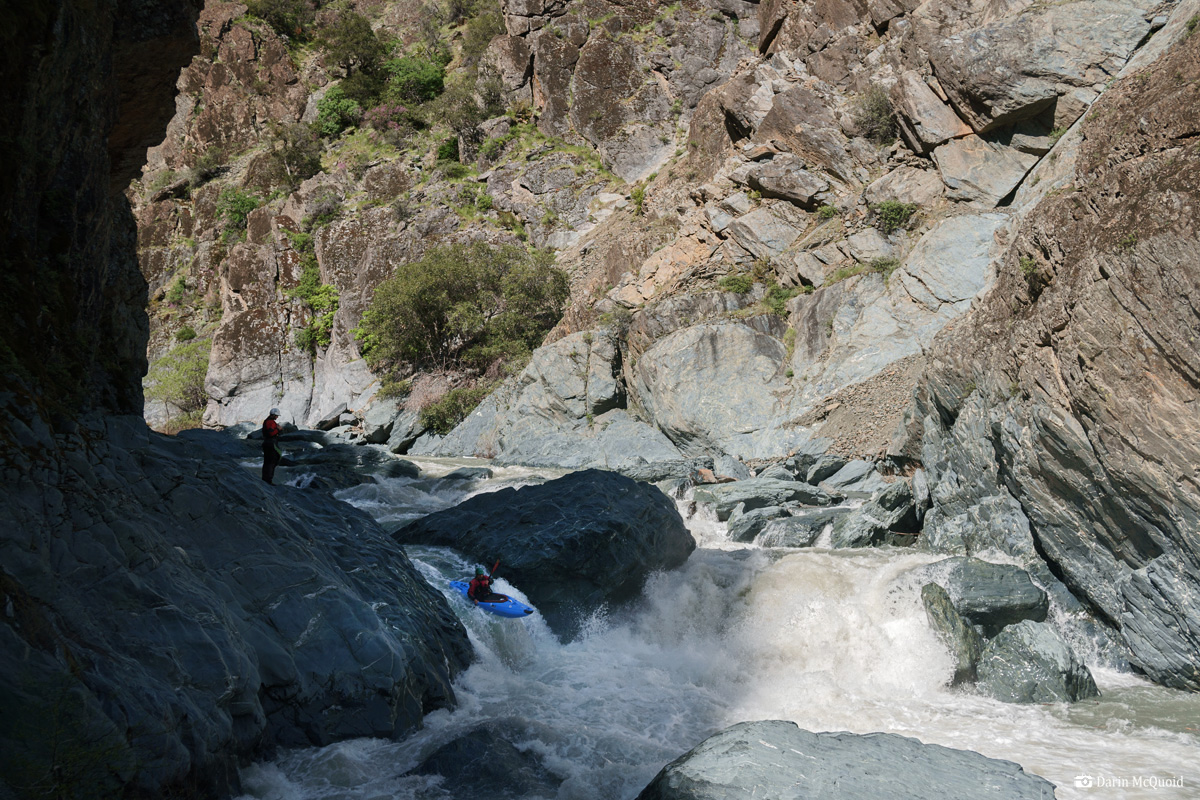 I hop out to take a photograph and scout the next horizon. It's a nice rapid and with any luck we'll paddle around the next bend into the upper valley. 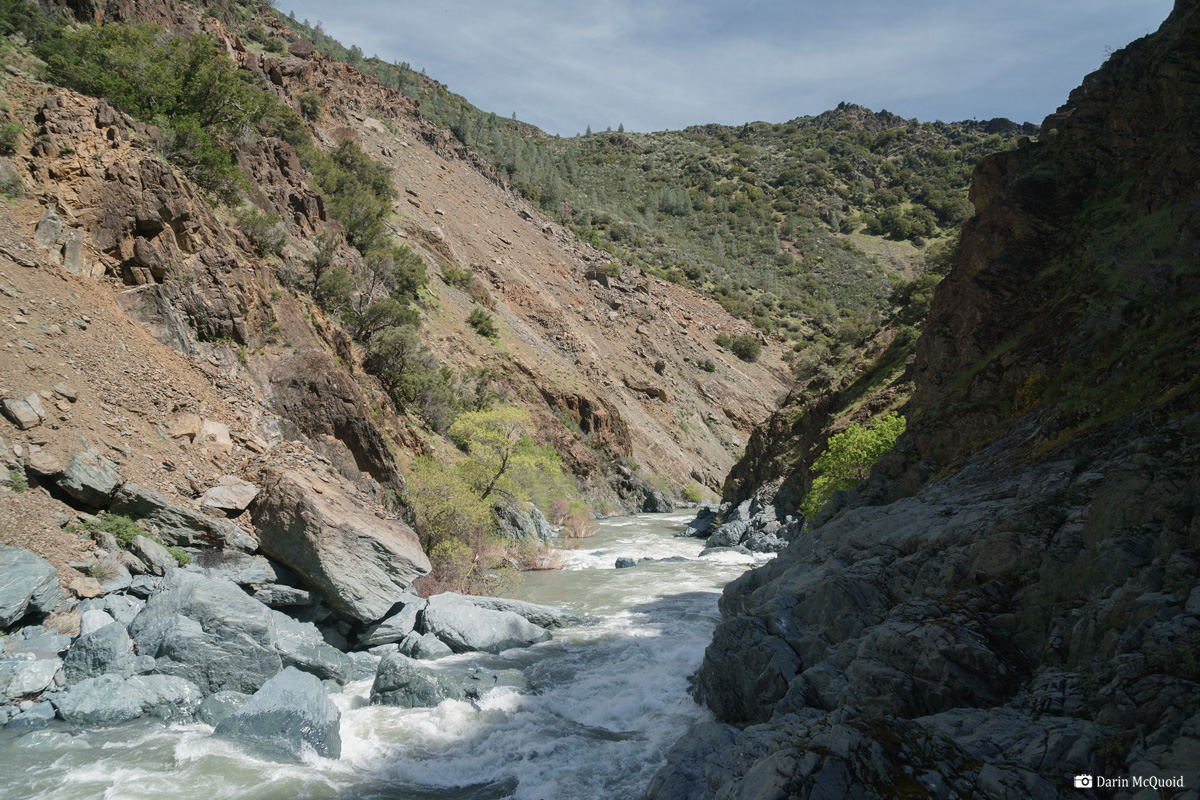 Looking upstream at the rapid pictured above, it's a good thing we didn't have to portage the one above it. 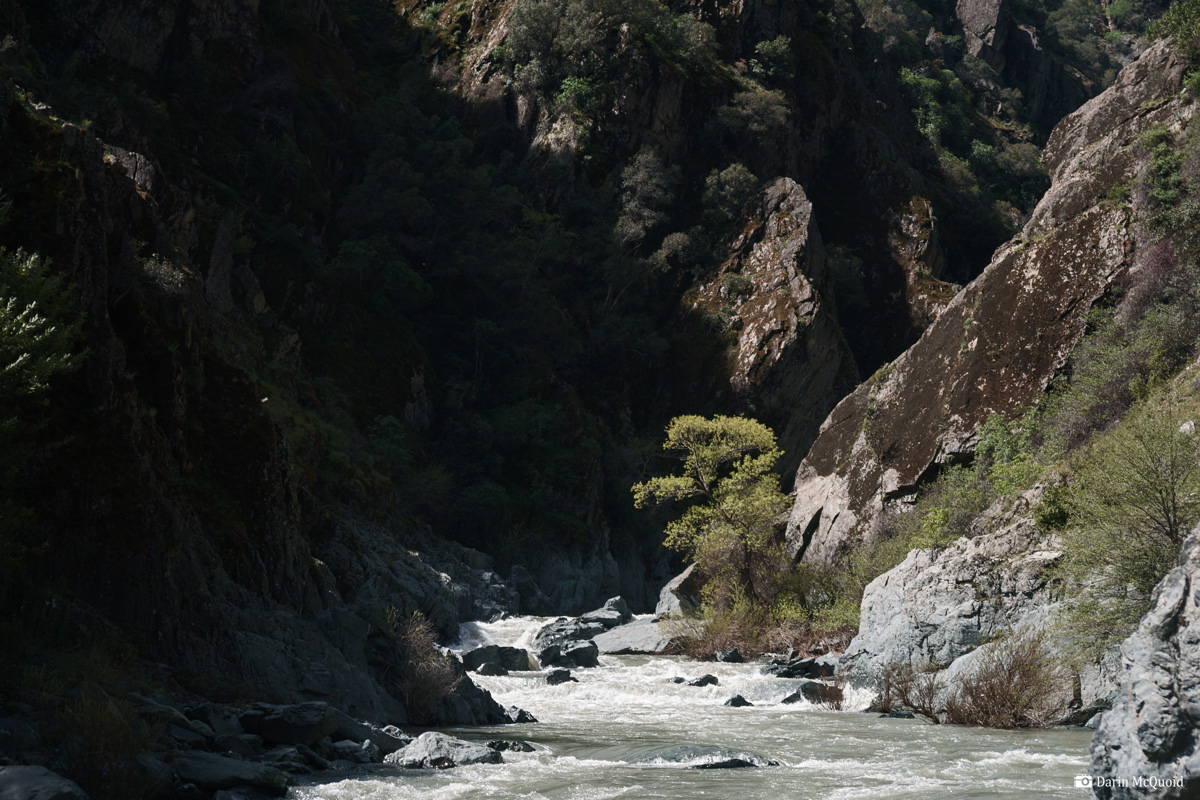 We round the corner there are no smiles. It's steep, blind and has the sieves of Thomes. 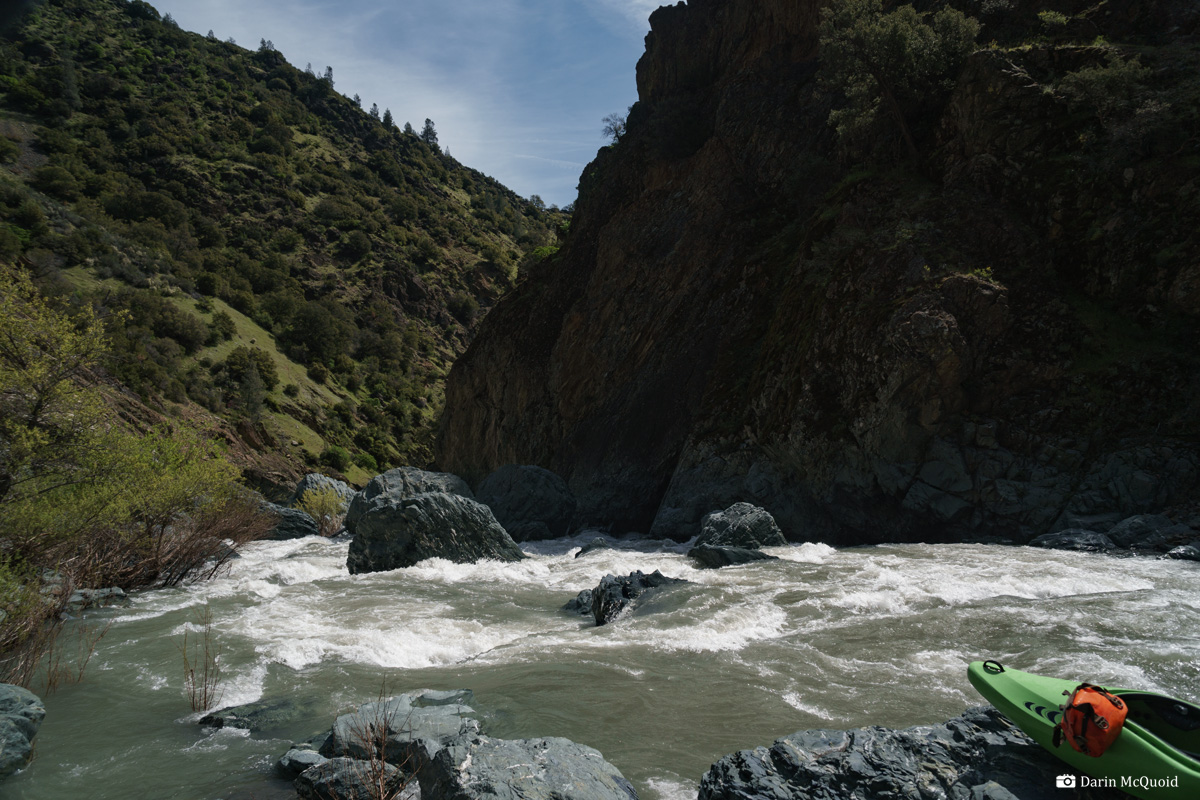 Luke Andraka and Joseph Hatcher scouting for a portage route as there is no option at river level. 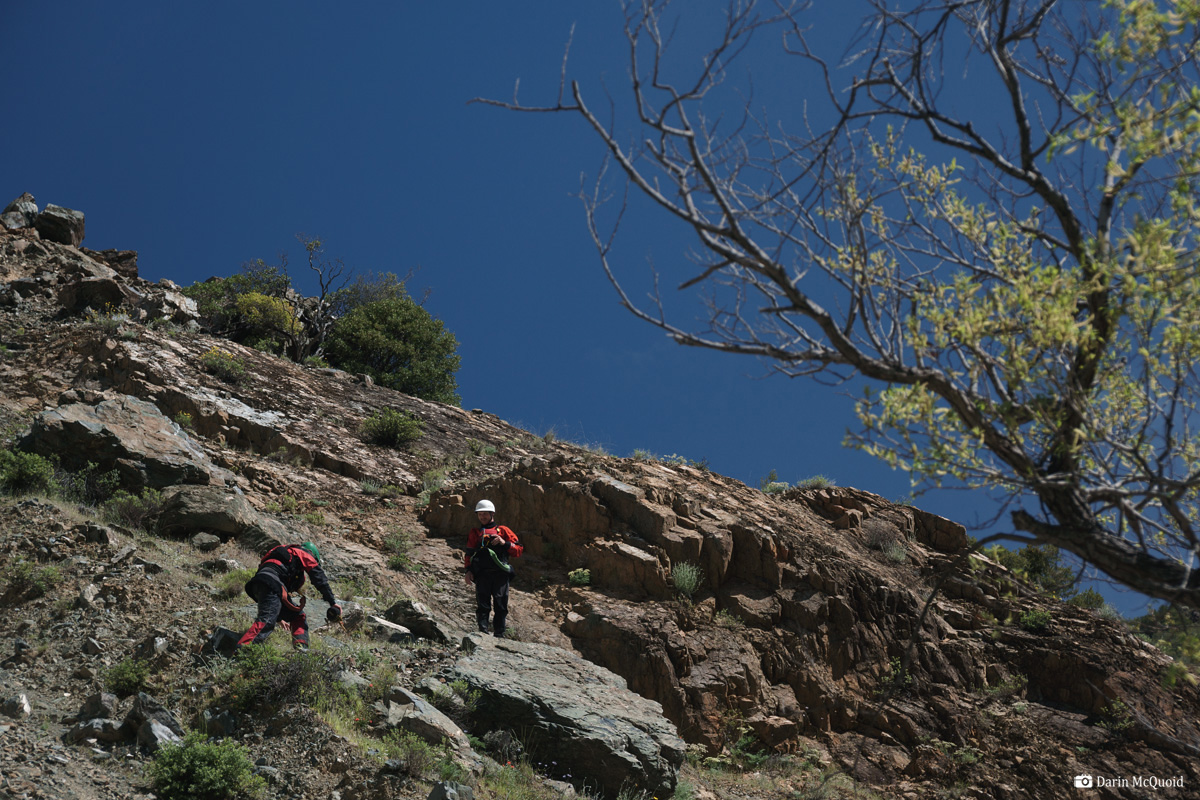 Luke and Joseph returning from the scout. You know it's not good when the portage scout takes forty minutes. 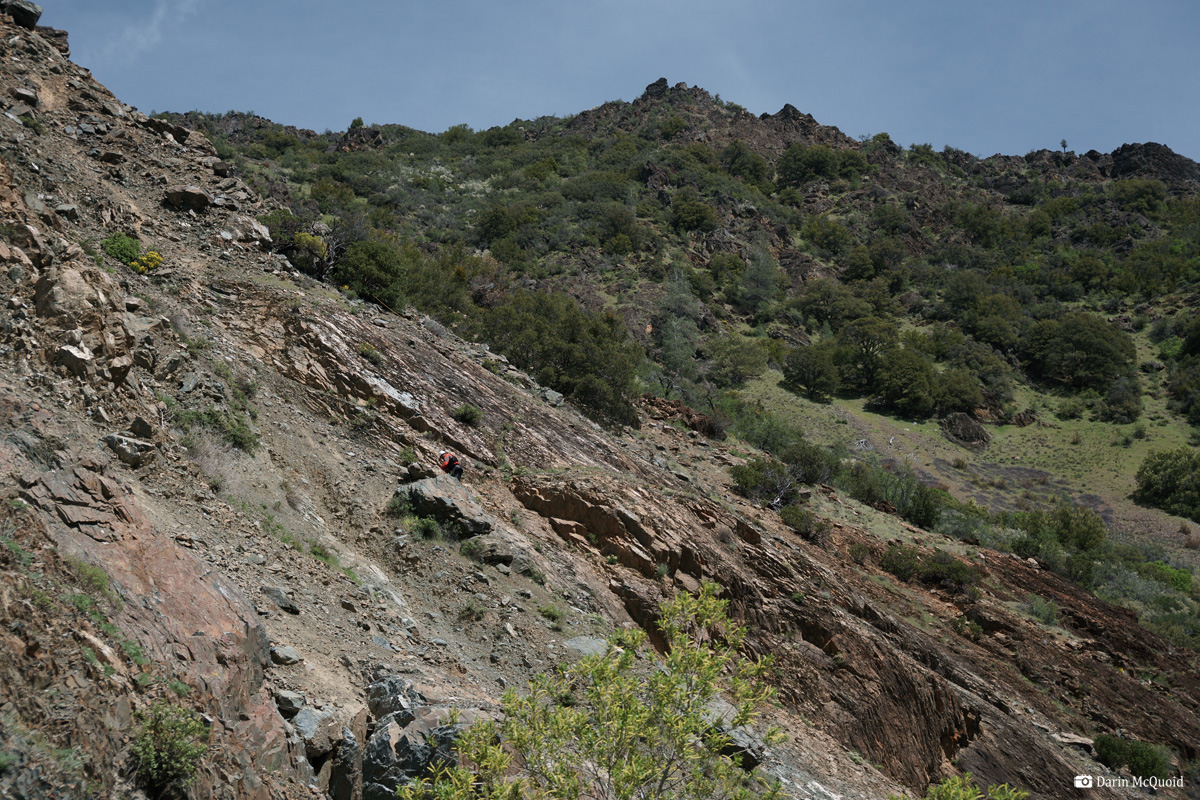 It will not be pretty. We'll have to rope our kayaks up the scree cliff field. It's loose as hell, and it'll be three pitches of two throw ropes, yet that is what it will take to get the boats a staging platform of any kind. Don't breathe on them wrong or they'll fall in the river. It takes us nearly two hours to get two hundred feet off the river. During the portage the rapid starts to look better and better. Maybe it would have been safer just to send into it and know the results of the choice in two minutes.


Kicking rocks down is one of the largest hazards and makes things painfully slow. Joseph Hatcher trying to not set off a landslide. 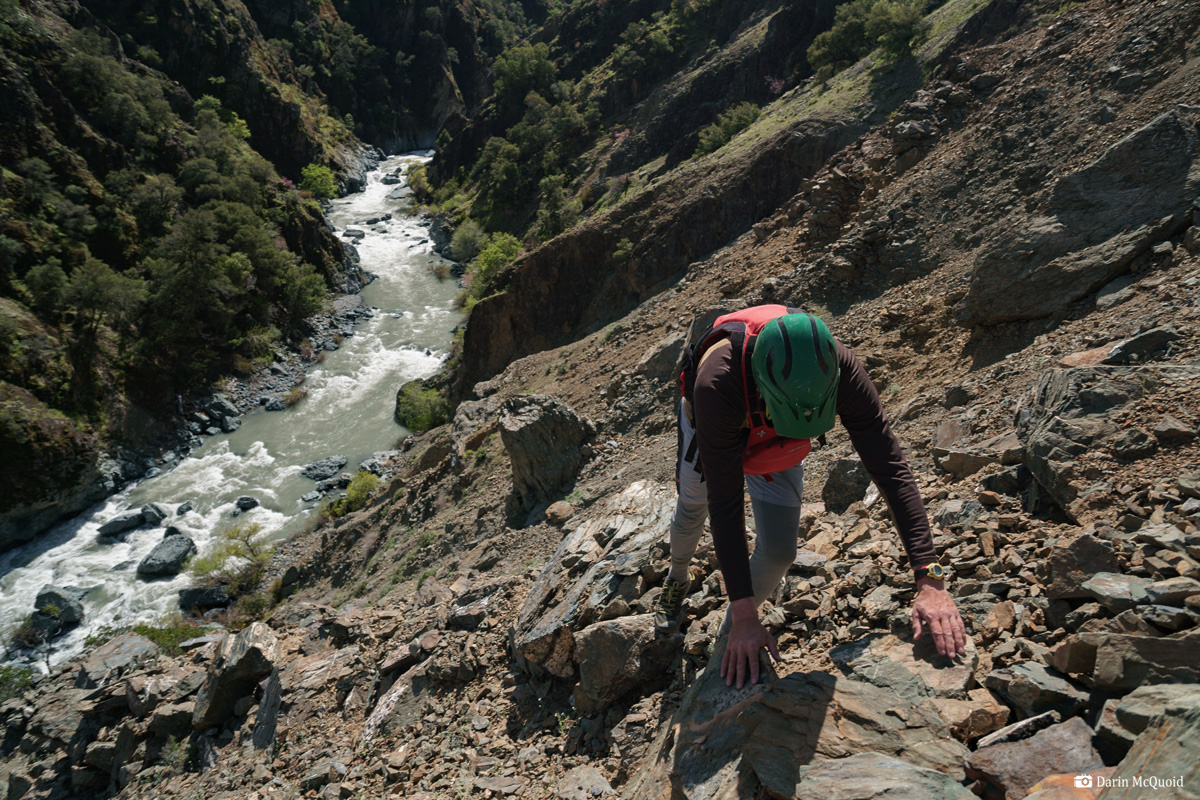 Looking back upstream at what we ran earlier. 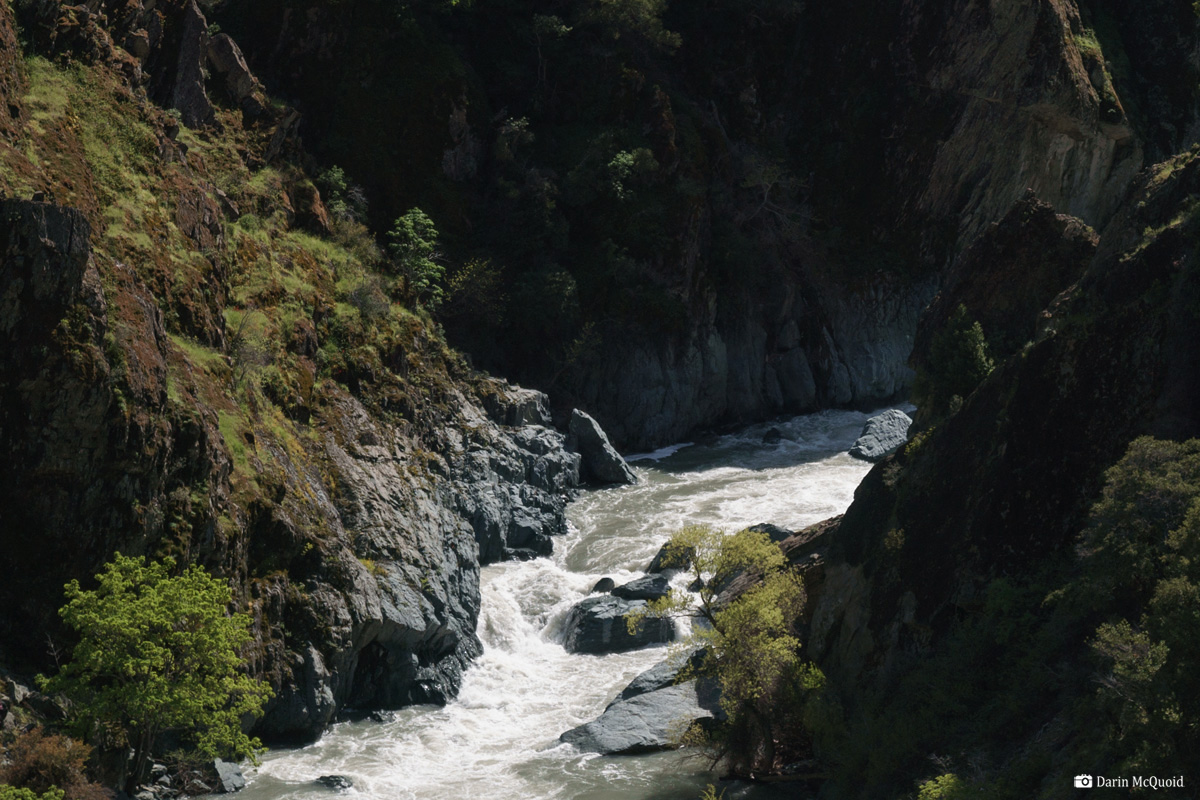 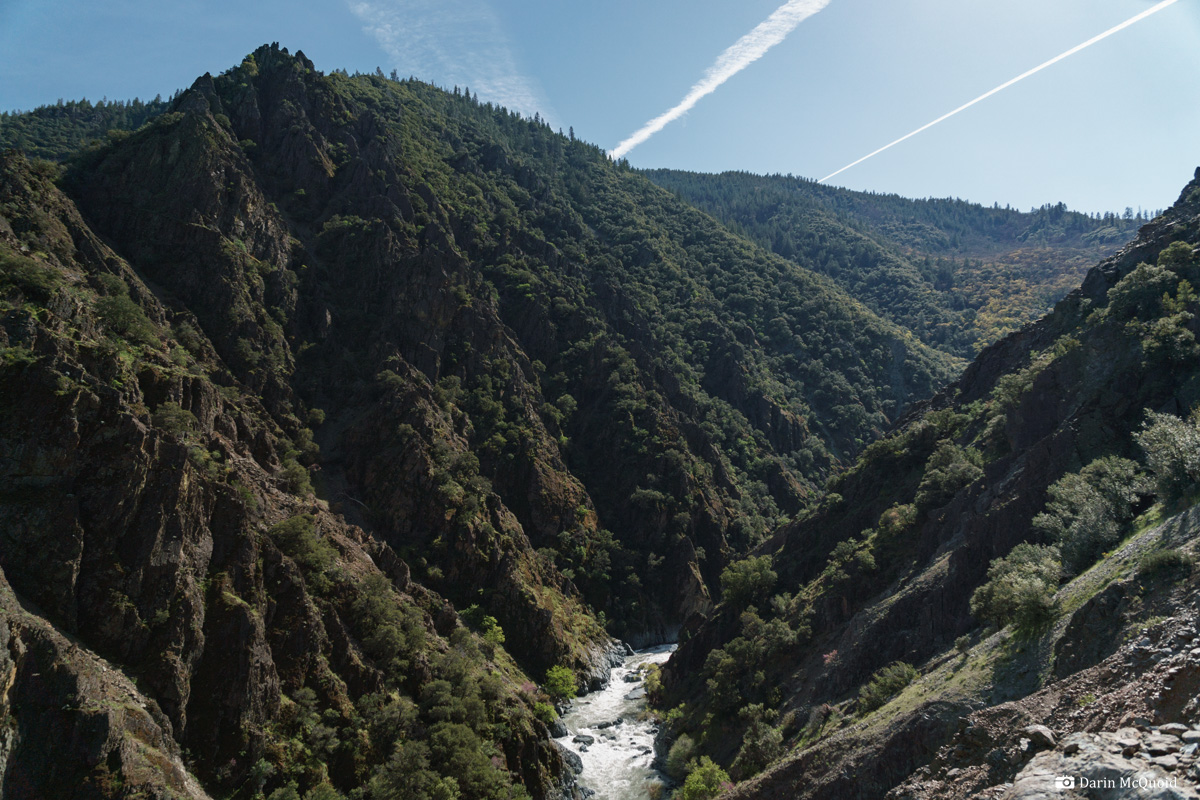 It's hot. We've made it to the apex of the portage. We don't know for sure how it will be getting down to the river, so we waste no time. 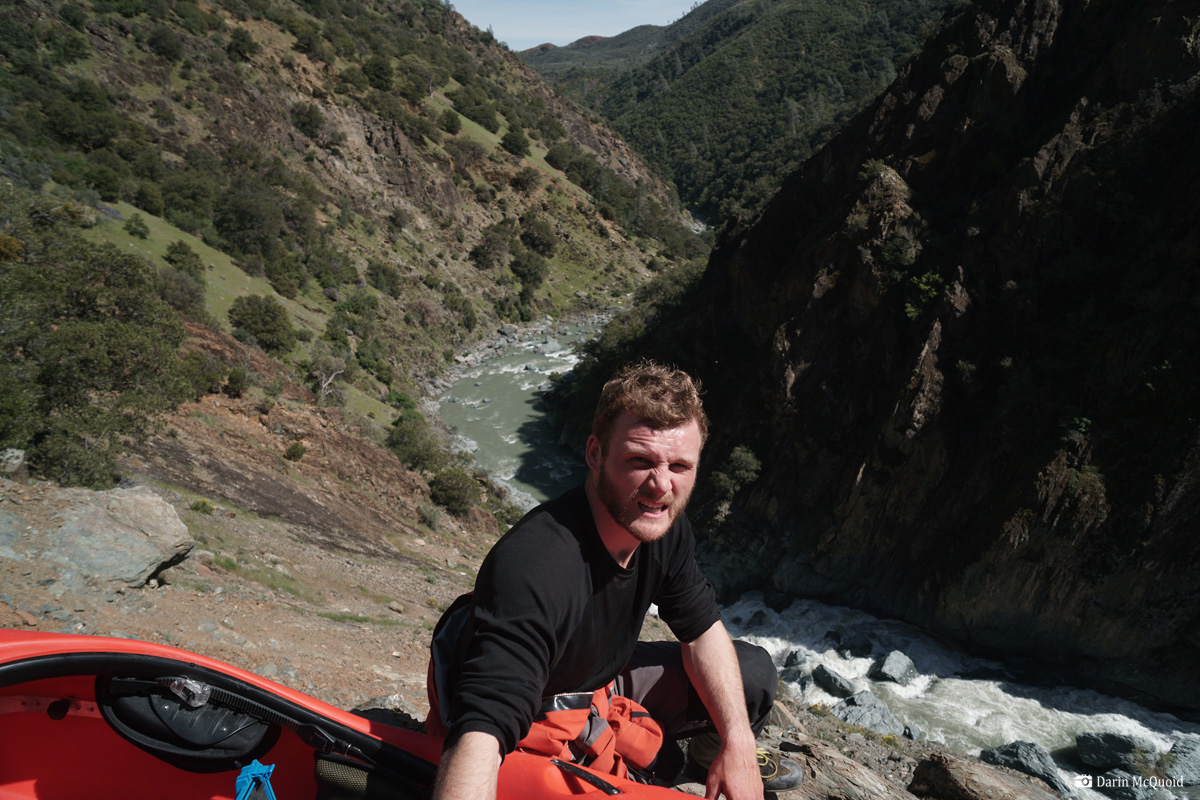 Once we see the rapid from below it's a good thing we didn't just decide to run it due to the portage. 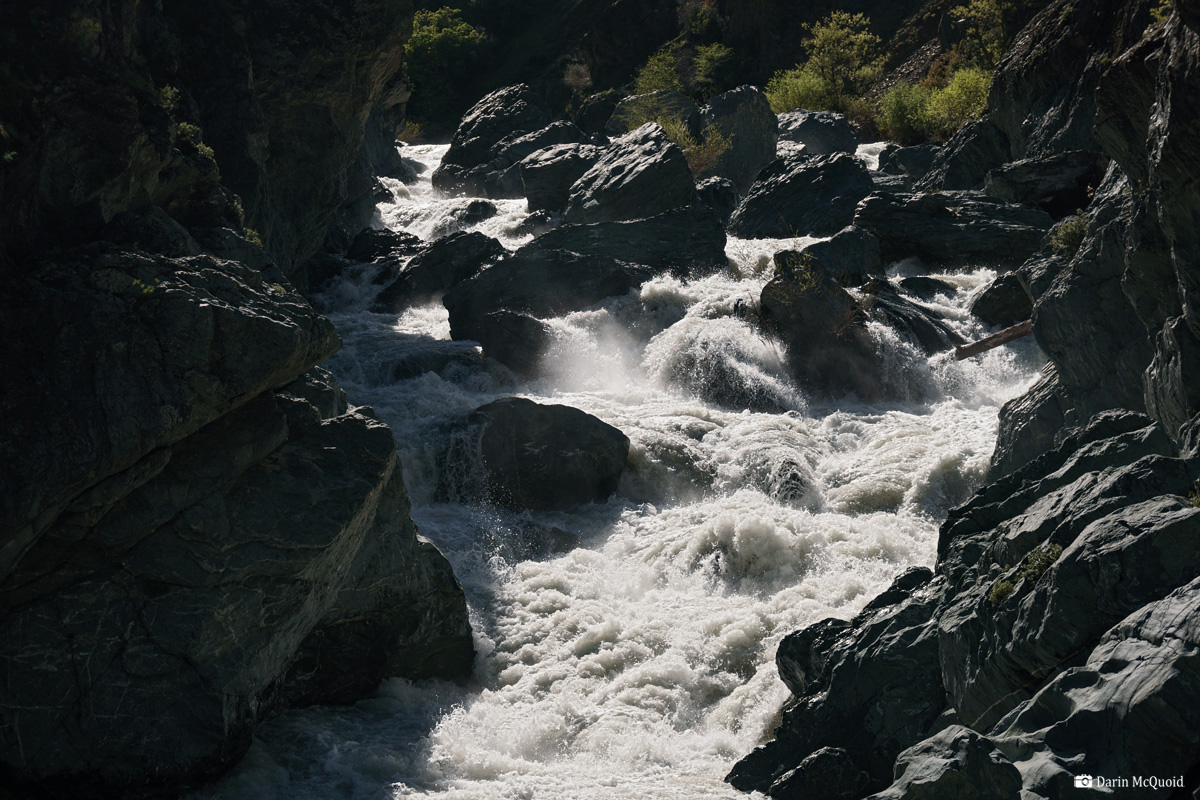 Two and a half hours after starting the portage and we make it to the river, now it's about 4:30pm. Gradient eases up as expected and we cruise down a mile to one last portage above the valley. Our easiest portage yet, and we're glad for that. Pulling into the upper valley just before 6pm we discuss our options. If we paddle out today it will be almost dark by the time we hit take out, and then we have to run shuttle and would home around midnight. Or we can just camp in a nice place. We have just enough food. It's a great location for another night out, we all have the next day free, and we're exhausted. The choice is easy. Plus there is that last gorge thing hanging over us. It's still down there waiting for us. 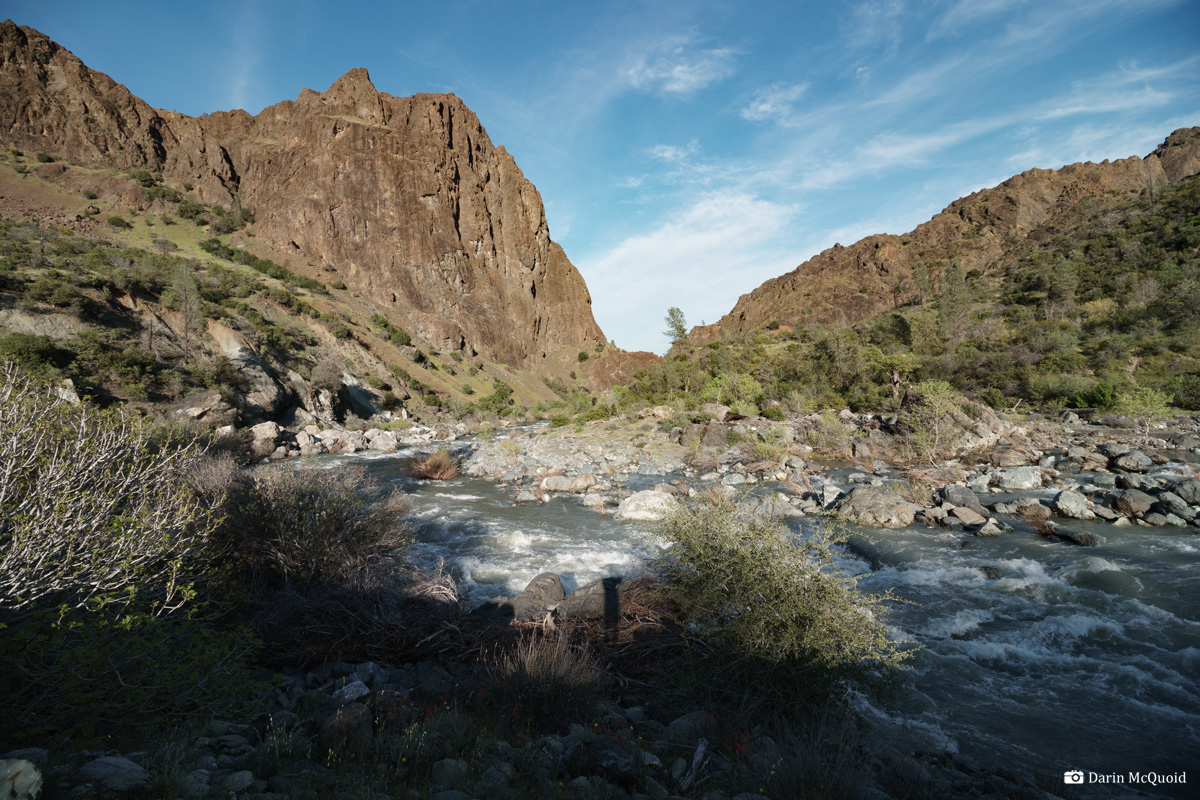 We catch the last rays of sunlight as camp is setup. 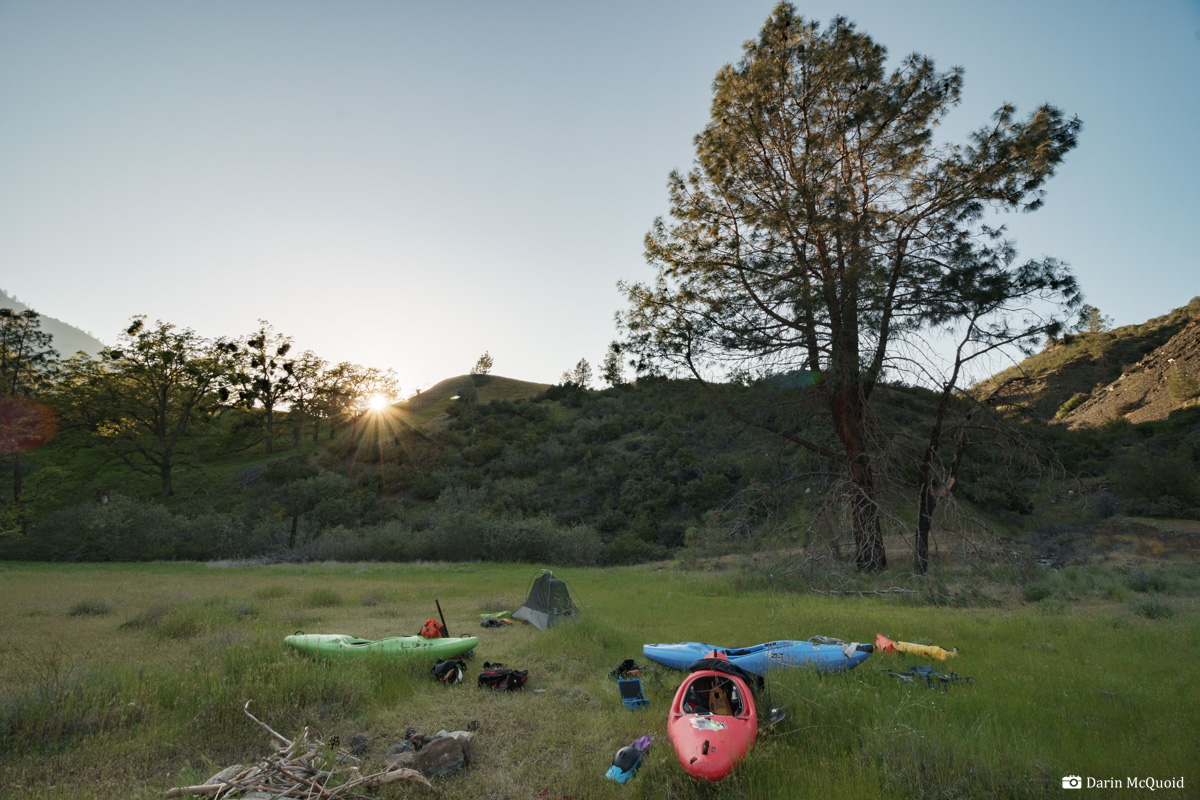 Joseph Hatcher and Luke Andraka around the fire. 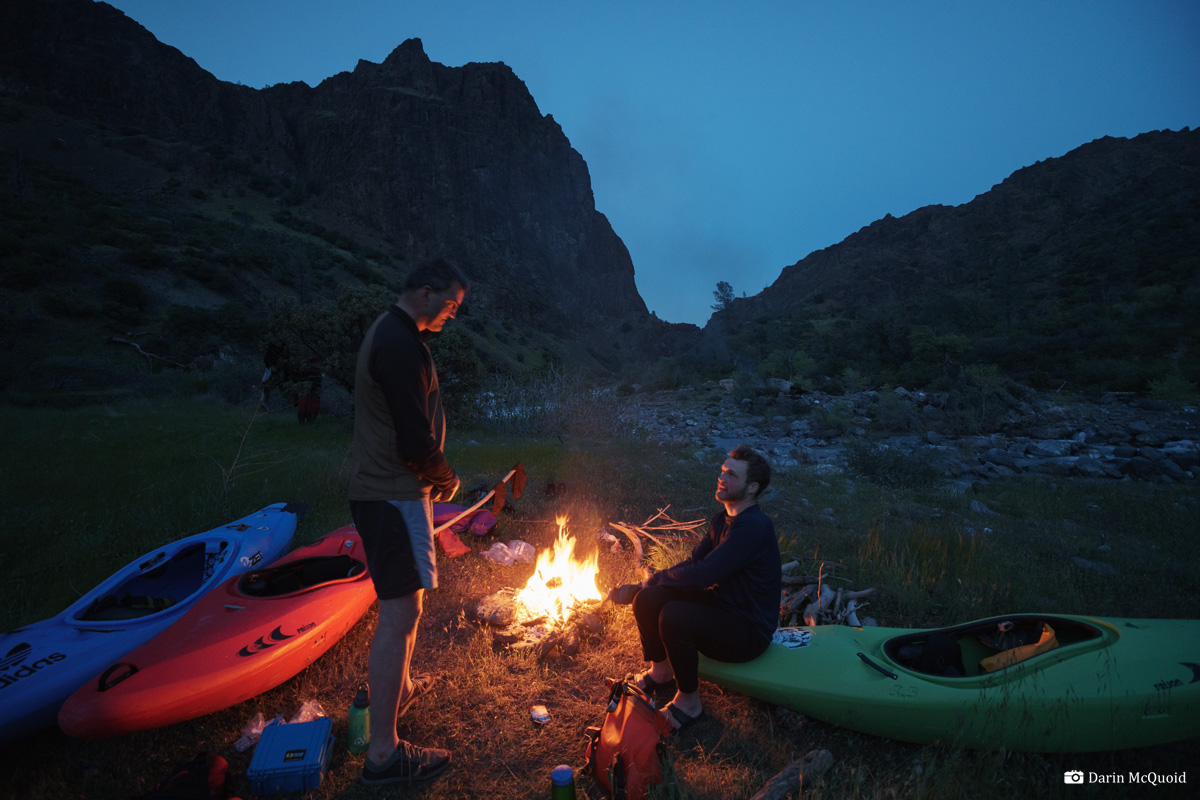 Stars come out as a backpackers campfire lights the flat before "The Gorge". 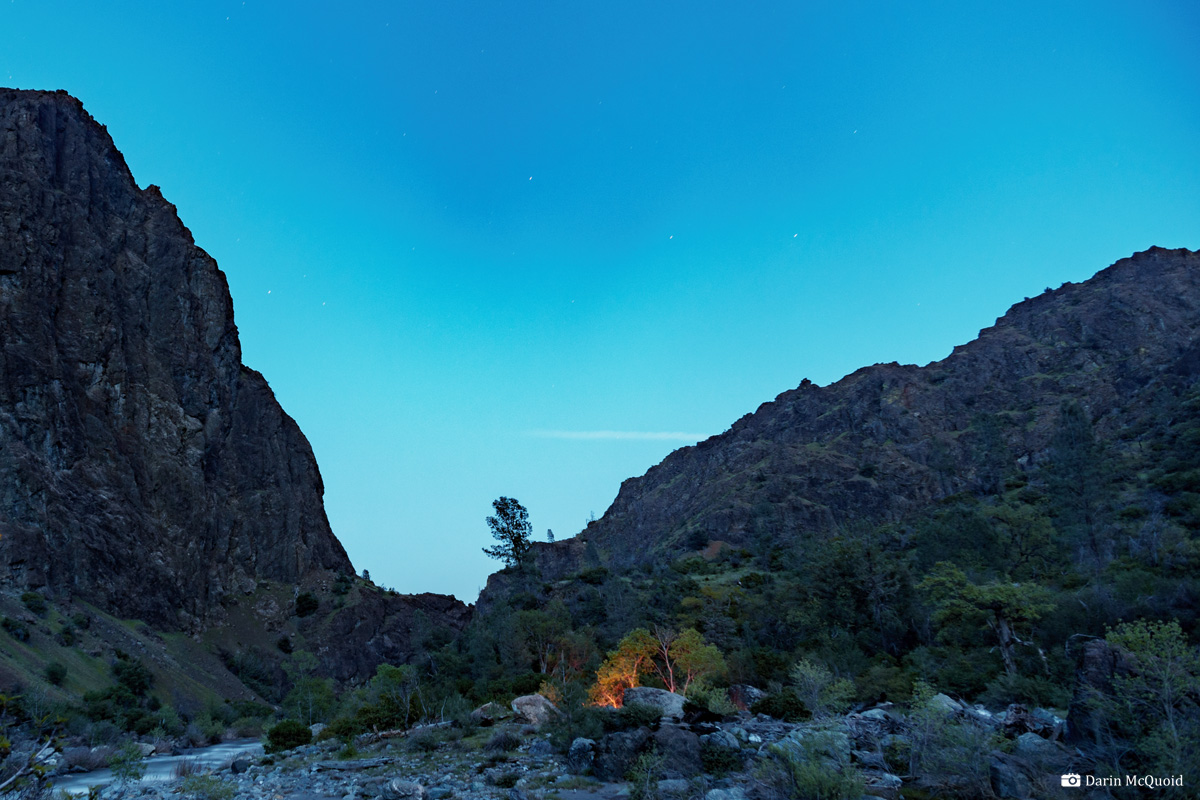 On to Day Three