We must have been exhausted from the hike in, because we set the tone for our trip by sleeping in late. Once up however, we made quick progress towards getting on the river, with only a few in the group giving the campsite slide a good look. The entrance and line looked decent, but a log in the run-out looked like a head hunter. Ben decided it had enough height to duck it, and fired off a nice wake-up slide.

Probably awake by now, Ben Stookesberry runs a manky one.. 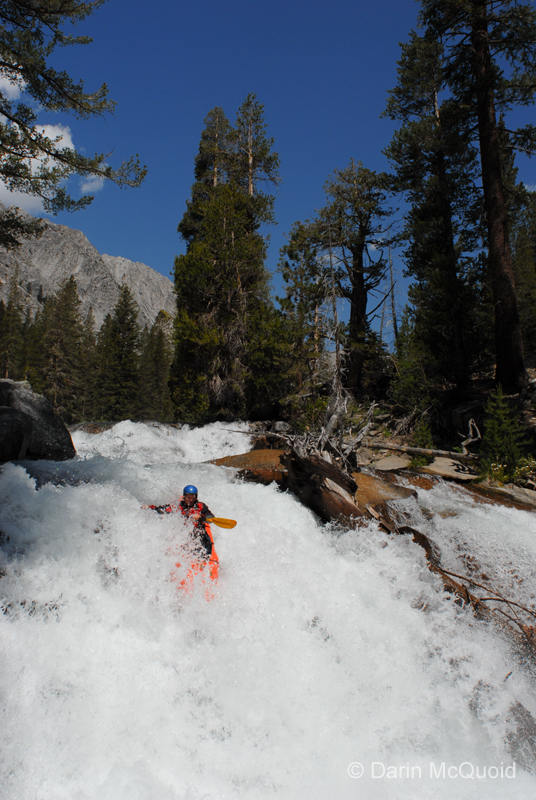 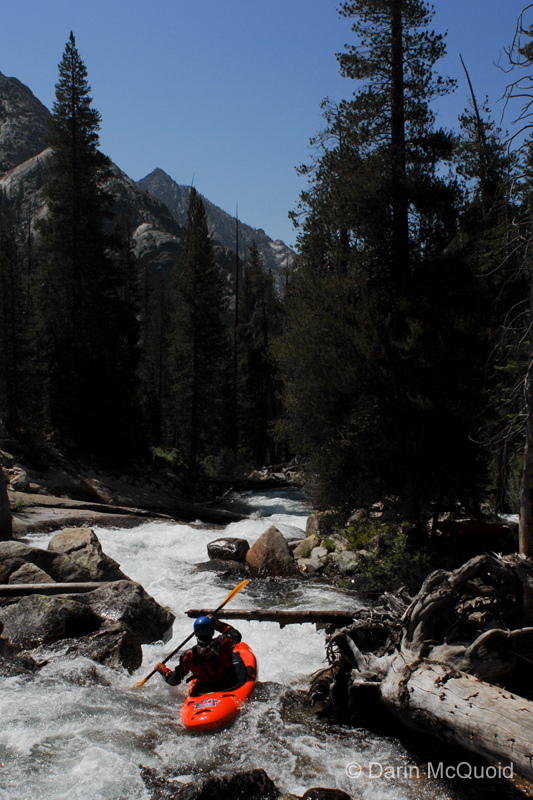 Only a short bit of mank had to be endured before the river started turning into every expedition kayakers dream, big drops in gorgeous scenery. 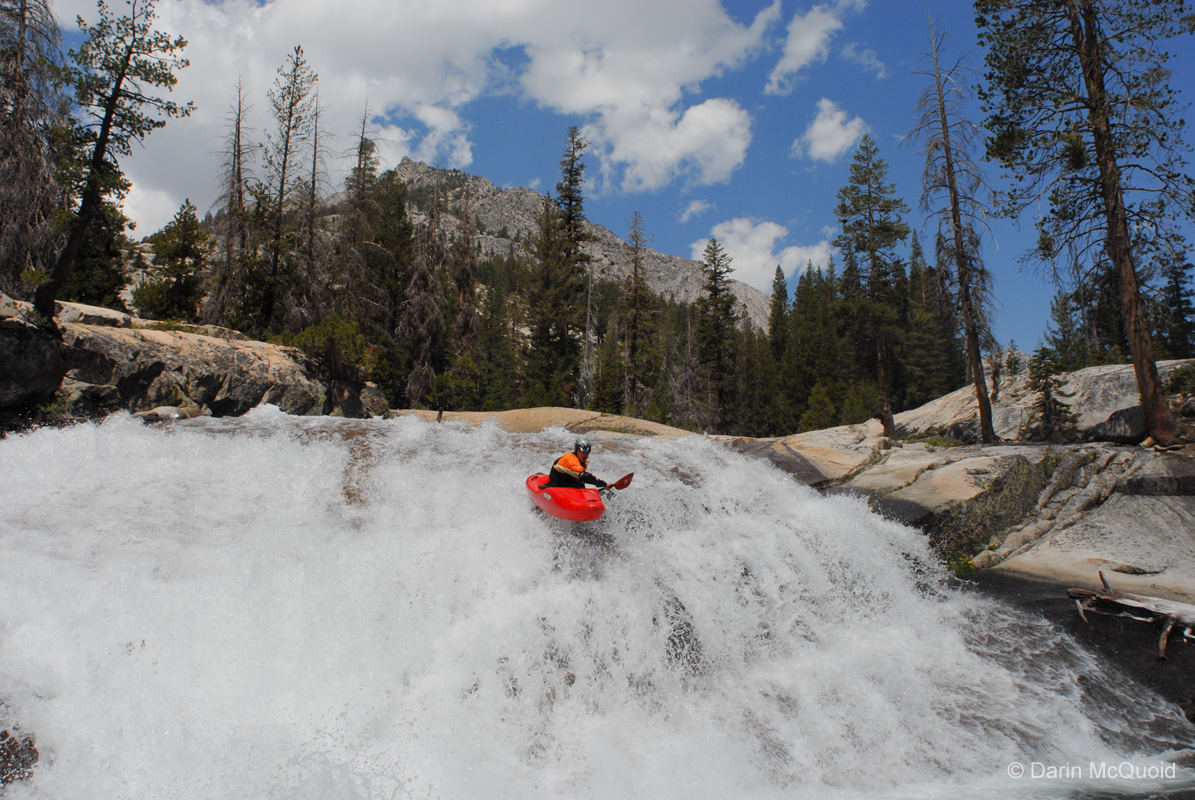 Gary Edgeworth below the drop with a “hell yeah we’re in the good shit now” sign. 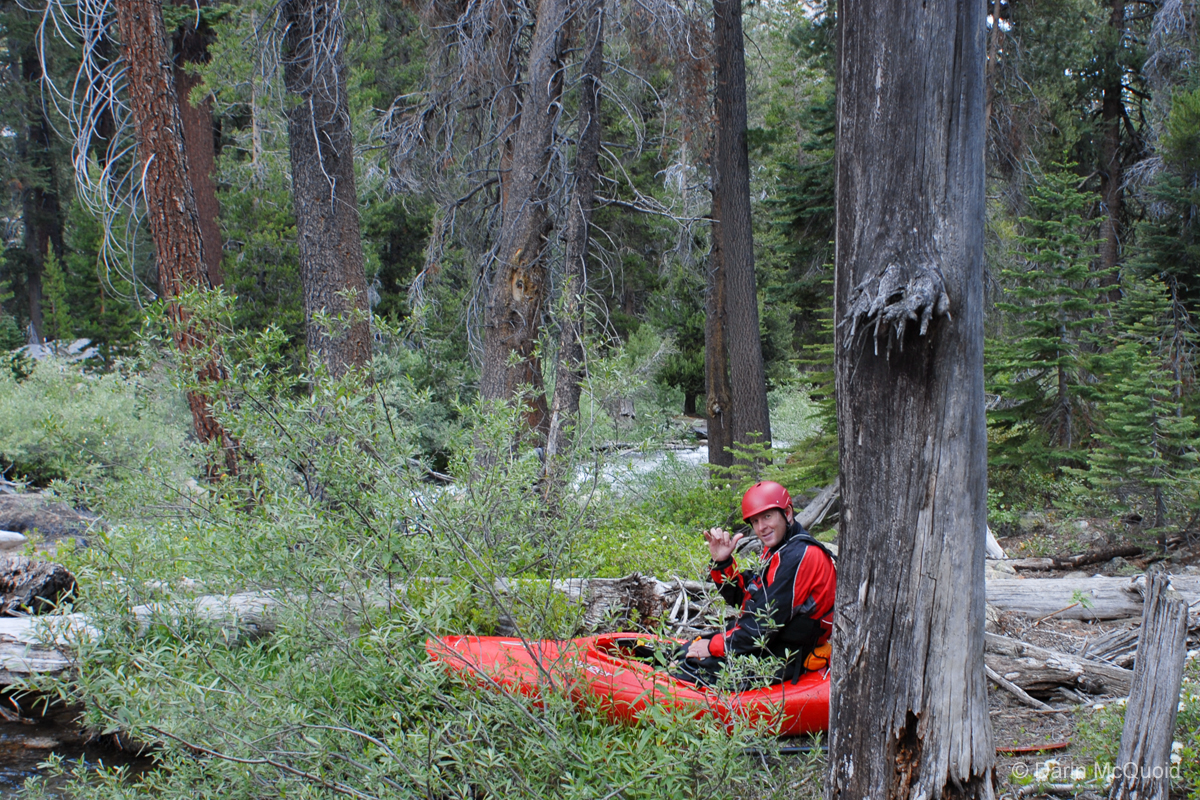 A little log dodging action led around the next corner, to the confluence with Palisade Creek and some truly epic scenery.


Forrest Noble soaks in what the Middle Kings has to offer. 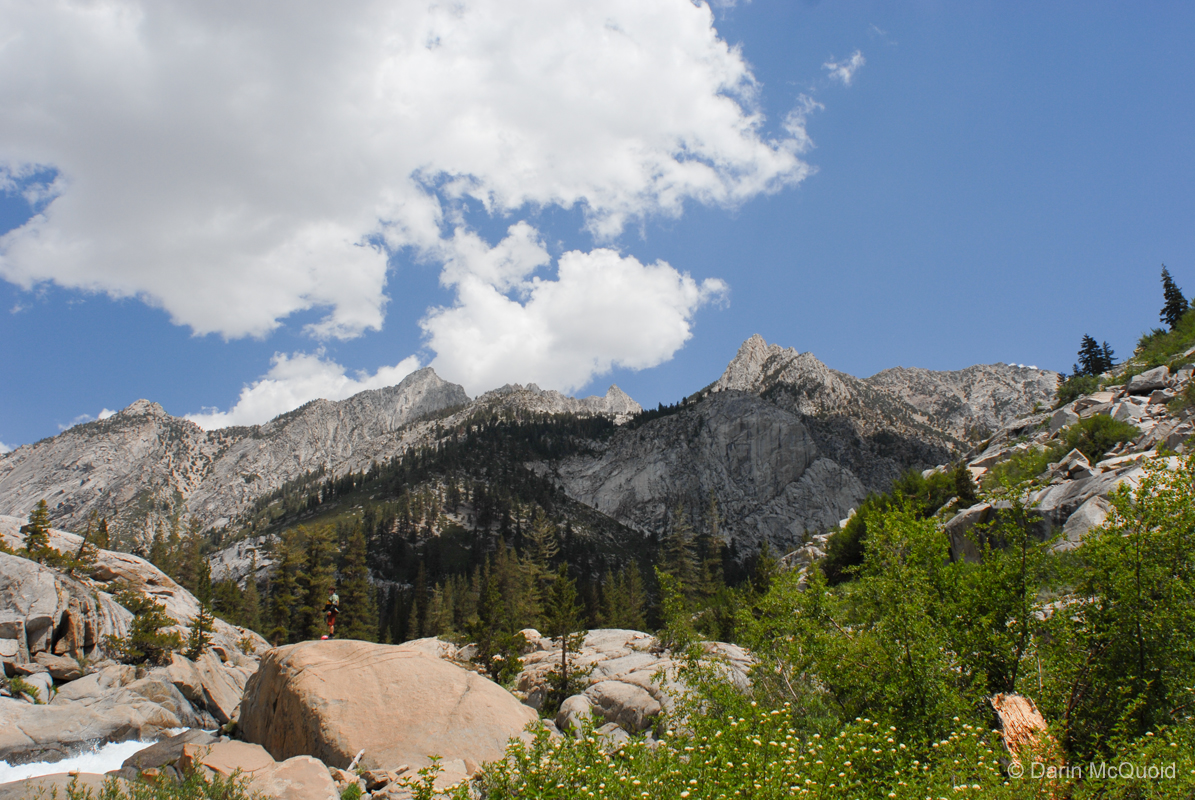 Besides great scenery, this spot also offered up one of the marquee drops of the Middle Kings, Squeeze play. It’s a narrow twenty footer, and the water must be at least ten feet deep as it pours over the lip.


It also has a big hole and undercut, and even larger run out rapid. 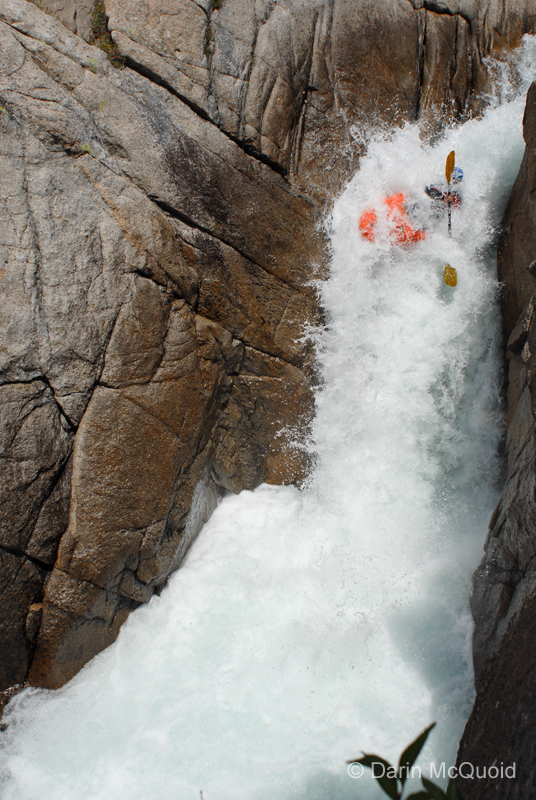 The rest of us portaged down the right, where we ran some nice boogie water down to yet another horizon line. Ben gave us the beta on this one, a shallow eight footer onto a slab. The ideal line was down the middle, getting your bow up a little but not boofing. Ben then disappeared over the horizon, and I followed, letting my bow drop and getting a nice transition. The next person behind me boofed too much, and his foul words inspired the rest of the group to portage on the right.


Ben said every time he does this run people always end up portaging it after the first few run it, so he has always missed getting video of it, as I did getting a photo. Maybe next time. 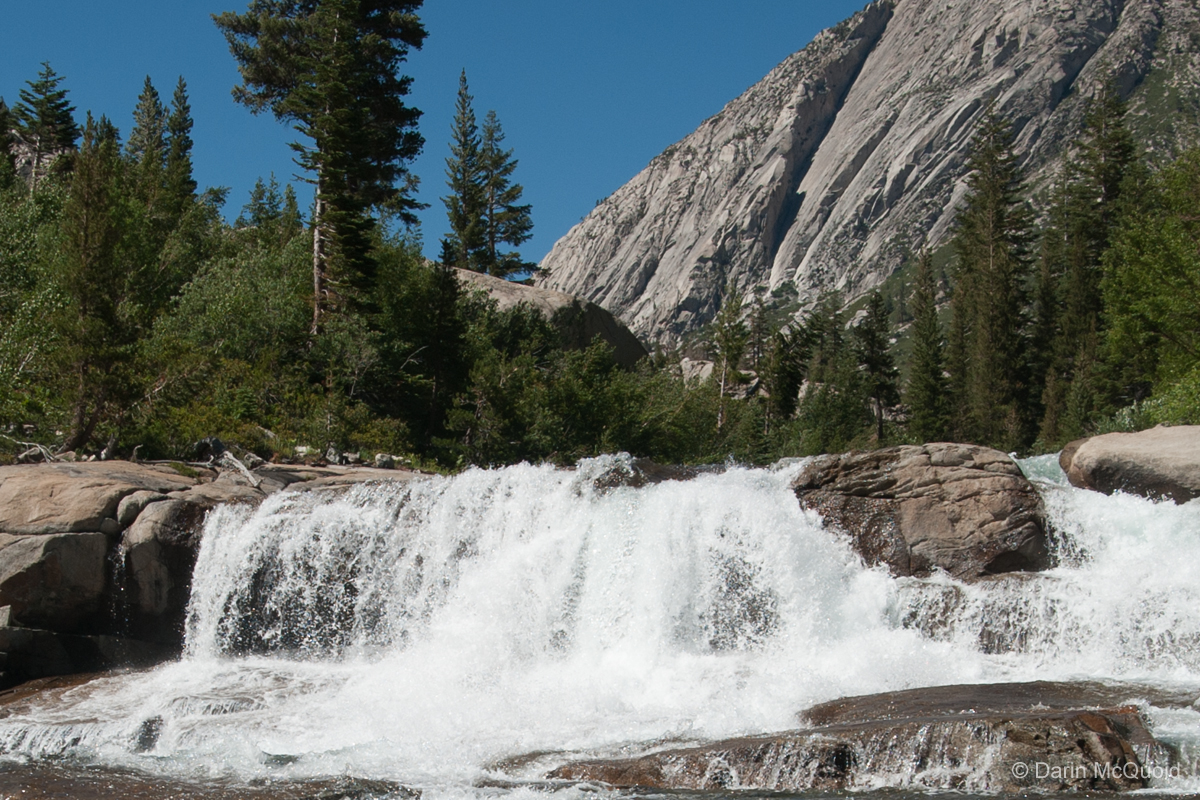 Next up we had a handful of nice slides with the ever present epic scenery. Gary Edgeworth enjoys the view. 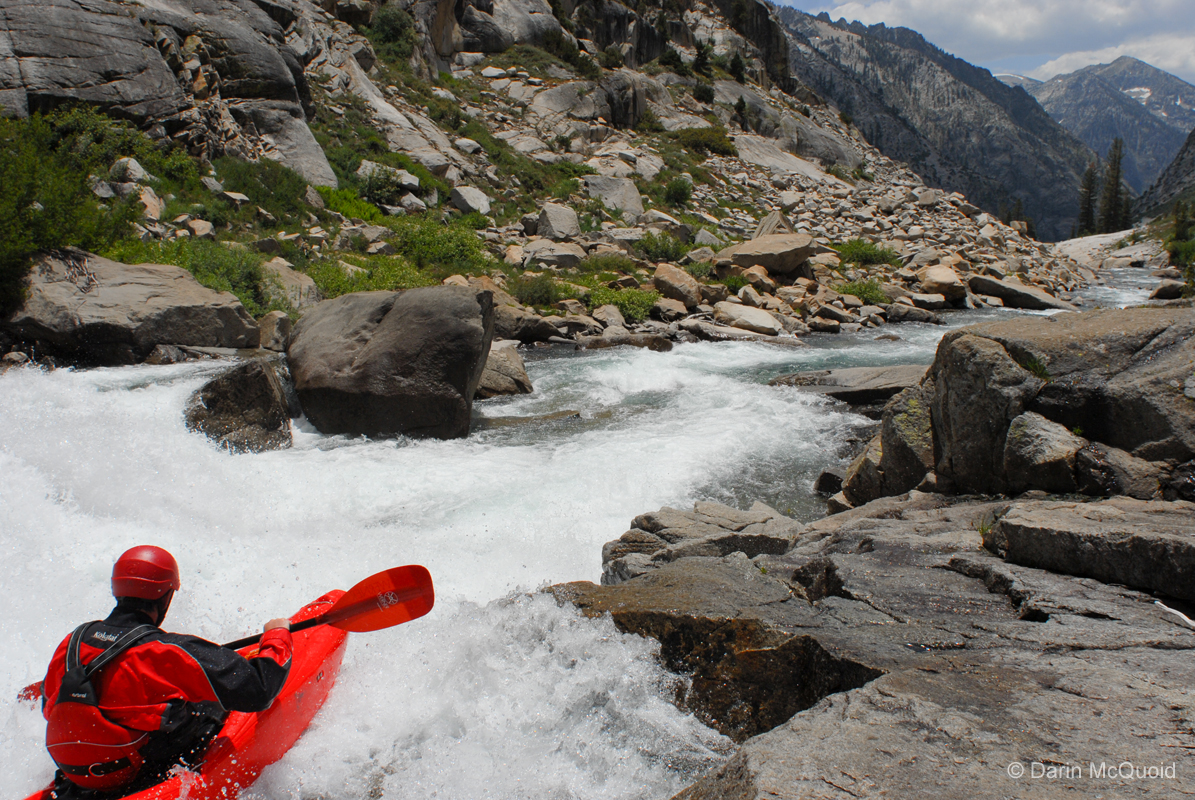 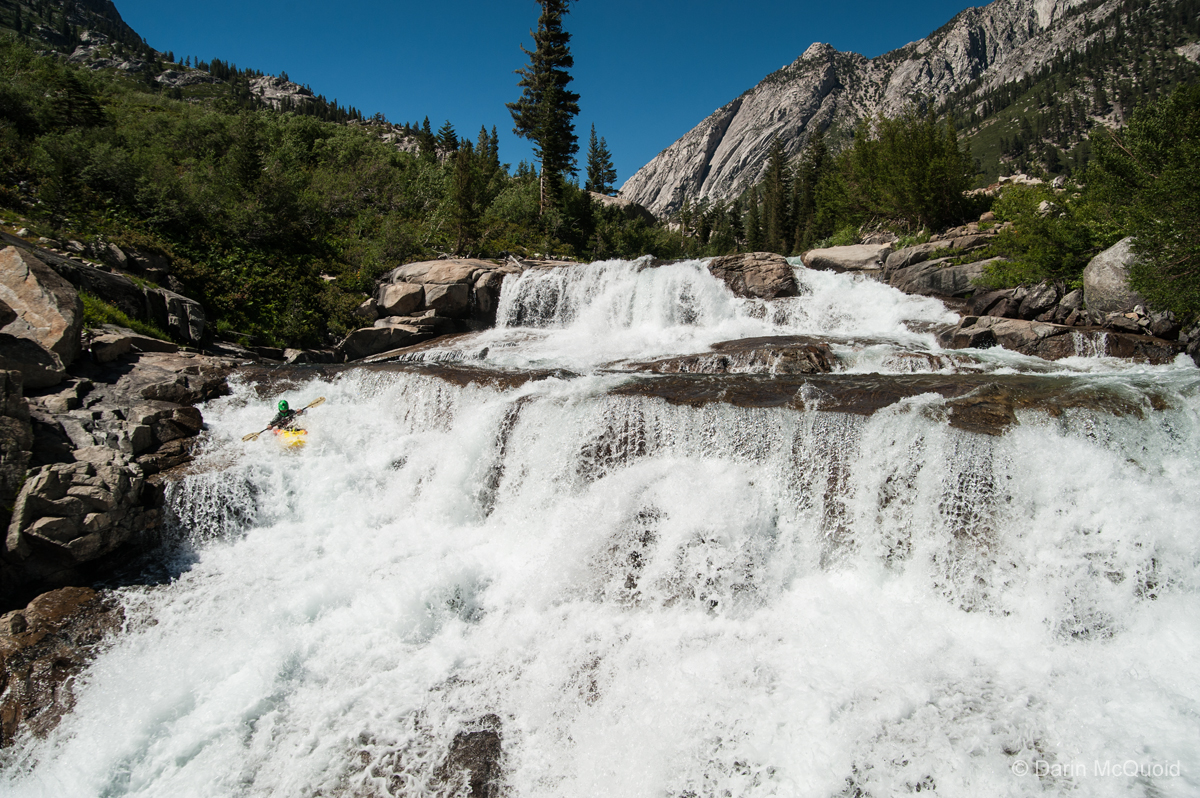 The mellower slides lead into the last un-run slide on the Middle Kings. We all started portaging down the left, except for Ben, who started giving it a good look. He had been talking about it during the whole shuttle, trying to talk Chris or myself into saying we might run it. One quick look at it while walking by didn’t peak my interest.

In some ways so simple, and others complex, a thirty to forty foot slide with massive rooster tails. Gary said it looked like “a can of crushed ass” but Ben continued to give it a good long scout while we ate lunch. After considerable time scouting, he decided there was a line around the first rooster, and that it transitioned through the second rooster tail. We all get our media equipment and throw ropes ready as Ben hiked back up to his boat.


Ben  lines up an intimidating first descent. Just look at the rooster tail at the bottom! 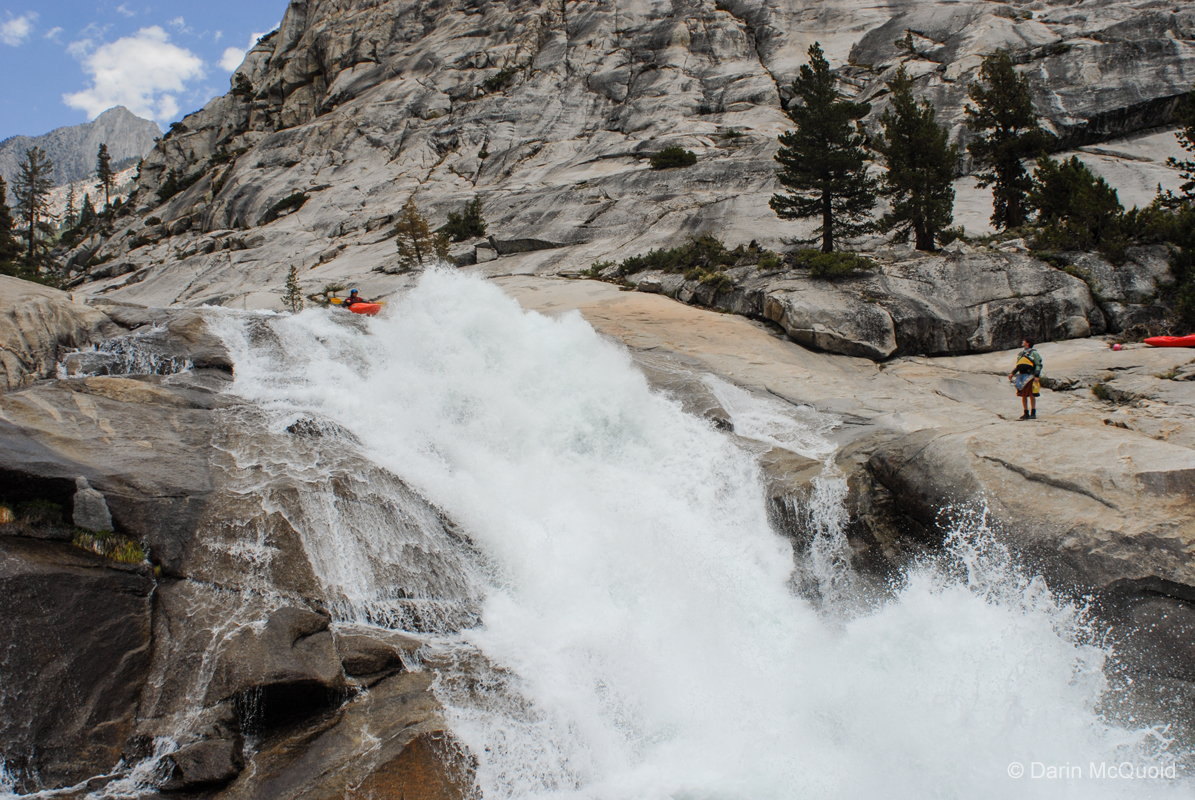 Straight away through the slide. 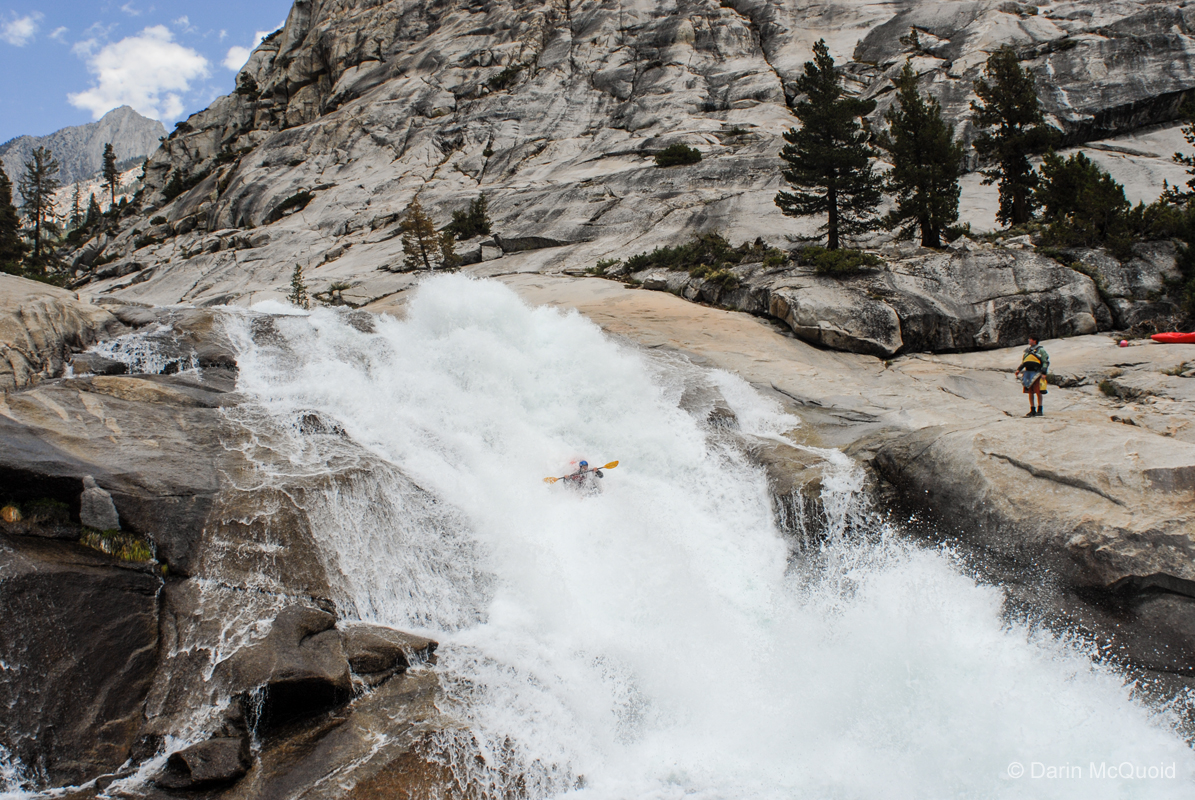 Ben said the whole thing was smooth, and dubbed the drop “butter buns” as we headed down river. Take away the length, wilderness setting and scenery of the Middle Kings and it would still be an awesome river just for the amount of quality whitewater it contains.


Jason Stingl enjoying all of it on the Middle King’s signature Money Drop. 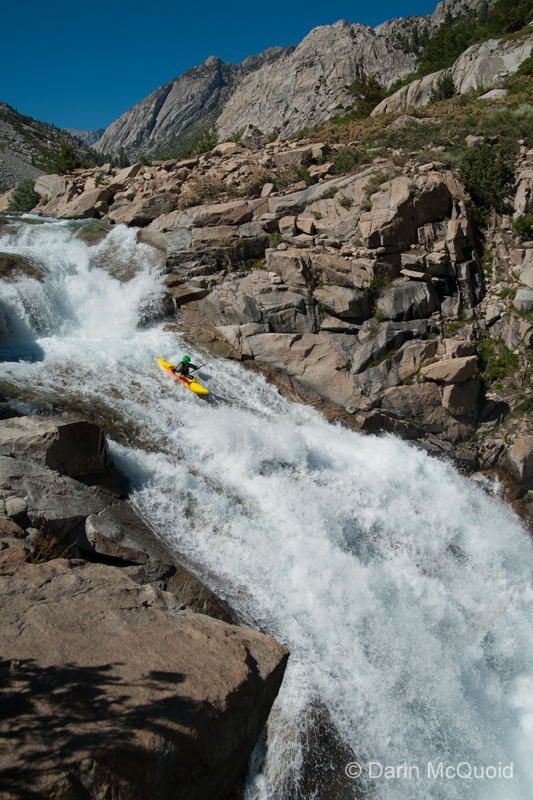 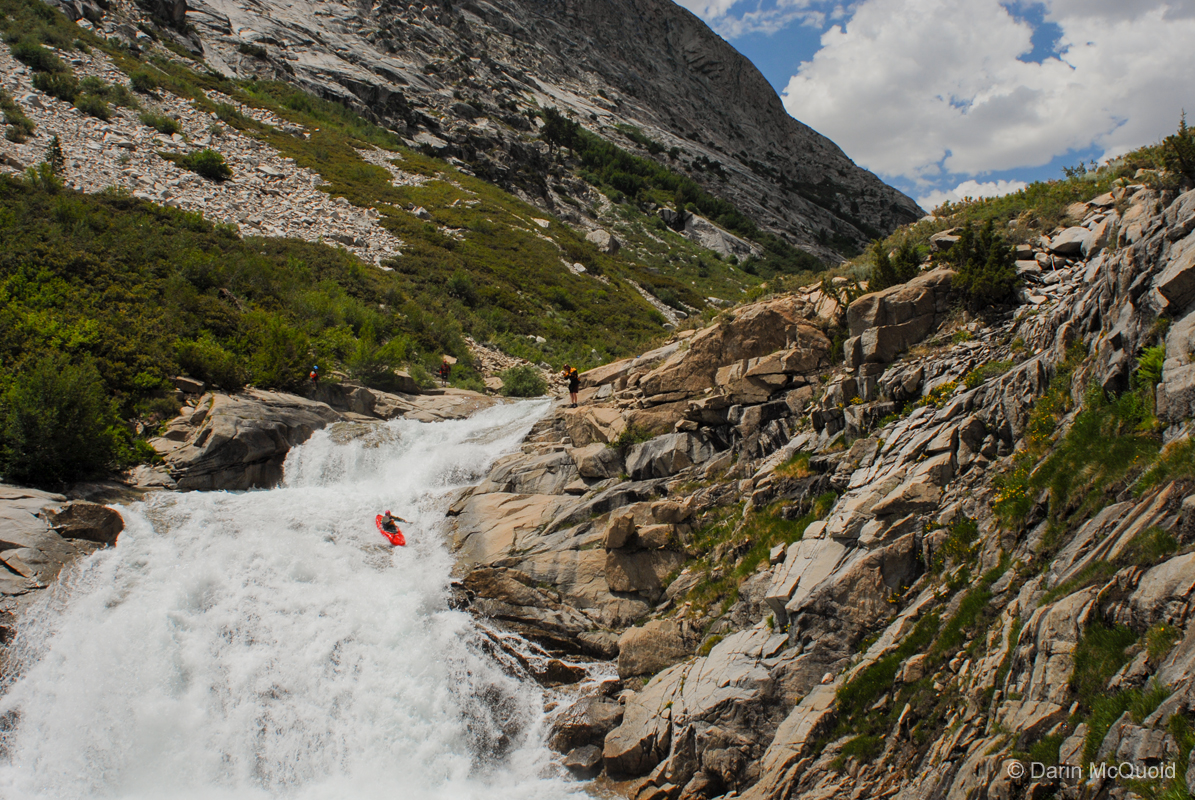 Downstream view from the same spot, ever impressive canyons on the Middle Kings. 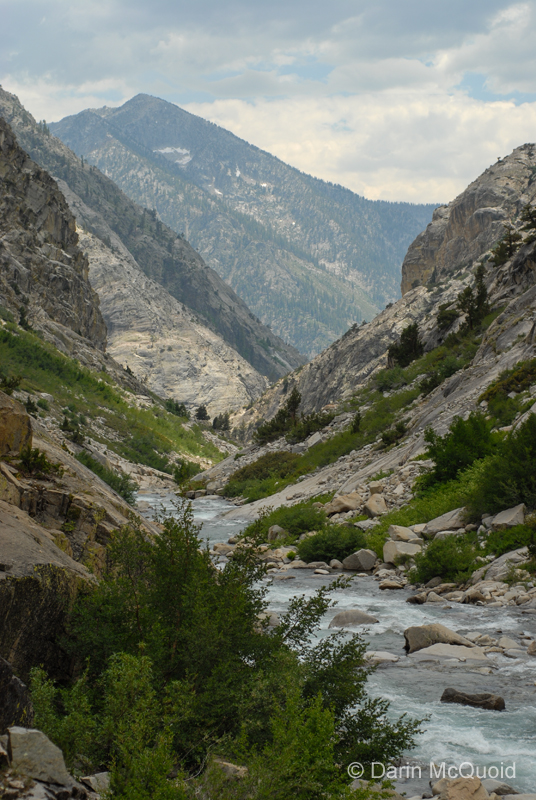 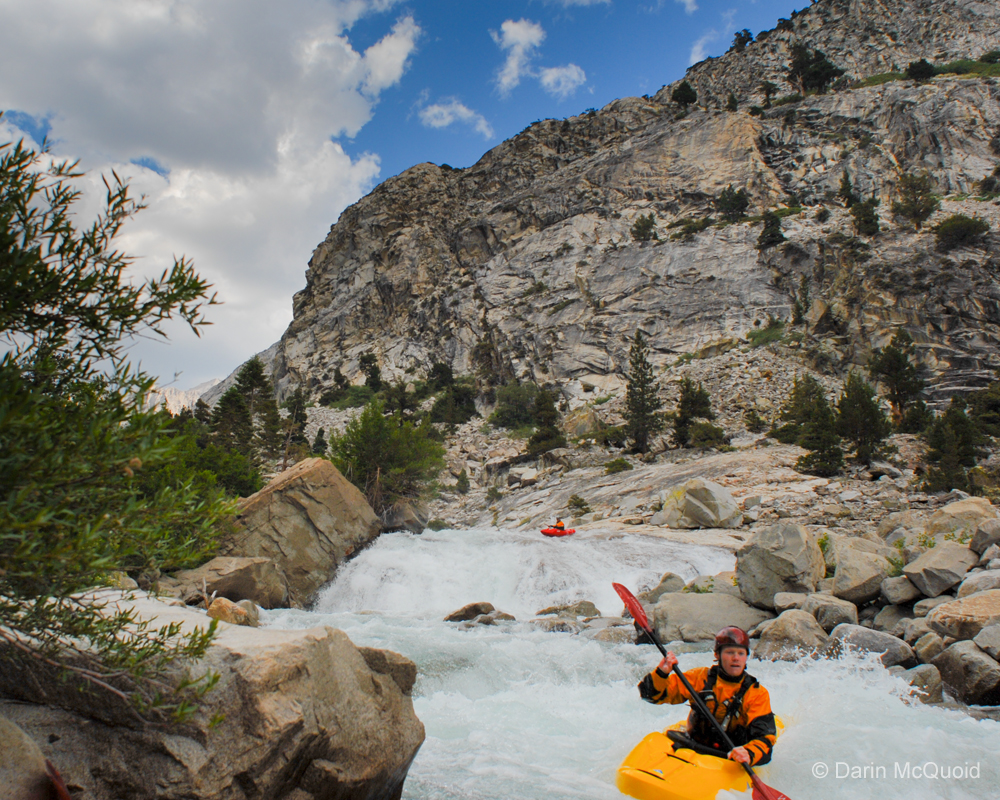 Corey Boux below a long boulder garden and heading into a steep section of ledges. 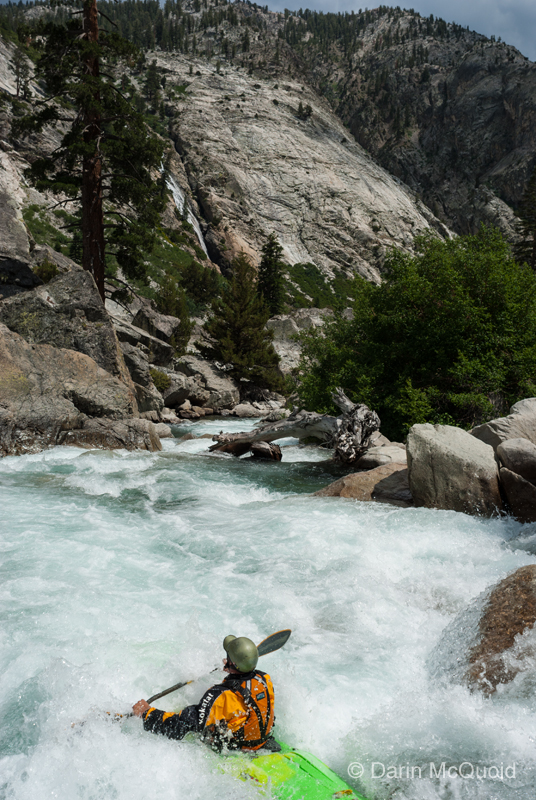 The next section might just be the steepest and most often run hard section of the Middle Kings. At medium to low flows the ledges aren't too bad, but they are significant and sticky as flows increase.


Note how the size of the boulders puts everything in perspective, we are on a small scale in this place. Corey Boux 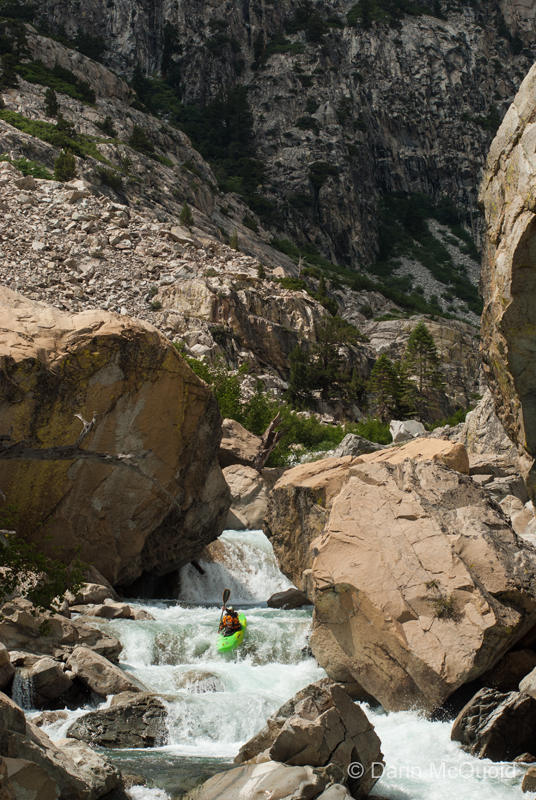 Did someone say sticky? 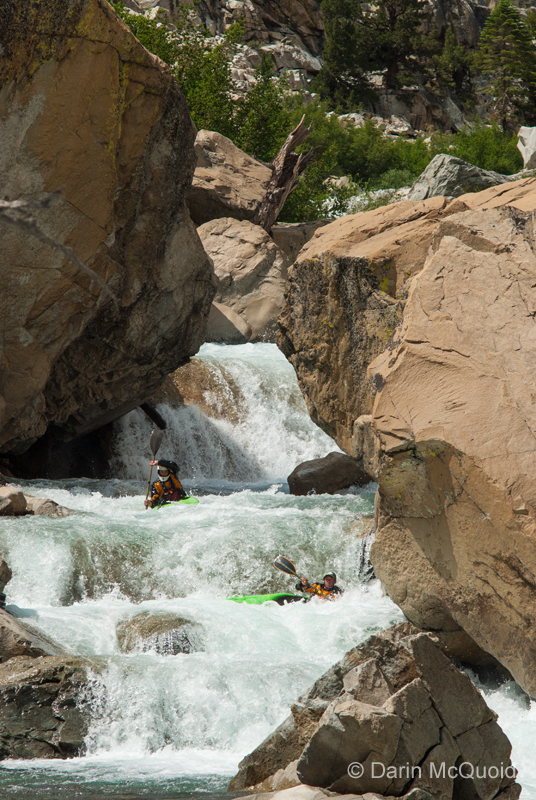 Justin Pat about to exit the ledges act one. 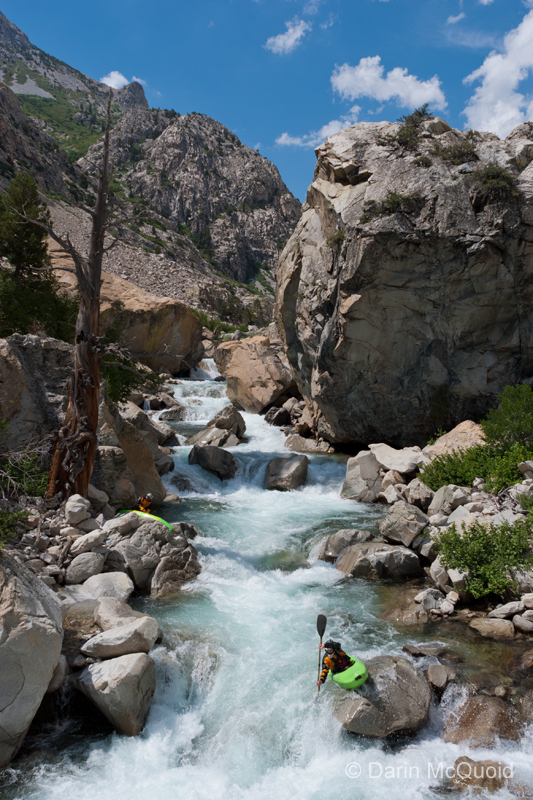 Eric Seymour boofs over yet another big hole in ledges act two. 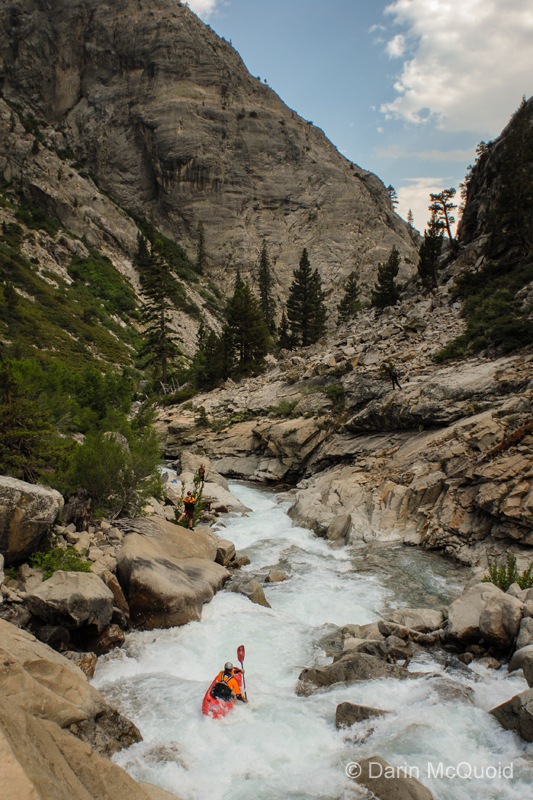 Looking upstream at the same drop as the previous two photos, Ben on the last of it. 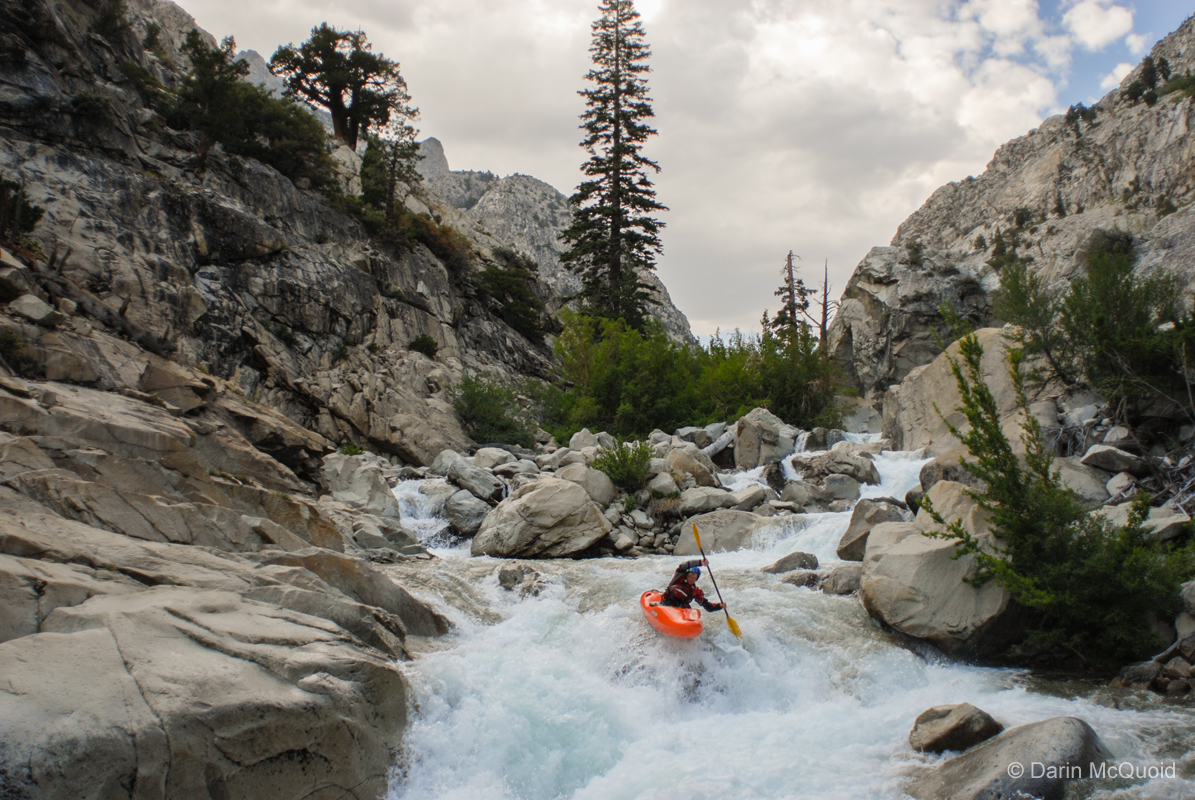 While Gary and I got back in our boats, Ben scouted the “Devil’s Washbowl” slide, a two hundred foot long high speed slide with a big pothole in the center. Coming back up, Ben told Gary and I the line, starting right and moving left over the crack, and finishing left. As Daniel said, you can only run it blind once!

Steeper than it looks from most angles. 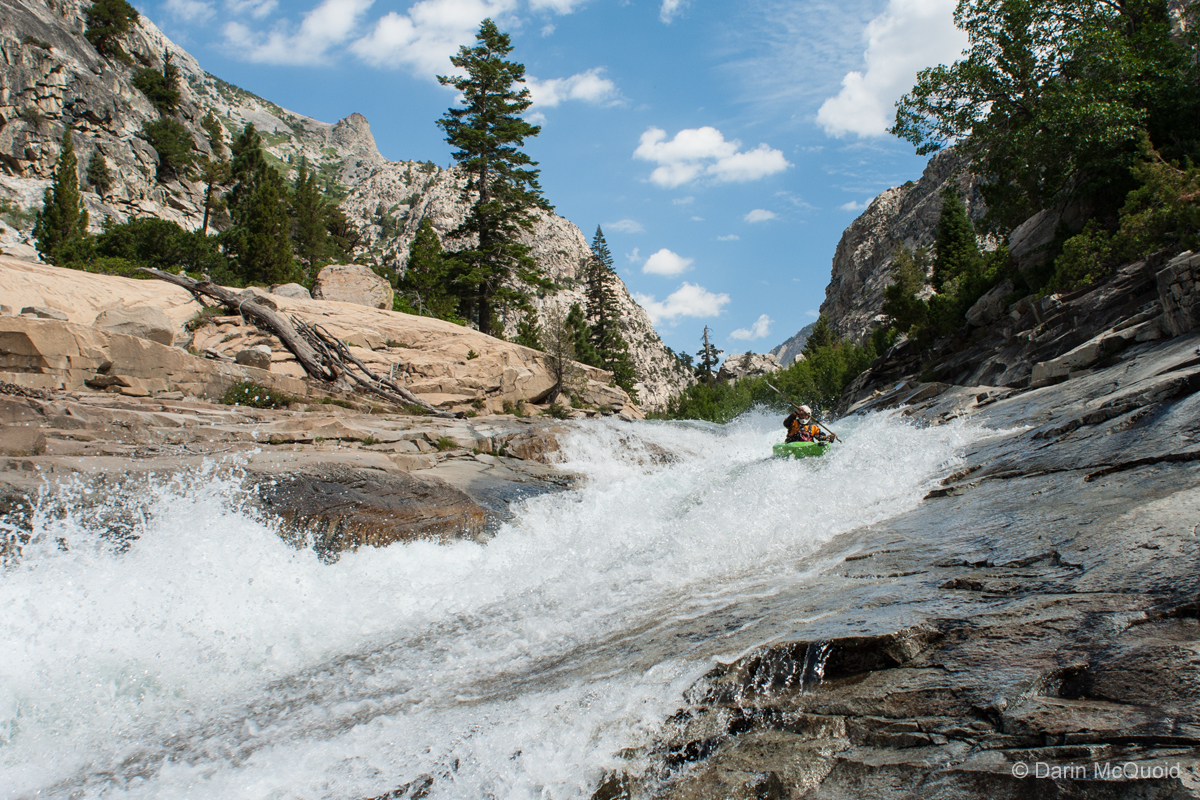 The Rooster Tail and Justin Pat 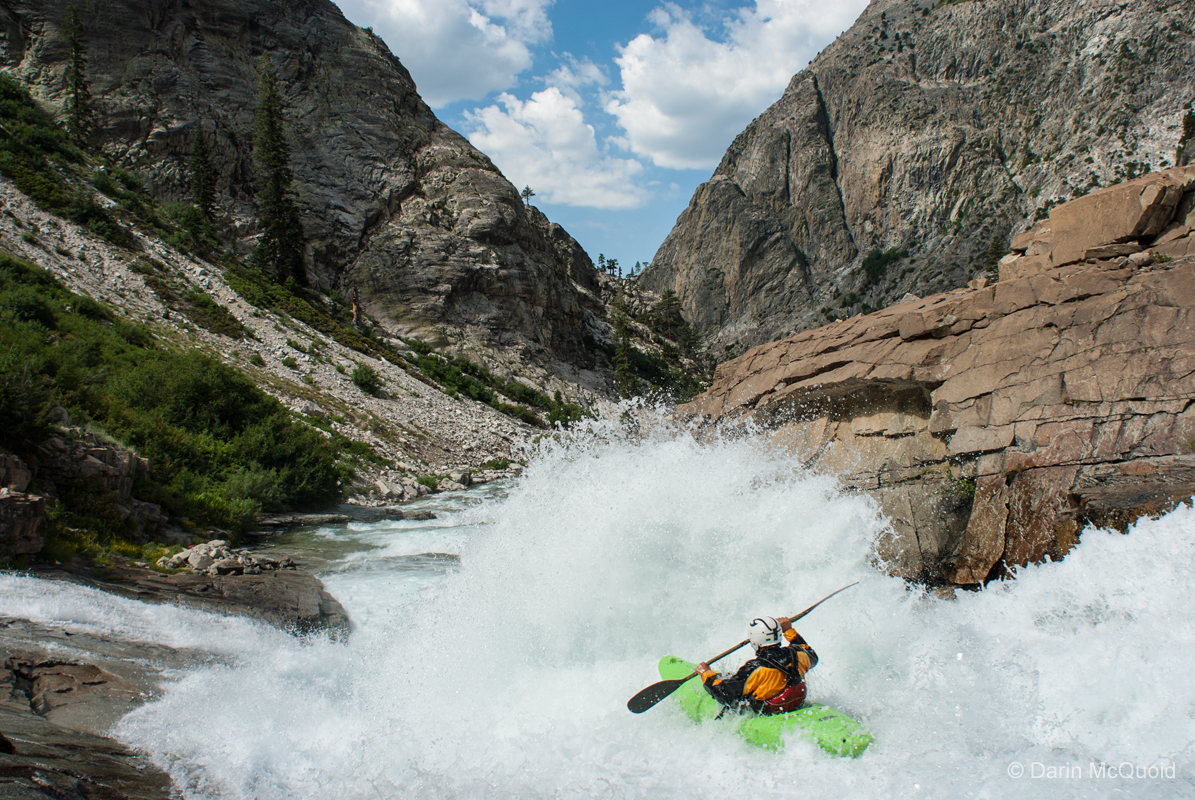 Besides the beauty of the canyon and epic Washbowl slide, a tributary cascades down, seemingly from nowhere. 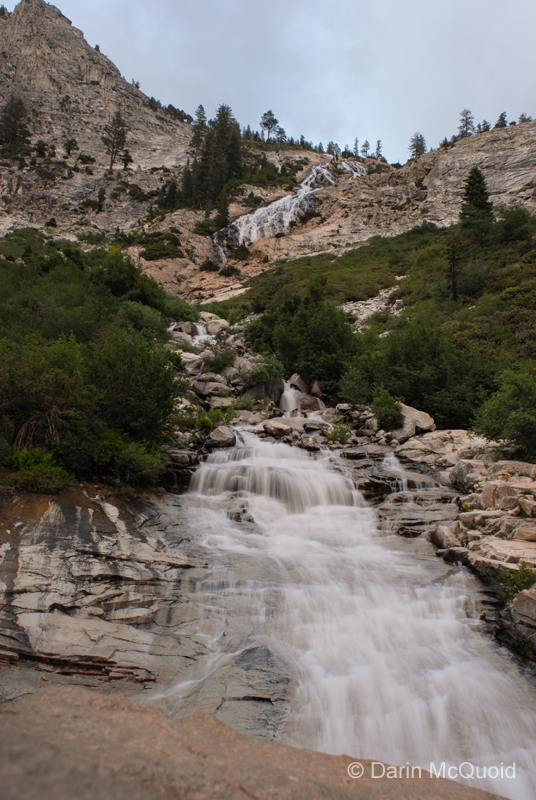 With what may be the best day of whitewater on the Middle Kings behind us, we settle down to mellow evening in the perfect setting at the top of the Devi's Washbowl Slide. 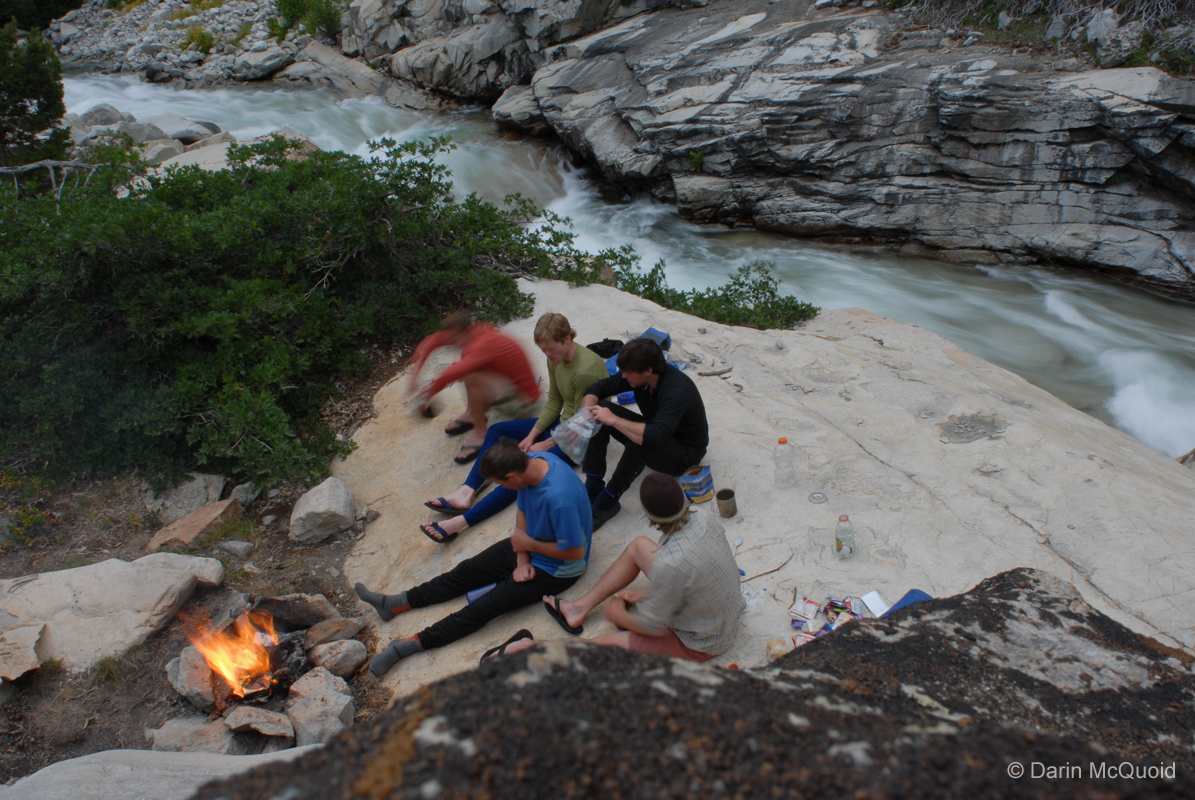