Middle Kings V-V+
Four days into the mission we were all feeling a little tired but had a big day ahead of us. We planned to paddle through the last of the Middle Four, take a quick break in Tehipite Valley and push as far as possible into the Bottom Nine.


Not the most ideal campsite. 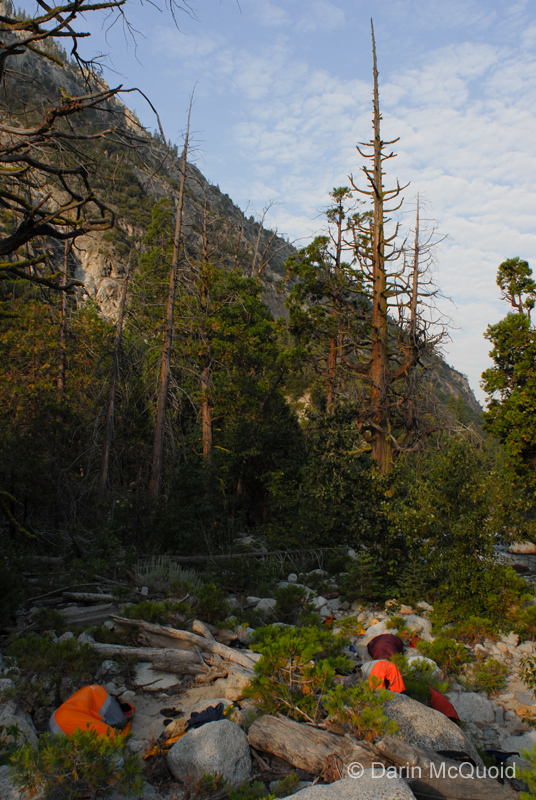 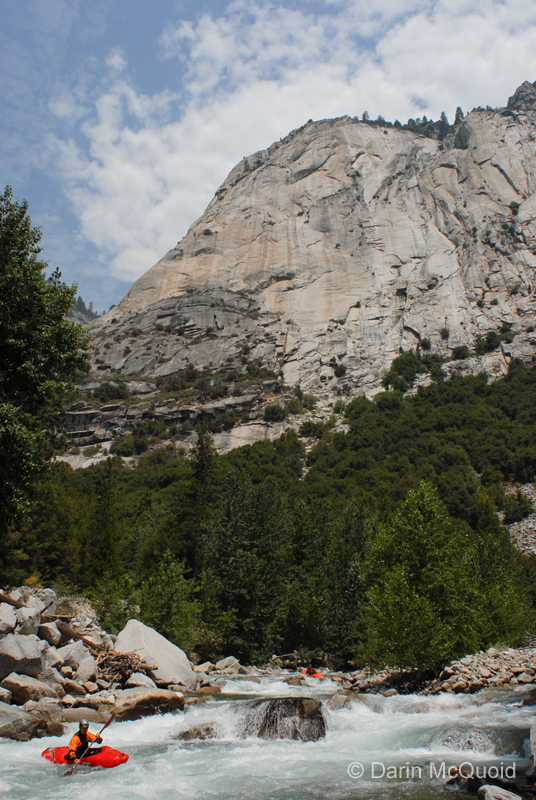 We made relatively quick work of the last few miles of the Middle Four, with one portage around the Big Bad Beaver, a massive slide that has seen several descents but none from our group. 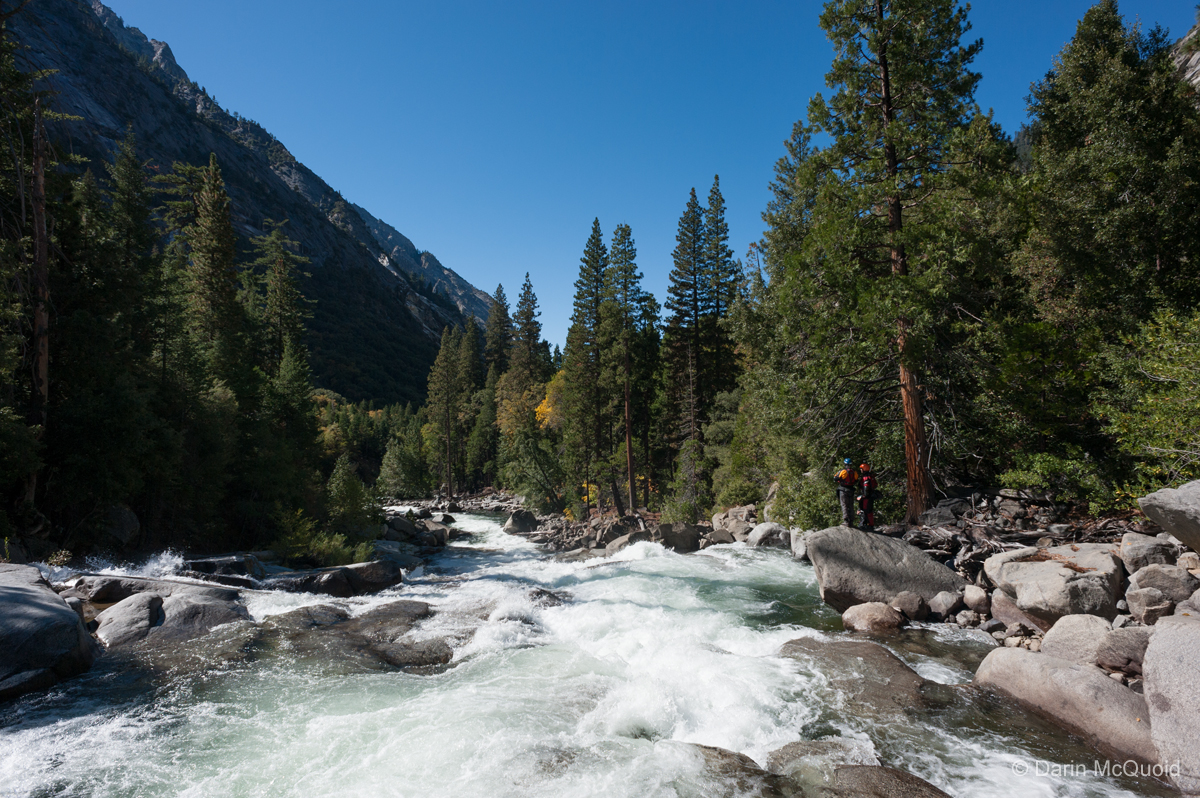 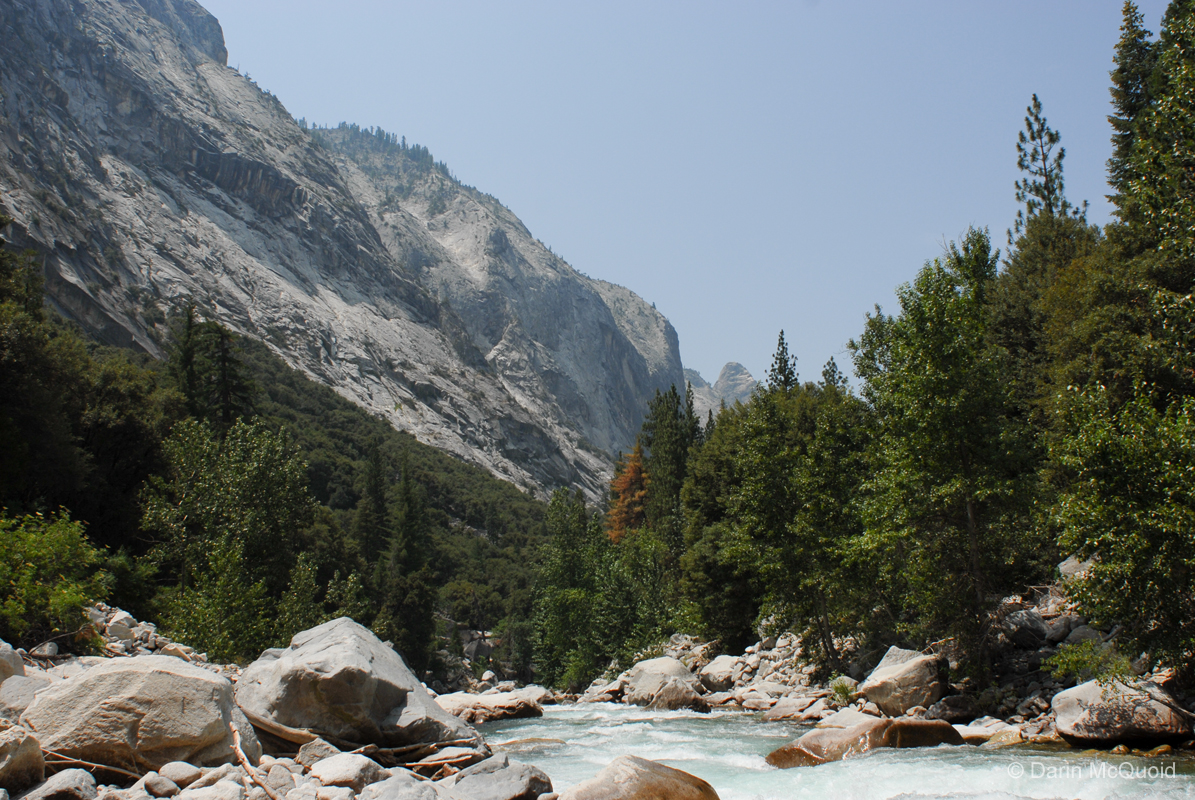 There had been forest fires raging for the last several weeks at lower elevations, and as we came into Tehipite Valley the sky was grayed out from the smoke, so I didn’t take any pictures during our quick lunch break. 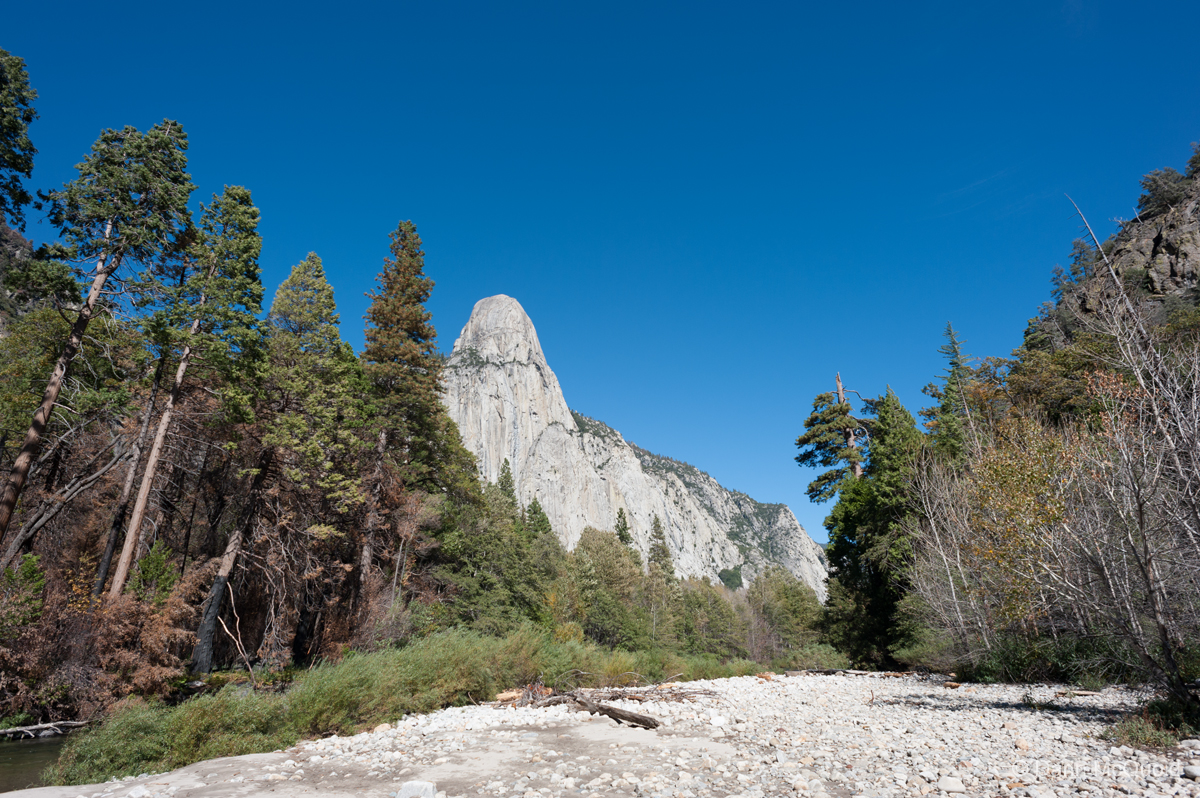 Tehipite Valley is a brief respite from the larger rapids. If you have the time it makes a lovely early in the day camp or layover. Once the river winds out of the valley, it’s on again for the Bottom Nine.


Eric Seymour running an early rapid in the Bottom Nine. 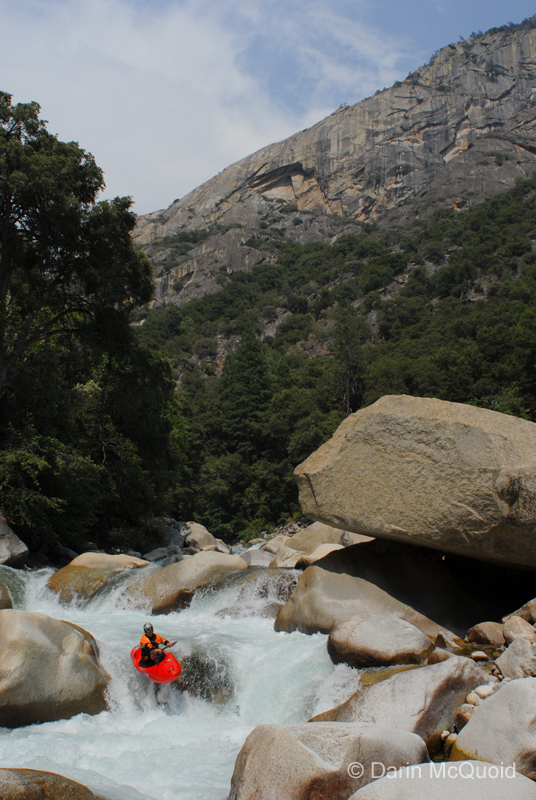 The Bottom Nine has a reputation for dishing out trouble to tired kayakers. It’s filled with big boulder gardens full of hungry holes and the occasional portage, all non-stop for nine miles. Ben was on it for scouting and giving us the beta, so I rarely got out of my boat except to portage or get a few shots. 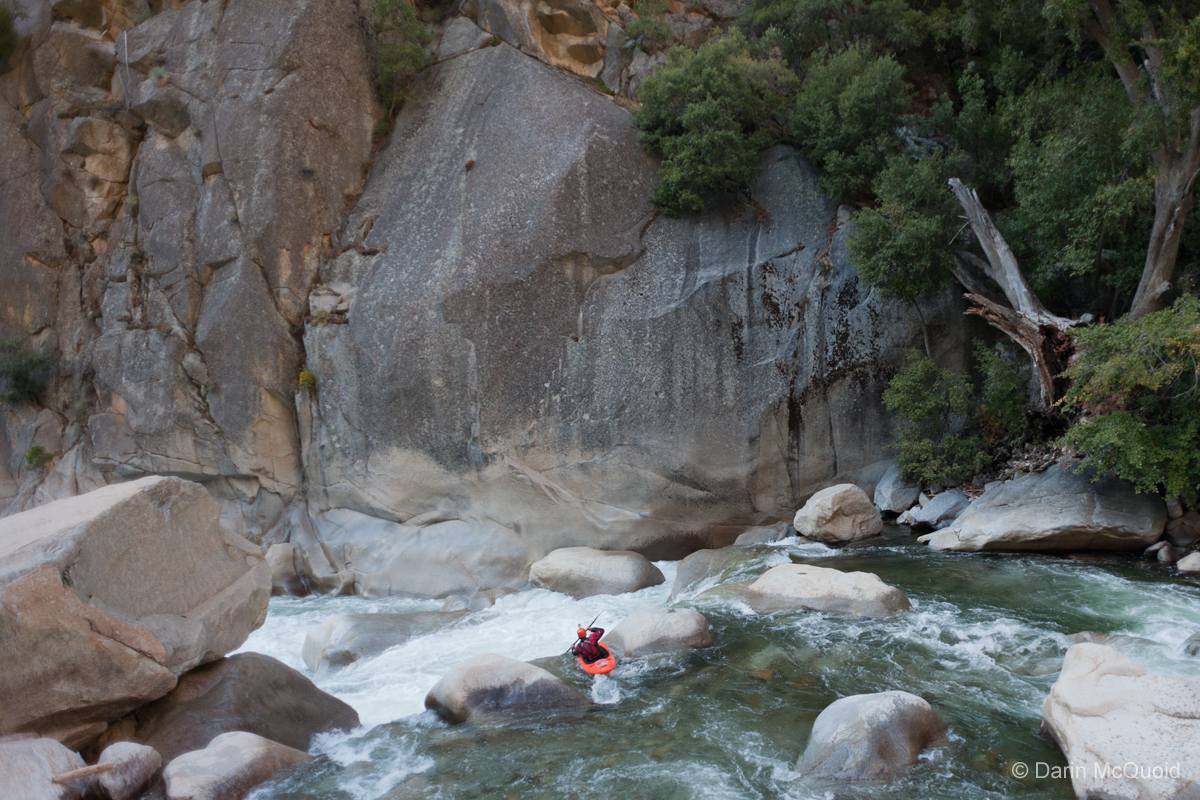 Most of the time I walk this one, apparently Ben Stookesberry does not. 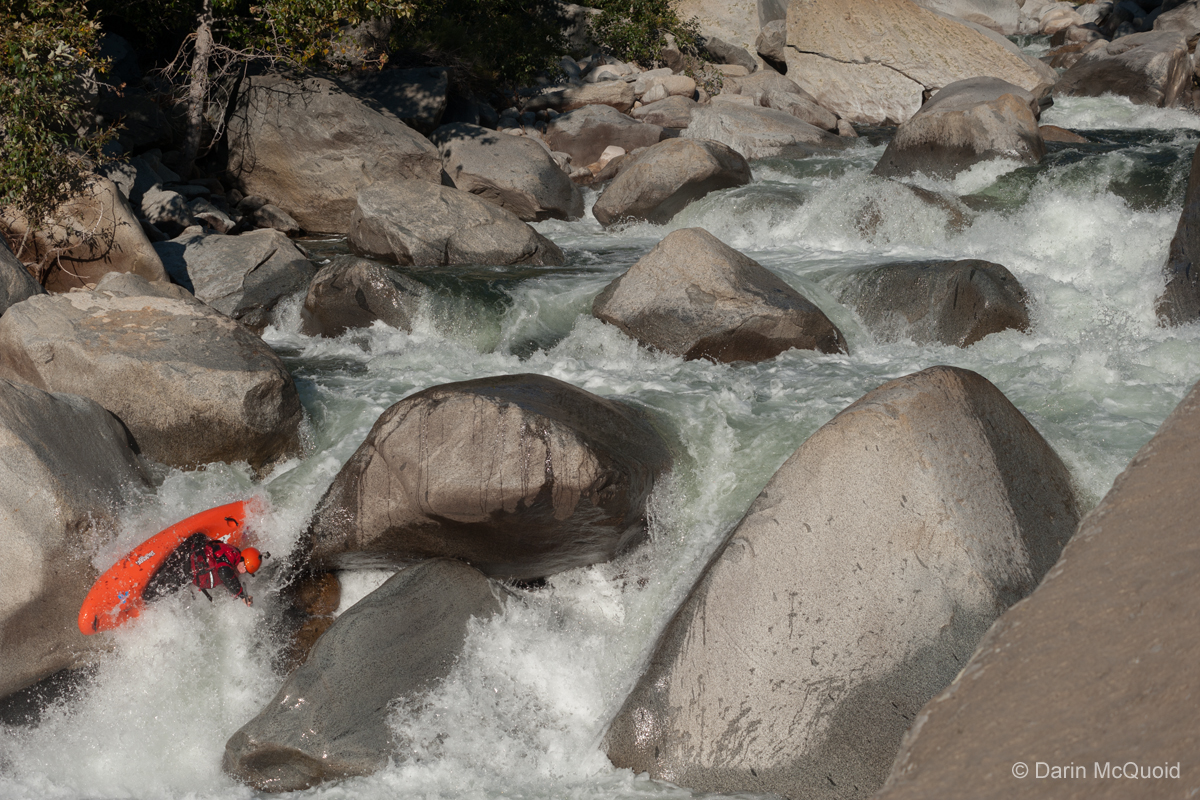 Forrest Noble bombed away boat scouting down some big drops too 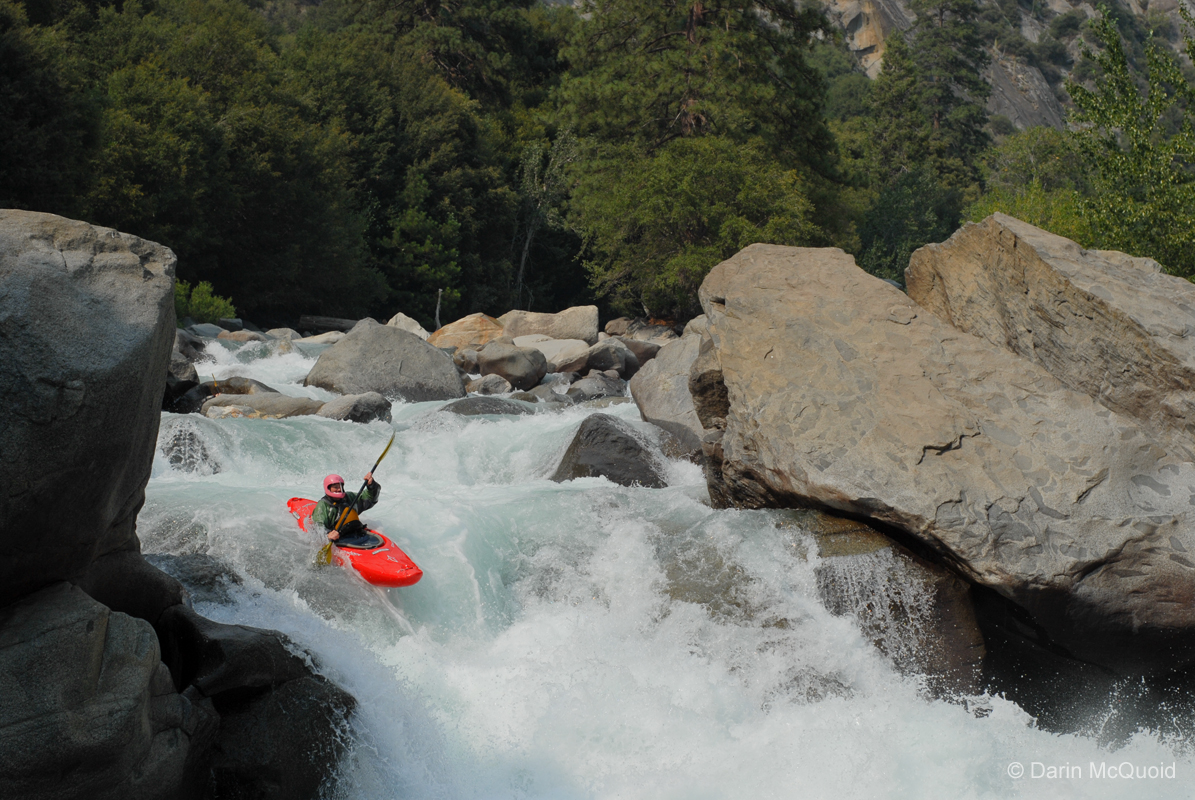 Bottom Nine: When in doubt portage right. Big boof after a seal launch. 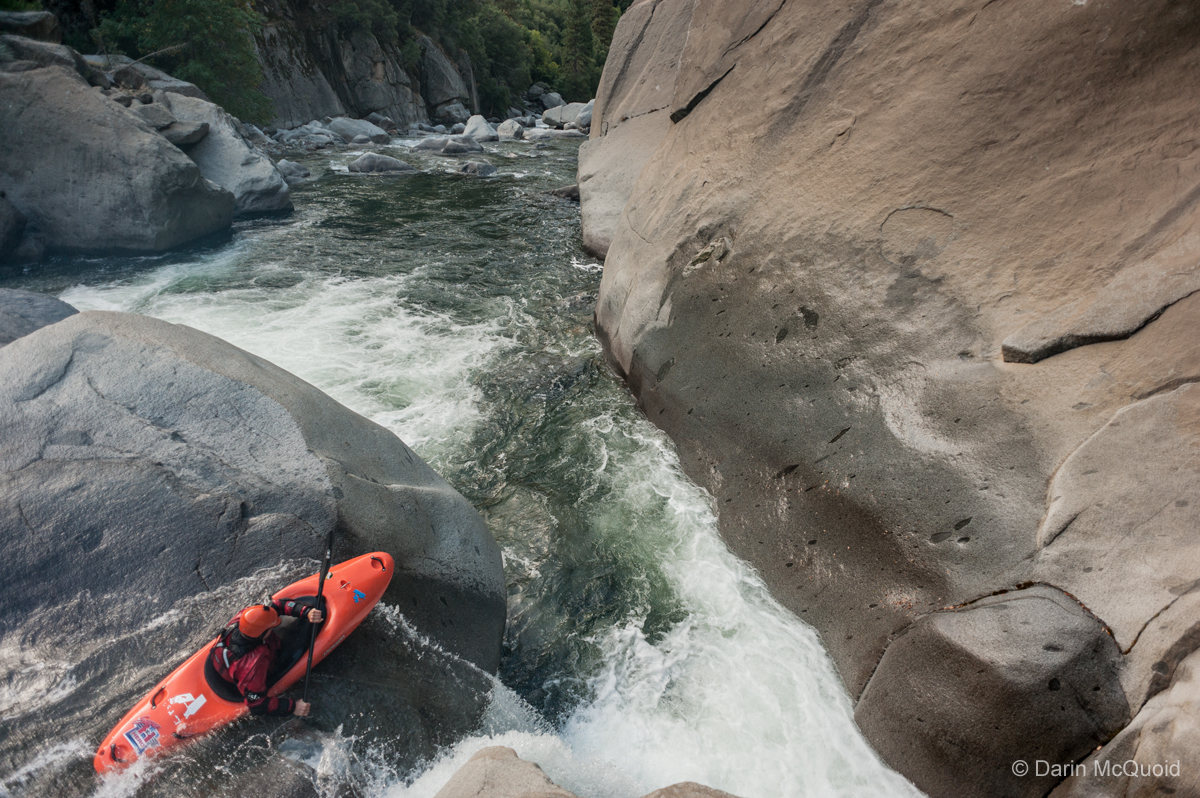 Halfway through, we camped out looking forward to completing the Bottom Nine and pushing through the Garlic Falls runs (once considered it a two day run!). 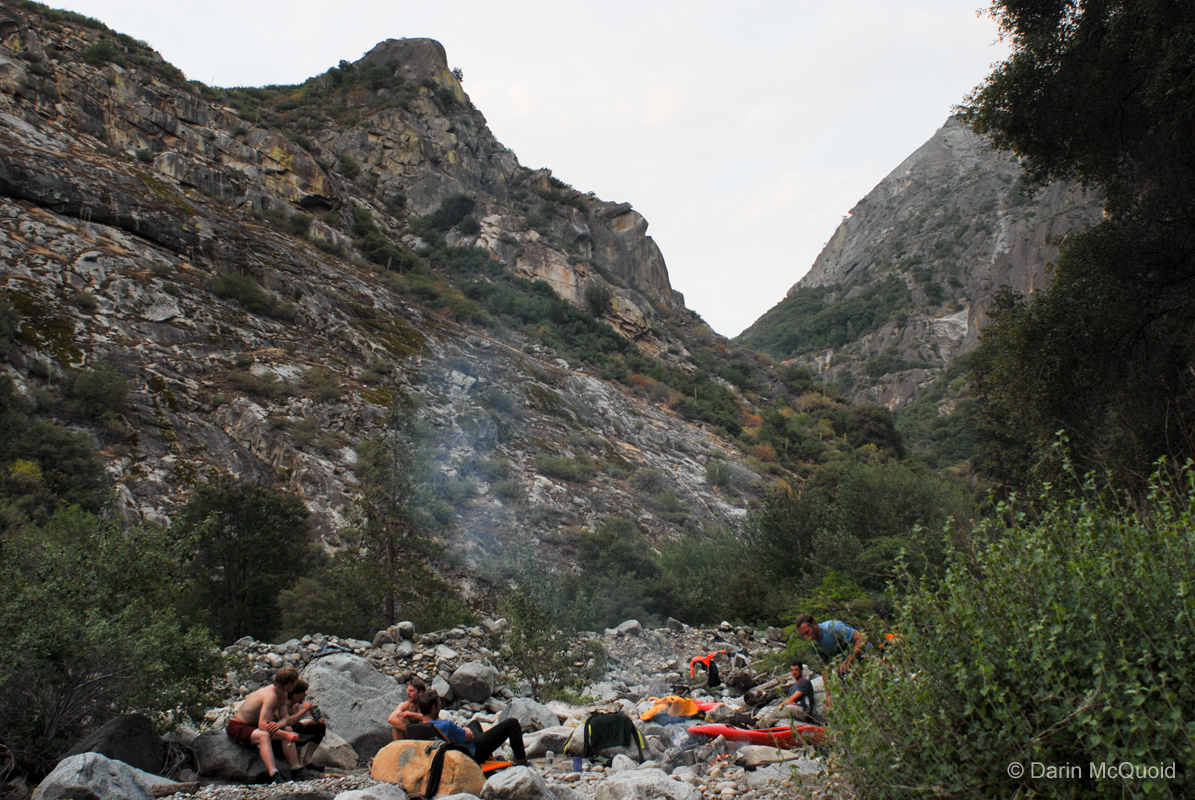 We finally got up earlier on our fifth day, knowing it was a long ways to the take-out. From camp it was just like the day before, gloriously fun boulder gardens, one after the other with a few portages thrown in. 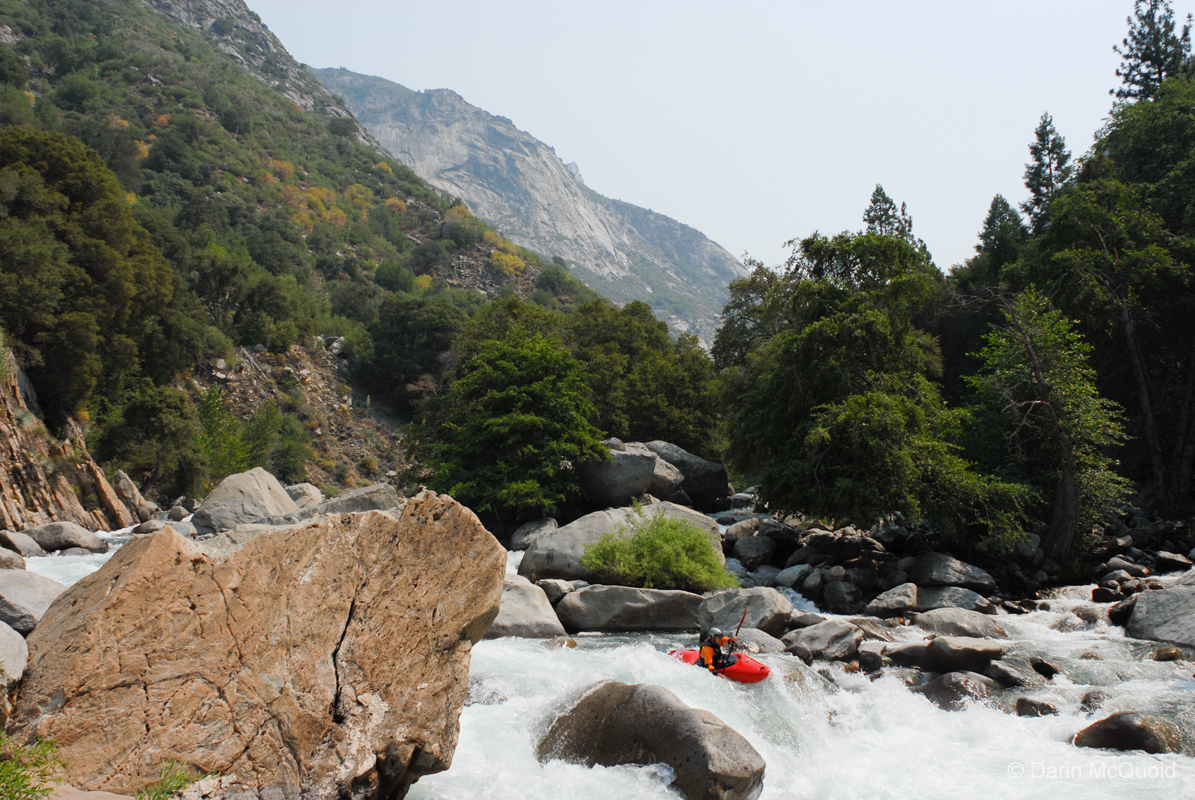 Rolf Kelly and Eric Seymour with the South Fork confluence in the background. 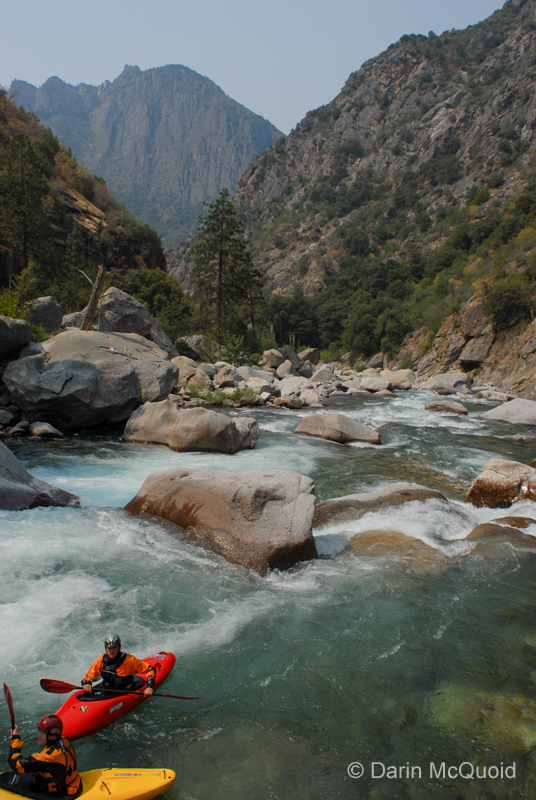 This section of river really isn’t that picturesque, and it demands a focus on downstream progress and safety to come out the other side. At one point we thought the South Fork confluence was just around the corner, but it didn’t take long to find out we had another mile of significant rapids to push through. We were all glad to see the confluence, where the Yucca Point trail meets the river. Many groups opt to hike a steep three miles out here, but we had chosen to push through the semi-classic eight mile Garlic Falls run.

Pushing into Garlic Falls our fatigue group started to show, and as we spread out communication started to fail. After a few warm up big water rapids, the full volume of the river narrows into a twenty foot wide slot that drops ten to fifteen feet into a sticky hole that is commonly run with a hard drive to the right followed by a late boof.


Most of us drifted in with no speed to a delayed boof down the middle, resulting in some carnage. 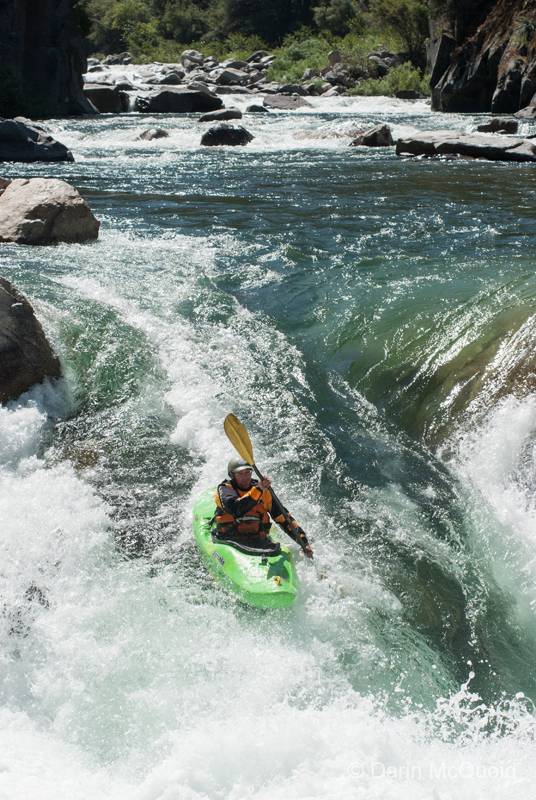 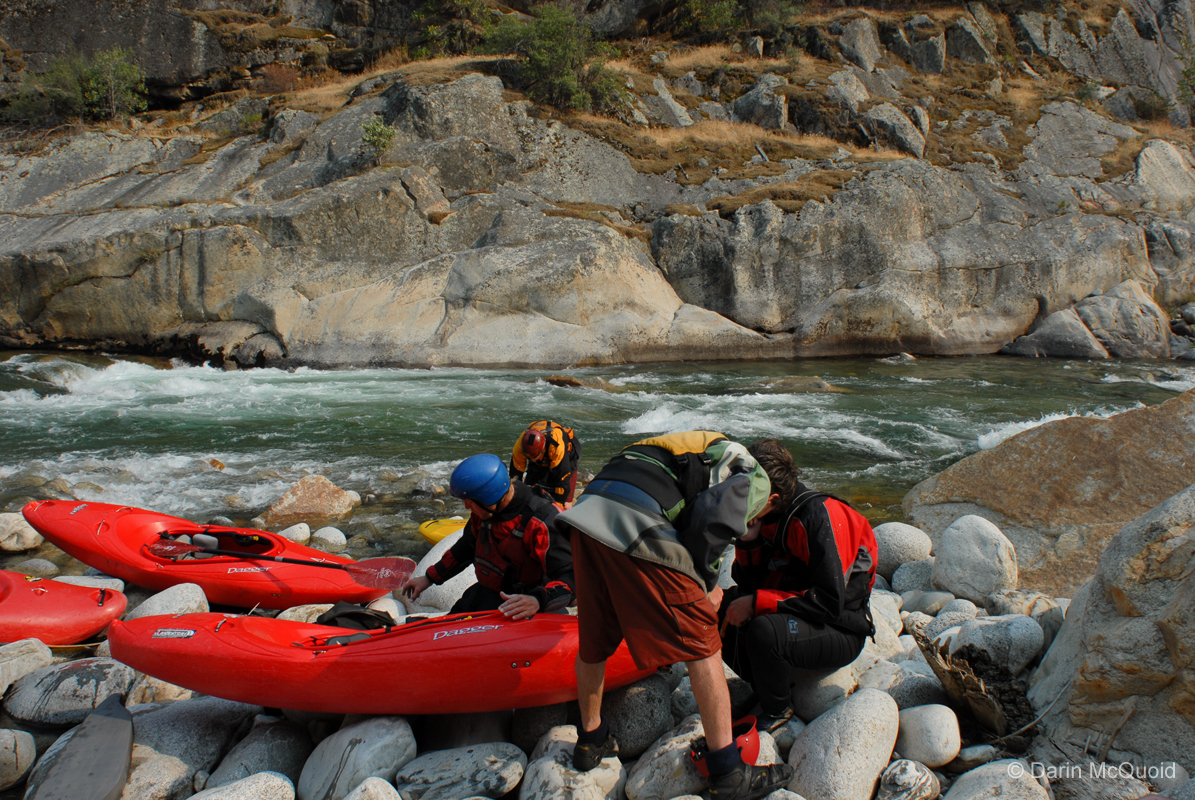 The river gradually eased as we pushed downstream, eventually turning into a nice II-III as the sun dropped over the horizon. Splitting off from the rest of the group Ben, Forrest and I pushed downstream just in time to catch Chris Korbulic on his way out. Walking up from the water, my beat up truck was a welcome sight. Consummating a nearly perfect spring of California paddling, the Middle Kings stands above all other runs. For the first time in my life I thought “I am ready for a long break from kayaking”.  I've thought the same every time every time I've finished the Middle Kings. It's a run to satiate the whitewater appetite.

The Middle Kings is best done with the gauge around 1,300 when you start hiking. 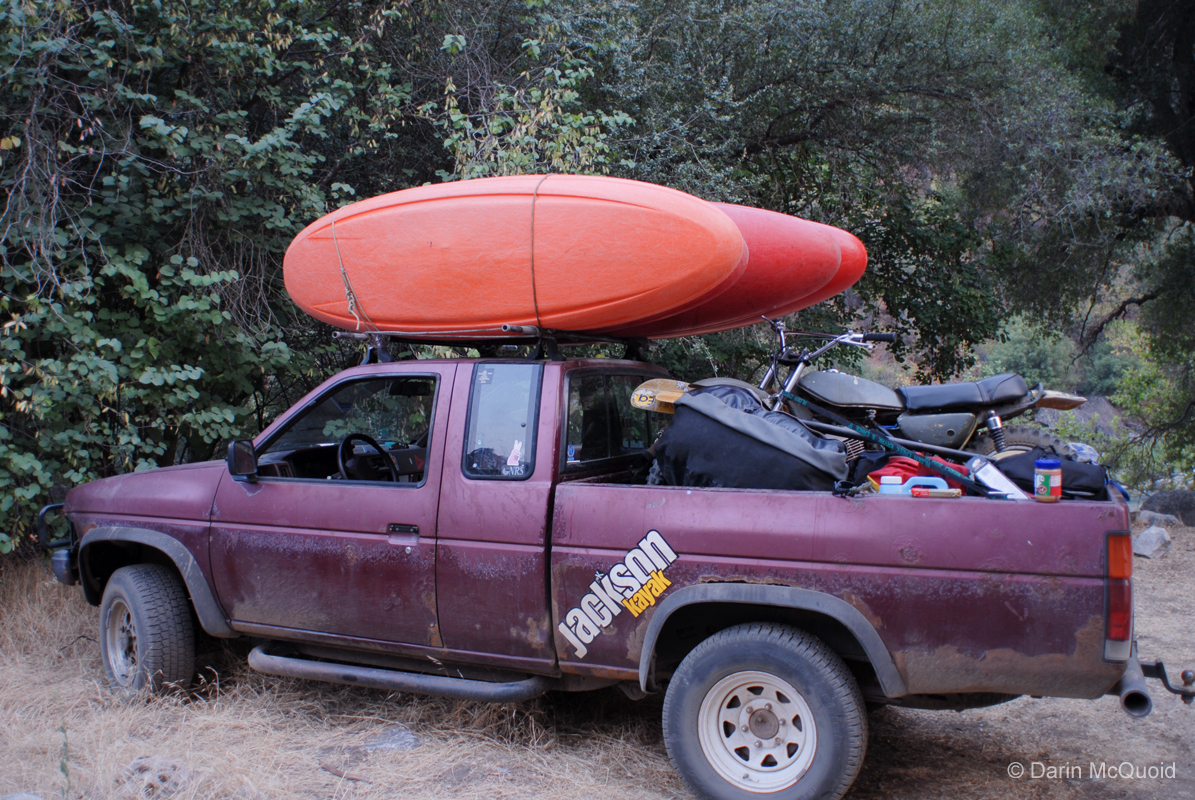