I was disappointed not to meet up with Jonas Grünwald while in Corsica. Having a real job had him locked down during our visit, but a few weeks later he inquired about the California season. In 2013 we are in a serious drought. On the other hand Oregon and Washington are doing ok, so he books a ticket with a PNW trip as our backup plan. It's a good thing we have a backup plan. There is not much going in California, but we manage to squeeze in a fun run down Bald Rock Canyon of the Feather River, something that was too high for two months during Jonas's previous visit. From Bald Rock we head north, making a stop at Burnt Ranch Gorge, the Kokatat factory in Arcata and the Smith River on the border before making the final push northward.


Redwoods outside Crescent City mandate a quick break on the drive. 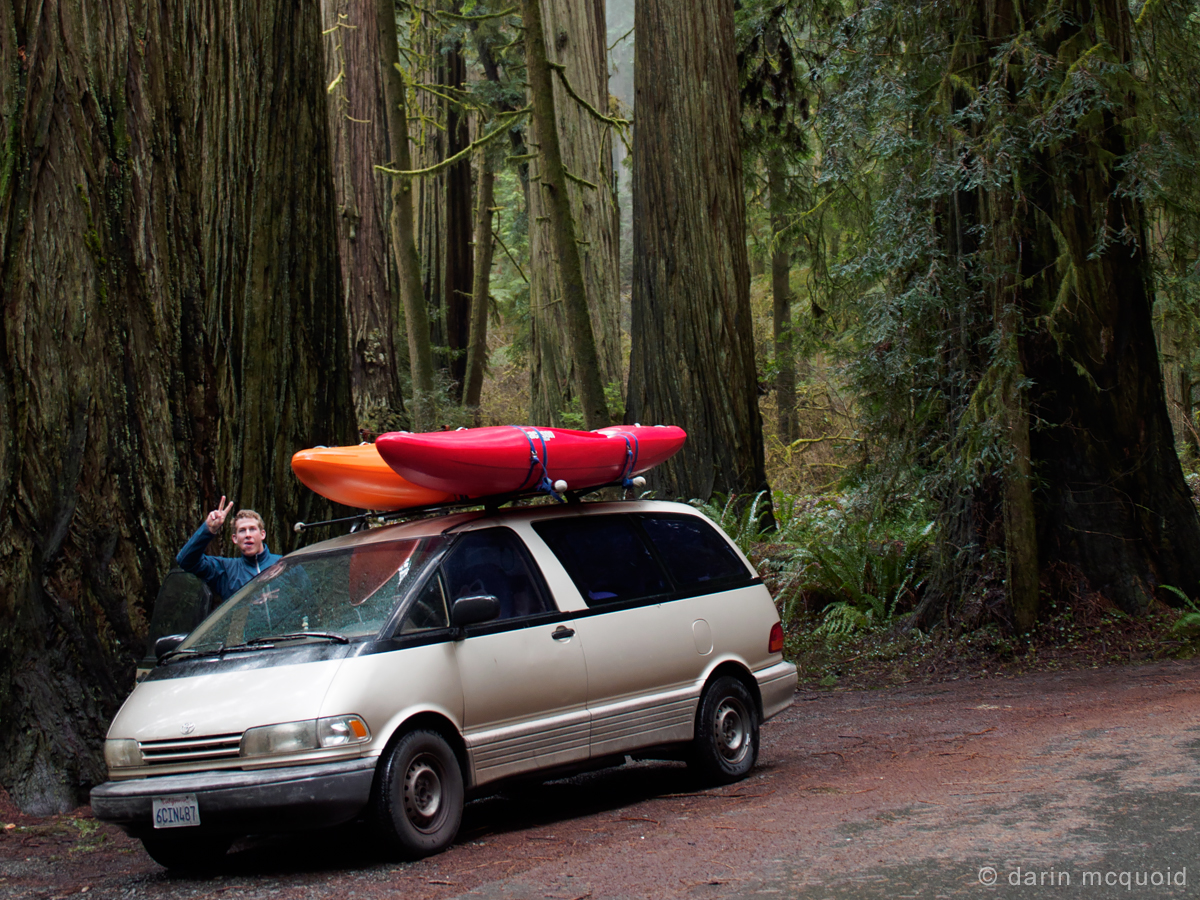 After the dryness of central California it's always an amazing sight. 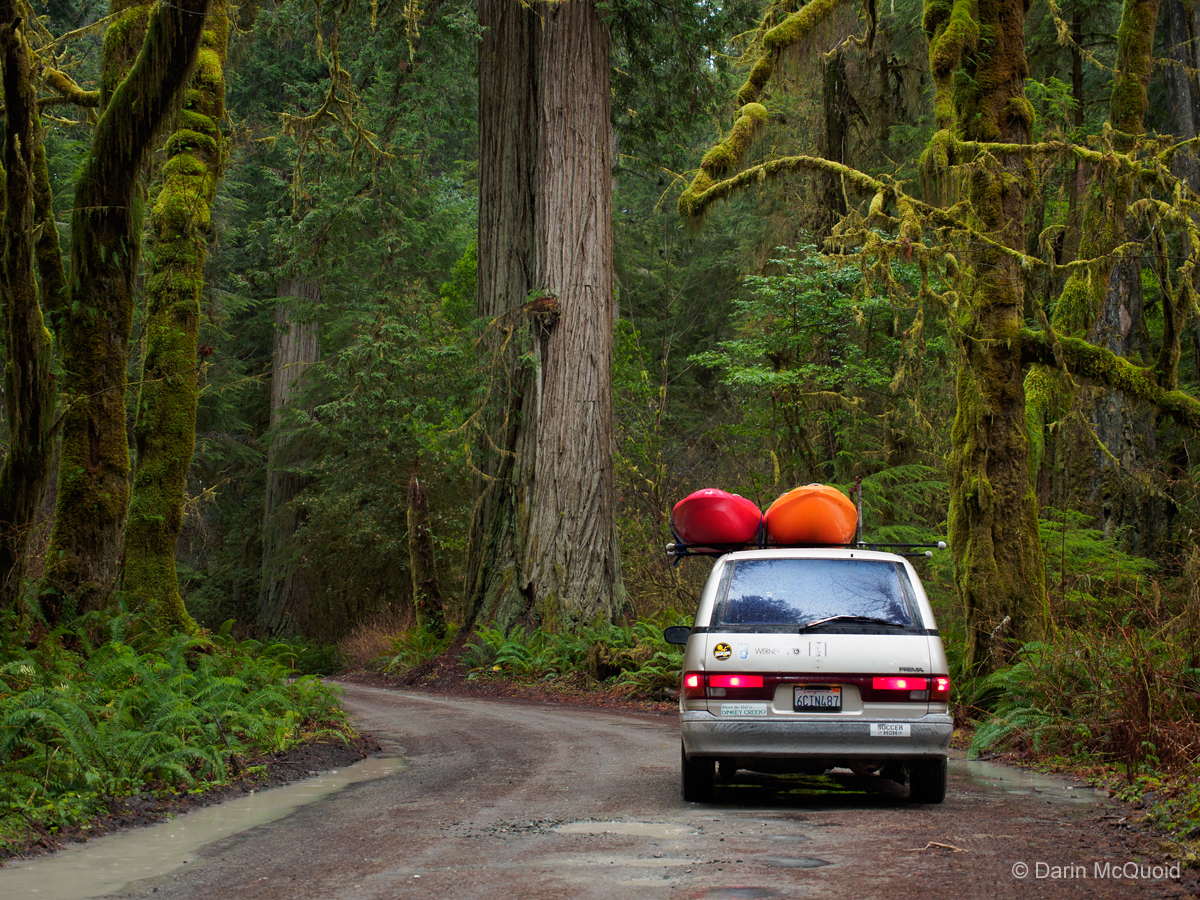 Somewhere in Southern Oregon we're able to utilize soccer mom's ability to transform into an RV and catch some sleep near Grave Creek. What to do is up for debate. We ponder Tokatee Falls, but have no way to gauge the flows and weather seems to be snowing higher up. Weighing our options and looking at flows we pull the trigger on the McKenzie River, I think it's at the right flow. Do either of us want to run massive waterfalls with minimal safety? That we're not sure of. 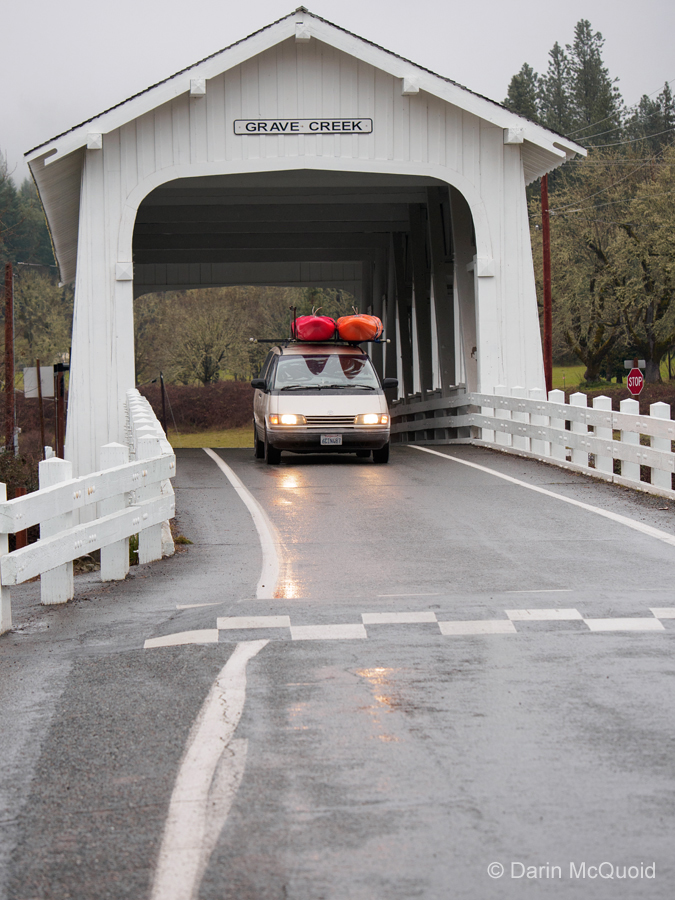 Arriving at Sahalie Falls we can't pull into the parking area - three feet of snow fill the parking lot. The start of March is an early time to be up here. Sahalie was first run in 1998 by Shannon Carroll, who set the waterfall world record at the time. It was a bold move as it's no simple waterfall. The lead-in rapid is full of logs and an eddy at the lip is the only viable spot to put-in. Without the logs the line would still be the same; from the eddy you must ferry out over a curling wave and turn the boat downstream while on the lip of the near eight foot plunge. The left side of the landing appears to be shallow, and if that's not enough the downstream rapid is class V with logs across it. 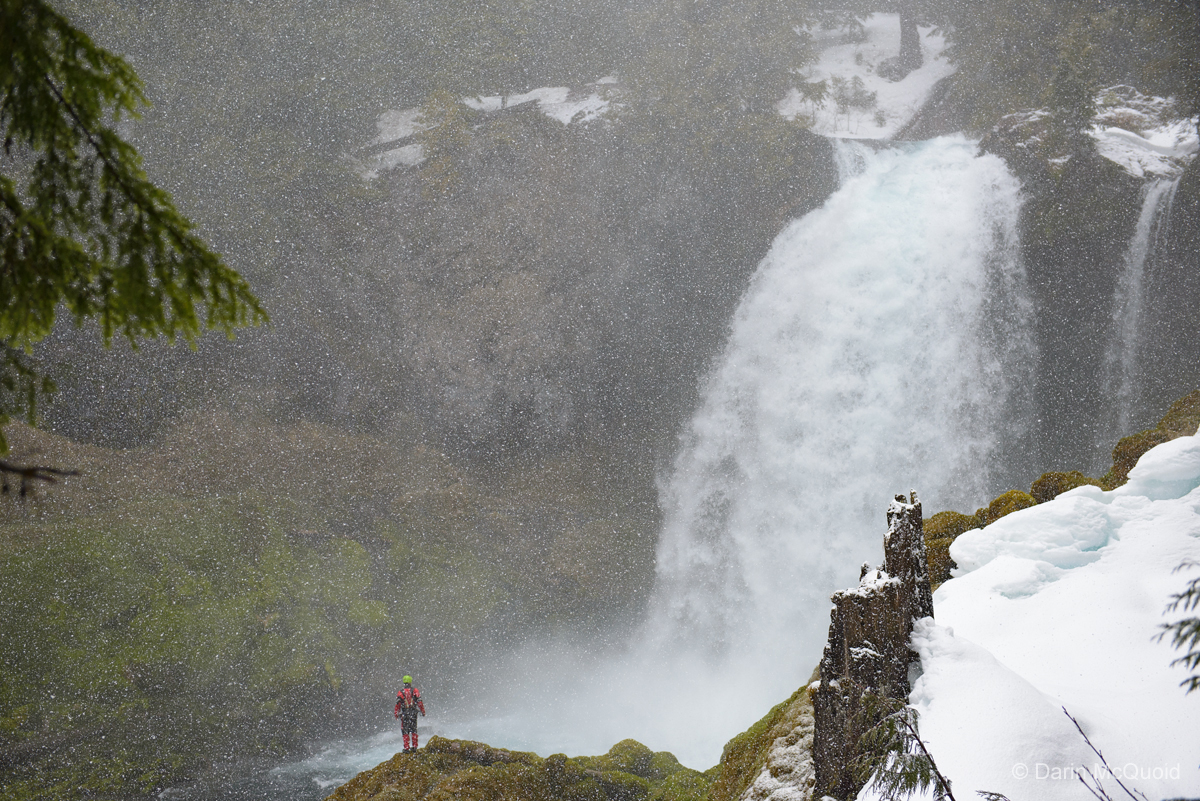 With just two of us the safety options are limited, and photography has to make the sacrifice. Jonas decides he'll run it while I set safety above the rapid. Hopefully nothing will go too wrong. A few tourists stop by and are kind enough to hold our extra rope. It doesn't take long for Jonas to appear at the lip, give a thumbs up and hop in his kayak. A brief moment later and he comes over Sahalie with what appears to be a good line. As he plunges in the pool I run upstream to get a better angle on safety and he quick comes around the corner - sans kayak.


Jonas Grünwald with a nice line in tough weather. 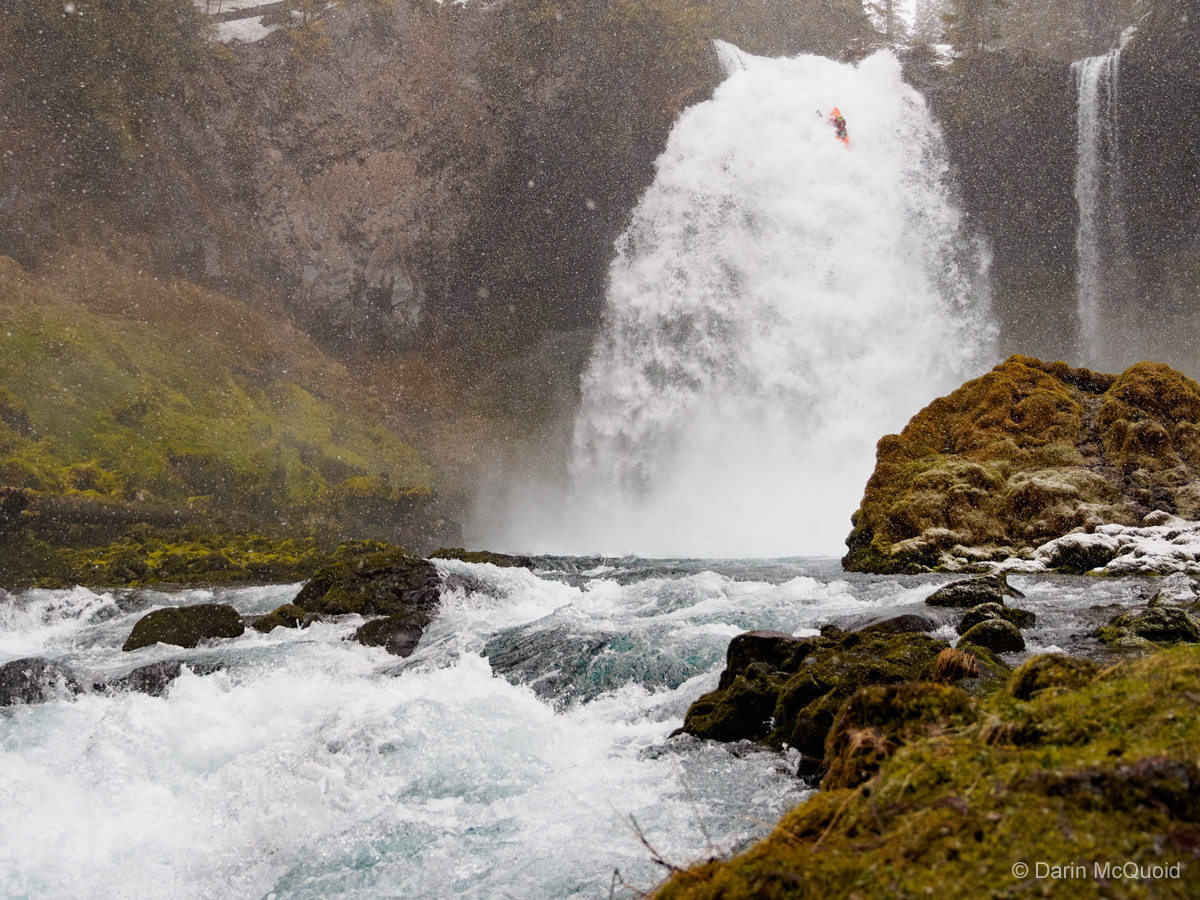 We're not sure what happened to the kayak. He was slightly over vertical on entry and separated from the kayak on impact. The McKenzie flows for a half mile below Sahalie, going over Koosah falls and ending in Carmen Reservoir. We wait some time at Sahalie but nothing shows up. As darkness approaches we head down to Carmen Reservoir to spend the night and look for the kayak in the early morning. A heavy frost greets us but quickly melts off as the sun rises to warm the day.

Breakfast is made by Carmen Reservoir and we spend the morning scouring the river and reservoir looking for the missing kayak but to no avail. 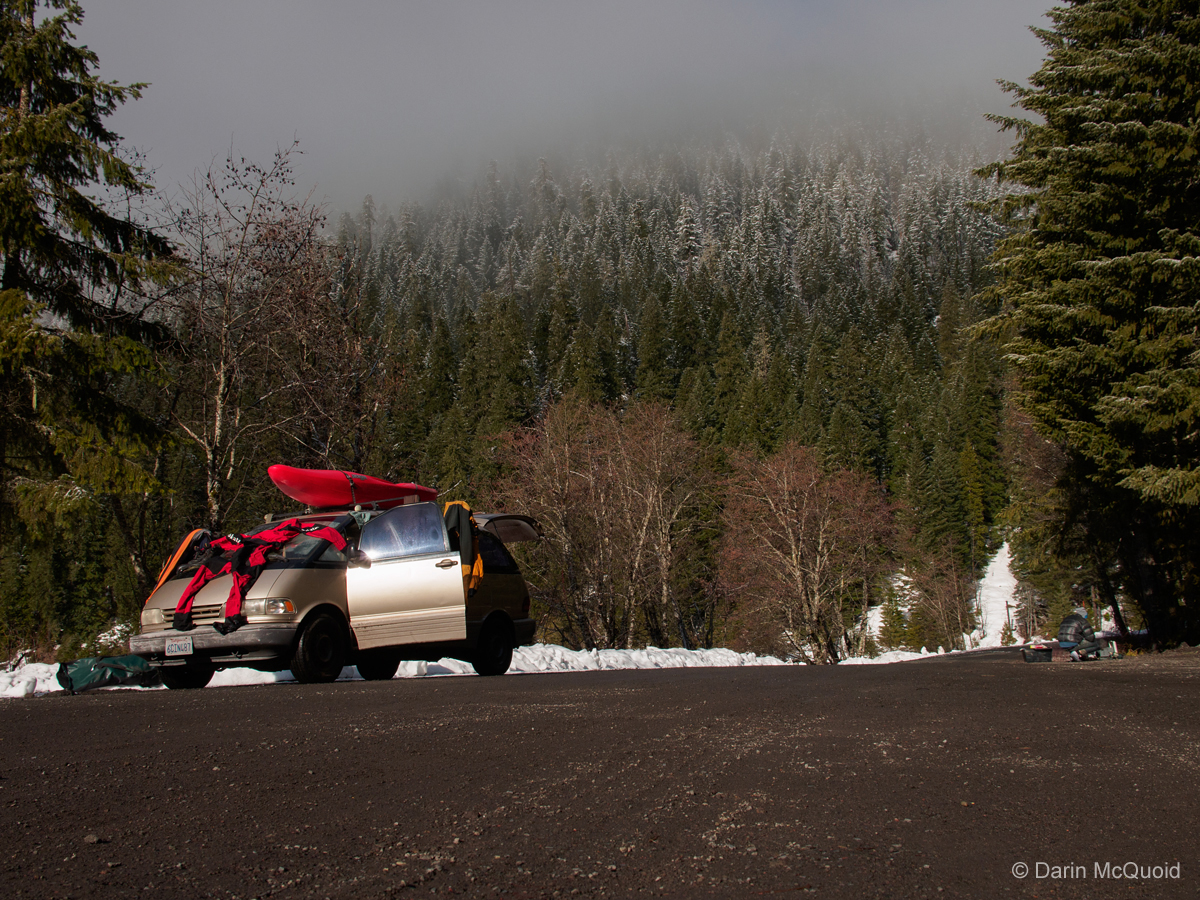 We discuss our options and as we're here Jonas decides he is game for running Koosah too. As his boat is still MIA he'll borrow mine for the plunge. Jonas hops in a short ways above Koosah, ferries across and flips. It takes a little time to adjust to a kayak, thankfully he has lots of confidence, rolls up and heads off Koosah Falls with great style.

Jonas Grünwald opens up to fly. 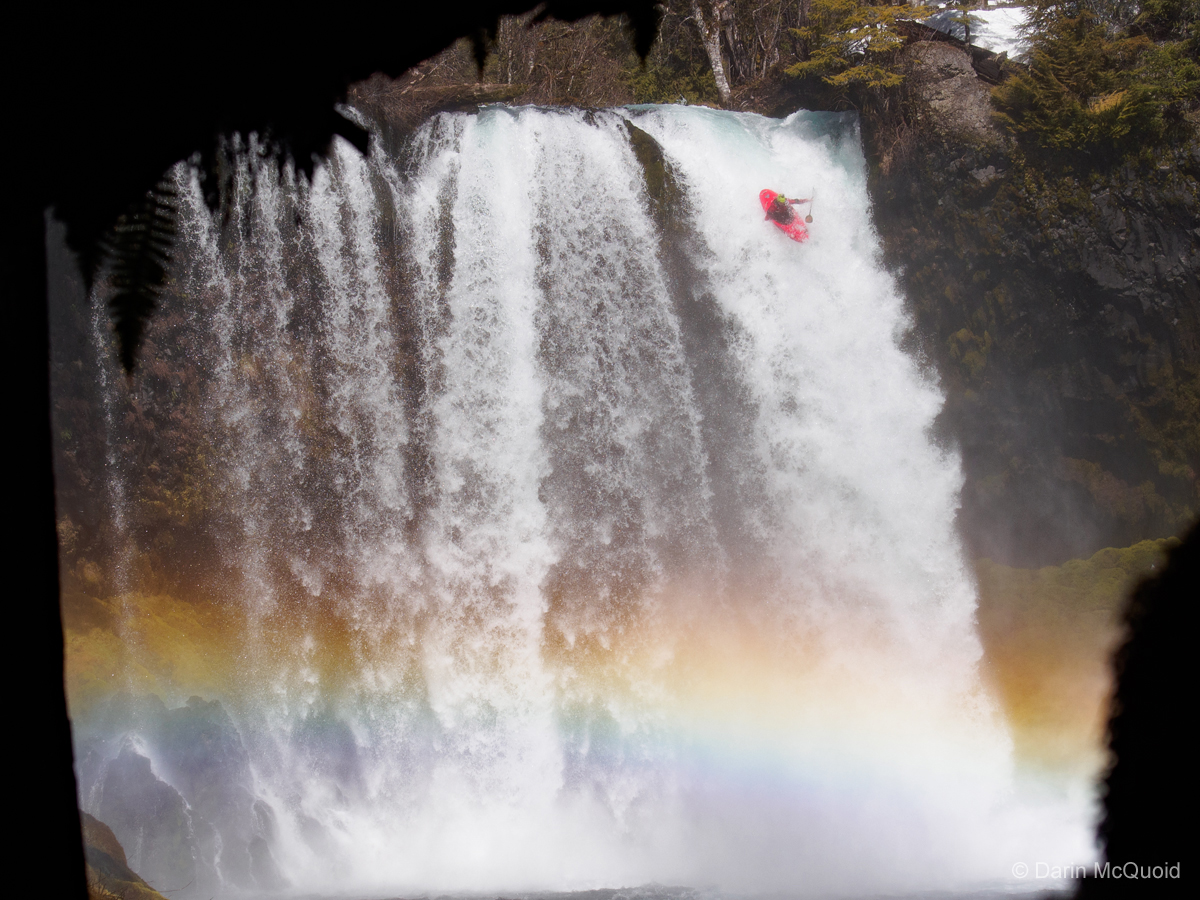 Setting safety above a log jam I have my cameras tied together with radio triggers. They capture the same moment from slightly different angles. 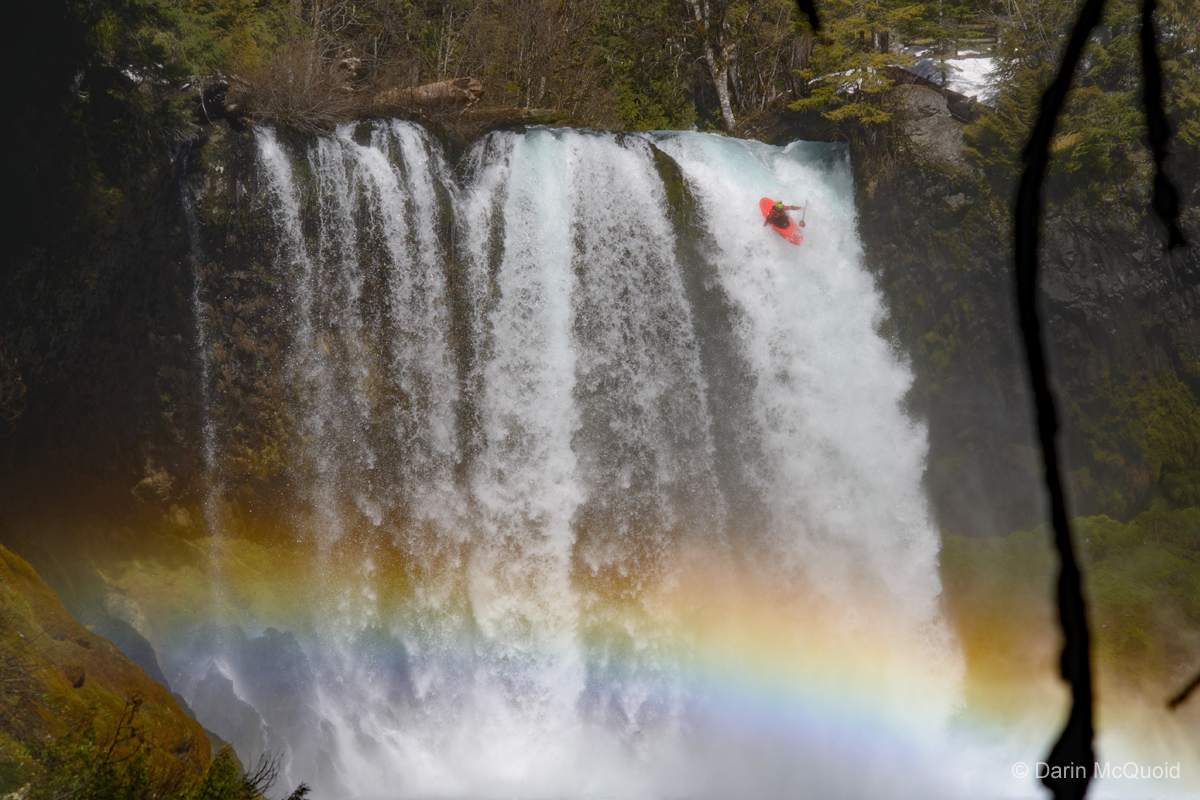 Now it's my turn to get nervous. I was here in 2012 and only ran Koosah, even though we had a lot more safety. It's hard to be by so much excitement without taking part in it. I deliberate a few minutes and then we head up to Sahalie. The weather turns sour and it starts raining. Standing at the lip one this is for sure, this is a big waterfall. As it's been said "...the hairs will stand up on the back of your neck." The move is fast out of the eddy and there is a brief moment to appreciate the height as I turn my kayak downstream and tuck up half a second later. I prefer throwing my paddle off big waterfalls, but there is no choice of that here with a class V rapid downstream. Impact at the bottom is present but not terrible, I make a quick roll and notice the sides of my skirt have come up. One quick second to push it back on and it's time to paddle into the eddy, glad that one is over. 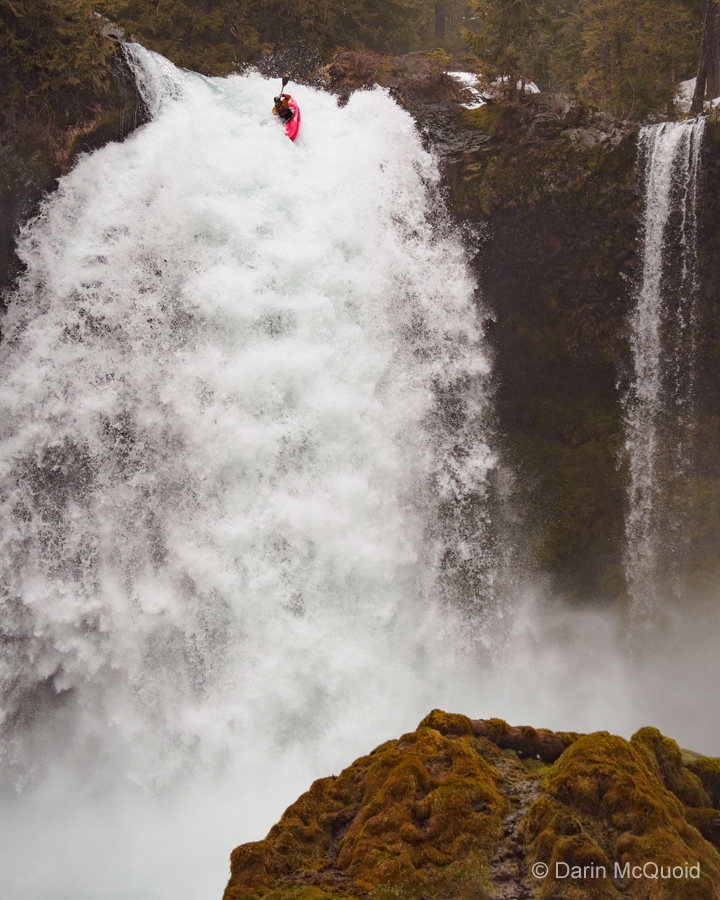 Park and huck is a strange thing. Only a few seconds of kayaking today but it's enough, we pack up, search for the lost kayak one more time and head to Hood River for some new sections of whitewater, and looking for a kayak to borrow.