The McKenzie certainly is one of the most beautiful rivers in the world, which is good because we spend a lot of time looking at it, trying to find kayak lost yesterday.


One last look at the McKenzie River. 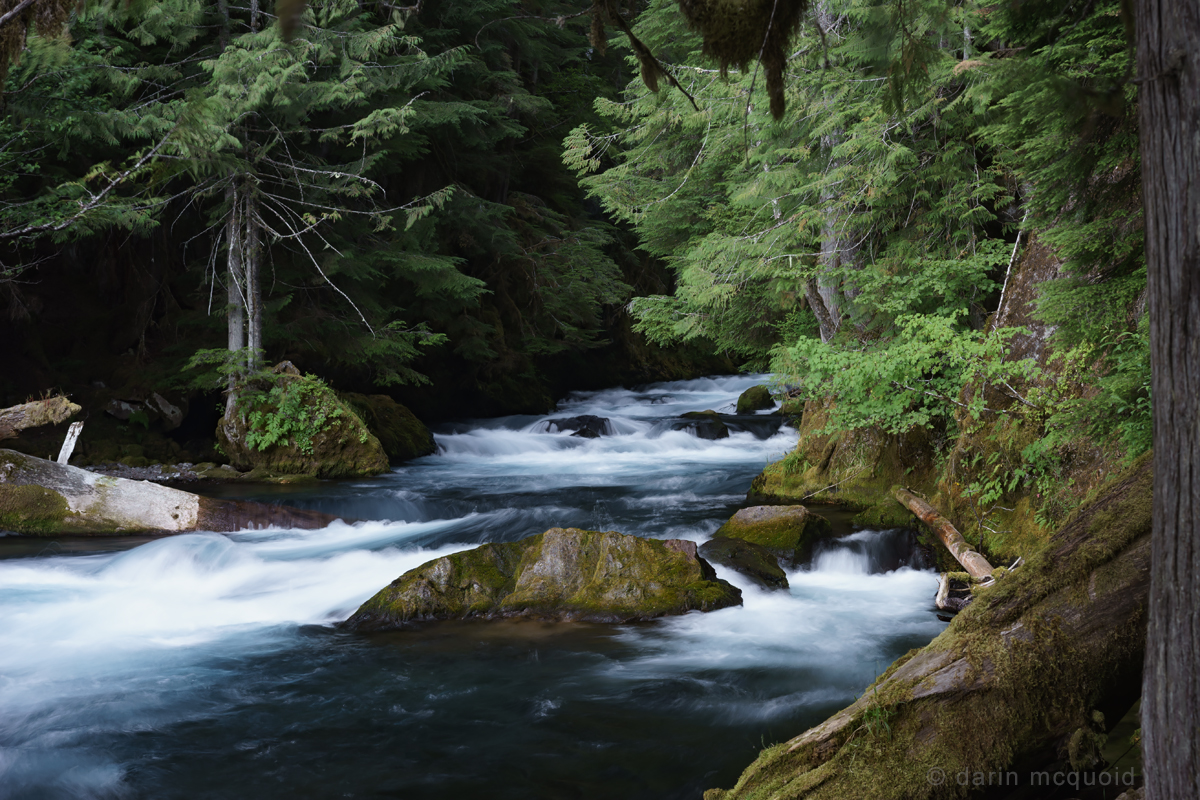 Jonas and I head north, two men and one kayak. A friend of friends, John Loehrer, is kind enough to invite us to sleep at his house in Portland. The hospitality of the kayaking world is truly incredible. Hearing of our lost kayak he is kind enough to loan us a Nomad 8.5. We rise early to make a quick pre-work run with John on the Clackamas before continuing up to the fabled Hood River region. Jonas had made a previous with his sights set on Metlako Falls of Eagle Creek. On that trip it was too low to run Metlako. We decided to pull off highway 84 and give flows a look. There is more water than on his previous trip, so we start organizing gear. Metlako has been run quite often these days, and although tall, it doesn't have much of of a move. Is there enough water for the impact at the bottom to be soft enough? 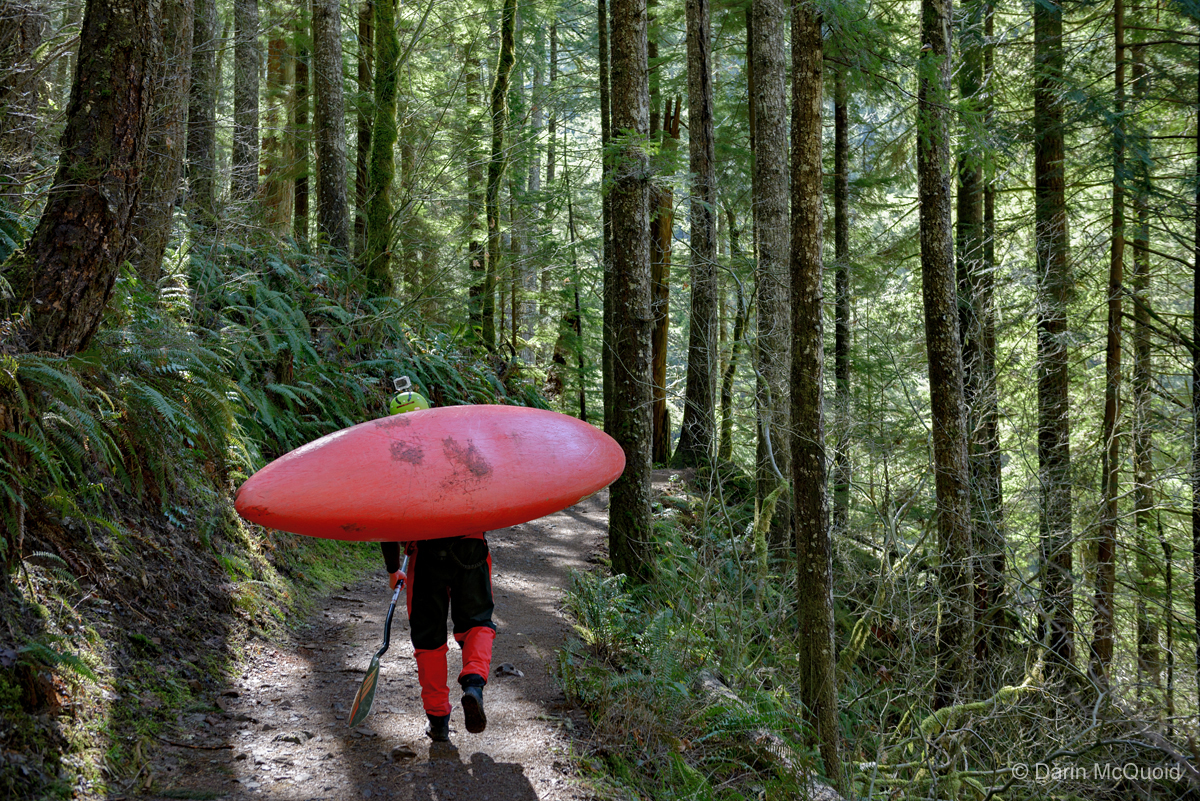 I decided to focus on photography and brought too much gear: a Nikon D600, 24-70 2.8, 70-150mm, Olympus E-M5 and 12-35mm 2.8 and 35-100mm 2.8 plus a full sized tripod and radio trigger. Initially we considering hiking all the way to the top, but after a few miles with all the camera gear on top of kayak and related gear, I'm tired. We take a break to look at Metlako from an overlook. Flows look on the low side but possible. This would be a great angle to shoot from, but with two people communication would be impossible.

Metlako Falls from the overlook. 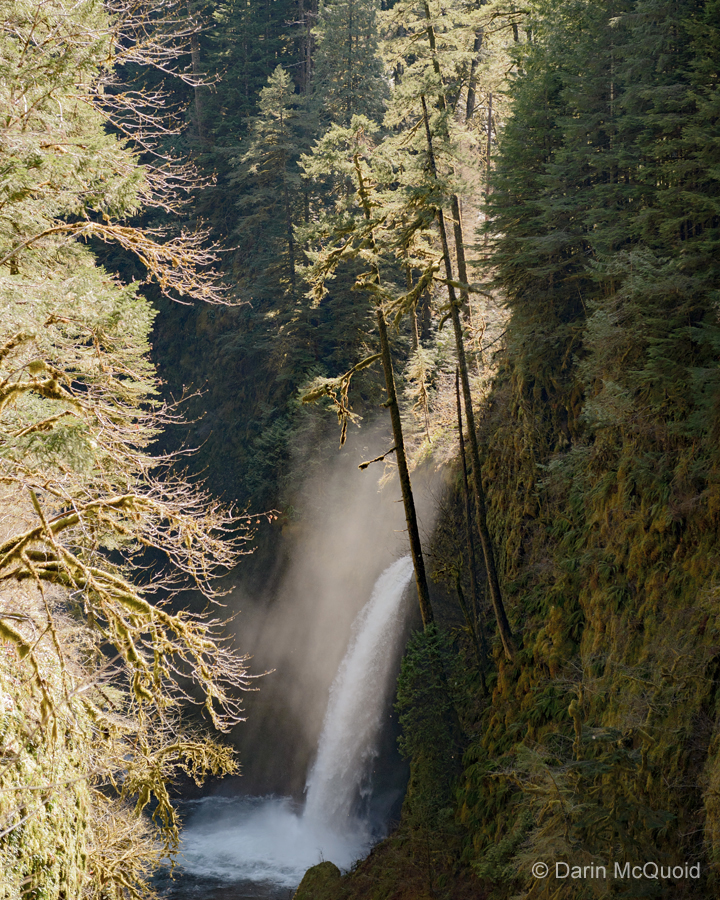 We continue up the trail, taking a few minutes to walk down to the lip of Metlako. Things look the same from here, low but probably possible. Certainly not ideal. Punchbowl falls isn't too much further up the trail so at the minimum we'll get to run it.


In the early spring the foliage isn't quite as lush and green, but that's all relative. Enthusiasm is infectious. 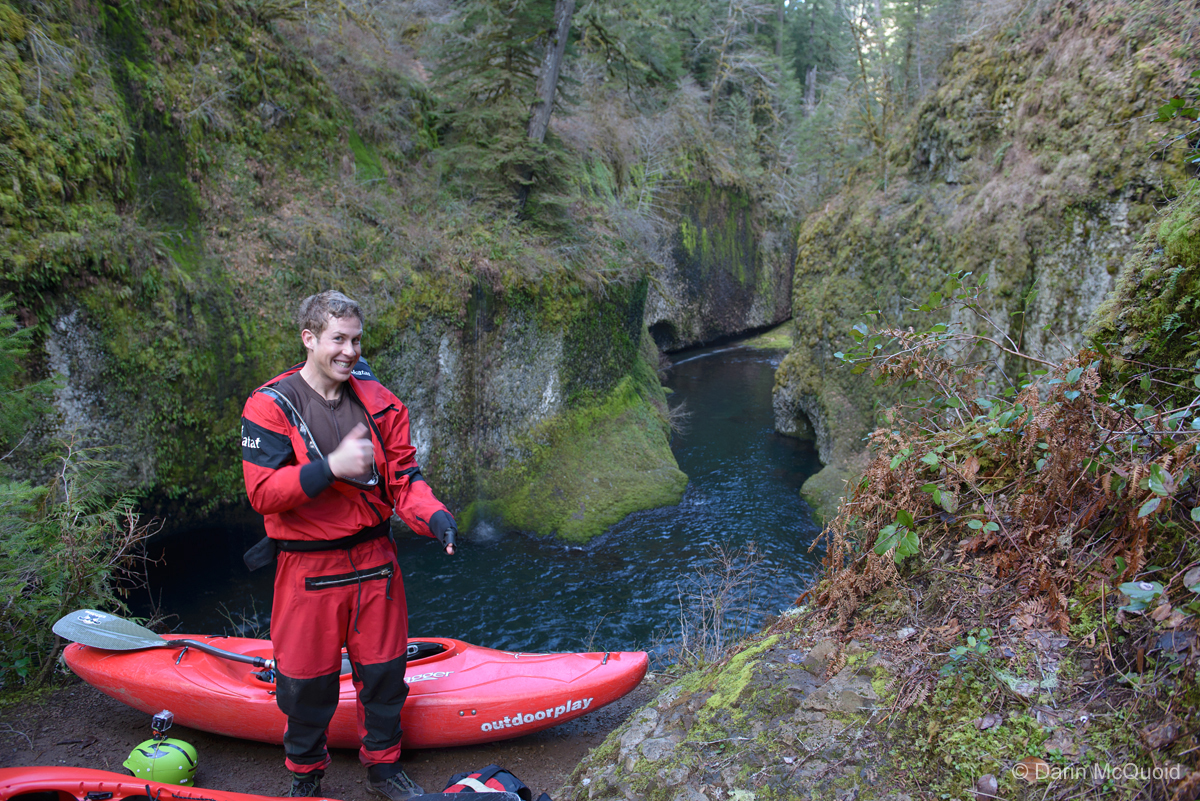 For some reason I decide that the angle will be better from below and go first. Jonas is kind enough to shoot from above and rope my camera down. The author lines up Punchbowl Falls. 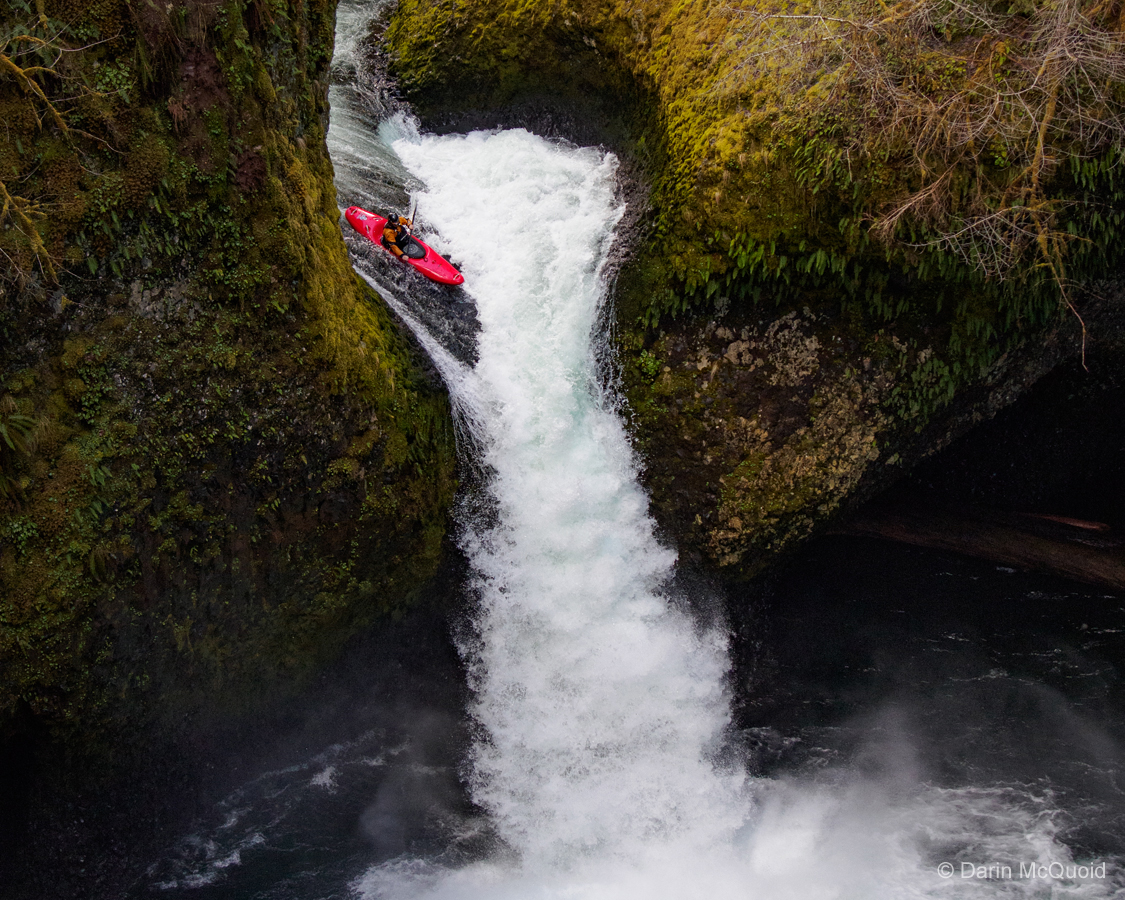 Below Punchbowl there isn't much room to move around, and the angles are limited. I should have seen this coming, but it's too late to change things now. I setup both cameras and the radio trigger, but don't have enough faith in it to place them too far apart.

Jonas Grünwald with a nice line off Punchbowl. 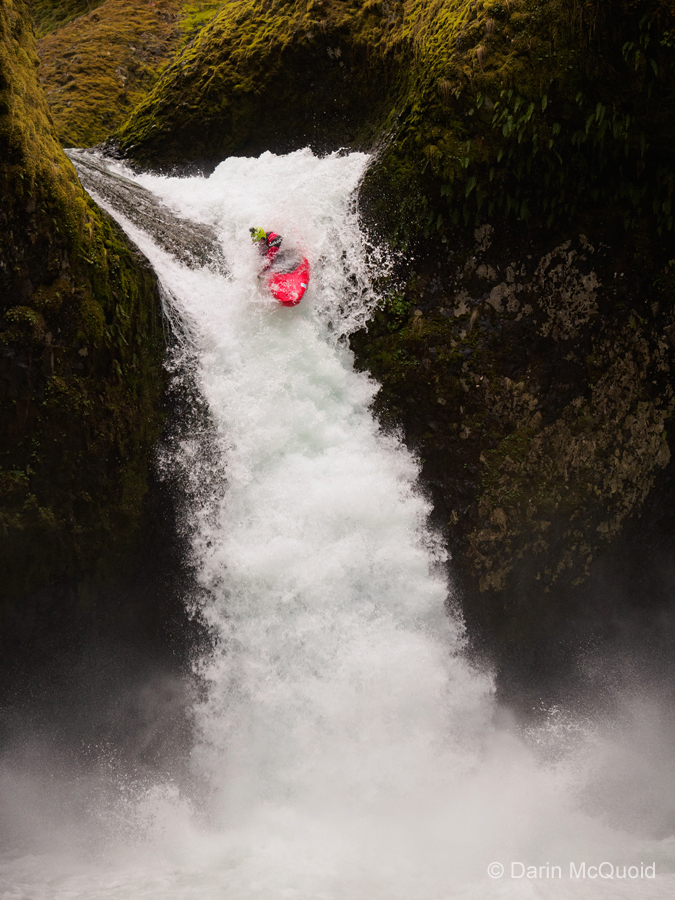 A wider view of the same. Typically this is a very green setting, but quite brown today due to the early season. 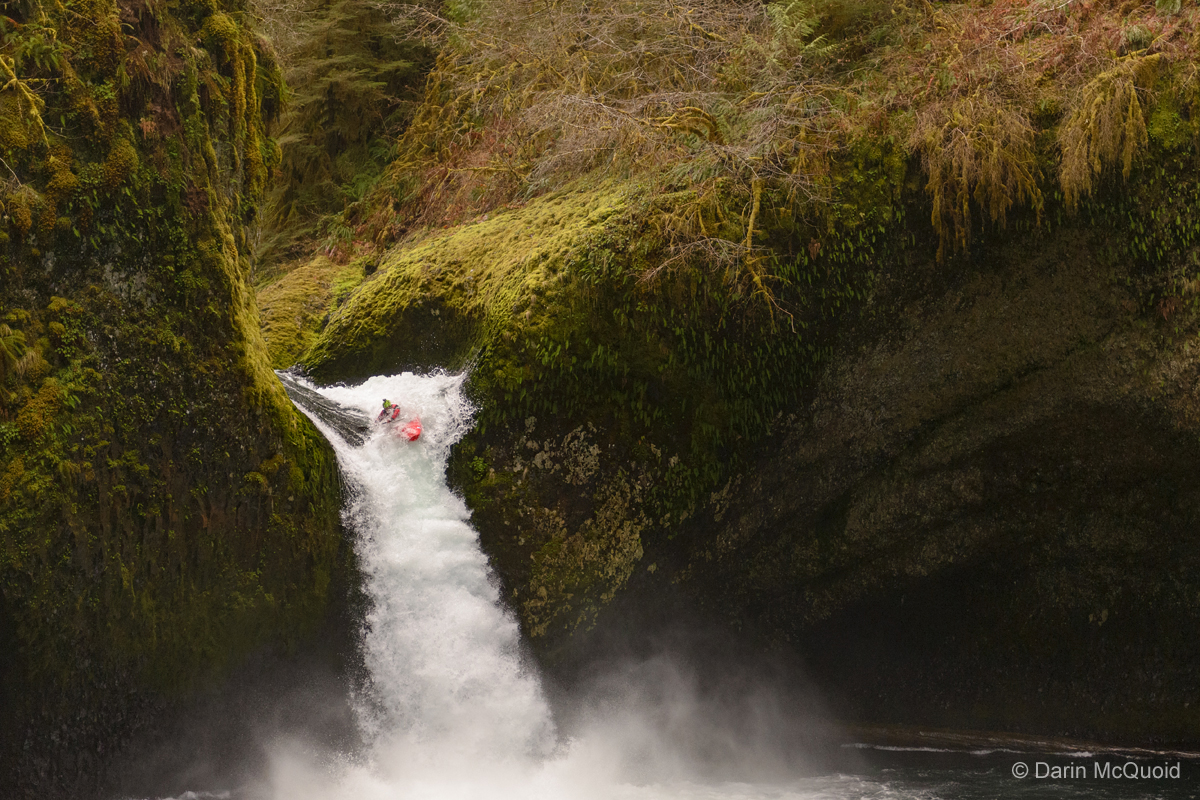 Below Punchbowl we cruise a short ways downstream and get out where the trail comes down to the river. We're a couple hundred yards above Metalko and will split here. I'll get the photography gear setup while Jonas scouts. We're still not sure if it's enough water but commit to at least taking a good look.


After a quick scout Jonas doing his last check above Metlako. 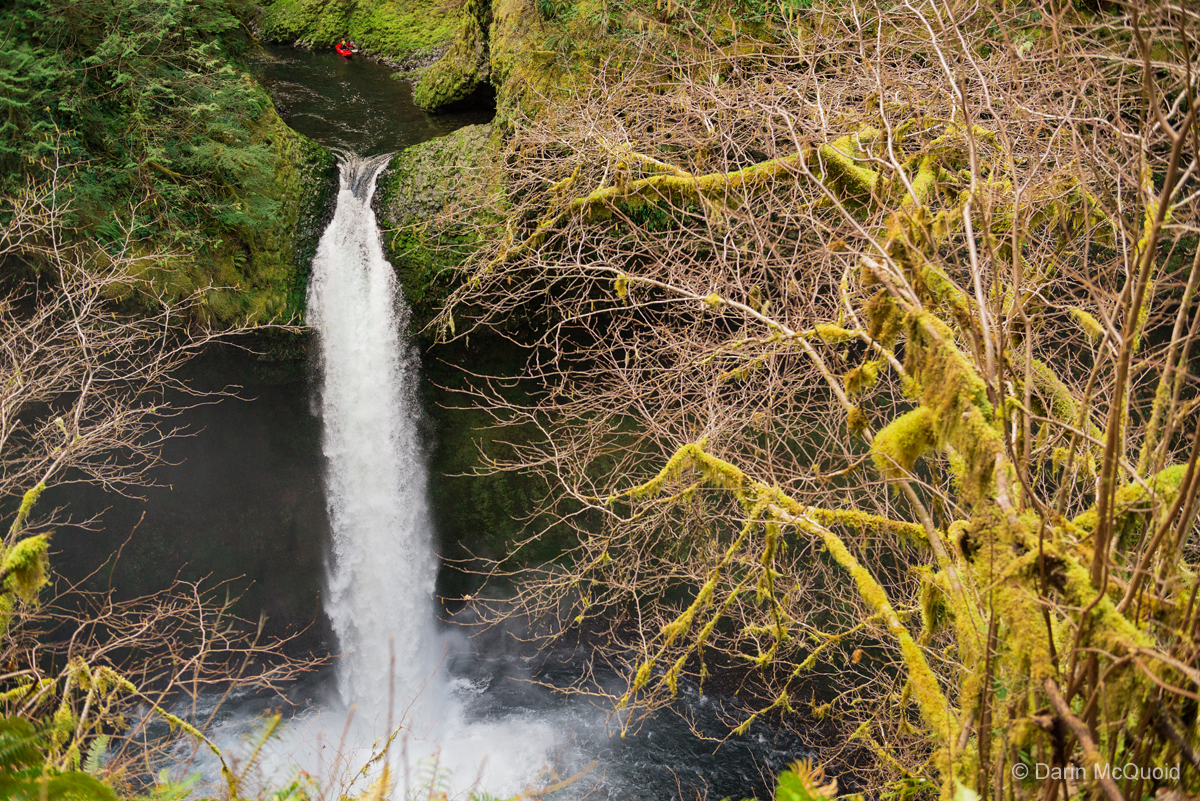 Another look from below, what a beautiful falls. Maybe next time. 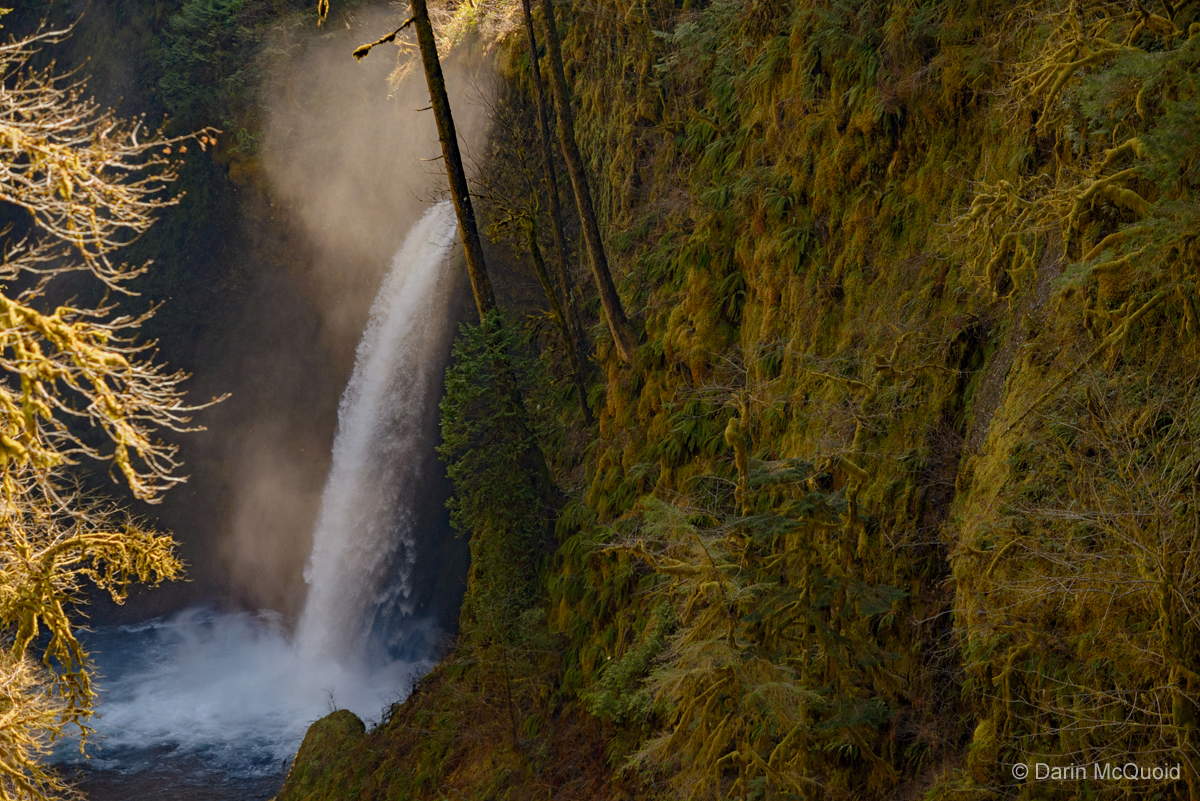 Jonas gives a thumbs up and heads over the lip, rolling over the ramp and tucking as he enters the freefall. 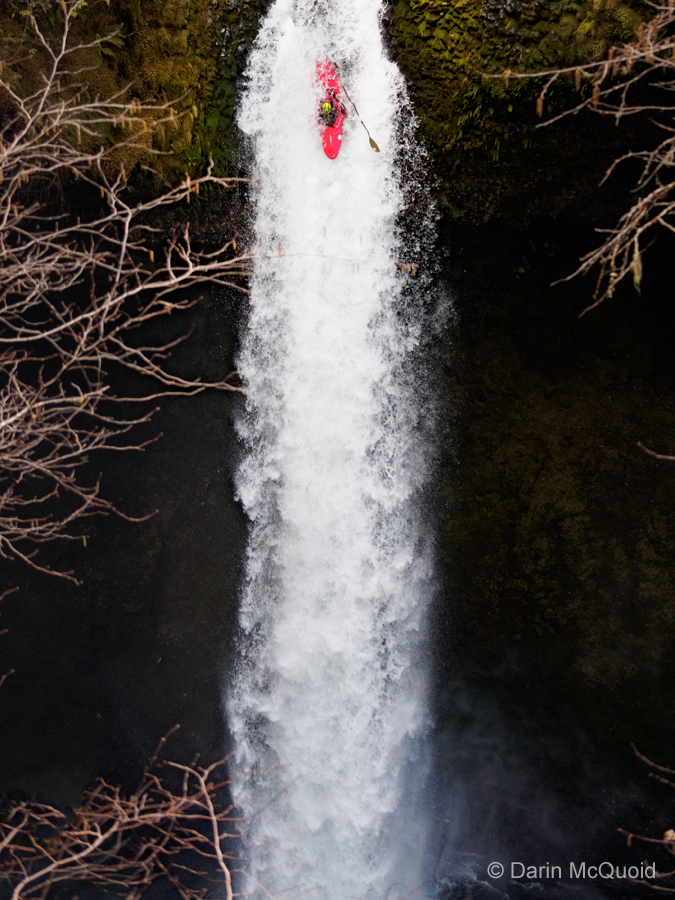 Quite a moment of freefall. 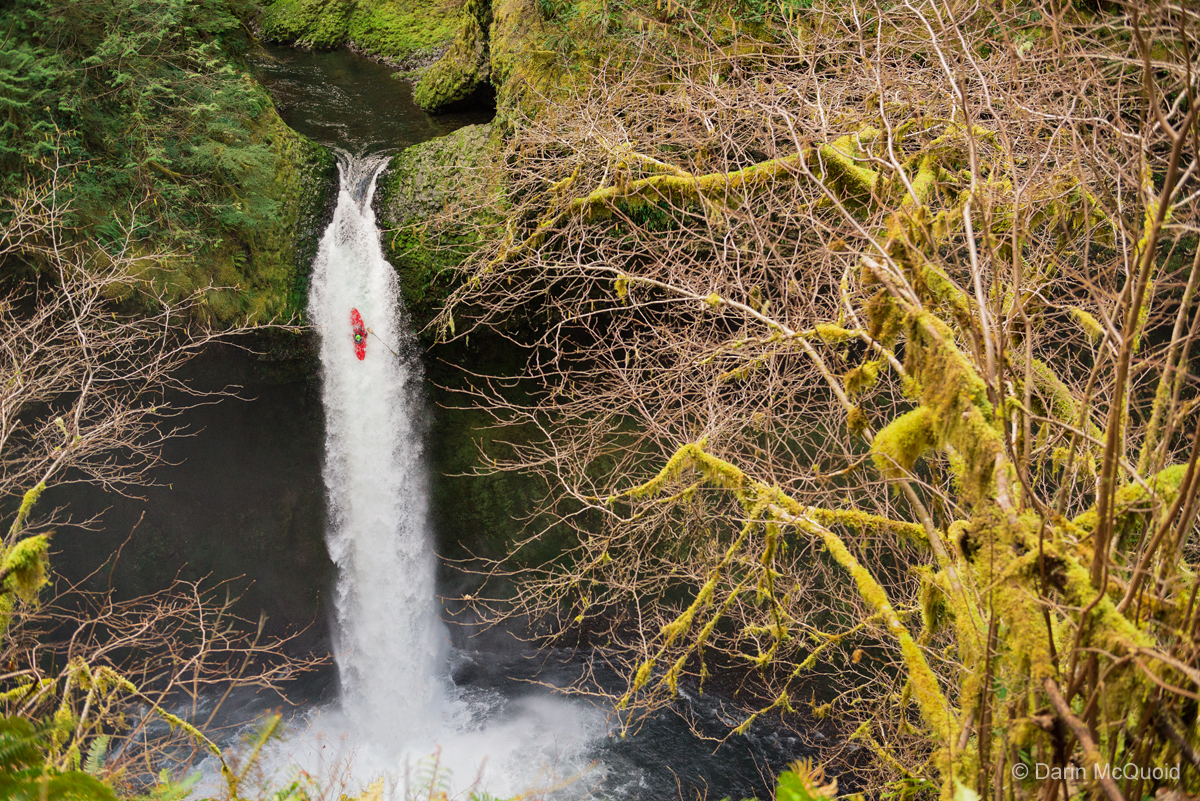 Hand rolling at the bottom, I wait for a signal from Jonas. Good or bad? He retrieves his paddle and moves across to where we can make visual contact. The marginal signal. The last thing anyone wants to see. I debate for a minute. Originally I'd hoped to rope my camera gear to the base of the falls so it wouldn't take a big hit. My throw rope is nowhere near long enough. Walk back out or run it with too much money of camera gear in the kayak? Laziness prevails, it's a lot easier just to run it. In the eddy above the falls it's apparent that indeed, this is a really big waterfall. Thankfully the line is so simple; the slightest right angle so the curler doesn't deflect you, hold it steady down the ramp into a nice slow paddle toss and tuck. It goes just as planned yet the impact at the bottom is impressive. Even fully tucked with my head half inside the cockpit (the joy of being small) my bell is rung. Later I find a cracked tooth from the impact. Yup, certainly marginal flow. The canyon downstream is beautiful and the impact doesn't hurt our euphoria. I'd written Metlako off as being over-rated, but it's a hell of an experience if not the hardest thing to run.


Jonas has been wanting Metlako for years; mission complete. 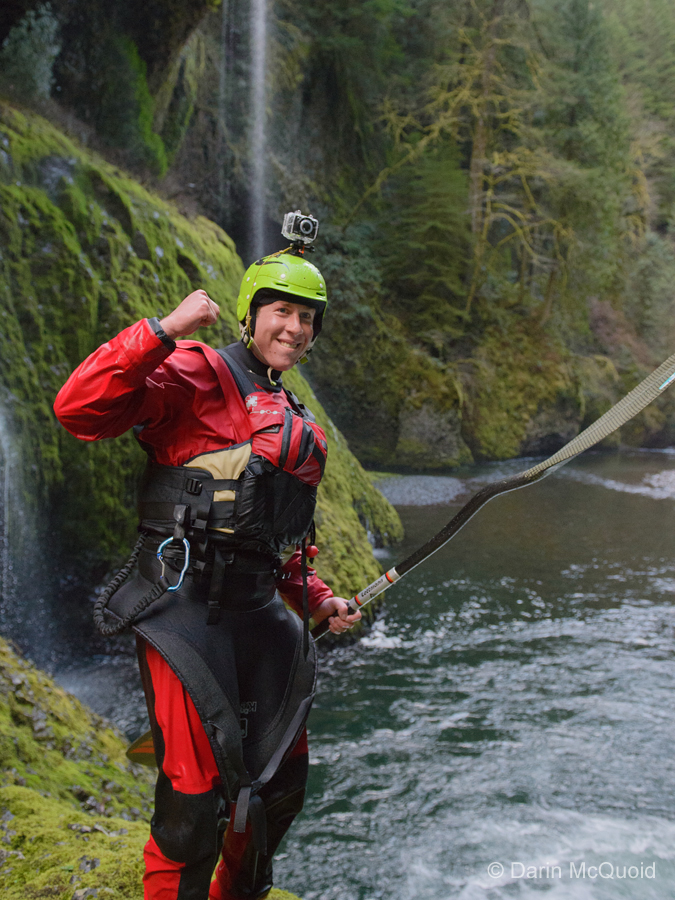 Now it's time to head up to Hood River and see what else we can fall off, perhaps even get a real day of kayaking in.