Once one of the most well known of Scott Valley creeks, our beta was limited to vague accounts of steep mank, wood, and something around twenty five feet with a log. Perhaps the most accurate beta I've heard was “it’s a mean little creek”. Matt Thomas and I both grew up in Scott Valley, but never picked up kayaking until we were living in other areas. We grew up swimming and creek hiking Shackelford so it was a bit of a home coming for both of us. Matt was down visiting for Easter, flows were acceptable and we were off to explore, expecting a fairly quick day.


Scott Valley is a beautiful and special place, here is the view looking up Shackelford creek, which drains several lakes of the Marble Mountain Wilderness Area. 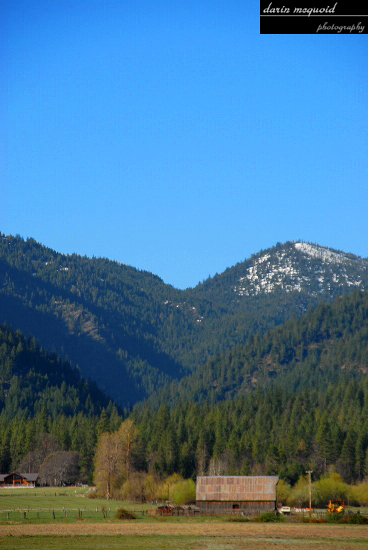 We quickly completed the straight forward shuttle and were putting on Shackelford and saw exactly what we expected, slightly low flows and lots of mank.


Matt Thomas on the first rapid of the day. 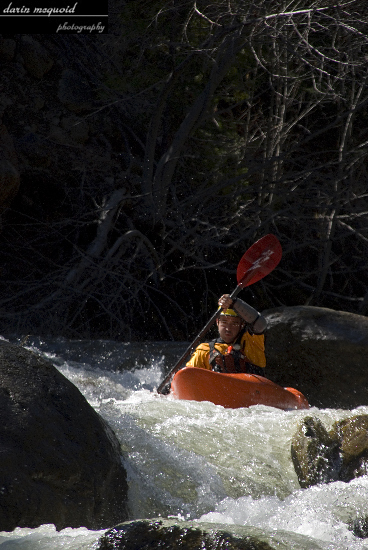 Here is Matt about halfway through the same rapid, which got rockier on the second half. 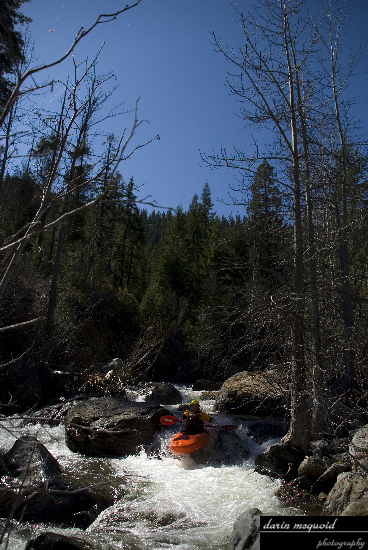 We hopped out of our boats to scout the next horizon line where the water split around a large rock in the center of the creek. The right side had some unfriendly wood, and from the top the left side looked ok, but closer inspection showed that about eighty percent of the water was going under the massive boulder in the center. We made a quick river level portage on the right and continued down through multiple river level portages and amazingly steep boulder gardens, staying optimistic about getting some bedrock drops in. The mank became rather mind numbing, but we made the most of it enjoying the scenery and shrugging off the occasional horizontal pin.
Matt and I were both grinning when we saw the first bit of bedrock on Shackelford, a nice rapid consisting of three clean drops.


Matt running the second of three drops in the first bedrock section. 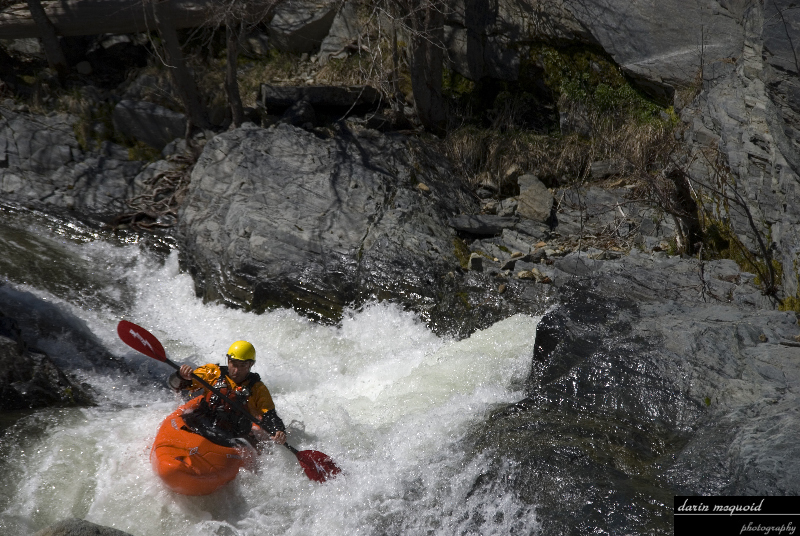 This rapid is great, here is Matt finishing it off, one drop is upstream around the bend and two more 4-5’ ledges were downstream of this one. 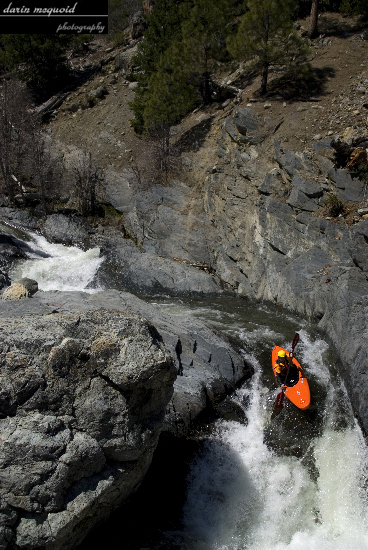 The bedrock disappeared after these two, but the rocky sections were both incredibly steep and entertaining. Within a short amount of time we were scouting a drop, which at higher flows must be the 25’ slide involving some intimidating wood. We didn’t like the look of it and took a lunch break after the portage.


Looking back upstream at the slide that has been run… 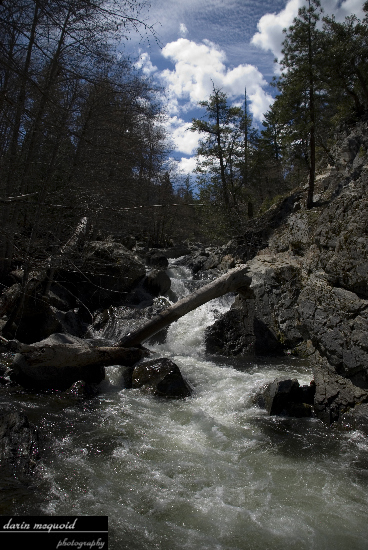 We ate quickly enjoying the California sunshine, and got ready to run the next rapid downstream. Looking upstream is the log drop pictured above, and the next rapid lies directly below with a very short pool in between, to give an idea of the gradient in here. The next drop was a super sweet slide dropping about 25’ and through a corner, it contained a large but easy to avoid undercut on the right. 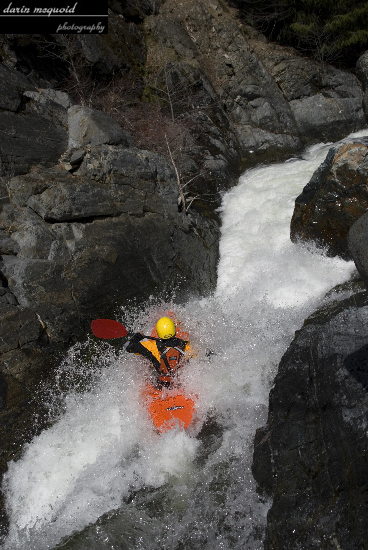 We were elated about the fun slide and in good spirits made quick work through more mank, then one stout mini gorge that at high flows would have really sticky holes, but was quite chunky at lower flows. In this section pictures started to become less of a priority as getting off the creek before dark moved to the top of our agenda. A blurred mix of rocks, portages, and monkey boating continued until we reached a big horizon line and got out to scout. At first glance it looked like the best rapid on the run, a sweet double dropping entrance into a twenty footer.


The entrance drops viewed from halfway down. 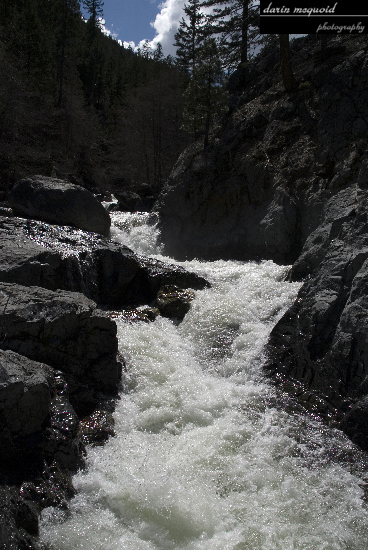 A sweet looking twenty footer viewed from the side. 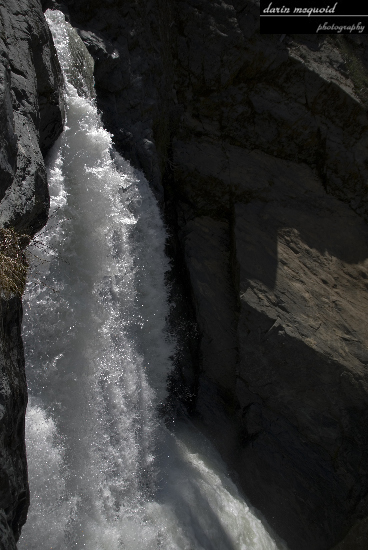 As we scouted our excitement started to die down as we noted the landing of the last drop, it went right into the wall only fifteen feet downstream and had an unfriendly room on the left. 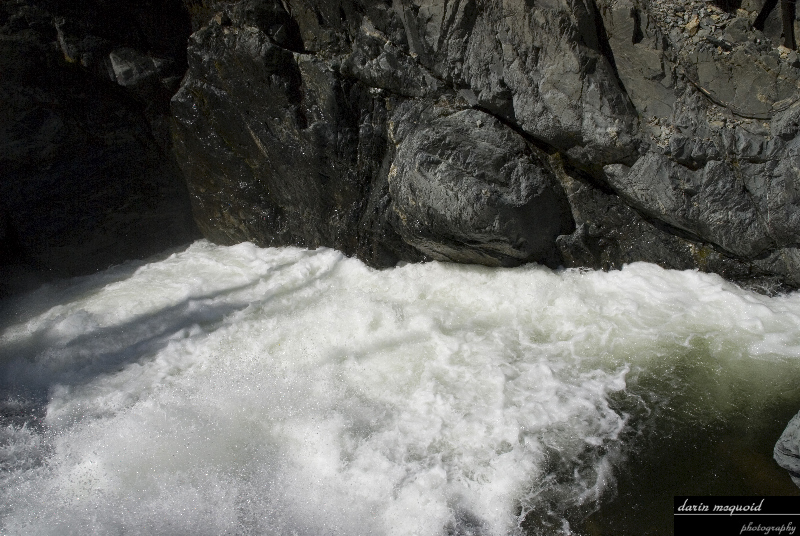 This wouldn’t have been too bad on it’s own, but the right side of the falls had a rooster tail spraying water almost all the way across into the wall. I thought it might be possible to hit the falls with some left to right momentum, land in the center but facing right at the bottom and use the momentum gained to jet across the current and escape the room. Even closer inspection of the lip made this move really marginal, because the hole upstream of the drop fed to the right, making it very questionable to achieve any left to right momentum across the lip. We decided to let this one go today, at higher flows I think the rooster would be gone and it would be a sweet drop to run.

Downstream the creek went back to a steep boulder choked character and we laughed about Shackelfords bad attitude. We had started off the day doing things right, scouting every drop that we couldn’t see the bottom of, but by this time exhaustion was setting in and the afternoon was wearing on quickly, and we were boat scouting drops and running lines where one of us would say “it probably goes on the right…” Thankfully everything did go, although this lower section is just as chunky. One more nice bedrock slide was run and we eventually made it to the take-out, surprised at how steep and long this run is. Matt and I opted not to run the take-out falls, an infamous little fifteen footer with a mean room of doom that has tragically claimed the life of both kayaker Jeff Ellis and a number of local swimmers over the years.
Three pins and countless rocks later, I wouldn’t consider this run a classic by any means, in Scott Valley both Upper Kidder and Patterson Creek blow this one away in terms of quality drops to mank ratio, but at the same time I know I’ll be back on it after I’ve had few years to think about the good drops and forget the bad…these memories will be sweeter than they seem.

Logistics: Shackelford Creek has easy shuttle logistics and the road is generally open although occasionally washed out. From I5 North take Yreka South/Highway 3 Exit, turn left at the bottom of the off ramp and left at the stoplight. Continue on Highway 3 until you reach Fort Jones, turn right on Scott River road (across from the gas station and immediately after Ray’s Market). Drive down Scott River Road for seven miles and make a left on Quartz Valley road. Follow the paved road over a bridge (Scott River) and cross another bridge (Shackelford) and for several more miles until you cross Shackelford again. After the second crossing keep your eyes peeled for Shackelford Creek Road, a right hand turn. Follow the road for a few miles until you cross the creek, make a left turn on the small side road fifty yards after crossing. Go up this little road two hundred yards and this is your take-out at Shackelford Falls. Go back out to Shackelford Road and go left, staying left the whole way. The road climbs above the creek but eventually drops down, there is no official put-in, just go for where access looks the best.


Scott Valley scenery on the drive back out. 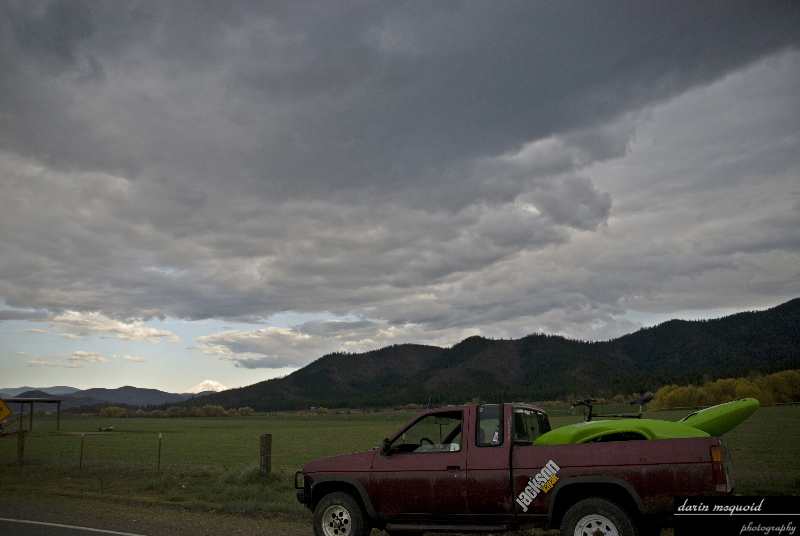 This shot does it more justice, Mt Shasta with some nice afternoon glow. 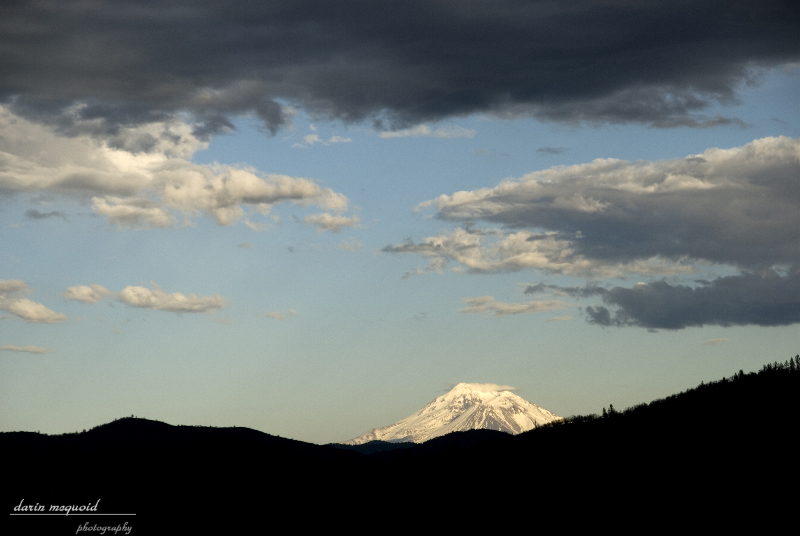