The Feather River varies the remote and pristine Middle Fork, to the North Fork, which has a highway on one side, train tracks on the other and plenty of dams too. The West Branch falls in the middle, while the shuttle is literally through the town of Paradise, and at one point there is a hospital not even a quarter mile off the river, the run itself has a rather remote feel with good water quality and committing mini-gorges.

The run starts off with a nice warm up of class IV before making a gradual transfer to easy V, and after perhaps a mile, the first portage. A gradual class II entrance quickly gains momentum, turning into a large, marginally run-able cascade. The portage is from the top on the right. 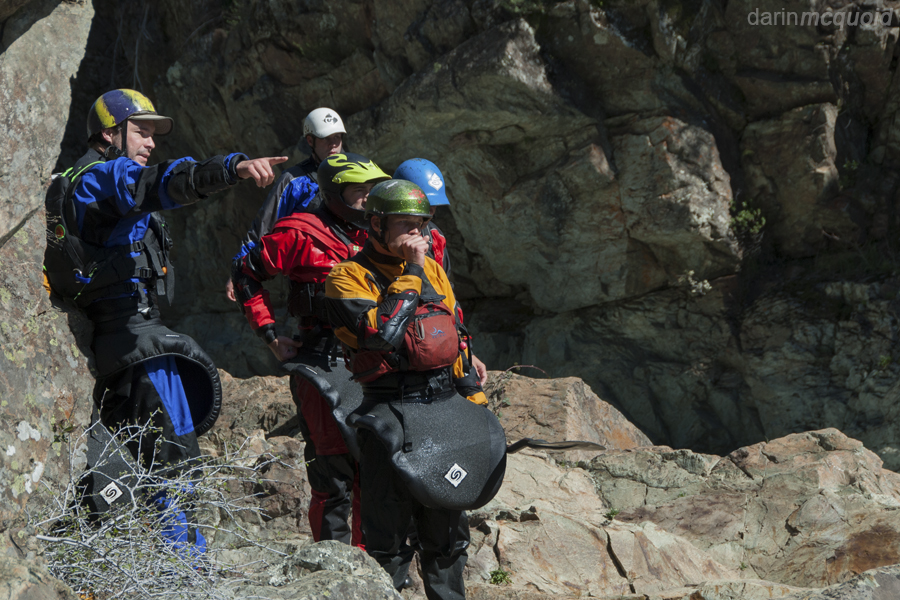 Looking back upstream at the portage. Not sure if it's ever been run, I always pick up my boat and start portaging. 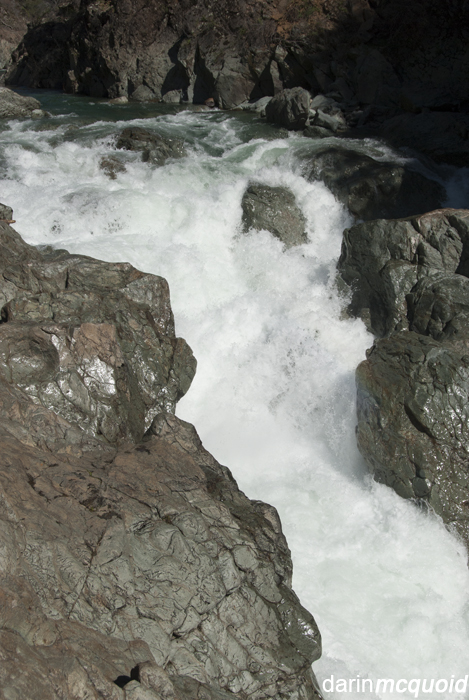 Without this small ledge, the portage would be a heinous affair, so Danny Salazar is happy about the presence of the ledge. 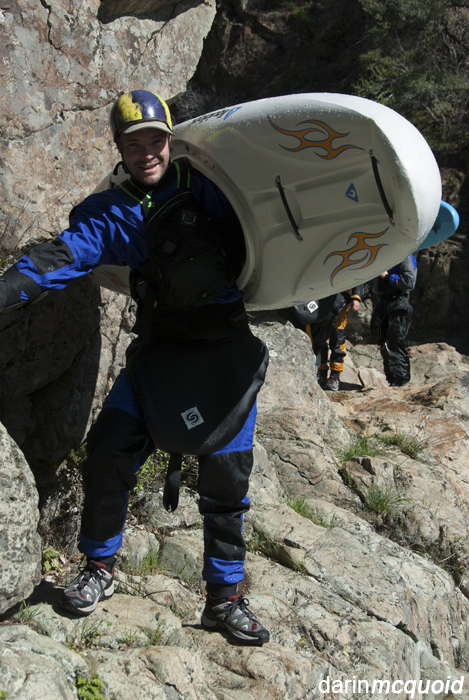 Skirting a small patch of poison oak is the hardest part of the portage. 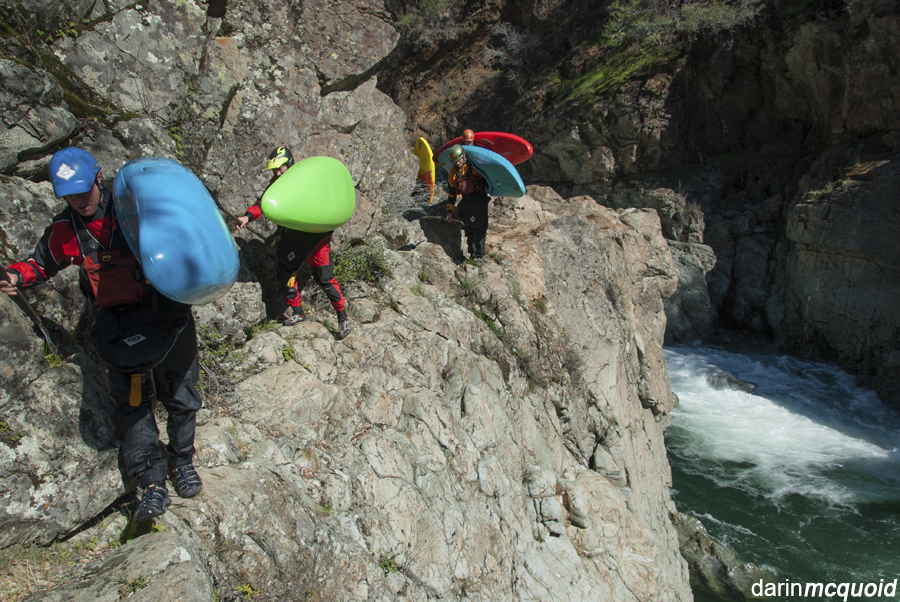 Ben & Jerry's Gorge is not the deepest gorge, but in several sections it's a committing mini gorge with no escape routes. Excuse the bad lighting as Danny Salazar and Jared Nocetti drop into the first mini gorge. 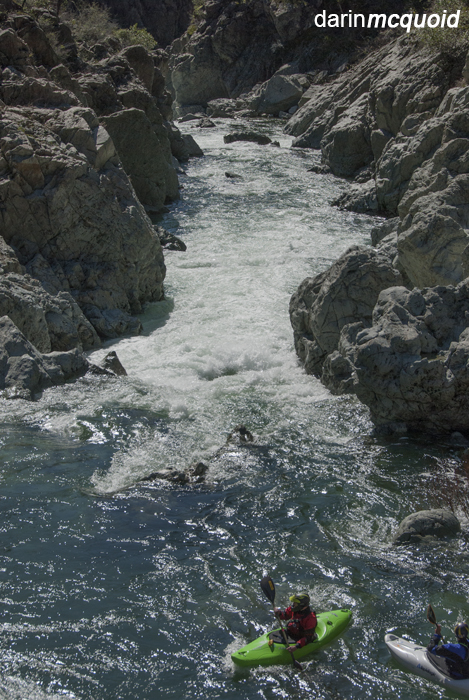 What follows is a tricky inescapable two set. Offset rocks block what would be an easy route in the entrance. Water pushes right, while the line a move to the left.


David Maurier making the crux move in the first drop, which at higher flows contains a notable hole. 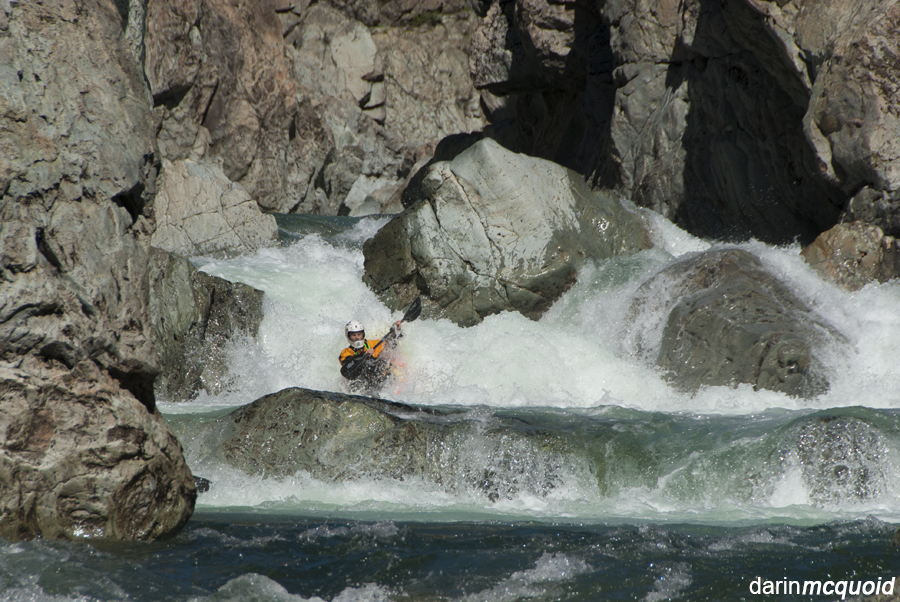 Once below the first move, you are "in it to win it". I have fond memories of assembling a Lendal breakdown while clinging to Chris Korbulic's boat, bobbing in a surging eddy while he held onto the only hand hold after his paddle had snapped in the entrance. All because the downstream ledge varies from moderately retentive to highly retentive, not a place to hand paddle.


Thomas Moore is sure to boof over the ledge. 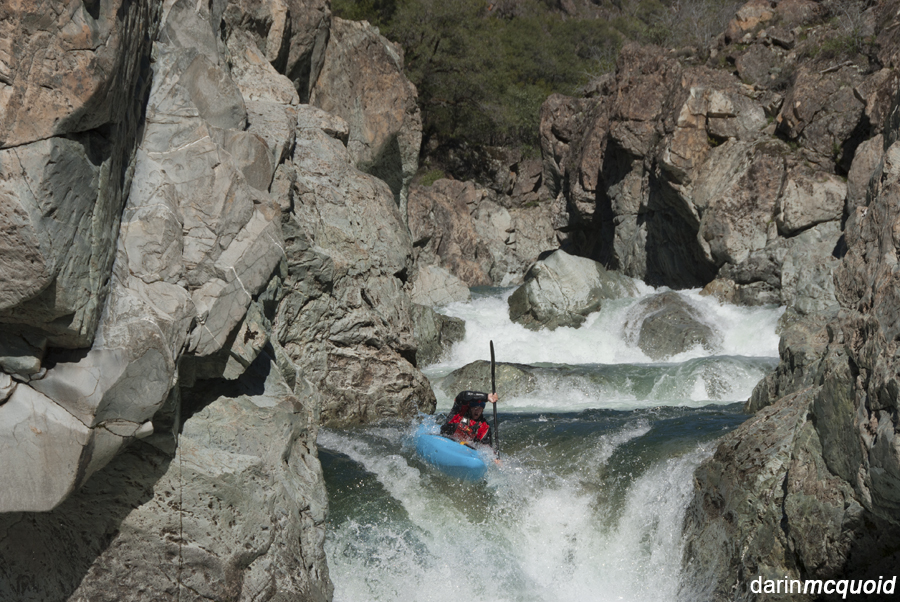 The gorge may not be tall, but it's locked in. Ben Wartburg boofs out of mini gorge #1. 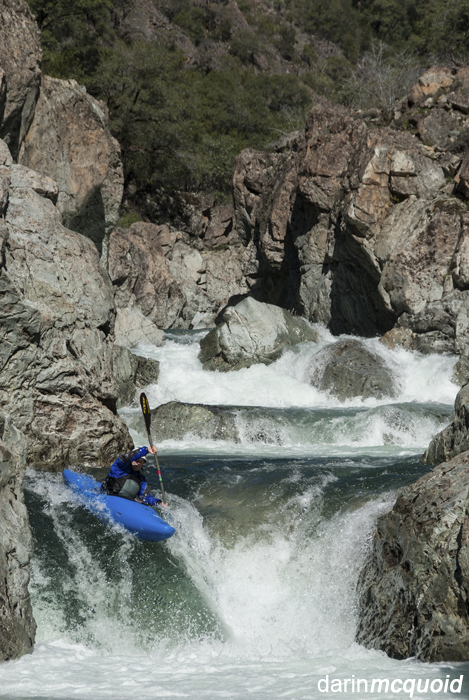 The first gorge is short and sweet, ending in a pool to collect swimmers the ledge may incur. Then the West Branch opens up, although typical to all Feather Country, the canyon walls are steep and infested with poison oak. A few larger rapids are interspersed throughout the open section.


David Maurier boofs into China One. 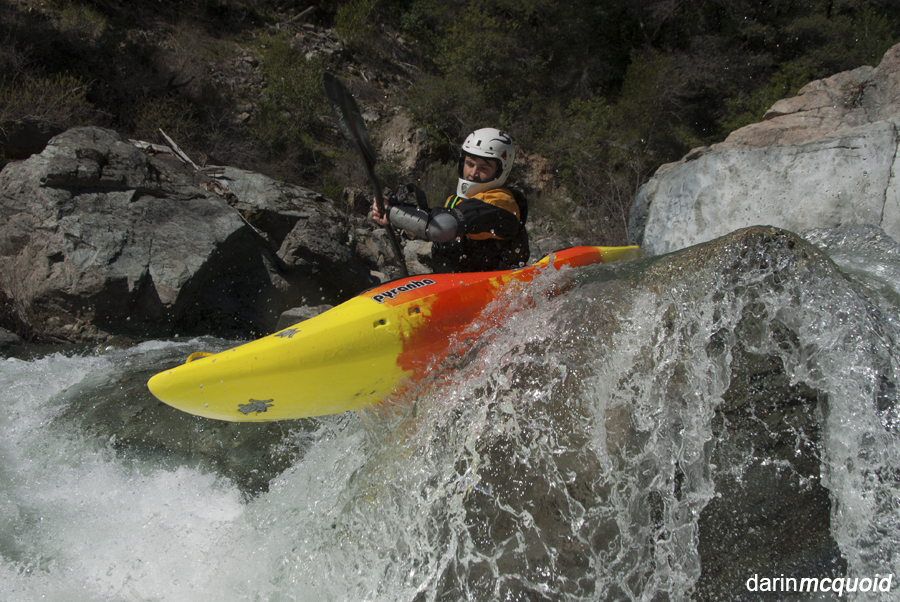 From afar, Nick boofing into the same. 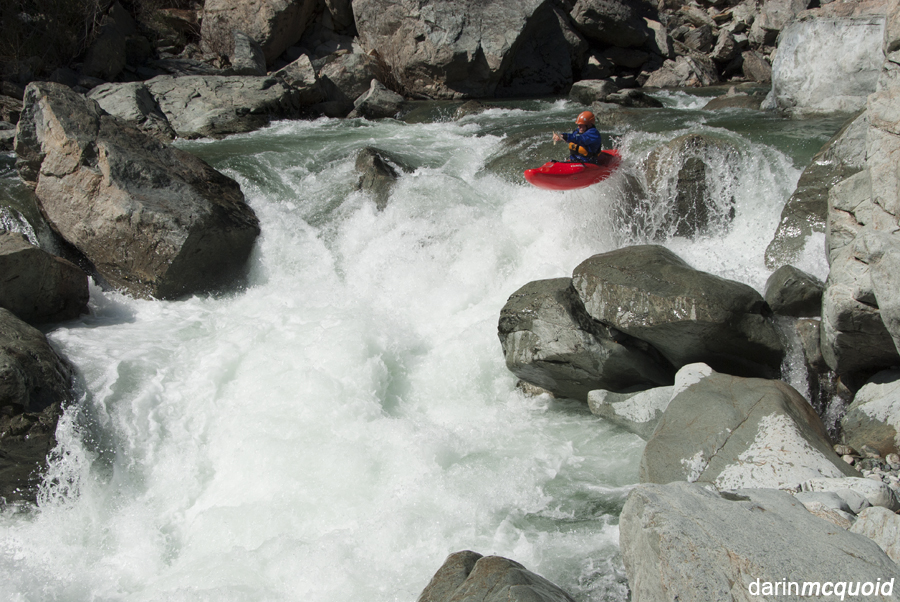 There is a good bit of nice class IV in the open section. Thomas Moore. 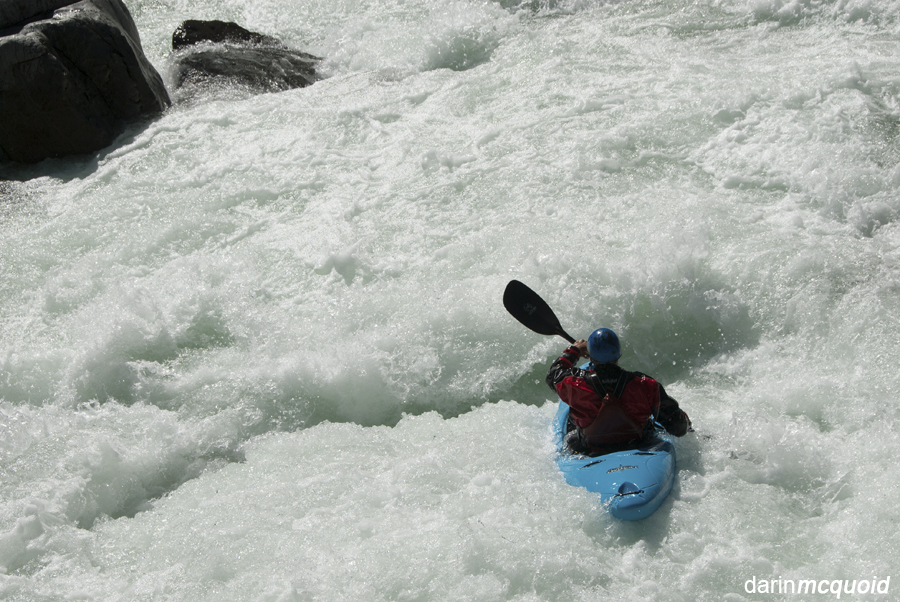 As the proverbial belt tightens, be on your toes for another quick portage. This one has a tempting lower eddy that is hard to catch, the small, less obvious upstream eddy is the safe choice. 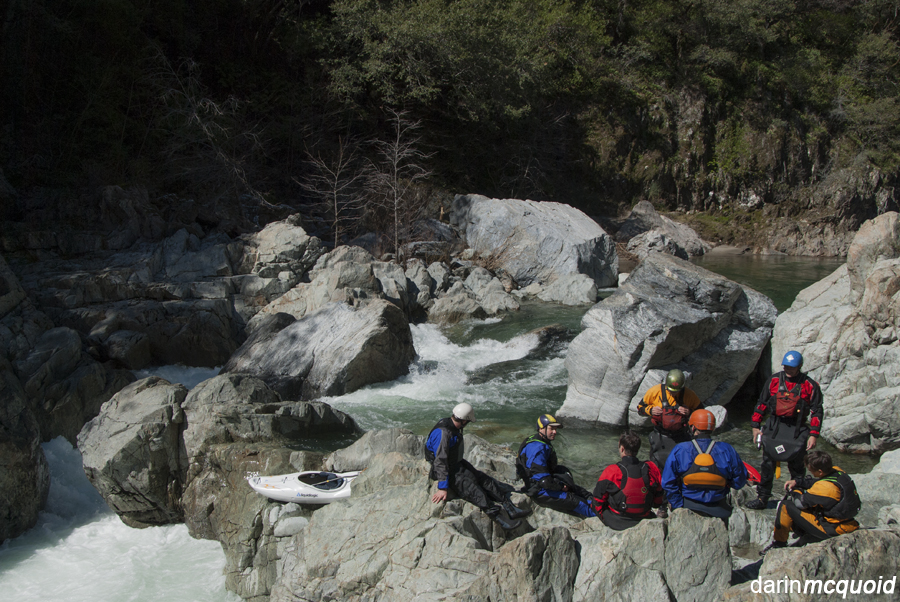 Ben and Jerry's saves the best for last, with the hardest rapids of the run lying deep in the final gorge. Portaging options are minimal on most rapids, and some channels dead end, this is where the run earns it's reputation. 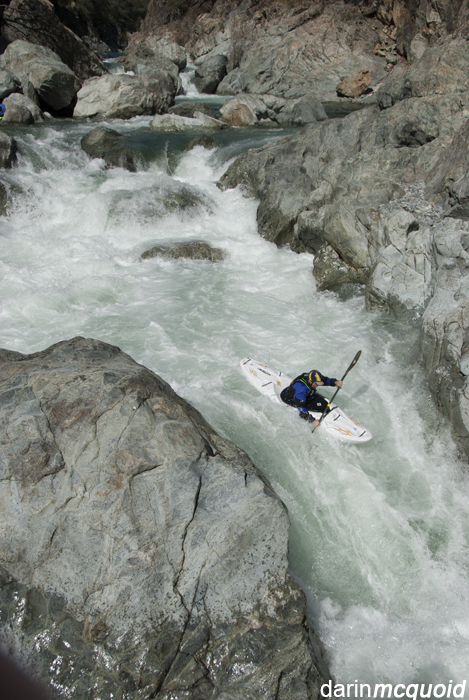 Thomas Moore buried in the crux. 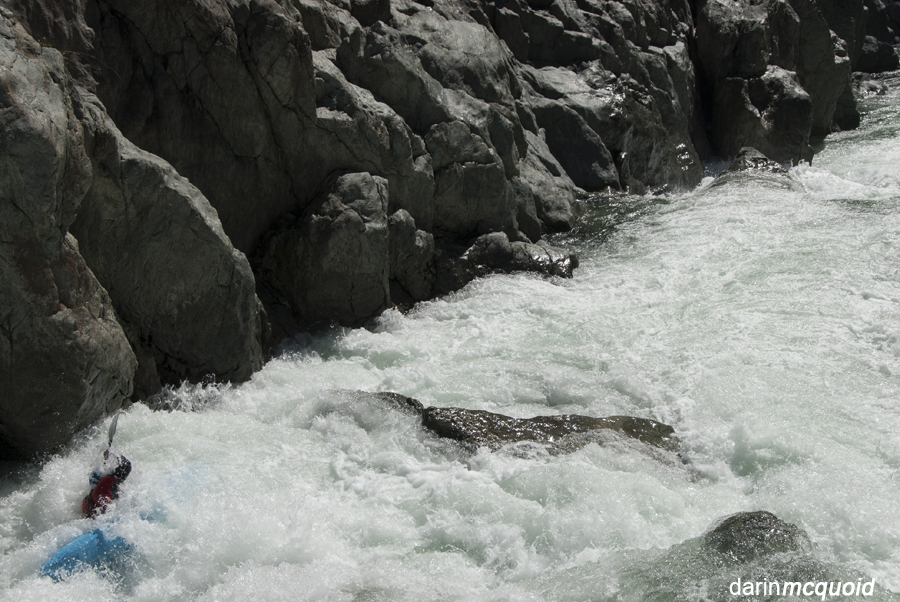 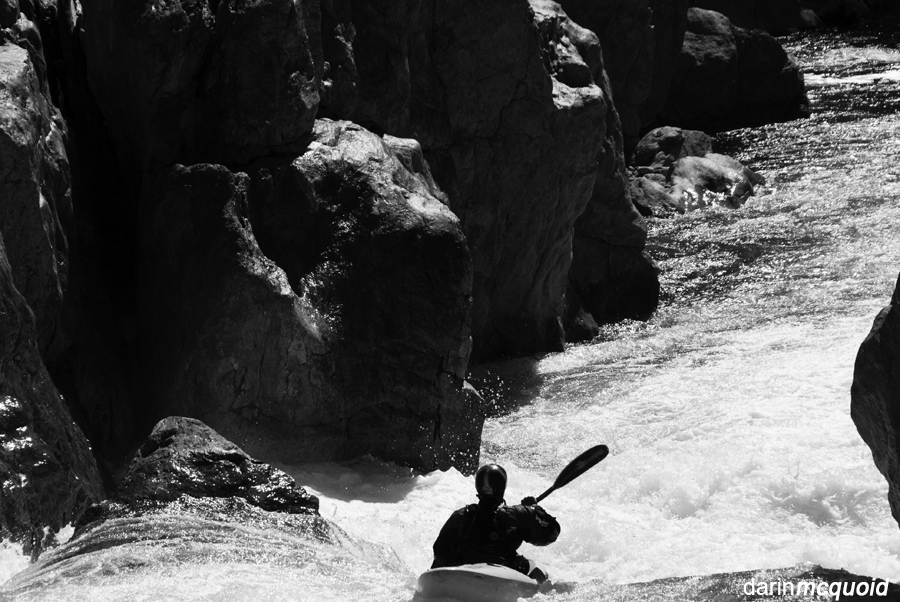 Below the largest rapid there are still several significant cascades. One of note is a two tiered drop, with the first tier being run on the far left, and the second required a strong ferry across to river right avoiding a large hole in the center. A recent rock slide has changed the line here, and the right side is now a pile of rocks, but thankfully the new line through center hole flushes more than it used to.

If the reservoir is full, the paddle out begins below this rapid. If the lake is at ideal levels, there are still a few more big rapids. Some years the lake is low enough that the West Branch flows all the way to the boat ramp. Tragically this also uncovers "Slam Hoggin" a mean V+ mess. The portage is a tedious affair in the bathtub ring of the lake.


Dave Maurier hikes out from ideal lake levels, maybe a mile and a half paddle out with no Slam Hoggin. 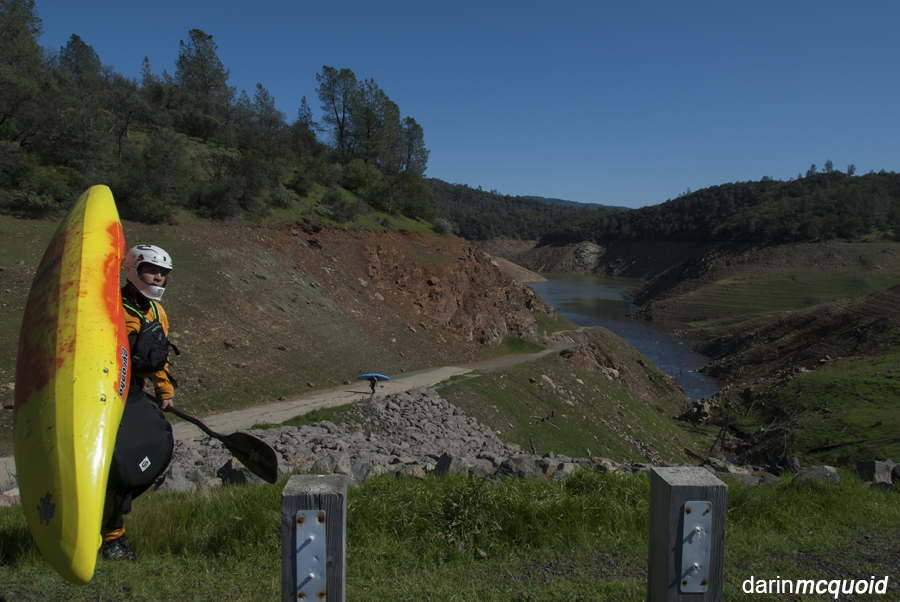 Ideal flows are 350-550 at Whiskey Flat Bridge. The run has been done as low as 300 and as high as 700. Shuttle is accurately described in the Best Whitewater of California.